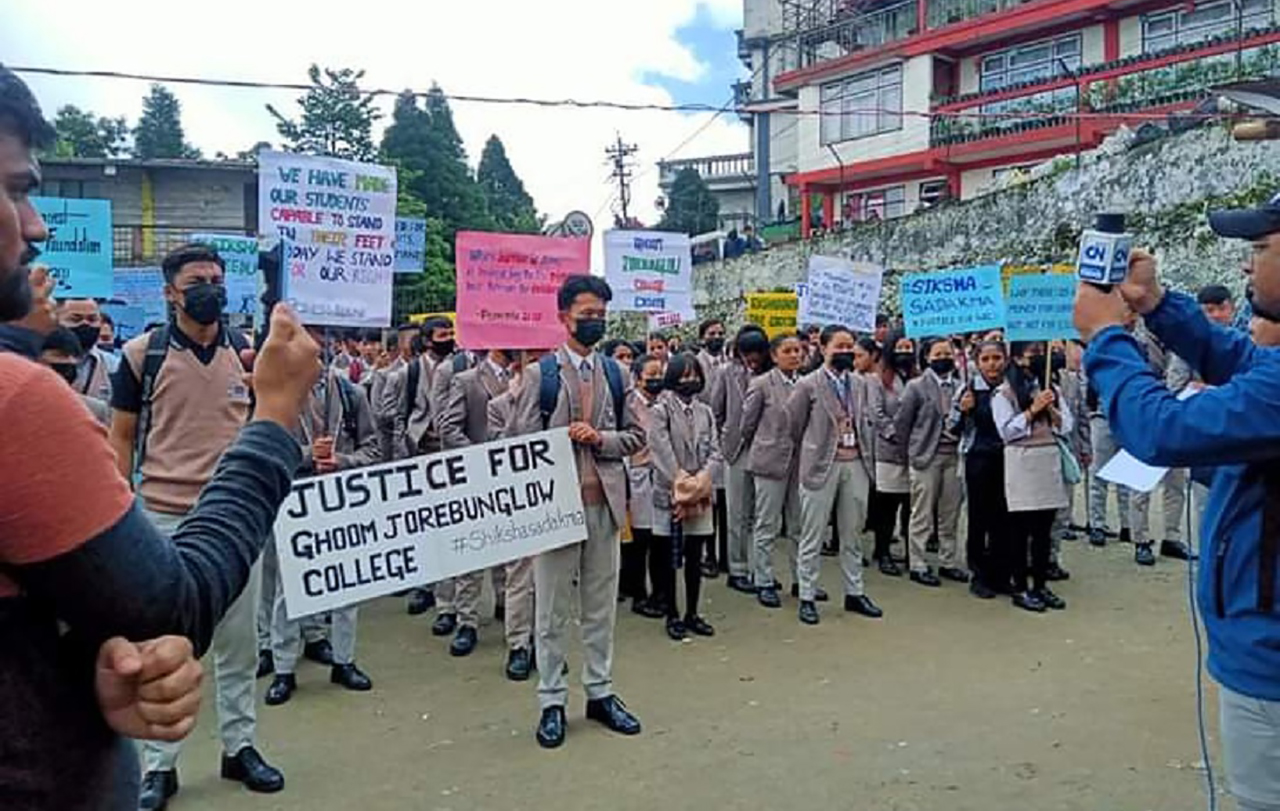 The teaching and non-teaching staff along with the students of Ghoom Jorbunglow college in Darjeeling district went on relay hunger strike demanding recognition of the college as a state-aided government educational institution. A report by Sumendra Tamang.

The teaching (28) and non-teaching staff (9) of Ghoom Jorbunglow college in Darjeeling district are on protest demanding its recognition as a state-aided government college. They observed ‘pen down’ on 29th April, 2022, and later on from 6th of May started a relay hunger strike to press for their demand. This college was founded under the Darjeeling Gorkha Hill Council in 2004 and was later transferred to Gorkhaland Territorial Administration (GTA). Both of these autonomous bodies have failed to run this college in a transparent and democratic manner. Ghoom Jorbunglow college is affiliated to North Bengal University but its administration is extremely inefficient and the college ill-managed. When some of the teaching staff questioned the nature of their employment which right now is contractual, they were told to think of this college and their job as a stepping stone or apprenticeship/internship for their future (real) employment or in simple language consider it as ‘experience gaining opportunity’. There is no proper process of recruitment and no permanent teaching staff in this college. The pay scale is extremely low for a public college. Its infrastructure and administration needs to be taken care of by the government as most of the students are from tea gardens and far-away villages of Darjeeling. With so many students and only a few government colleges, this college needs to be run properly and transparently so that students from marginalized backgrounds in Darjeeling can avail and afford public education. After all, access to education is the most important and basic fundamental right of every citizen irrespective of their class, caste, religion, gender, sex etc.

Looking at the volatile situation of Darjeeling where election to GTA have been announced, this movement of Ghoom Jorbunglow college teaching, non-teaching staffs and students will act as a litmus test for political realisation on peoples part and more intricately on the part of political parties of Darjeeling. The realisation being education to be understood as a basic human right and not as a form of any pre-attained privilege and the need to fight and raise voice against all forms of corruption, nepotism, privatisation and political appropriation of the education system happening around our very own eyes. This movement is an indicator that resistance is slowly ripening and more centrality and importance is being pressed upon the nature and terms of employment for any sort of labour and services. This college and its teachers have been facing this problem since its very inception. They are fed up with being sandwiched between the institutional inefficiency of so-called autonomous bodies such as DGHC and GTA and the indifferent attitude of the West Bengal government. Their call of protest being #Shiksha_sadak_ma which translates to ‘Education is on the Streets’.

It’s time that the issue of education also becomes a central social and political agenda for the people of Darjeeling and this country as the dropout rate of students especially from marginalized sections of our society has been constantly rising with rampant cuts in public funding and privatisation of education. In order to change our future we must act now to strengthen the education system or else it will be too late and the damages will be extremely regressive and lethal for generations to come. 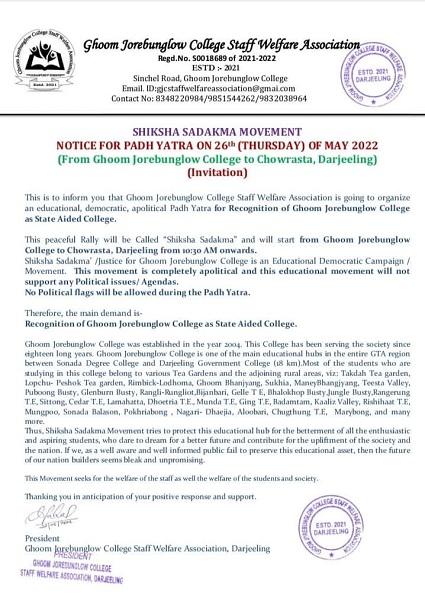 On 26 May, 2022, the students and teachers of Ghoom Jorbunglow College took out a ‘padayatra’– a street rally —  with the slogan #Shiksha_Sadak_ma which roughly translates to  “Education is on the streets”. Students from Siliguri College, members of civil society and activists joined them in the rally. The rally was planned to end with a protest demonstration at Chowrasta. But the police administration, at the last minute, allowed the rally to continue only till Batasia, citing medical emergencies, traffic jams etc. Nevertheless, many political party’s rallies were allowed. On the same day, a rally of a political party started from Darjeeling station. As the election fever is on the rise, there have been many other rallies since then and all are allowed. Even after attacks on students outside college and multiple instances of threat and intimidation, the students and teachers of Ghoom Jorbunglow College continues to fight. There was an attempt to convince the students, workers and teachers of Ghoom Jorbunglow College when they were called for a meeting with the GTA officials but it failed and demand remain unsettled. After the notification for GTA elections were passed by the West Bengal, and since the college premise would be used as an election booth for GTA elections, the students and teachers of Ghoom Jorbunglow College had to suspend the hunger strike. However, the protest will continue in other forms during this period. The teachers have also momentarily called off the hunger strike due to the coming exams starting from 21 June 2022. Many students and teachers have said that the relay hunger strike will resume after the elections are over. Caught in the quagmire of privatisation of education and corruption of administrative bodies like GTA, the education system in Darjeeling seems to have become a tool of partisan politics and control of student cadres.

The fight for recognition as state aided College status for Ghoom Jorbunglowhas has once again been overshadowed as the pitch for GTA elections continue to rise. But the political abstract from the movement is quite interesting. This movement has proved that the Gorkhaland Territorial Administration is flawed and has serious limitations. After all GTA is nothing but a corporate like administrative body, a middleman which thinks that it is autonomous, but is actually controlled by ‘the masters’ sitting at Nabanna. This movement has once again put the bare truth in front of us, that such GTA-like bodies cannot fulfill the aspirations of the students, teachers, non-teaching staff of this college in particular and the people of Darjeeling in general. Unless and until this college is recognised as a state government aided institution, nothing can change the fact that the GTA and the West Bengal government has failed to keep their promise of ‘Pahad Haschey’ — the ‘hills are smiling’.