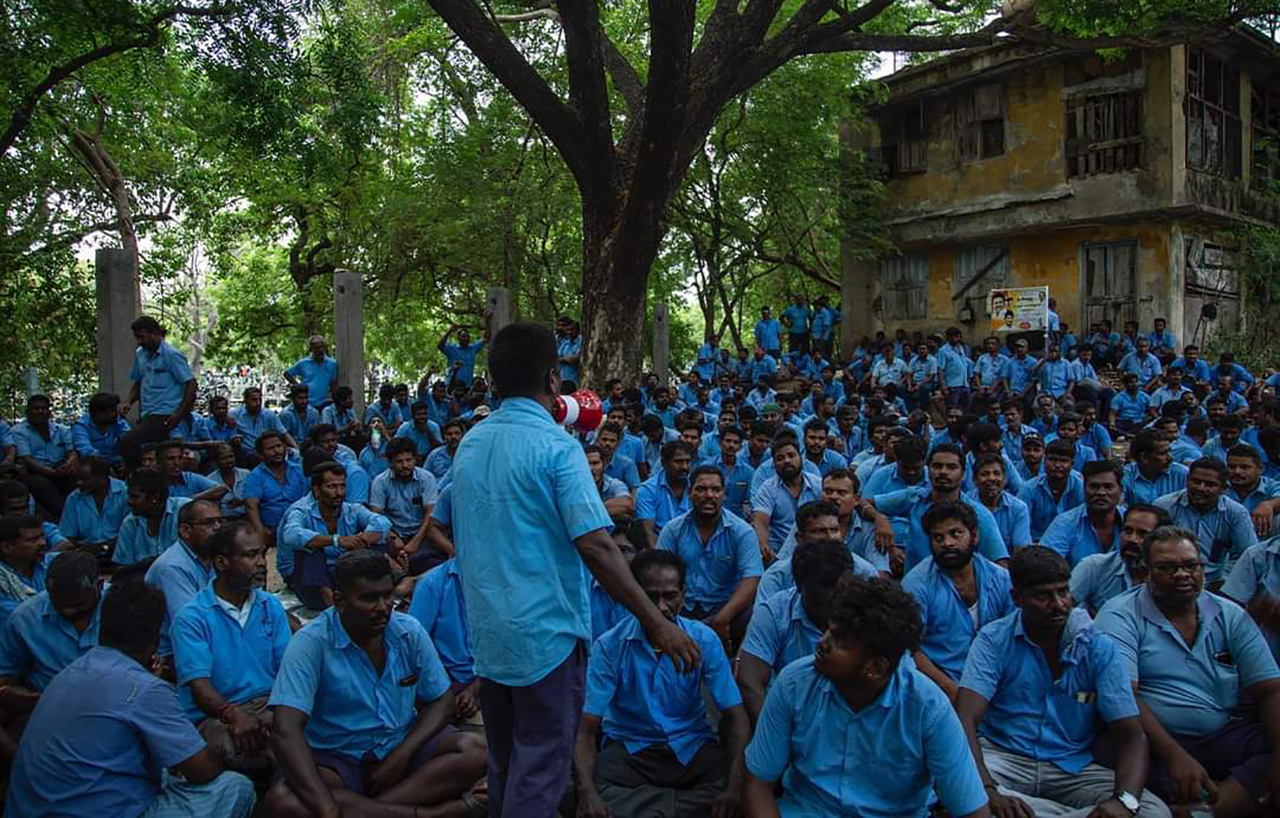 The 10-day strike by sanitation workers in Chennai

About 1800 sanitation workers in Chennai went on strike for 10 days from 16 May. The temporary workers were protesting the contractualisation of their job and demanding that they be made permanent workers. A report for GroundXero by Raju K and S. Karuppasamy.

The sanitation workers of Chennai Metro Water Supply and Sewerage Board had refused to go to work and have been on strike for 10 days since the 16th of May inside the campus of the Urban Administrative Office at M.R.C Nagar. Their main demand was to abolish the contract system and make them permanent employees of the board.

The board is responsible for ensuring supply of water for the metro city and for this purpose it has its depots at various places of the city which are divided into different zones. Since its inception, the board has been following the practice of recruiting temporary employees. Only a few amongst them were later made permanent and that too was done for the last time in 1997. At present there are about 1800 temporary sanitation workers employed under the board and many of them have been working for about 15 to 20 years. Despite working continuously for so many years they still have neither a permanent job nor a fixed salary. 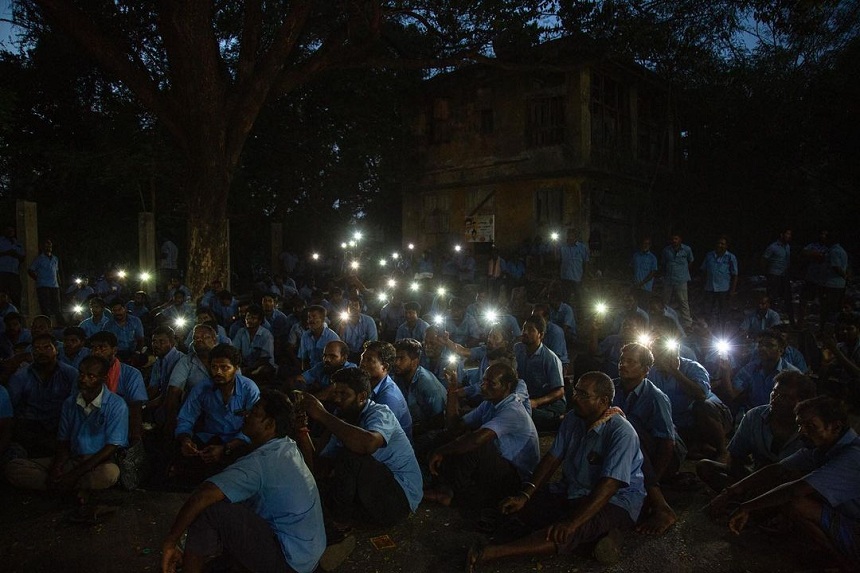 Background to the strike?

To the shock of the employees, the board recently announced that all temporary employees have been made contract employees from 2021 itself. The reason for the shock was that the employees were never aware of any such contract and they still receive salary as temporary employees of the board. This ambiguity about the nature of their employment left the employees worried. The workers complain that the problem of working as a temporary employee or under contract, means that they don’t receive a fixed salary. The officials deduct their wage even if they take a one-day leave. They say that the salary they are given in hand is less than what is entered in the record and the difference is going into the pockets of either the board officials or the contractors. They say that when any employee raises questions about such issues, he is threatened by the officials that he will lose his job. Thus, besides any kind of job security, these workers are kept at the mercy of the officials and are deprived of various rights, including the right to unionise and raise demands.

Jet rod machines can be used only in places where the jet rod vehicles can pass through. In most of the slums, the jet rod vehicle cannot enter. These  jet rods might hit the handlers if not handled with care. The rods have to be precisely placed in the drainage hole, if not, it would hit the operator by bouncing back. Many workers have died while working in accidents without any compensation. Despite such grave dangers, these employees do not have any kind of social security coverage like PF or ESI.

The drainage holes have silt that includes sand and stones. The silt removing machines would have faeces sticking to the rope; the workers have to touch and handle the ropes. No gloves or safety equipment are provided to them. Safety equipment is provided only during special occasions like a  minister’s visit or when high government officials like ED’s, MD’s come for inspection. The AE (Assistant Engineer) has some sets of safety equipment kept ready for such occasions to show off to the officials that safety equipment is provided to the workers. The safety shoes that are provided would be of no use since each shoe weighs more than one kg and are uncomfortable for the workers, and also they don’t fit most of the workers. Wearing those shoes on such particular days only hurt and burn their feet.

The composition of the executive committee of the board consists of a Chief Engineer, Superintending Engineer and Area Engineer for one zone, along with DAE and their assistant (One DAE for five wards). Usually, the salary is paid to the temporary workers by AE, the board would give a cheque in the name of ward AE or DAE for providing monthly salary to the workers. The workers will sign over stamps to collect their salary. During the last meeting, the SC said that the workers are under contractors from February 2021, while the workers are still receiving their monthly salary from the board.

Till March 2022, salary was given to the temporary workers by the board with the workers signing on the voucher and stamp paper, but the salary for April 2022 was not paid till May 25, and it was said that the salary would be given by the contractor. Usually, these workers get their salary by the 15th of a month. When the workers raised the question of non-payment of salary for the month of April, the officials told them that they would be paid by the contractor, as they have been brought under contract system. This was done without the worker’s consent. After this was communicated to all the temporary workers, the workers approached and petitioned all the board officials, the local MLAs, the ministers and the Chief Minister of the state. Even after approaching Stalin, the Chief Minister, they were made contract workers. To express their discontent and raise their demand, the workers started a strike on 16 May outside the Urban Administrative Office without affecting the public. 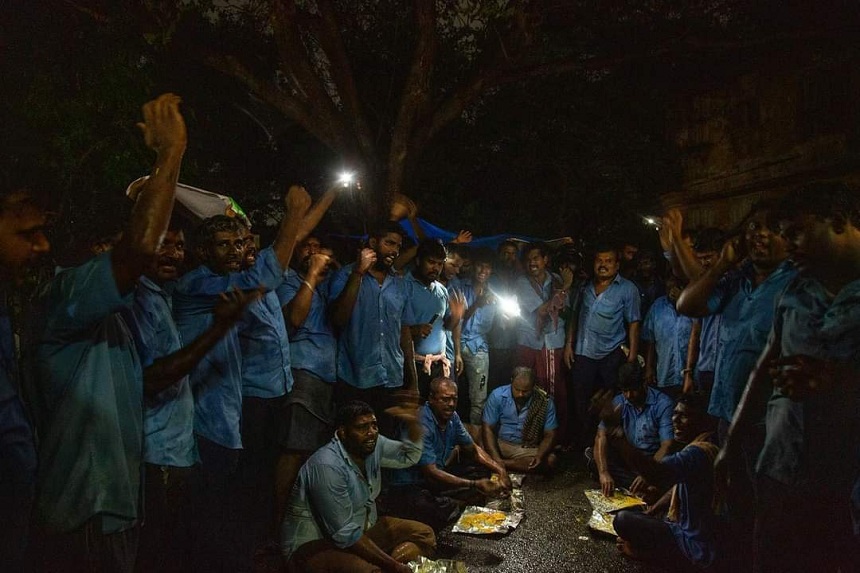 Initially the board management used the police force to disperse the workers from gathering. As the workers were resolute in their stand and also some public support was behind their strike, the administration had occasional conversations with the workers on the 1st day, 4th day and 8th day of the strike. Meanwhile, all these workers were threatened by their officials to abandon the strike and join work or they would lose their job. Still the workers with strong resolve continued the strike. On the 4th day of the strike, the SC has said that the board doesn’t have the power to make them permanent workers.

On the 8th day, the management was ready for negotiations at 10 pm inside the administrative office. The conversation started at 10:30 pm, all the cameras in the office were turned off. The board said that it needs time to make the workers’ permanent, for now the workers will have to continue to work under contract with PF and ESI. The workers urged the official to cancel the contract and give them salary, PF, ESI, and other benefits as employees of the board. The officials refused to accept their demand for permanency. Though many attempts were made by the workers and the news of the strike was shared on a massive scale on social media, the DMK government didn’t give any response to the workers strike. Many political party leaders including the Member of Parliament, Mr. Thol Thiumavalavan who is also the leader of VCK party, visited the striking workers and expressed their solidarity for the strike. Thiumavalavan himself being in coalition with the ruling DMK party, tweeted that the issue has been taken to the Chief Minister by him. Yet the government continued to remain silent about the CWSSB workers strike, which the workers felt as a kind of ‘untouchability’ being practised by the state towards them. Withstanding all the hurdles like non-availability of food and funds, the workers continued the strike demanding cancellation of the contract system and making their jobs permanent, which they are doing continuously for many years. 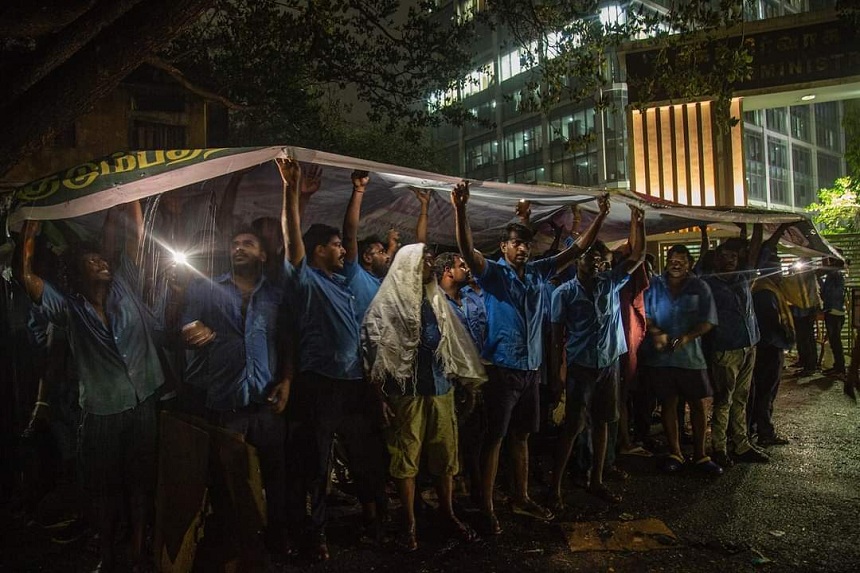 The strike was withdrawn after 10 days, mainly under coercion and due to the complete unwillingness of the management to negotiate. All that they were willing to concede was that a proposal for making them permanent will be sent to the state government for consideration and workers would have to wait for three months. The board management have assured timely payment of salaries without arbitrary deductions, payment of salaries to bank accounts, maintenance of proper attendance and work allocation registers, regular PF-ESI remittance, action against contractors or Area-Engineers who mistreat workers and violate contract conditions, immediate redressal of workers grievances at depot level, no retaliation against workers who went on strike. The management also assured the workers that their wage for 10 days of strike will not be deducted from their salary.  Accepting these interim commitments, the workers decided to return to work.

There have been complaints of vindictive attitudes from AEs/DAEs at some depots, despite a circular said to have been issued by the MD against such attitudes. Workers have seen this circular but don’t have a copy in their possession. Some also have pending wages for last month but have been told everything will be settled before next week. The strike/struggle committee of leading workers plans to meet the MD again next week if these individual grievances remain or intensify.

This strike seems to have set off a lot of solidarity action and protests in other districts too. Calls have poured in to the workers from across districts, from different sections of sanitation workers. All of them are affected by casualisation and contractualisation at every level from municipal corporations to panchayats. Many were literally saying they had pinned their hopes on the strength of this strike and were expecting the government to relent. There was even a flash strike in Vellore District by sanitation workers, predominantly women, under the Municipal Corporation. Their demands were for wages as per Minimum Wage norms and regularisation of jobs.

There’s an accelerated push toward contractualisation of work, and worse, privatising and commodifying even perennial essential services. The scam of “Public-Private-Partnership” model too has become unnecessary these days, because as a matter of state policy, there’s an aggressive push towards outright privatisation and commodification of even essential public services. Even the judiciary refuses to intervene and direct the executive to implement labour laws regarding job permanency of the workers. No wonder, the DMK government, which in its election manifesto had made tall promises of regularisation of casual jobs and making temporary workers permanent, has been making drastic U turns. In Coimbatore District, for example, municipal water supply and distribution is on the verge of being taken over by Suez Projects Pvt Ltd, which the DMK was staunchly against when in opposition. It is a clear omen for what’s in store for citizens, as workers, as custodians of natural resources and as beneficiaries of public services.

Raju K is a student pursuing M. A. Development Management in MSSW, Chennai, and S.Karuppasamy is an engineering graduate now pursuing law at SRM university.