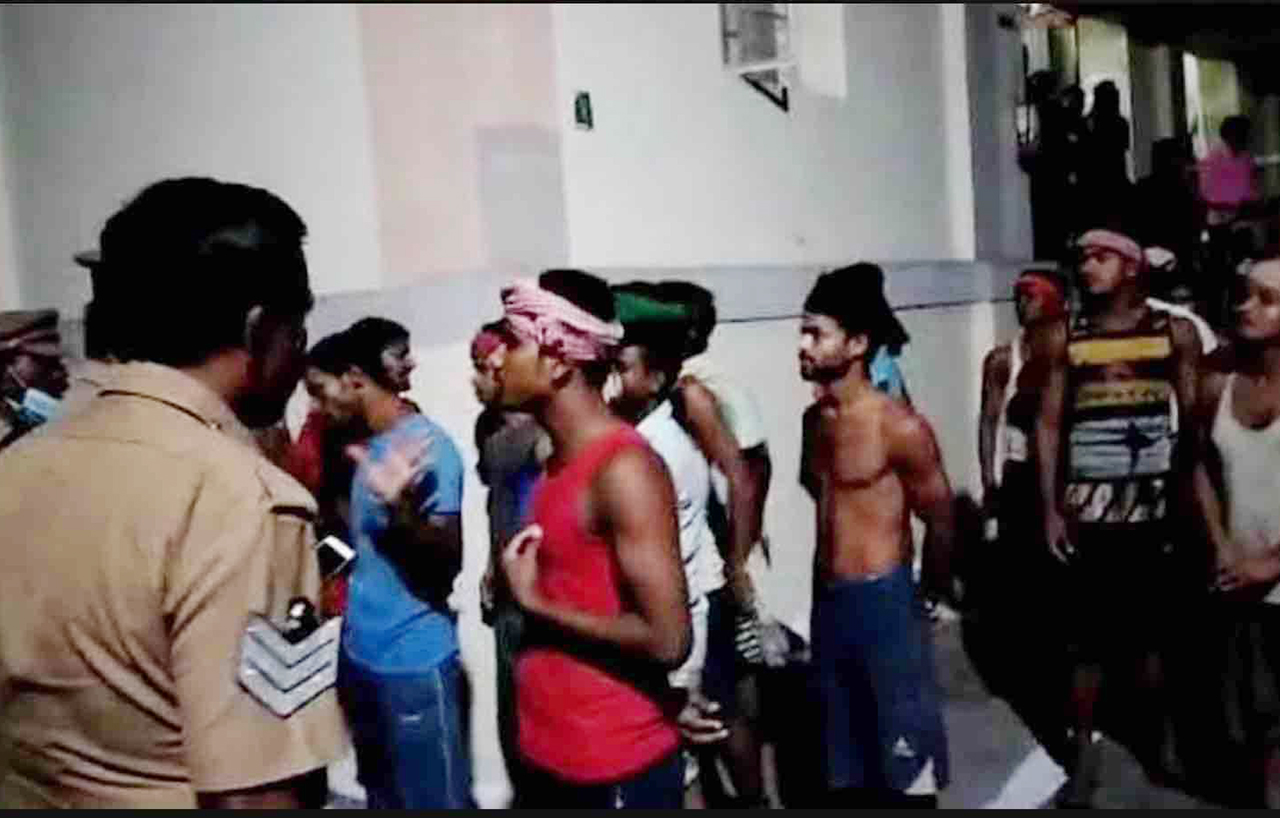 Fact finding report: migrant worker run over by a lorry inside factory premises in Erode, TN

Kamothram (male, aged about 30 years), a migrant worker from Bihar, was run over and killed by a coconut oil tanker lorry in the premises of SKM Animal feed and Food Ltd. in Erode, TN, on April 6, Wednesday, at 8.30 pm, while joining for second shift duty. On hearing of the incident and the violence that followed, allegedly inflicted by a one-sided police action in collusion with the powerful factory owner, the TN-based committee Migrant Workers Protection Movement formed a fact-finding team and investigated the incident on April 13.

1. Kamothram (male, aged about 30 years), a native of Sampran district, Bihar was run over by a truck at the company premises of SKM Porna Oil Factory at ‘Nanjai Uthukuli’ in Modakurichi taluk, Erode District 8.30pm, on Wednesday night, April 6th, 2022. He was run over by the coconut oil tanker lorry while he was going for his 2nd shift. Kamothram had joined SKM in November 2021. He has a wife and two children in his native state.

2. The workers were enraged as there was no positive response from the management. Rather than look at the plight of the now deceased migrant worker sympathetically, they resorted to strong arm tactics with the complicity of the police. They refused to come to a compromise by offering sufficient compensation.

3. Except for the Additional SP Koyal, who knows Hindi, who came in to facilitate smooth settlement of the issue between labourers and the employer, the local police joined hands with the rich factory owner. instead of pacifying and appreciating the apprehension of the workers who did the only thing they could, namely, to prevent the police from taking away the body of the deceased for post-mortem lest they be dispersed without any written assurance.

4. The police, taking the law into their hands, and using brute force, at about 12pm, sent 200 reserve policemen, who lathi charged the labourers and forcefully took the body of the victim for postmortem to Erode Government Hospital.

5. In order to defend themselves from the unprovoked violence unleashed by Police, the migrants retaliated and attacked the police and the management.

6. Rather than pursue justice as per their duty, on 7.4.2022, at 4 am, police came into the labour camp took custody of 100 labourers who were involved in the agitation and beat them and locked them in the KSM Arangam.

7. Revealing the utter complicity of the police, a case was registered, FIR (79/2022) against the workers under 10 sections including 147, 148, 307 and the provisions of the TNPPDL Act Based on the complaint from police inspector T Deepa.

8. On 7.4.2022, evening, 40 Migrants were brought in before the Judicial magistrate III and committed to Judicial custody. All are currently imprisoned at the Coimbatore Central Jail.

9. What about the complaint pertaining to the real offence and the offenders? Why are the police reticent about that, the courts are silent and the Tamil Nadu State Government mute? What of the State of Origin, Bihar government? This is where we need to understand who the culprits are and what is their clout?

10. What is SKM Animal Feeds and Foods (India) limited, with Mr. SKM Meilandanthan, as the Chairman and his son, Dr. M. Chandrasekhar as MD and as Director, Mrs. Shymala Chandrasekhar: It produces feed for dairy, poultry and sheep and goats. It also produces Porna, cooking oil. It Exports egg powder to 27 countries of Europe and Asia. it employs about thousand migrant labourers from Bihar at its Modakurichi unit. There are almost 5500 migrant labourers working in that Industry, of them almost 1000 labourers are from Bihar. Labourers are paid Rs.480/- for 8 hours of work and RS.720/- for 12 hours of work in the company, employed for loading and unloading the goods from the lorries. Labour camp and canteen facilities are provided for the migrant labourers. Midday meals at the cost of Rs.65/- is given in the canteen. Most of the labourers are employed through agents and contractors.

11. The fact-finding team wanted to meet District collector. As he was not available, the team met the RDO Erode and presented the Status report of the death of a migrant at SKM, Erode. She promised that to follow up the report and inform the Collector.

12. After submitting the facts and the memorandum to the RDO, The fact-finding team had a Press meet with all the media people. All the facts were share and the team demanded the district authorities to immediately investigate the happenings and forthwith to release the innocent migrants from the jail.

13. The Fact-Finding team also tried to visit SKM company and the labourers. The team was not allowed entry into SKM. The team with the help of Hindi speaking comrades, met the labourers, including the cousin of the Migrant who died. The company premises and entrance are filled with lorries on both the sides of the road. One can immediately observe the busy traffic of the lorry tankers entering and exiting.

14. The team also initiated discussions with the Mudakurichi Police. Inspector Deepa was apparently out for the court duty. The lady police officer present refused to divulge any news about the incident except about the 7 police who were affected by the incident. All the Police present at the police station pleaded ignorance about the incident.

15. We found that since Inspector Deepa was the complainant, the Inspector Vijaya, South Erode Police station, was the Investigating officer of the death of a migrant and she only could share the details of the incident.

16. Mr. Vinod, officer in charge of DISH (Department of District Industry and Safety Health), Erode, was the last person the team met. He informed us that he had already presented preliminary investigation report about Safety and Security issues involved in the death of the Migrant death in the premises of SKM to the concerned authorities. He also gave assurance that he would give a detailed report in order to take cognizance of the crime and to initiate legal proceedings against the SKM management.

17. The fact-finding team also presented their report to the DISH officer. The safety and security for the labourers within the premise and outside were the serious concerns raised by the Investigating Team. Adequate road lighting facilities during the night, provision of speed breakers were to be implemented urgently to prevent further mishaps.

18. The Fact-finding team has learnt from the statements of labourers and from the copy of FIR registered by the Mudakurichi Police Officer, and also through the department officers in the Erode District, that the police atrocities that followed the tragic death of a migrant worker was the result of a plan, tantamount to a conspiracy nexus by the SKM management, Police and the district administration. They were afraid that the refusal of dead body migrant would lead to serious repercussions to SKM Company and its reputation. They all seemed to have forgotten their duty to do justice. 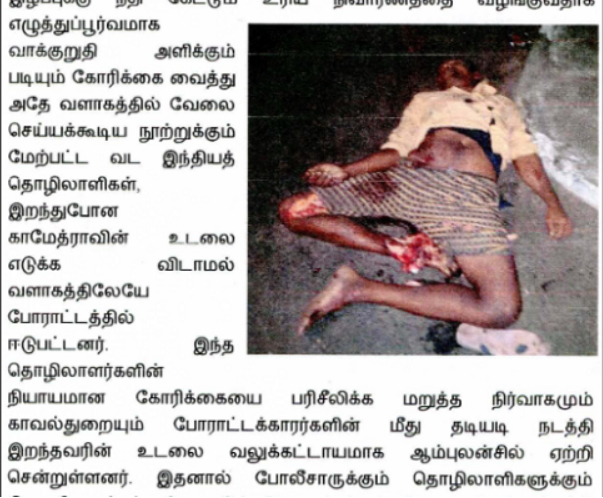 1. Come straight on to the facts to understand what actually happened on 6.4.2022, night using The CCTV images recorded in the company premises: of the accident, of the agitation and of the lathi-charges. All these to be investigated under special independent team of People.

2. Judicial inquiry by a sitting High court judge to probe and investigate the incidents.

3. Immediate release of all arrested workers.

4. To hold SKM management accountable for the fatal accident at the workplace based on the safety precautions and related protocols that they were supposed to have followed.

5. Tamil Nadu state government should accept responsibility for safety at the workplace of all workers including inter-state migrant labourers.

6. Pay compensation of Rs.50 Lakh to the deceased worker’s family

7. Labour camps, Hostels, canteens, Petrol bunks, public roads to be benchmarked to indicate how far they falls within the responsibility of the factory management or which departments should look into the safety and security of the worker when it is out of the immediate factory premises.

8. More than 200 labourers have moved to their hometowns in fear of arrest and torture, their payment dues and humanitarian compensation to be settled immediately.

9. Migrant workers usually are seasonal or short-term workers and do not claim gratuity, PF, ESI benefits. TN government should pay back their dues through DISH.

10. The death of the migrant was not merely accidental; it was due to systemic negligence; the roads are very narrow with no speed breakers, no proper lighting on the roads and no minimum speed criteria to be maintained by Transport services within the premises and outside the premises. Safety and Security of the Factory should be monitored more closely by DISH and regular compliance reports to be filed by MKS.