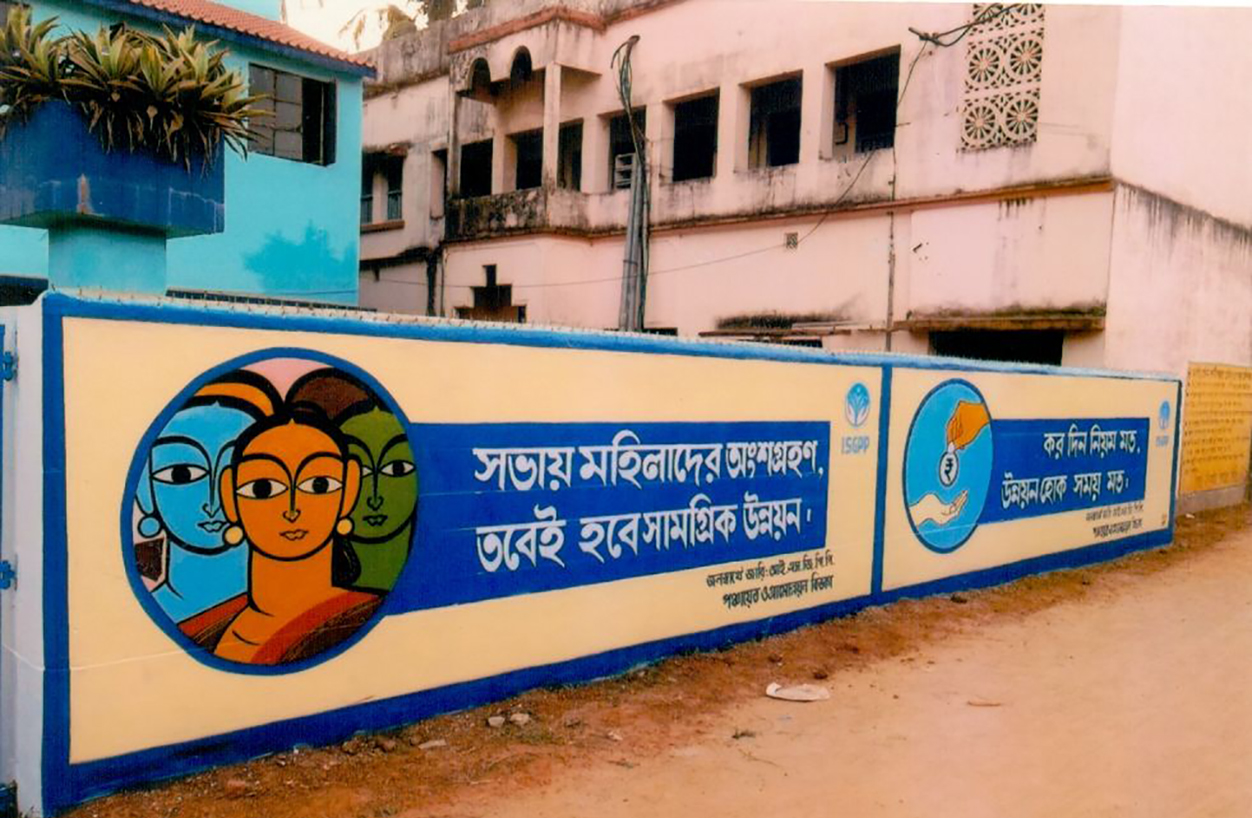 The Panchayat Raj or the local self-governing system has collapsed in West Bengal. Political violence during the panchayat elections, non-functional Gram Sabhas, arbitrariness, corruption and increasing centralization of power has brought the very notion of decentralisation of political power in the system of rural governance into question. Dilip Ghosh seeks a way out of this.

We have come to realise from experience that the Panchayat system, which was started with the aim of decentralisation of democracy, is now on the verge of extinction in West Bengal. Violence, nepotism and corruption symbolise the system. While it is difficult to change the system, given the present political environment in the country and the state, the issue is still important to ignore. Developing participatory local governance is an important aspect of the struggle for enriching democracy in India. I will try to express my opinion in a nutshell.

1) There is a demand that more funds should flow to the Panchayats. That,  I am afraid, would only address the symptoms without curing the disease. The problem lies deeper.

Panchayats, as institutions of local government, are important because they have the potential to ensure wider participation, especially of the marginalised and dis-empowered, in public decision making. It also enhances the possibility of arriving at better choices and superior decision making. There is  also  the potential for improved planning and management of the locally specific services like small scale production, land water and forest cover management and improved efficiency in implementation of all development programmes.

The 73rd constitutional amendment defines Panchayats  as an institution of self-government. Some authorities have seen in this provision an emergence of a third tier of government.

But in reality the constitution recognises government only at two levels., namely the Union and the states. The 11th schedule is just an illustrative list of subjects which the state legislature may, if they so desire, hand over to the Panchayats. The list includes nothing which is in the exclusive jurisdiction of the Panchayats.

It does not follow from the 7th schedule which is the only authoritative statement on sharing of state power between the government of the Indian Federation. In reality, the constitution still lacks the concept of a government at the local  level.

2) So far as devolution of powers to the Panchayats are concerned, excepting for Kerala no other states, including West Bengal, have really devolved any exclusive jurisdiction on any of the subjects listed in the 11th Schedule  to the panchayat bodies. The panchayats have not emerged as autonomous self-governing institutions.

In reality, Panchayati Raj Institutions (PRI) are mostly acting as agents of the state and central government, implementing Centrally Sponsored Schemes (CSS) and state government programmes. These bewildering patchworks of central and state sponsored schemes  are very poorly coordinated and there is very little sense about the overall impact of all these schemes at the local level. PRIs have almost no say in the range, scale or scope of these schemes.

3) Inter-jurisdictional allocation of programmes and funds under the CSS’ are subject to the discretion of state government. Formula-bound transfers recommended by the State Finance Commissions have not been widely publicised; inter-jurisdictional local governments do not know what they are entitled to.

In order to ensure proper devolution among the tiers of Panchayats it would be necessary to have detailed functional break-up of the components of functional items to be devolved to the Panchayats as a whole and then map its components as Village-specific, Block-specific or District-specific. The relevance of functional areas, its possible correlations and the availability of infrastructural support etc. are to be kept in mind for decisions on devolution.

There are common items in the Eleventh and the Twelfth Schedule on education, health and sanitation, drinking water, roads, energy, poverty alleviation, and welfare of the weaker sections. All these items are also administered by the departments of the State Government under its Constitutional obligations. All Constitutional partners – the line departments of the State Government, the tiers of Panchayats and the Municipalities need to have clearly demarcated functional items, as per their relevant Schedule, which will be the basis for its planning, implementation and monitoring.

5) Assigned schemes are those entrusted to any tier of the Panchayats or to the Municipalities by the departments of the State Government under the respective State Act through a notification under defined terms and conditions. Since the State Panchayat Act/ Municipal Act does not keep any provision for any role of the Ministry of the Central Government, the latter cannot assign any scheme directly to any tier of the Panchayats or to the Municipalities. Assignment of schemes can only be affected by the State Government. Unlike devolved responsibilities, it is, however, not a kind of institutional empowerment by the Legislature of a State. It is scheme-specific assignment only and valid for the term of the assignment. In other words, while devolution leads to empowerment through state legislation, assignment is a task concept of implementation of schemes by the departments of the state government. There does not exist any scope for devolution of any scheme whatsoever. It is for the same reason, assigned schemes are not qualified to pass as a proxy indicator of devolution. The compliance of necessary conditions by itself is not good enough for putting in place devolution. Unless sufficient conditions are met, it will not be possible to ensure devolution to take place firmly. The non-compliance of the sufficient conditions explains why the country is still to institutionalise constitution ordained devolution.

Hence it is not just about increasing the budget or fund flow to the panchayats that would change the nature of the institution. Deeper reforms are called for.

6) The Panchayat bodies are subject to limited oversight from below (Gram Sansad, Gram Sabha, civil society) or from above (audits). PRIs have very little say in running local schools, healthcare clinics. They have virtually no role in local agricultural or business development. Of late however there is an attempt to prepare Gram panchayat development plans but I am not sure to what extent the community are really get involved in the process given the very limited resources at its disposal. Suggestions have been made about strengthening gram sansads. That is, of course, very welcome, but it seems that at present  even the statutory meetings (Two in a year) are not held regularly. Immediate tasks are, therefore, the following:

a) Compel GPs to convene meetings in May and November, as envisaged in the Act

b)  Ensure attendance of people, at least ensure quorum

c) Let the Gram Sansad  do what they were asked to do previously, namely, selection of beneficiaries of some schemes, prioritising development projects, monitoring implementation of projects etc.

Institutionalising these practices is even now a huge challenge and unless this is ensured, assignment of more responsibilities to this platform would be an exercise in paper only.

7) On The issue of malpractices of local body elections I think  all the local body elections held during the last few terms have suffered from this malady and the scale has been increasing. We need to look at the  three institutions which are responsible for conducting elections and their manner of functioning during the elections to address these issues.  These are the State Election Commission (SEC), the bureaucracy and the police. The SEC is constitutionally responsible for holding free and fair elections. The bureaucracy and the Police are constitutionally required to function under the regime of rule of law. All the three institutions have to ensure that they are not servile to the ruling dispensation and act with an undesirable and undemocratic bias. Things are not likely to improve. For reaching the goal of free and fair elections, reforming these institutions is of foremost necessity. Let people demand accountability from them.

8) What obviously follows from unfair elections is  the nature  of representatives who have been elected to the local bodies. Quite a few of them are reportedly indulging in corrupt practices. The media reports  instances of  syphoning off panchayat funds of various schemes, extortions, bribery and many other illegal activities.  It is no wonder that in some recent cases (Last one or two months) of murder, extortion and gang rape, the names of panchayat members have featured. Recently a CAG report has come down heavily upon the PRIs of West Bengal for huge corruption and lack of transparency in the distribution of relief to the victims of Amphan cyclone of 2020. The civil society now needs to facilitate the process of demanding accountability of the Panchayats.

9) Panchayati raj is about decentralisation of governance. Panchayats are local governments. Local development should be their responsibility.

Today, we find that civil servants along with MLAs play a more important role in the decision-making process of local development. Besides, there is also a tendency to centralise power. Projects are being implemented without involving the PRIs. We need a movement to give back to the PRIs what is their due.

10) Lastly, direct democracy is a fine concept, but in a country of our size it needs to function in tandem with representative democracy at higher levels. Working out this balance is what matters most.  A true democracy demands not only active and right conscious citizens, but also their participation in governance. The local government provides a huge space for participation. Developing participatory local governance should, therefore, be an important aspect of the struggle for enriching democracy in India.

The author is a retired IAS officer.