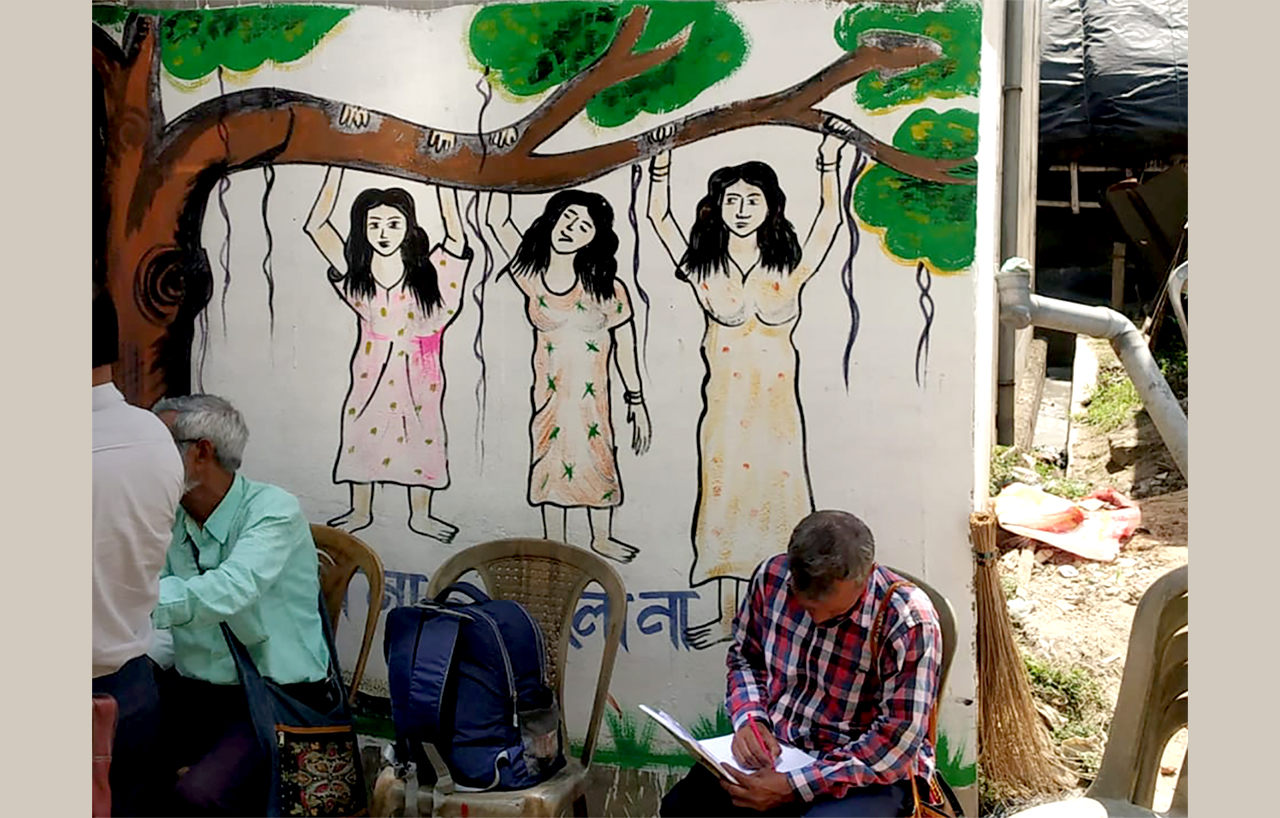 She Died to Save us all

Tuhina is paying the price of being a female. In a state with a woman at the helm, who knows how many Tuhinas have to die to draw the attention of the administration as well as male dominated activist circles, writes Nisha Biswas.

There in old city of Burdwan

She died to save us all.

Walk down the narrow lane of Notun Palli of Babubagh, after three or four houses on the left, around a turn is a wall freshly painted with a big green tree. On the tree hang three girls with a strong thick branch with a caption under it that says holo na, holo na (did not happen, did not happen). The girls look young, of different ages, features and heights and have striking similarity with Tuhina, Jharna and Kuheli, daughters of Dhanai Shekh living in a house facing the painting.

Tuhina Khatun, 17 year old young and energetic class XII student preparing for exams in April had to die by suicide. Tuhina, who lost her mother 4 years back, was living with two elder sisters Jharna Bibi (27) and Kuheli Bibi (24), their husbands and kids at Babubagh house of her father Dhanai Shekh. Motherless Tuhina being the youngest and the only educated member of the family was pampered. Remarried Dhanai Shekh lived with his new wife at Khagragarh, a few kilometers away from Burdwan. Dhanai Shekh worked as an ambulance driver at Burdwan Medical College and was in regular contact with the three daughters and did look after them.

The rivalry between Bashir Ahmed and Mukhtar Ahmed is well known and both were hopeful of getting the ticket for the Burdwan Municipal Corporation election. Mukhtar Ahmed too has the blessing of a group of senior TMC leaders, whereas Bashir Khan’s closeness to influential councilor Khokan Das and minister Swapan Debnath is known to all. Bashir Ahmed has accumulated huge wealth through ‘cut money’, an illegal commission charged from common people intending to avail benefits of various government schemes.

Mukhtar found an opportunity in Mamata Banerjee’s dictate to ‘refund the cut money’ in 2019. Mukhtar claims that he made Bashir to refund 30 to 40 Lakh. Tuhina’s father Dhanai Shekh, a close associate of Mukhtar, was with him in this drive. Dhanai’s daughters Tuhina, Jharna and Kuheli too were associated with Mukhtar.

With Bashir @ Badshah’s nomination, Mukhtar’s people were in a tight spot. They were ridiculed, abused, beaten up and chased. Houses were attacked and many of them were forced to leave their dwellings. The extreme was the wall painting in front of Tuhina sisters home. They were three young females living with three kids all alone. Father Dhanai though was in regular contact but was living with his new wife at Khagragarh. Kuheli’s husband has gone to work in another state, Jharna’s husband being a driver used to stay out of home for days together. The family was managed by the illiterate Jharna and Kuheli. The vulnerability of the three sisters was exploited by Bashir @ Badshah to reprimand people in the opposition.

With the painting started the harassment of Tuhina sisters. 10/15 hooligans were always there hurling slang and obscenity. They will caress the girls in picture, kiss them, run their hands all over the body and keep saying ‘Tomay kobe pabo’ (when will I get you?)  threatening them of rape. For more than a month the girls have to endure it. They stopped going out. Whenever they tried, the girls were chased by the goons. Not only the girls, almost all the residents of Notun Pally were harassed. Women were not allowed to use the public toilet or collect water from the public tap. Women said that to minimize the use of public toilets, they were eating less and drinking less water. They were all out abused in filthy sexist language. Men stayed away from home and supplied daily needs stealthily in the darkness of night. Students stopped going to schools and colleges.

On 2nd March, at noon, a victory procession of Bashir Amed @ Badshah passed through Notun Palli. The Band party played ‘Khela Hobe’. They hurled bombs in front of Tuhina’s home, broke the iron gate and pulled the sisters by hair. The girls were beaten, abused, rubbed cheeks with cheeks, tried kissing on lips. No part of their body remained untouched. The harassed girls somehow managed to extricate and rushed home. The girls were awestruck and with great difficulty could gather themselves.

Tuhina did not utter a single word and refused to have lunch. After lunch Jharna and Kuheli found the doors of Tuhina’s room locked. They called her, pushed the door, shouted but there was no response. On peeping through a window, the sisters saw Tuhina hanging from the ceiling fan. Jharna and Kuheli rushed to the crowd gathered outside for help, once again they were abused, beaten up and pushed and pulled. The cry for help was subdued in the noise of ‘Khela Hobe’.  The goons left after realizing that Tuhina has died by suicide. Women from the neighborhood came for immediate help and then police came and a post mortem was conducted. Registering FIR too took time. So far a total of 5 persons (4 men and a woman) of the 14 accused are arrested. As usual Bashir Khan @ Badshah is absconding though he is seen with his close friend Khokan Das another councilor on 6th March.

Badshah is in the habit of wielding clout. In 2016, he slapped the teacher-in-charge of Burdwan Raj College and threatened him with a revolver during a feast organized by Khokan Das, another councilor of the ruling party. The teacher alleged that Badshah interfered in day-to-day functioning of college and the admission process and that he resisted this interference.

It is only after Tuhina’s death by suicide that the men are back at home and women are freely moving around. Police are all around with CC Cameras to keep a watch on the visitors. Much smaller action on the part of the administration could have saved Tuhina. They went to every one possible including Rashid Khan. Mukhtar Ahmed for whom father Dhanai Shekh worked too was of no help. According to the police administration the drawing on the wall is just a caricature.  A caricature to for sexual fantasies!!! Incidentally in a ward of 7000 voters including 1400 Muslim voters, 47 voters are in Tuhina’s family.

The state of West Bengal has long history of post poll violence. But the degree it has taken is unprecedented and worrisome. On 19th February we saw the murder of 28-year-old prominent young student activist Anish Khan of Sarda Pashchim Para under Amta PS of Hooghly being thrown out of the third floor of his house by four men of Amta PS. Within 15 days of Anish’s death comes the death of Tuhina. Whereas protests for Anish Khan’s murder are continuing, Tuhina’s death is hardly drawing attention. Tuhina is paying the price of being a female. In a state with a woman at the helm, who knows how many Tuhinas have to die to draw the attention of the administration as well as male dominated activist circle. However, the family and the residents of Notun Palli of Burdwan unanimously agree that Tuhina died to save us all including Mukhtar Ahmed who remained inert to their travail. With the drawing still on the wall, trauma will fade with the natural fading of the drawing but the stains will always be there. Is this the future of female voices in West Bengal?

The author is a human right and feminist activist.