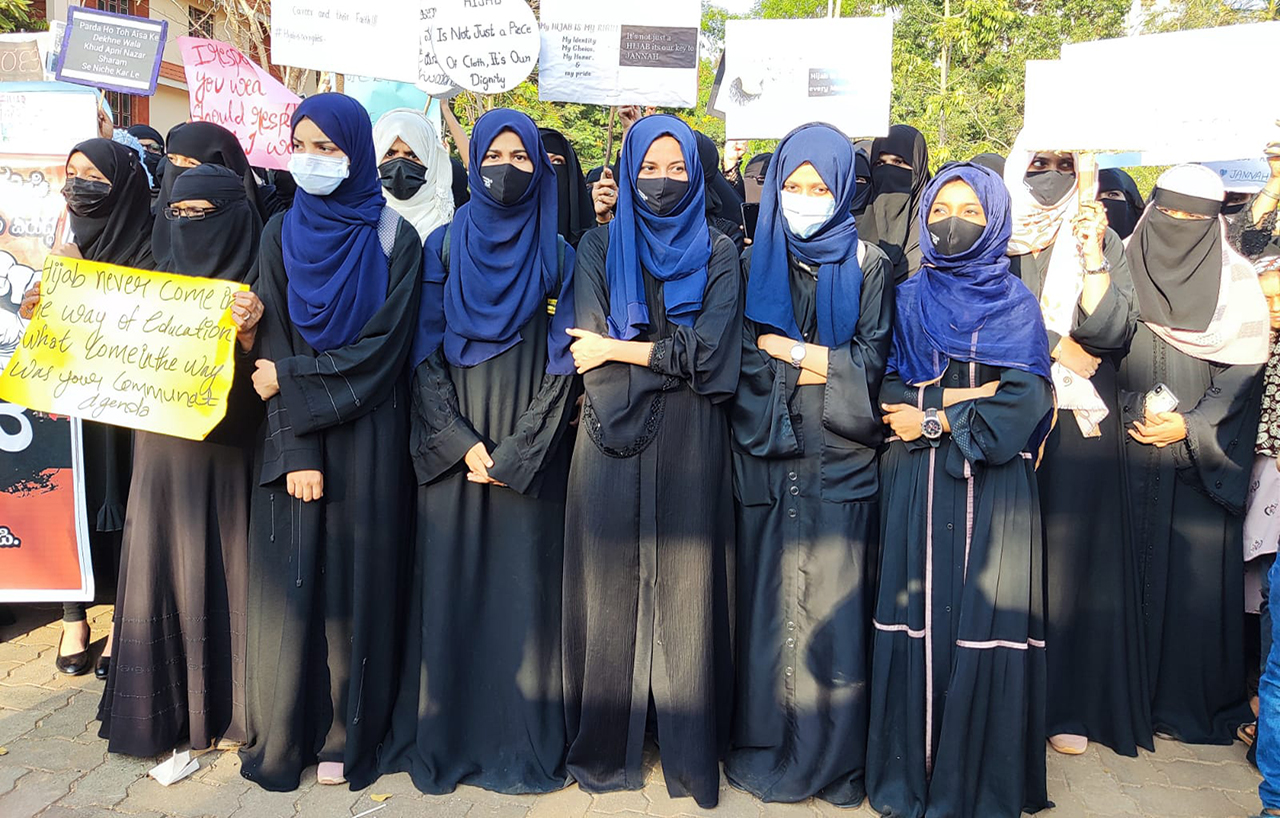 The Karnataka High Court in its order today has held that wearing of hijab is not essential to the practice of Islam; that College Development Committees (CDCs) have a right to prescribe a uniform; and that Muslim girls must comply with whatever uniform is prescribed by their college.

1. We, the undersigned organizations working for women’s rights and democratic rights, note that the Supreme Court is already apprised of the issue. We are confident that the Supreme Court will protect hijab-wearing Muslim girls and women from discrimination and exclusion in the name of school or college uniforms.

2. The Karnataka HC judgment recognises that CDCs of colleges have a right to make decisions regarding uniforms. In Karnataka itself, many colleges have made additions to their rules specifying that hijabs could be worn along with uniforms. Likewise we appeal to all CDCs in Karnataka to allow girls and women to wear hijabs along with uniforms just as Sikh boys and men can wear turbans, and Hindus can wear bindis, tilaks, threads, sindoor etc.

3. We take this opportunity to remind the CDCs that not a single college in Karnataka originally had any rule banning the wearing of hijab; in fact one college rule book actually specified that students could wear hijabs conforming to the colour of the uniform. So it was not hijab wearing girls who defied the prescribed uniforms. It was Hindu-supremacist groups that disrupted colleges, forcing them to amend the rules to selectively prohibit hijabs. This was a chance for the Karnataka HC to address bullying in schools and colleges and both the institutions; but failing to do so, has endangered many people from minority communities and identities who may look different or be different from the most.

4. We appeal to the Supreme Court to issue an immediate stay on the Karnataka HC order. This order will have a far-reaching negative impact on the safety, dignity, and right to education of Muslim girls and women. We point out that the even the interim order of the Karnataka HC had resulted in not only Muslim girl students but even Muslim women teachers being prohibited from entering school/college grounds. The order became a pretext for publicly humiliating Muslim girls and women by demanding that they strip off their hijabs publicly at school/college gates as a condition for entrance. Hijab-wearing students were forced to miss classes and even exams as a result of the order; and some Muslim women even resigned as teachers in protest at the indignity of being forced to strip off an item of clothing. Also, the Karnataka order encouraged educational authorities all over the country to prohibit entry of hijab-wearing students and teachers into campuses. Further, there were instances of hijab-wearing women being accosted and harassed in other public spaces too – for instance in a bank in Bihar. So as to protect hijab-wearing Muslim girls and women from any further such grievous instances of discrimination, exclusion, publicly humiliation, and harassment, we appeal to the Supreme Court to lose no time in issuing a stay on the Karnataka HC order. This was a chance to address bullying in schools and colleges and both the institutions and courts failed in addressing it thereby endangering many people from minority communities and identities who may look different or be different from the most.

5. The reasoning of the Karnataka HC verdict is misleading and unsatisfactory on many counts:

a) The verdict spends most of its time arguing that the wearing of hijab (headscarf) is not an essential practice in Islam. But it fails to satisfactorily address the main issues: is it not discriminatory and unconstitutional to selectively force a Muslim girl or woman to lose her access to education in case she wears a hijab?

b) The verdict cites a passage from Dr. Ambedkar’s writings on how “compulsory system of purdah” results in segregation and seclusion of Muslim women, to then argue that wearing of hijab/veil etc may inhibit emancipation, public participation, and access to education for Muslim girls and women. This is a shocking distortion of the thrust and intention of Dr Ambedkar’s observations. Dr Ambedkar’s remarks are not about any item of clothing. Dr Ambedkar refers specifically to the compulsory purdah system preventing girls and women from appearing in public outdoors; a form of forced segregation preventing them from accessing education and from “outdoor activity”. Dr Ambedkar did not suggest, as the HC order implies, that a Muslim girl or woman voluntarily wearing a headscarf (hijab) be prevented from accessing education and thus forced back into seclusion inside the home or segregation by being forced to study in a separate Muslim school or college!

c) The verdict cites the Indian Young Lawyers Association vs. State of Kerala judgment (popularly known as the Sabarimala judgment) to assert that the constitutional “right to freedom of religion” does not protect all religious practices; and that therefore cannot protect the practice of wearing hijab. How can the Sabarimala verdict against prohibition of women’s entry into temples be used to justify prohibiting the entry of hijab-wearing girls and women into schools or colleges?!

d) The verdict makes the mistake of equating uniforms with “uniformity”. In India, school/college uniforms have always accommodated social and religious diversity: allowing Sikh boys and girls to wear turbans, for instance. So such diversity that accommodates turbans and hijabs is not at odds with uniforms. Enforced uniformity has never been a feature of Indian schools and colleges. The verdict mentions the MEC EDUCATION: KWAZULU-NATAL judgment which held a South African school’s refusal to allow a Hindu girl to wear a nose stud with her uniform, to be unconstitutional. It holds that this case cannot apply to the hijab since the nose stud is “ocularly insignificant”! The ethical and constitutional arguments of a court should not rely on such subjective biases: which does not see a Hindu girl’s nose stud as disturbing to the eye but finds a Muslim girl’s headscarf to be so.

e) The verdict, as we have pointed out, wrongly applies Ambedkar’s concerns about forcible segregation of women, to the voluntary wearing of hijab. It implies that the practice of hijab itself militates against women, and thus should not be allowed in schools and colleges. *The verdict fails to understand the very concept of women’s autonomy and consent, since it fails to distinguish between forcible imposition of religious practices on women against their will; and women’s choice to observe certain practices based on their free will. The Sabarimala analogy can make this point clear. Women petitioned court to be allowed to enter Sabarimala since the prohibition on women’s entry violated their rights and equality. *The court in striking down the prohibition on women’s entry in the name of the temple authorities’ “freedom to practice religion”, did not in any way force women who believed they should not enter Sabarimala, to enter it against their will in the name of “emancipation”! Likewise, it is abhorrent that hijab wearing girls or women should be barred from entering schools or colleges in the name of “emancipation”. Emancipation lies in respecting the autonomy of girls and women, not in forcing practices on them in the name of either religion or secularism.

We reiterate our solidarity with the hijab-wearing Muslim students fighting for their right to education, dignity, and autonomy.