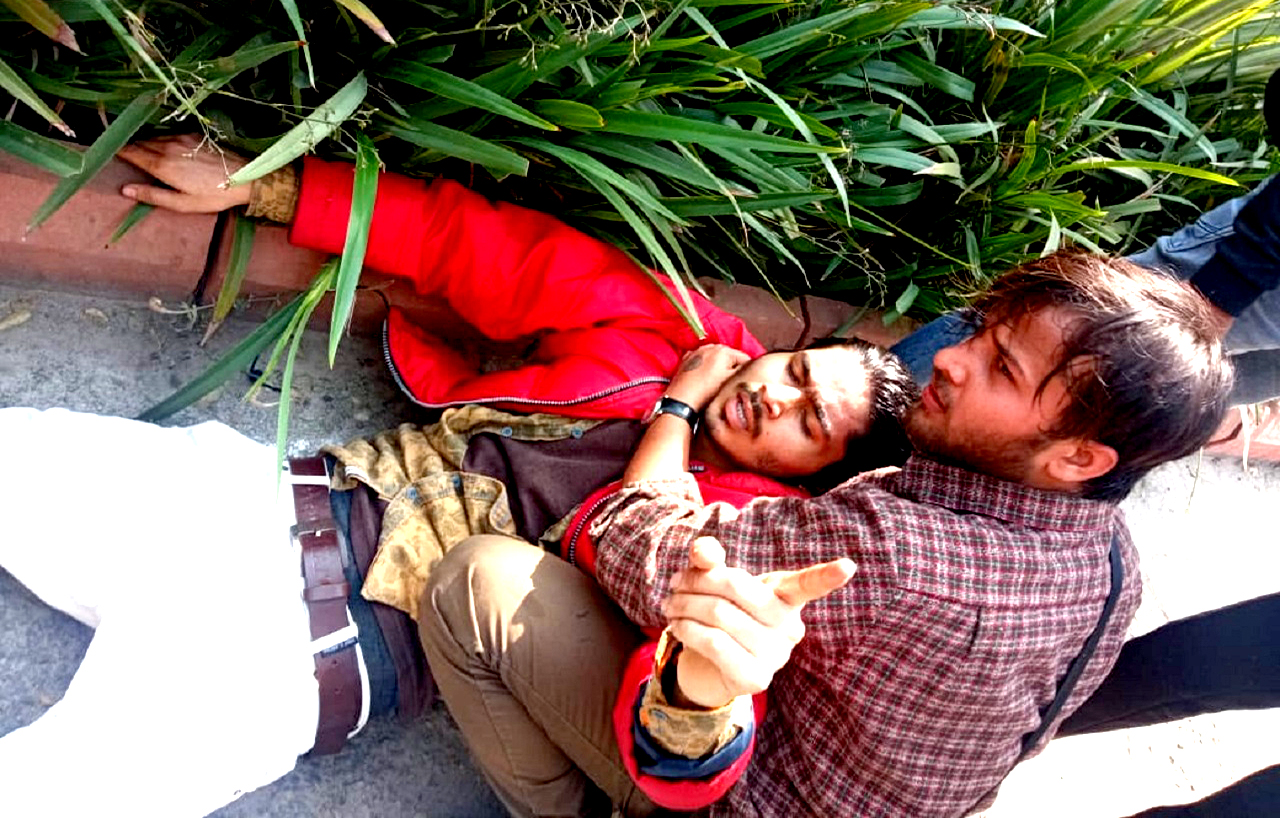 Human rights activists, filmmakers, journalists, academicians, advocates, researchers, social workers based in different parts of the country condemn the brutal police repression on Human Right and student activists in West Bengal on 7 February for organizing public protest for right to free speech and expression. Over 150 signatories of people associated with various democratic and civil rights groups show support and solidarity to the students who braved police torture in custody, only for re-claiming right to free speech being trampled upon by an authoritarian state government and an administration sympathetic towards the right wing Hindutva organizations.

The public meeting at 7 February at Kamalgazi in the southern periphery of Kolkata was organised specifically to protest the wrongful detention of Dalit activist Saradindu Uddipan, whose re-circulated Facebook post questioned worship of deities in public educational institutions. The brutal and inhuman violence by the police on activists was further exacerbated by arresting and abusing student activists in lock-ups, implicating them with false charges and producing them in Court in a dehumanizing manner. This statement gives a detailed account of how activists and students were attacked on 7 February night, and 9 young activists faced custodial abuse before being released on bail after 4 days.

State repression on activists, students, representatives of different marginalized and minority communities have only increased in the last few years. This incident is quite shocking as physical public protests are quite common in Kolkata and West Bengal. It is during the pandemic and lock-down that the right to access and protest in public spaces has been curtailed. Police and the administration have been using the Disaster Management Act and many other surveillance and repressive tactics to deter protests.

The statement condemns all such acts of State high handedness and police clampdown on protests by activists that is denying the fundamental right to express dissent and oppose government policies in public. The signatories and human rights organizations alarmed by the communalisation of police forces, and how it is blatantly violating Constitutional values and rights, have come together to protest such violence and crushing of fundamental rights by the law-machinery.

The statement is endorsed by over 20 groups across states including All India Progressive Women’s Association, All India Students Association, National Alliance of People’s Movements, CPI (ML) Liberation, People’s Union of Civil Liberties, Association of People for Democratic Rights, People’s Union for Democratic Rights, Forum against Oppression of Women, Feminists in Resistance, Shramajibi Mahila Samiti, Das Theke Dash Hajar, Maitree – a platform of women’s organizations and individuals in West Bengal, Centre for Protection of Democracy and Rationalism, Women against Sexual Violence and State Repression, All India Central Council of Trade Unions.

A full copy of the statement is given below.

We condemn the ruthless and brutal repression on human rights activists and student activists for upholding the right to free speech by the West Bengal police in Kolkata on 7th February 2022. Some democratic organisations came together to protest the illegal detention of the Dalit rights activist Saradindu Uddipan, regarding a re-circulated Facebook post questioning the manner in which educational institutions are working against the enshrined secular values enshrined in our Constitution by organizing Saraswati Puja on Basant Panchami day.

A public meeting and rally was called by organizations like Association for Protection of Democratic Rights (APDR), All India Progressive Women’s Association (AIPWA), All India Students Association (AISA), Ekusher Daak Manusher Dabi (a platform formed to resist the fascist forces in 2021) at Kamalgazi crossing, near Narendrapur Police Station where Saradindu Uddipan was illegally detained for nearly 7 hours.

The sudden arrival of police from the nearby Narendrapur Thana and their brutal attack on students and activists (both men and women) shocked everyone. Six activists including three students from Jadavpur University and a female activist were detained in the PS. More students and activists gathered in front of the police station while some activists negotiated with OC Anirban Biswas for the release of their fellow comrades. After stalling it for as long as they could, the activists were finally released on personal bond with no case on them.

The students and activists who were waiting outside the police station raised slogans welcoming the release of their comrades. In no time, the police, visibly agitated and aggressive, came out, this time, in plain clothes and under the command of Second Officer Arnab Chakrabarty, and attacked the jubilant activists. They were kicked, punched, lathi charged and were dragged along by their hair for up two floors, while being abused in filthy language. A student belonging to the minority community was thrown under a moving vehicle and kicked mercilessly.

Shocked and helpless, many activists gathered outside the police station. They were threatened with arrest, pushed around and forced to disperse. A senior vocal female activist was rounded up and pushed. The intimidating policemen directed her to come inside the station, claiming she’d be given a chair to sit. But instead, she was abused, threatened with slaps, punches and was not allowed to move. She was later released by another police man in uniform, and was ordered to leave immediately and go home.

Eleven activists including three women faced ruthless assault and violence in the police station. Two activists were released on 8th February at 2.30am. They were then taken for medical checkups, where they saw that false Medical Fitness Certificates were already kept ready for them at the hospital. Nine students, mostly from Jadavpur University including two girls, were detained in the lock-up. All the young activists were repeatedly beaten up, especially on their vaginas and breasts. They were threatened of being shot and murdered while in custody. They were then forced to sign on blank sheets. Throughout their time in the police station where they physically and sexually assaulted, the activists were not even given water to drink.

A young woman activist, who was already suffering with UTI, developed severe lower abdomen pain because of the way she was physically assaulted and kicked by the police officers. When she complained of pain she was rebuked of being a drug addict and told her that her pain is a drug withdrawal symptom and not because of the physical violence she was subjected to in the station. On continuous pleading she was finally taken to Subhasgram Government Hospital and pushed into the Covid ward without a mask. Ultimately she was checked in the emergency ward, a prescription was obtained but the suffering girl was not provided with any medicine. She fainted in front of the Magistrate due to the physical and mental exhaustion of being beaten and assaulted and because of her ill health. Another woman activist was continuously denied a sanitary napkin while being beaten up. When her clothes became visibly red after a few hours, she was finally offered a sanitary napkin.

CCTV Cameras were fitted in the toilets of lock-up and the female activists were forced to use toilets in full public view.  All through the night the students were abused, terrorized and girls were threatened of rape by the policemen walking around in indecent clothing and making sexual remarks.

Nine very battered and terrified students were brought in court on 8th February ’22 all tied with a rope around their waists which goes against the constitutional provisions provided under Art 19 & 21.

The judiciary functioned in a curious way, not surprising given how the State treats its dissenting citizens. Bail was denied on the first day of the court hearing, because the case diary and medical report were not made available. Next day, the bail was not granted because the injury report was not produced by the police personnel. The truth of the matter was that no such injury report existed; and finally the falsely implicated activists were released on bail after 4 days of torturous incarceration.

The Thanas under the present government have become highly communalized and are notorious for communal, casteist, patriarchal discrimination and violence. Last year in August, the policemen of Sonarpur PS attacked their colleague Suraf Hussain in his house, dragged him naked brutally beating him, his father, brother and his pregnant wife, who then suffered miscarriage.

We strongly condemn this entire incident of police brutality on activists and the attack on their freedom of expression. The undeclared war by the existing regime in West Bengal on civil society, human rights activists and students goes in tandem with what Mr Ajit Dovel has preached as ‘fourth – generation warfare’ in the passing out parade of the 73rd batch of IPS in Hyderabad in November ‘21. A fortnight ago, around 23 activists were detained at a bus stop after alighting buses and were held illegally in the New Town Electronic Complex PS for hours while they were going to submit a memorandum to the Education Minister.

On one hand, the people of West Bengal are facing highly communalized police administration and on the other, we have an extremely intolerant autocratic government which is not ready to pay any heed to public demands. While the Chief Minister is all out in establishing democracy in Uttar Pradesh, her policies in the state are not for the protection of our fundamental rights. Under no circumstances, should public protests by political and human rights and other social groups be criminalized; and neither can the activists terrorized, attacked and tortured in a democratic state.