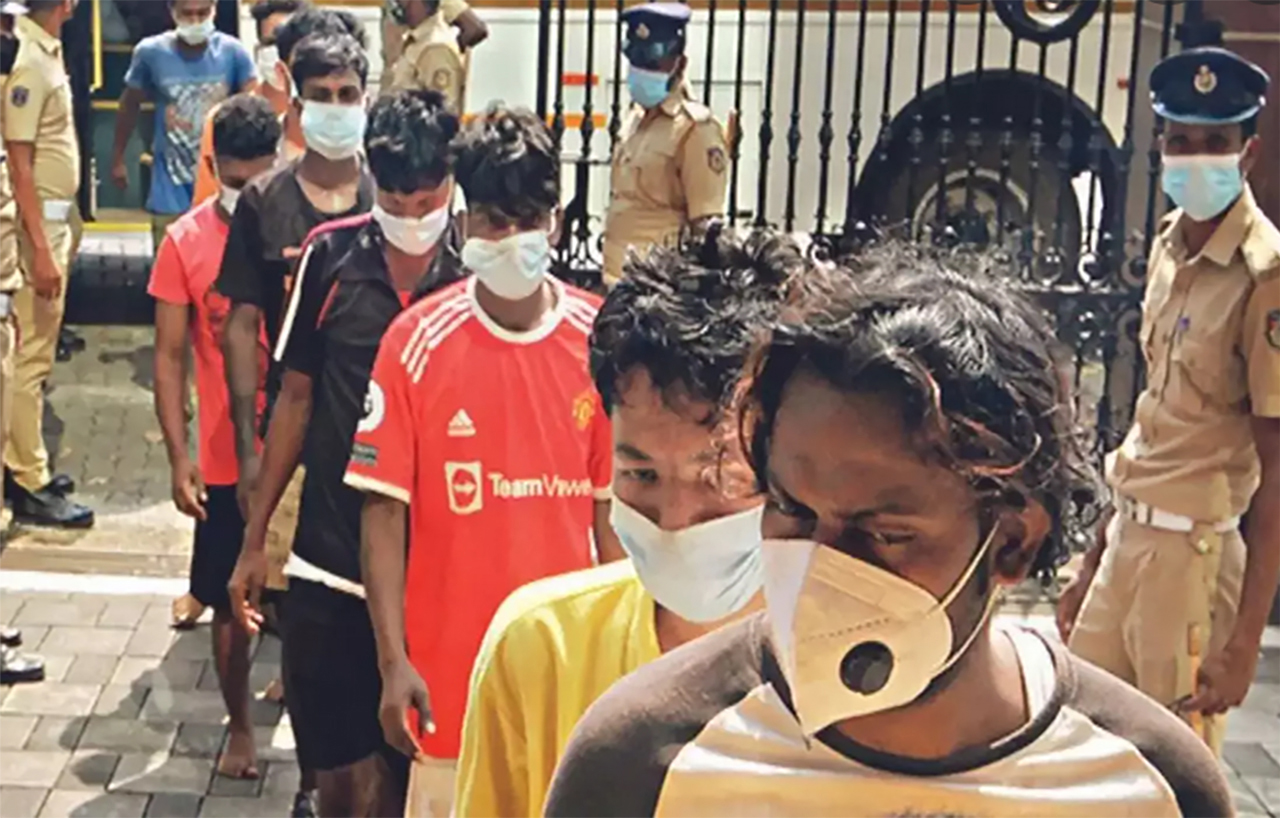 On Christmas Day, a celebration of migrant workers from various states working in Kitex Garments Ltd. in Kizhakkambalam, Ernakulam turned violent. Commotion broke out first amongst the workers, then with the company’s hired security staff and finally with the state police. While Kitex and the state administration are fighting a power battle of their own, the arrested workers have so far not found any tangible support from either side, nor from the government of their states of residence. While about 174 workers are rotting in different jails of Kerala under deplorable conditions, New Trade Union Initiative and Progressive Workers’ Organisation, Kerala, in a press conference on February 1, 2022 raised questions about violation of workers’ rights in the factory and dormitory, as well. These questions point out the need to look at the conditions which are bound to create severe dissatisfaction and anxiety among workers, naturally leading to violent outbursts. A GroundXero report.

The incident of arrest of 174 migrant workers, employed in Kitex Garments Ltd. in Kizhakkambalam, Ernakulam district in Kerala is a reminder of how the migrant workers are bearing the brunt of the fast worsening political, economic, and cultural situation in this country in various ways. Not only Kerala, their state of employment, but also, none of the administration of their states of residence has come to their aid so far. In a press conference organised by the New Trade Union Initiative (NTUI) and Progressive Workers’ Organisation (PWO) on February 1, an immediate intervention by the State Human Rights Commission and the Legal Services Authority has been demanded by M. Sreekumar (President, NTUI) and George Mathew (Chairperson, PWO), so as to save the workers from the inhuman conditions that they are living in in the jails in Kakkanad, Muvattupuzha and Viyyur. The workers have not so far received any concrete legal help. Activists said that bail had been granted to a few workers but the bail bond could not so far be arranged locally and efforts were still going on. It was also stated in the press conference that the workers did not receive clothes or other supplementary facilities in the jail for close to a month – ever since 164 and then 10 more workers were arrested on December 25-26 and December 29, 2021 respectively.

The police have slapped serious non-bailable charges on the arrested workers like attempt to murder (under Section 307), voluntarily causing hurt to deter public servant from his duty (under Sec 322) and rioting armed with deadly weapon (under Sec 148), apart from other charges. Videos of the workers’ Christmas celebration turning violent have gone viral on social media. The workers, belonging to different states including Jharkhand, Odisha, Manipur, Nagaland, Tripura, Assam and West Bengal have allegedly, in an inebriated state, set fire to two police vehicles – including the one belonging to a Edathala police station that joined in later as additional force – and vandalised wireless sets and a control room vehicle, injuring eight police officers.

Not only living in deplorable conditions inside the jails, as per NTUI and PWO, these workers have been forced to cope with unlivable conditions in the residential quarters provided by the company as well. Especially in companies like Kitex, migrant workers are often kept in bleak and congested dormitories within the factory complex, under constant surveillance by the security guards, who also often act as hired strongmen for the management. In this sort of suffocating environment, workers do not get any chance to mingle with the everyday life of the local people, learn the local language or find a footing in the local culture, while also living far away from home for long stretches of time. The depressing working environment alienates them from the local working class. Such alienation enhances the xenophobia and strong regionalism, especially in the situation of severe unemployment across the country. It also acts as a significant weapon in the hands of the state-capital entente to minimise wage, maximise profit, and obliterate possibilities of solidarity developing between local and migrant workers.

The environment that the workers live in has turned the situation into a ticking time bomb, at times leading to clashes between the migrants and the locals, who view the migrants as eating their jobs and depressing the wage rate by agreeing to work at cheap wage. Sometimes, clashes break out between the migrant workers and the security guards and the police, like what happened in Kitex on Christmas Day last year.

However, in this case, Kerala Labour Minister V Sivankutty, in another statement immediately after the incident, said that a team had been formed for investigating possible violations of the labour laws by Kitex. A team led by State Labour Commissioner S. Chithra visited three labour camps and three units of Kitex. It must be noted that such an active interest on the state government’s part to investigate the living conditions of the migrant workers is not unrelated to the fact that the Kerala State and Twenty20 – the political party launched by Kitex – have been locking horns in a long-drawn electoral battle around the panchayat and assembly polls.

Twenty20 was launched by the corporate social responsibility (CSR) wing of Kitex Garments along with its sister company Anna Aluminium as an NGO. Later it was turned into a political party campaigning for various welfare measures in the area, while both LDF and UDF criticised it for corrupt practices and destroying the ‘democratic nature of election’. In 2015 panchayat election in Kerala, the party was elected to the Kizhakkambalam panchayat (losing only the seats where the company had its factories), and in 2020, it not only won all seats in Kizhakkambalam panchayat but also 41 seats over three other gram panchayats. However, in the assembly election in 2021, Twenty20 lost in all eight constituencies in Ernakulam. Interestingly, the CSR wing was started by the Anna-Kitex group in 2015, months after protests against alleged pollution of Kitex Garments Limited gained traction. The advent of the CSR wing, Twenty20, was however a gamechanger for the company, with the voice against pollution losing its strength.

The enmity created by the electoral battle between the LDF led state administration and the company gave this incident and the response of the Labour Department a political colour. For example, the Chief of Kitex, Sabu M Jacob – the propagator of the ‘Kizhakkambalam model of development’ –  has stated in court that the massive number of arrests and harassment of the workers is a demonstration of the government’s vengeance towards him and his company. According to him, as per the CCTV footage, the ‘true culprits’ are only 23 in number. Out of these 23, 13 were already arrested, so the additional 10 were picked up on December 29, according to the company’s inputs. The police are also investigating the possibilities and modus operandi of drug rackets in this area. The company management and the police had claimed that consumption of narcotic drugs along with alcohol, made the workers so “uncontrollable” on that day. However, workers – especially from Northeast India – are often stigmatised by associating them with narcotics, thus the allegation remains susceptible.

The true attitude of both the State and the Corporate can be seen from a Labour Department official, who in his statement, mentions the incident as the first ever “organised crime, involving a large number of guest workers”, or in how Sabu Jacob, in his byte to Asianet, attempts to wash his hands off the incident, lest his company gets further dragged into the mess “created by the cops” and lest the workers, after being released, create more trouble.

In the press conference, George Mathew from PWO also said that the arrested workers were primarily from Jharkhand (71) and Assam (31), belonging to the Adivasi and other economically backward communities. Among others, in particular, there are 16 workers from West Bengal – mostly from various Adivasi communities in West Dinajpur. The families of some of the workers from Jharkhand have submitted a memorandum to the Jharkhand CM’s office and have even managed to visit the workers briefly in the jails. These families were present in the press conference organised by the two unions. However, till now, no such steps have been taken for the workers from the other states. Several of their families could not even be contacted or informed of this mishap by the activists.

Some of the demands made by the unions are:

The incident is especially notable since Kerala has been lauded as one of the states that handled the migrant workers ‘crisis’ during the first phase of lockdown in an efficient and humane way. It is incidents like this that clearly indicate the insensitivity of a system that criminalises eruptions of pent-up frustrations of the workers via repression.