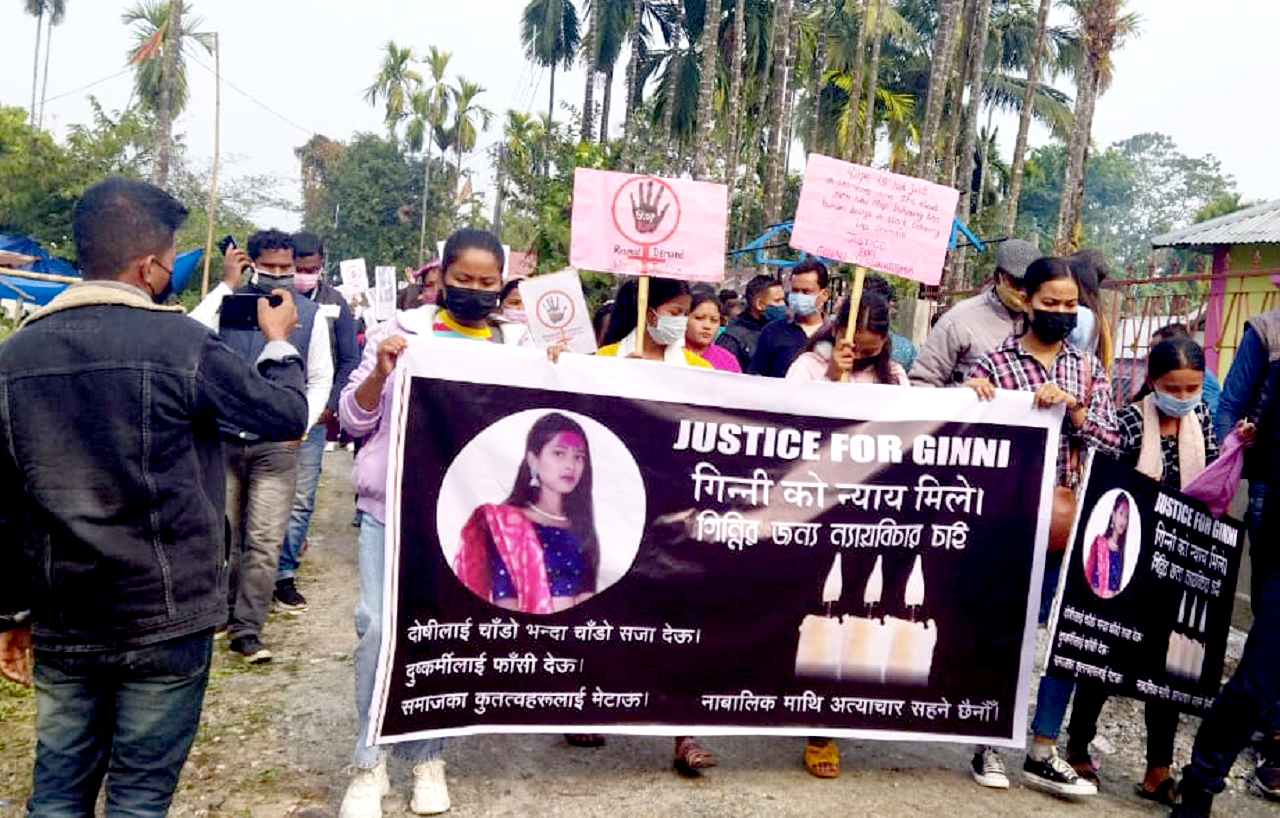 Sumendra Tamang writes on the recent rape and murder of a 17 year old girl of Manabari tea garden in Jalpaiguri district of West Bengal.

On 26th January, 2022, when the whole of India was celebrating Republic Day, at around 12 noon, the dead body of a girl was found near Oodlabari Railway Station, Jalpaiguri District, West Bengal. The body had been split into multiple pieces, and was discovered in a mutilated condition, with intestines spilling out, and several crushed bones, suggesting that the body had been run over by a train. A day prior to the discovery of the body, at the nearby tea garden of Manabari, a 17 year old Gini Biswakarma, who was attending a local wedding, had gone missing. Nobody knew her whereabouts except her friend Puja (name changed ), who had accompanied her to the event. She later revealed that Gini had left the wedding to meet an eighteen year old boy — Rahul Roy — who lives in Manabari Tea garden. Gini Biswakarma had been missing ever since. The family and villagers had alleged that she was gang-raped and murdered  by her assailants, after which the body was dumped on the railway tracks.

On 26th January, the mutilated body was identified to be of Gini Biswakarma. An FIR to that effect was lodged against Rahul Roy and unknown persons, after which Rahul Roy was arrested by the Railway Police. Rahul and Gini were both students of the tenth standard at a nearby school, and were both residents of Manabari tea garden. Meanwhile, the family is waiting for post mortem reports and the family members have demanded that the culprits be dealt with appropriately with strict punishments, which may include death penalty.

Where is the investigation headed?

According to the nearby Malbazaar police Station Inspector-in-Charge Sujit Lama, the case has been filed at General Railway Police (GRP), Malbazaar, as the body was found on the railway premises. The family and the locals allege that despite the passage of a week, the police have only managed to arrest the named accused Rahul Roy, and no further arrests have been made. When pressurized and asked about the development in Gini’s rape and murder case, the GRP directed the family to inquire to the West Bengal police, having jurisdiction of Malbazaar police station. When the local police inspector in charge was confronted with the same set of questions, he redirected the question towards GRP, Malbazaar. Running from pillar to post, the victim’s family and friends wait for the wheels of justice to come into motion.

One is prompted to ask, would this be the same procedure if Gini belonged to a family with more economic power and social status? Isn’t the law equal for all, and shouldn’t justice be served as deserved? Meanwhile, the bereaved family is sandwiched between administrative red tapism and hierarchies. The family fears that justice might be lost in the midst of such delay. They have demanded speedy and fast track investigation. This case of extreme gender based sexual violence of a minor girl, hailing from a tea plantation might be lost somewhere amongst various other files of pending, unresolved cases of gender violence. It has been more than a week now, but no further arrests have been made by the General Railway Police. Many human right organisations have questioned the investigation process and have demanded for the transfer of the case from GRP to West Bengal Police. Here, many questions thus arise:

After the Delhi gang rape case of Dec 16 2012, incidents of rape and murder have further accelerated in different parts of India. In most of the cases, media trials have been normalised and justified. A recent example of such a media trial could be traced in the Tarun Tejpal judgement of 2021. This judgement was a perfect example of how the media plays with ‘concocted and constructed truth,’ and ended up transforming the victim into the accused. Queries as to whether the girl was drunk or not, what she was wearing during the time of the incident, if the survivor/ victim had any relationship with the culprits involved, why the survivor/ victim was outside her house for so long, and such, perform the crucial task of transformation. This is precisely what can be termed as a form of normalized victim-blaming.

Needless to say, such questions emerge from a patriarchal mindset. And, like any other deeply entrenched social ideologies, patriarchy, too, remains profoundly unaware of its own inherent contradictions and ironies. For example, if the question was about the nature of the relationship that the survivor/ victim had with the alleged rapist, then why are there regular instances of marital rape within the closed bedroom doors happening in our society? If the question was about the time and place, then why do instances of rape and molestation happen inside our own families where one thinks women are the  ‘safest’?

In keeping with the widely held beliefs amongst women’s rights activists in India that sexual violence is grossly under-reported, social scientist Aashish Gupta, affiliated with the Research Institute for Compassionate Economics, compared National Crime Records Bureau (NCRB) statistics on officially reported cases of violence against women, with data from the National Family Health Survey (NFHS), which asked women respondents whether they had faced any sexual or physical violence within their own families. Since the most recent round of the NFHS was conducted in 2005, Mr. Gupta compared the NCRB statistics for that year with the extent of violence that women had admitted to in the NFHS survey. Mr. Gupta found that while 157 per 1,00,000 women reported to NFHS surveyors that they had experienced rape by men other than their husbands in the past 12 months, 6,590 said their husbands had physically forced them to have sexual intercourse against their will. This meant that just 2.3 per cent of all rapes experienced by women were by men other than their husbands.

Comparing the NCRB and NFHS data in 2005, only 5.8 per cent of rapes by men other than the woman’s husband were reported to the police, whereas only 0.6 per cent of rapes by the husband were reported to the police. Since marital rape is not recognised as a crime in India, it was probably reported as “cruelty,” Mr. Gupta found. In other words, gender justice is a complicated issue and it cannot be seriously dealt with without interrogating the underlying patriarchal ideologies which also often guide the many processes of the state, including that of the judiciary. In that context, judicial justice that takes an inordinate amount of time, the delay being often a function of an unexamined, unarticulated bias —  like in the case of Gini Biswakarma – can only add insult to the injury.

The State , Rape culture And Communalism.

Rape has often been used as a tool of subjugation and suppression of dissent. It has also been used as a tool of punishment for many expressions of alternative sexualities, and to control the sexuality of women in general. The Gorkhaland movement of 1986 has been accompanied by a considerable number of incidents of  rape and molestation, and such stories of sexual violence are often orally narrated  by the ones who survived the agitation. Women especially have been victims of such state sponsored violence. There is, however, hardly anything exceptional in such realities of sexual violence, especially within conflict zones.

In the1990s, when the area of South Chhattisgarh was ravaged by the Salwa Judum, a total of hundred documented rape cases were produced before the Supreme Court to emphasise upon the extent of violence in the area. It is because of such state sponsored terrorism that thousands of cases of gender based violence have been documented in these areas of ‘distress and social conflicts,’ like many North eastern states, and the region of Jammu and Kashmir.

Justice, on the other hand, in these cases, have been extremely rare. Although, there have been popular protests against such instances. On 15 July 2004, 12 women  had disrobed in front of the historic Kangla Fort in the heart of Imphal in Manipur — then the headquarters of the Assam Rifles — carrying banners with messages painted in red. “Indian Army Rape Us”, read one. “Indian Army Take Our Flesh”, said another. The women were protesting against the brutal rape and killing of Manorama Thangjam, a 32-year-old woman who had been picked up by Assam Rifles personnel in suspicious circumstances four days before the incident occurred. Manorama’s bullet-riddled body — with gunshot wounds to her private parts and thighs — was found near a rice field hours after she was taken away from her home.

On 17th December, 2016, a 15 year old girl named Akrity Tamang from Ambootia tea garden of Darjeeling had been found dead after missing for 32 days at a nearby hill spring. She had been raped and murdered and was ultimately disposed near the spring. While there were protests in Kurseong, and other localities in the region, on 10th November, 2017, all the three arrested were out on bail from Kolkata high court.

One wonders, if the same injustice would happen to Gini Biswakarma, and if she would be merely reduced to another name whose death and sexual violation did not bring in any form of justice, just like Thangjam Manorama or Akrity Tamang.

In the case of Gini Biswakarma, the sole arrested Rahul Roy belongs to the Bengali community. A communal divide has, therefore, been instigated and propagated by fundamentalist and opportunistic forces, many of whom are trying to endow it with a Bengali vs Gorkha colour. This can further add to the enmity between the two communities, and is hence destructive in nature. The terrain of Dooars is a heterogeneous mix of different cultures, languages and ethnicity comprising of Gorkhas, Bengali, Biharis, Marwaris and more than 100 ethnic tribes, just because one rapist belongs to a particular community or a tribe, an entire community or tribe should not be labeled as rapists. Rape culture must be thoroughly resisted irrespective of caste, class, creed, race, gender etc, and the communal gaze avoided within such struggles. Blaming the entire community, and creating a communal divide is the game of those in power to divert and divide the oppressed.

As in other instances, Gini’s death has also witnessed issuing of statements from political leaders and the general civil society, where the language of victim-blaming renders transparent the patriarchal mindset. For example, on February 2nd, 2022 there was a small token protest program at Kalimpong,  where a local leader was heard saying that “women should enter their homes early so that their safety is prioritised. “Some people questioned why Gini Biswakarma had gone out with Rahul Roy in the first place. Victim blaming, thus, becomes the most prevalent form of efforts to further dilute the voices that dare to speak against such practises of hierarchy and discrimination. This, too, is a reflection of the embedded patriarchy in our society.

While there are simultaneous protests programs going on in different places of Hills and Dooars, we must all realise that the fight against such culture of rape and patriarchy must go on continuously. It should not be just limited to online campaigning. A relentless and long-term battle against patriarchy must be waged, which interrelates and intersects itself with class, caste, sexuality, race, gender, nationality etc. Meanwhile, the fight to ensure justice for Gini Biswakarma must not cease to exist, because justice delayed, is justice delayed.

(The author is a social and cultural activist from Darjeeling)