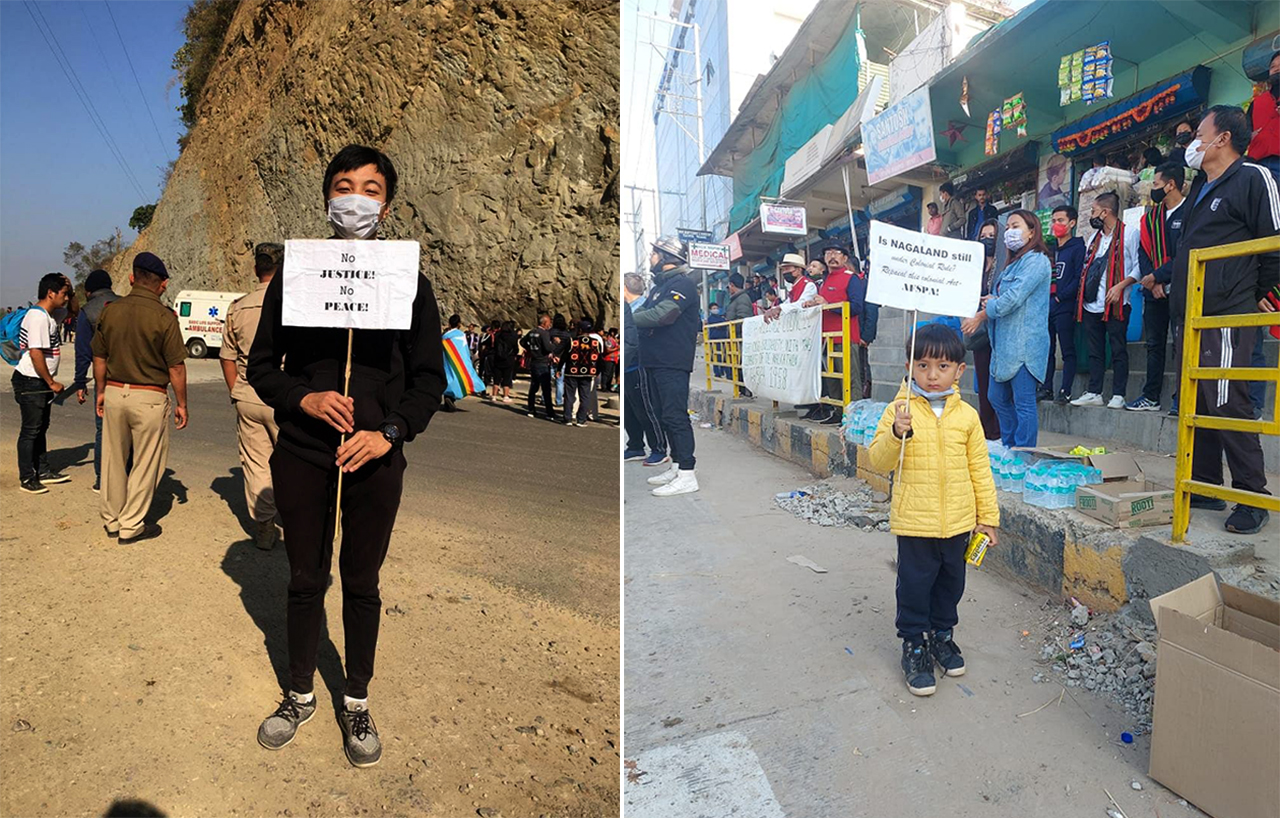 Repeal AFSPA and Justice for Victims of Mon Massacre: Citizens on two-day protest walk in Nagaland

Hundreds of people in Nagaland began a two-day protest-walk on Monday, from the state’s commercial hub Dimapur to the state capital Kohima, demanding the repeal of Armed Forces (Special Power) Act, 1958 (AFSPA) and seeking justice for the 14 civilians who were shot dead by security forces in Mon district on December 4, 2021. 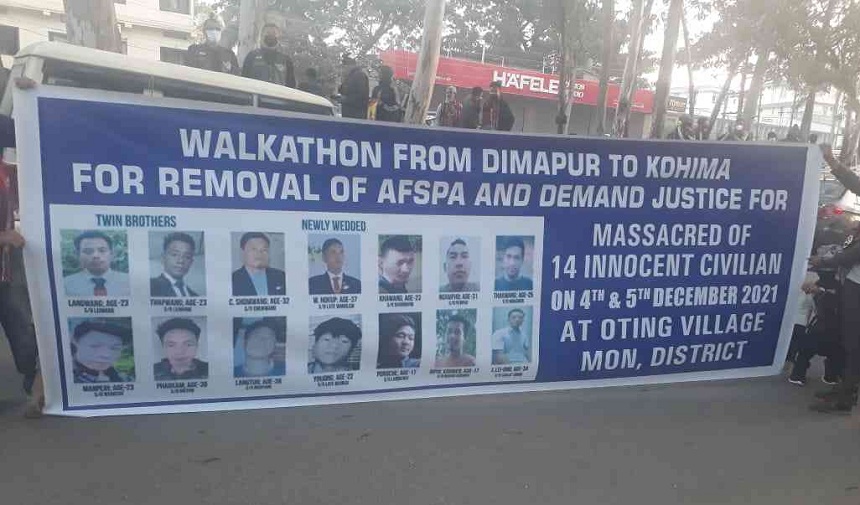 The 70-km long protest march has been called and led by various Naga civil society organisations. Hundreds of people from all walks of life participated in the march and walked holding placards and banners against AFSPA, and raising slogans seeking justice for the victims of the Oting massacre. 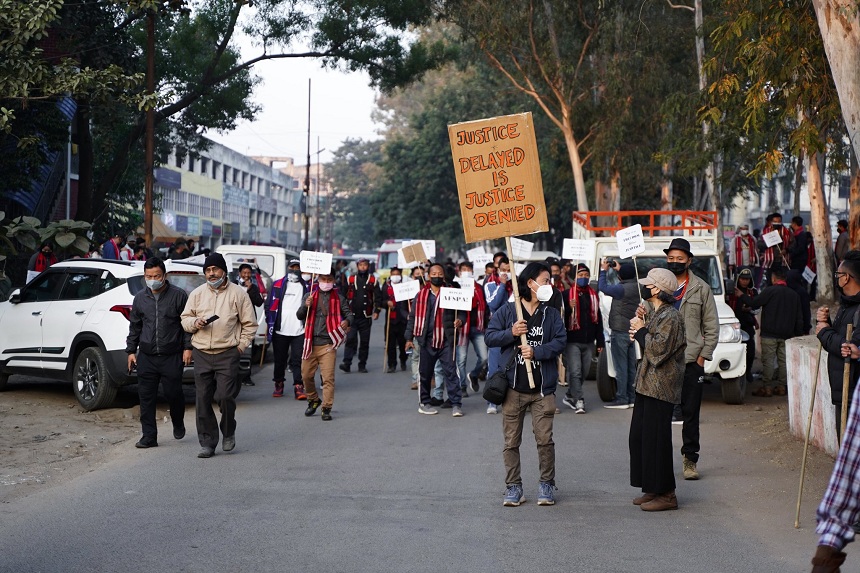 The march will culminate at Kohima, where the leaders of the protest march would submit a memorandum seeking repeal of the AFSPA at the earliest, to the union government through the state’s acting Governor Jagdish Mukhi. 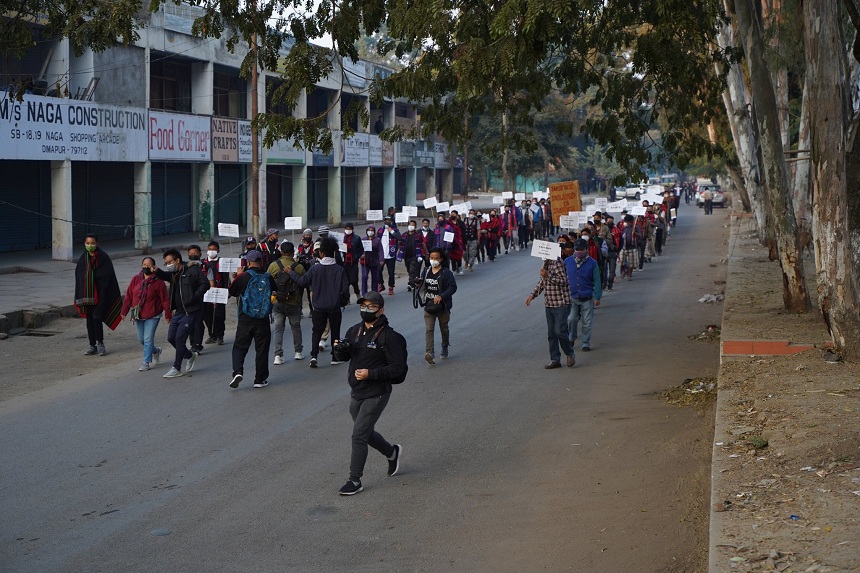 After the killing of 14 civilians in December, the whole of Nagaland erupted in rage, and the state witnessed massive agitations demanding repeal of AFSPA and punishment for the security personnel involved in the massacre. Even the Chief Ministers of Nagaland and the neighboring  state of Meghalaya, both allied to the Bharatiya Janata Party-led Union government, called for the repeal of AFSPA, as did the opposition politicians, human rights activists, and affected families. Several organisations, including the Naga People’s Front (NPF), Naga Students’ Federation (NSF) and the ruling Nationalist Democratic Progressive Party (NDPP) have also been demanding immediate repealing of AFSPA from the entire northeastern region.

The villagers in Oting, home to 12 of the 14 civilians who were killed on December 4, have rubbished the official version of events and termed the army’s operation a “massacre”. They have also declared that Indian armed forces will not be allowed to enter the Oting village’s jurisdiction indefinitely. Even the state police had alleged that the “intention” of security forces was to “murder and injure civilians.”

It is to be remembered that after the brutal killing of unarmed civilians was exposed, the union government, through a statement made by the union Home Minister in Parliament, has expressed ‘regret’ for the loss of lives of the civilians, though, it has not apologized to the people of Nagaland or to the family members of those killed by its army. A careful reading of the statement will make it clear that Delhi has set the narrative for justification of the massacre. The Union Home Minister, Amit Shah, while regretting the loss of civilian lives, had stated that the vehicle the coal mine workers were traveling in, was ‘signaled to stop’ by the Assam Rifle jawans, and it was fired upon only when it ‘tried to flee’. He had further said the incident will be investigated and action will be taken as per the law. And the LAW in this case is the notorious Armed Forces (Special Power) Act, 1958. In areas declared ‘disturbed’, under this law, the security forces can even shoot to kill with impunity on mere suspicion. Only Delhi has the power to sanction prosecution of the army personnel in court for their actions. The union government, in Parliament, provided no reasons as to why nearly the whole state of Nagaland is declared ‘disturbed’ after every six months for the last six decades. The ‘disturbed’ area status means, the lives of people there are governed by the dictates of the Indian Army who face complete impunity thanks to the AFSPA.

To the people in Nagaland, such killing of civilians by the armed forces is not an act of aberration, or a case of mistaken identity or a botched up anti-insurgency operation, as is described by the mainstream media, political parties, the government and the Army itself, whenever such incidents occur. To the people of Nagaland, this is how, historically, since 1958, the Indian State has responded to their political aspirations. For them, this is what everyday life entails.

The SIT constituted by the state government to investigate the massacre and submit its report within a month failed to do so and has been granted an extension. Meanwhile, the Union government has again declared the entire Nagaland as a “disturbed area,” and has extended Armed Forces (Special Powers) Act for another six months in the state. Interestingly, this announcement comes days after the Nagaland Legislative Assembly convened a special one-day session on 20 December to deliberate on AFSPA, and the house had unanimously resolved to demand its repeal. The extension is a manifestation of the utter disregard the Union government has for the sentiments and aspirations of the people of Nagaland, and for the people of the northeastern states, in general.

The peaceful protest march by the citizens is another reminder to the Indian ruling classes about the sentiments and aspirations of the Naga people.