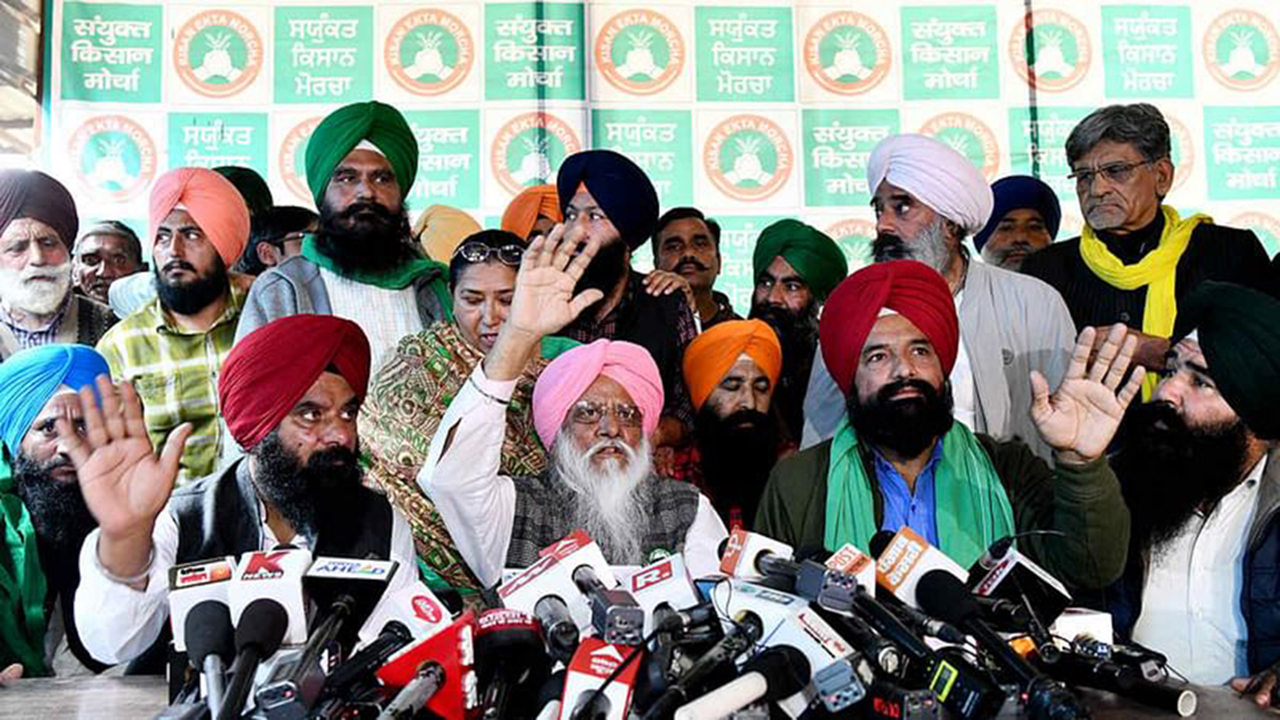 Samyukta Kisan Morcha will not contest the Punjab Assembly elections

Samyukta Kisan Morcha (SKM) have clarified that they will not contest the Punjab Assembly elections. It has declared that no person or organization should use the name of SKM or 32 organizations joint forum in Punjab for elections.

Chandigarh, Dec 25, 2021 : Samyukta Kisan Morcha (SKM), umbrella body of the farmers’ unions that spearheaded the protests against the Centre’s farm laws, on Saturday have clarified that they will not contest the Punjab Assembly elections, which are due early in 2022. This information was given by the leaders of the 9-member coordination committee of the Morcha, Jagjit Singh Dallewal and Dr Darshan Pal.

They said that the SKM, which is a platform of more than 400 different ideological organizations across the country, is formed only on the issues of farmers. There is no call for the boycott of elections and even no understanding of contesting elections. They said that it was made by the people to get their rights from the government and after the repeal of three agricultural laws, the struggle has been postponed, the remaining demands will be decided in the meeting to be held on January 15, 2022.

The forthcoming national meeting of SKM schedule for January 15 shall take a final decision on whether farmers organisations and leaders who take part in elections can remain within SKM.

Earlier today, in Chandigarh, a group of 22 farmers’ unions from Punjab, who had joined the Samyukt Kisan Morcha (SKM) to protest against the Centre’s three agricultural laws, have announced to come together and form a political party that would contest the Punjab Assembly election. The new party has been named Samyukt Samaj Morcha (SSM).

A new 'Samyukta Samaj Morcha' is formed for contesting Punjab Assembly elections. 22 unions have taken this decision. We need to change the system and want to appeal to people to support this morcha: Farmer leader Balbir Singh Rajewal in Chandigarh pic.twitter.com/VK3ctiVKvk

Samyukt Kisan Morcha clarified that it has nothing to do with some farmers organisations of Punjab to form the “Samyukt Samaj Morcha” for contesting assembly elections. The SKM stands by its policy of not allowing any political party to use its banner or stage. Any attempt to use the name of SKM for elections will constitute a grave violation of Morcha’s discipline. The forthcoming national meeting of SKM schedule for January 15 shall take a final decision on whether farmers organisations and leaders who take part in elections can remain within SKM.

Bharti Kisan Union (EKTA UGRAHAN ), which is one of the largest farmer unions in Punjab, has categorically announced that it will not participate in the elections in any way. BKU (Ekta Uhrahan) will neither participate in elections nor will it support any party. They have not issued any call for boycott of elections either.

The organisation has stated that struggling farmer unions instead of getting entangled in the vote politics of the rulers should concentrate on the farmers issues. State President Joginder Singh Ugrahan and the General Secretary Sukhdev Singh Kokri Kala of the organisation said that the farmers ‘struggle against the farm laws has also proved that the rights and interests of farmers cannot be saved and ensured by sitting in the Parliament or Assemblies, rather the same can be achieved only by struggle in the open at mass and community level. The leaders said that still only three farm laws have been repealed whereas the major issues like the MSP and total  loan waiver are pending and are yet to be resolved . For solution of these problems farmers should always rely upon the mass struggles.