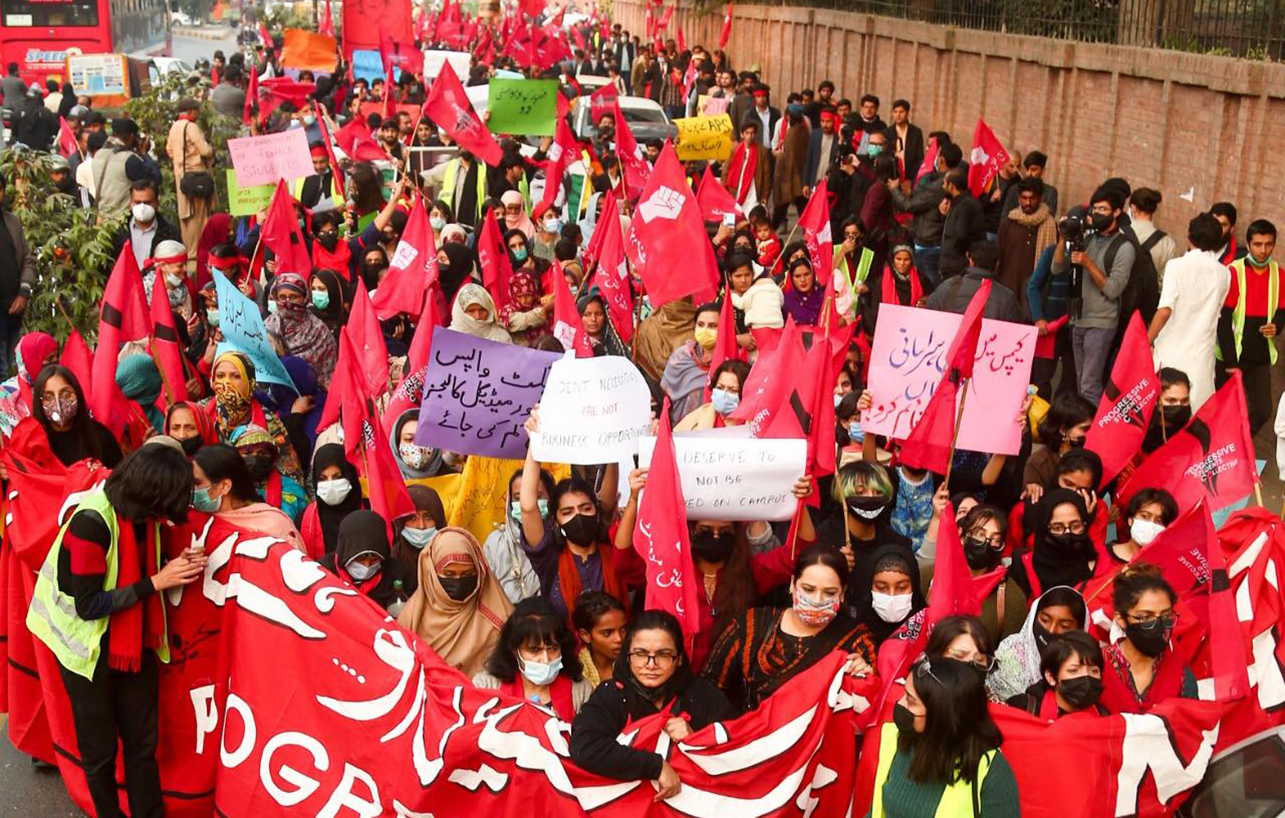 A report on the Student Solidarity March 2021 held in many cities across Pakistan on Friday demanding lifting of the ban on campus politics and student unions in universities and colleges in Pakistan.

Thousands of students from universities and colleges across Pakistan took to the streets for restoration of their democratic right to form student unions in campuses, and demanded an increase in the education budget to 5% of the country’s GDP, among other things. The Students Solidarity March 2021, on November 26, 2021, was organized by the Progressive Students Collective, a students organization based in Pakistan with its members from various educational institutions across the country, was held in Islamabad, Lahore, Karachi, Multan, Quetta, Faisalabad, Hyderabad, Gilgit, and other big cities of Pakistan. 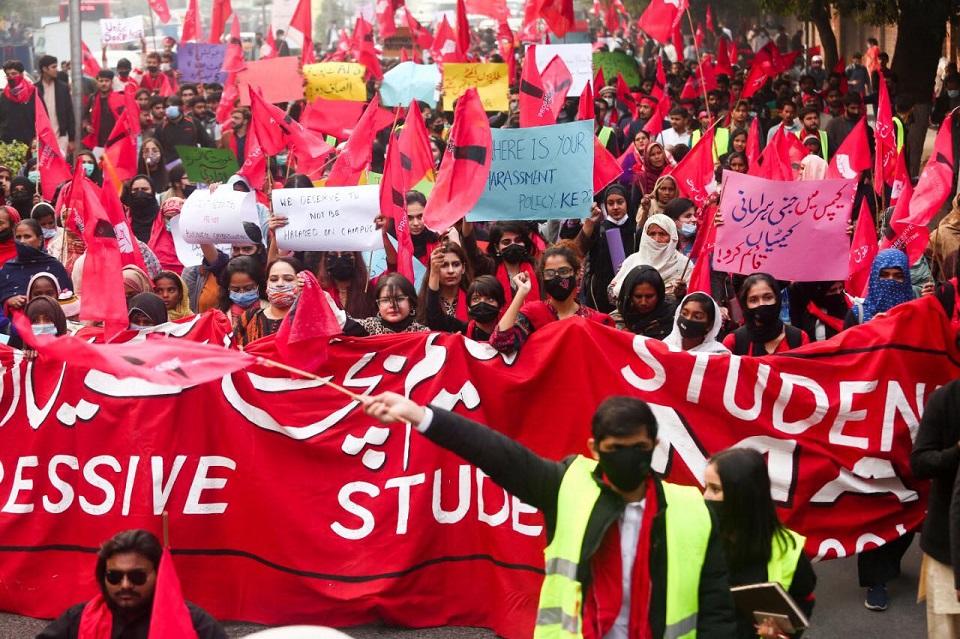 According to members of Student Solidarity March 2021, they are forced to take to the street because they have no platform anymore to voice their concerns. The students in Pakistan are required to sign a controversial affidavit before getting admission to most educational institutions. This restricts them from joining any union, taking part in politics, or holding protests of any kind on campus, whereas the law of the country allows no official ban on such activities. 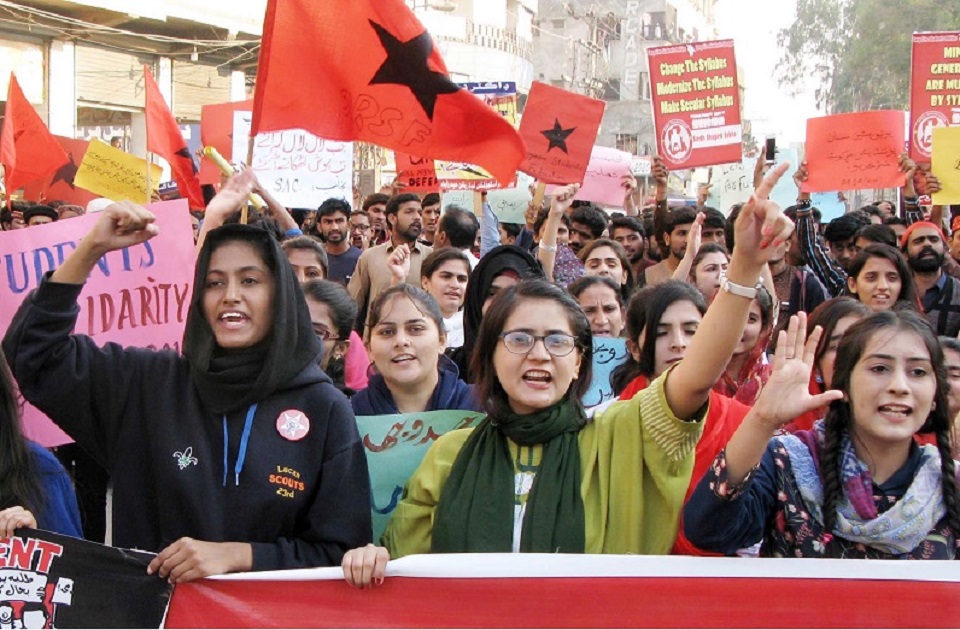 The demands of Student Solidarity March 2021 include –

This is the second edition of the march after it came out first in 2019 to voice the same demands.

Background to the Student Solidarity March

The students of higher education in Pakistan are for the past few decades in crisis in the form of rising cost of education and a drastic decrease in job opportunities after getting college and university degrees. Not only is it becoming harder to afford college education, but rising education expenses are also leaving students and their families in more debt  with limited job opportunities.

But since the ban on student unions and political activism by students in 1984 under the dictatorship of General Ziaul Haq, in most campuses across the country the vibrant democratic and progressive students’ movement of the 70s has collapsed and subsequently activism in campuses has taken the form of single-issue groups. There is a ban on any kind of political activity by students on campus and those who have tried to raise their voice for rights, have been rusticated, abducted and sometimes killed by fascist groups. The state by using anti-terror laws has been suppressing dissenting students’ voices. Most of the campuses are now dominated by right-wing organization like Islami Jamiat-e-Talba  and Muslim Students Federation which continue to operate in universities under state patronage.

Given this continual crisis, both economic and political getting worse in recent years, progressive and democratic students’ groups started organising on campuses across the country. Students are agitating in different campuses on issues like fee hikes, sexual harassment, against the abduction of a number of students and for better housing and affordable transport facilities. Their main demand has been lifting of the unconstitutional ban on student unions and political activism in the campuses.

On November 2 and 3, 2019, in a meeting hosted by the Progressive Students’ Collective, more than twenty students’ organisations from all across the country formed the Students’ Action Committee to demand revival of student unions and raise other pressing issues in higher education. They decided to launch a nationwide movement for revival of student unions, against the cut in educational budget, occupation of their campuses by paramilitary forces, poor investigation of sexual harassment cases, and ban on freedom of expression. It also decided that the first public activity under the banner of Students’ Action Committee would be the Students’ Solidarity March on November 29, 2019.

We are marching against the system which labels us as "Terrorists" for demanding clean water on campus. Puts us behind bars for opposing dictatorship of administration on campus. We demand our right to exist with dignity.
Poster By: @jaquelintzin#StudentsSolidarityMarch pic.twitter.com/elAOh9MlY5

The massive success of the march in 2019 sparked a lively debate in society on the students’ movement, the slogan of the march “Surkh hoga, surkh hoga – Asia surkh hoga! (It will turn red, it will turn red – Asia will turn red) energised the student community in campuses across Pakistan. The spontaneous participation of students in this year’s Student Solidarity March, and the enthusiasm and interest that it has generated even among other sections of the society, are like a ray of hope for the revival of progressive student politics and democratic activism in Pakistan in coming years, if not days. 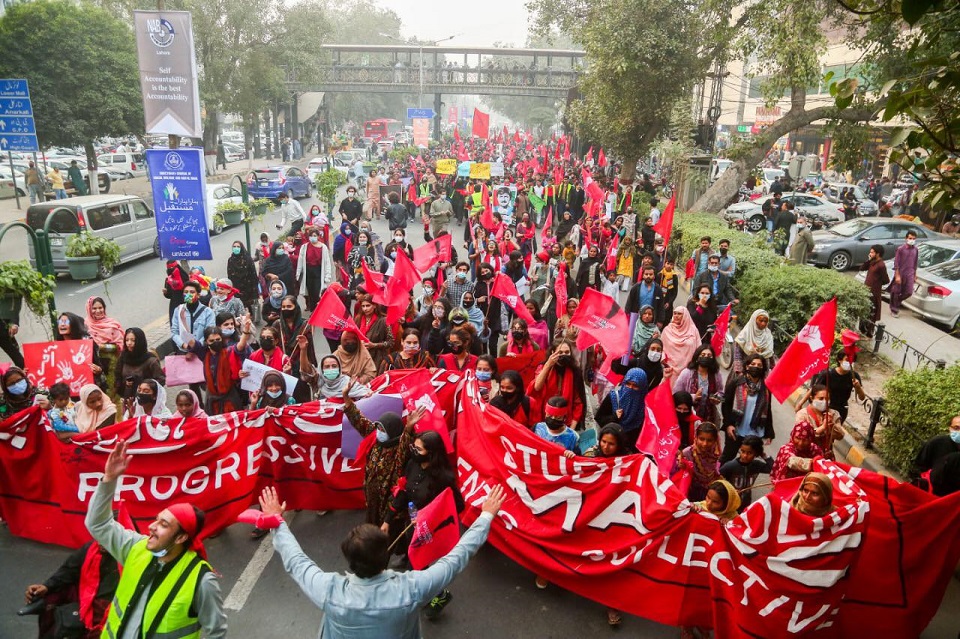