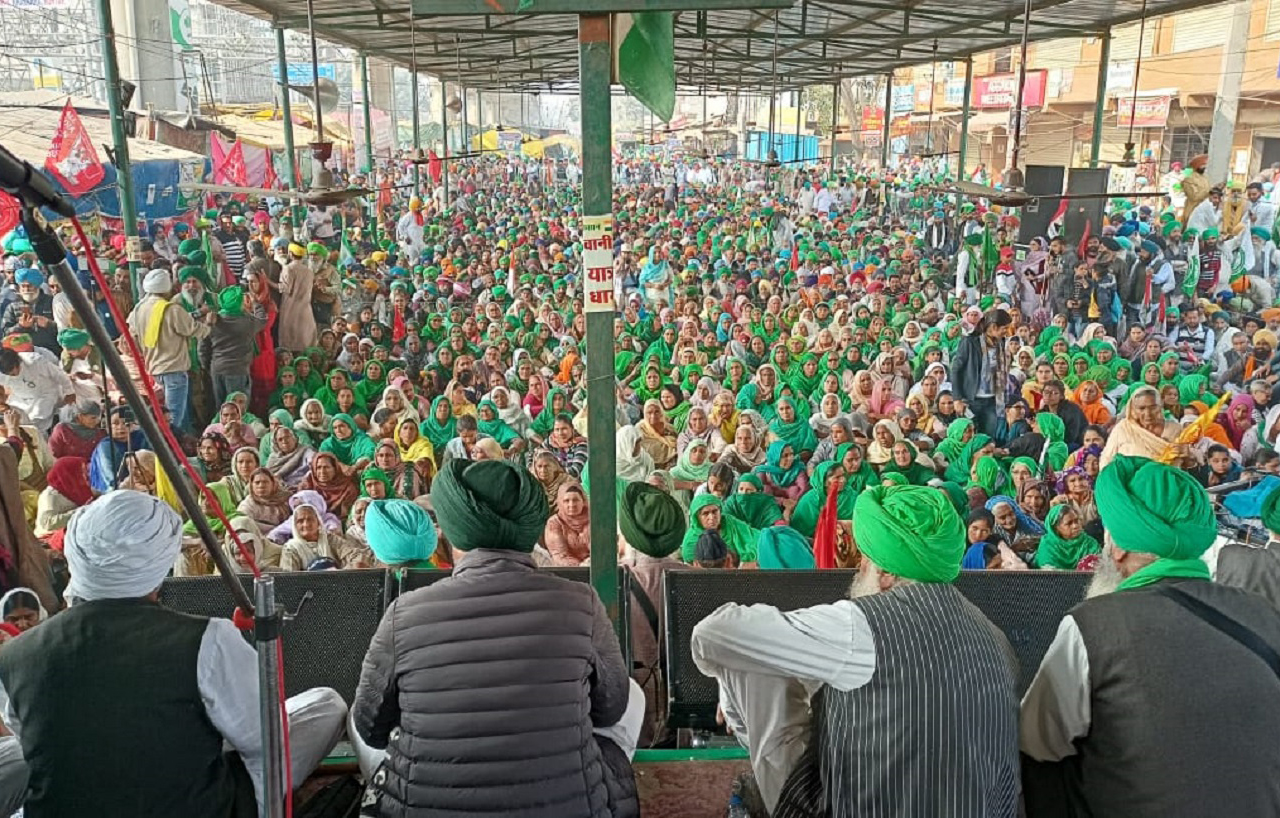 On November 26 2021, the farmers’ movement completed one year of its historic struggle with lakhs of farmers, joined by workers, youths, women and common citizens in nationwide programs. The day will forever be remembered as one of the greatest moments of a people’s struggle in history. This day marked twelve long months of the farmers’ struggle, with numerous victories, which seemed unlikely, and even impossible, when the movement began. However, with a will and determination to continue to fight for the unfulfilled demands of the farmers, the “impossible” was transformed into a reality. 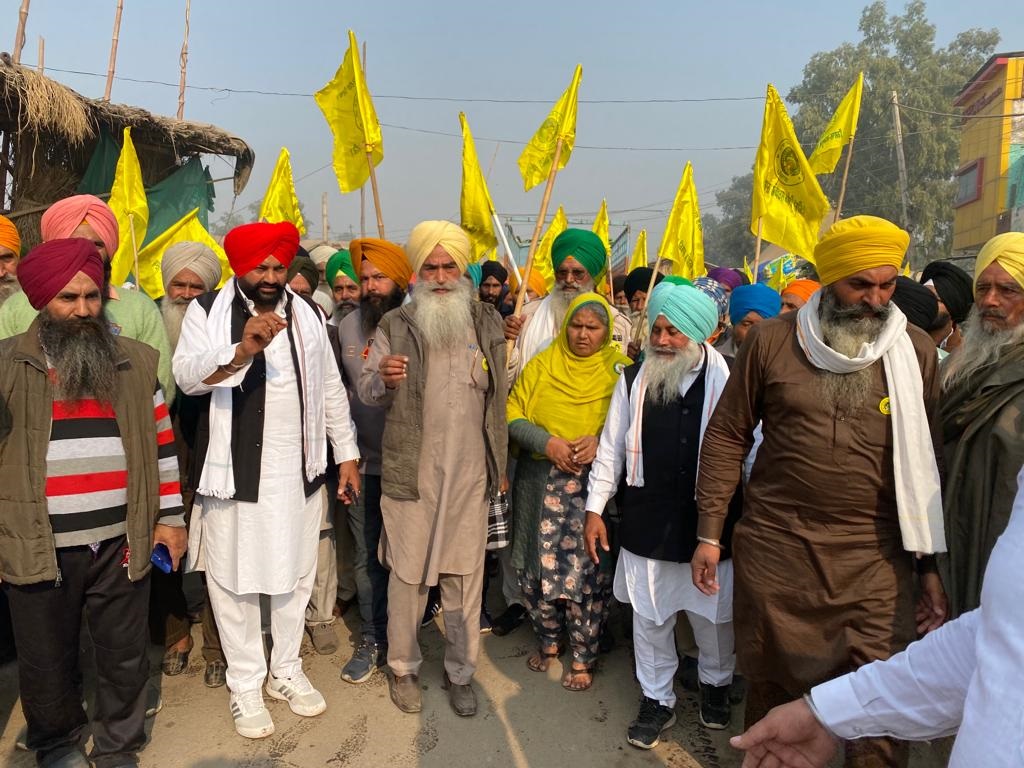 The farmers across the country celebrated their victory after the Prime Minister’s announcement for the repeal of the three anti-farmer laws, while raising the still-pending demands of the movement. The Samyukta Kisan Morcha, in its letter to the Prime Minister dated November 21st, 2021, had raised six demands, namely, legal guarantee of MSP for all produce based on C2+50% formula, withdrawal of draft “Electricity Amendment Bill, 2020/2021”, removal of the penal provisions on farmers in the “Commission for Air Quality Management in the National Capital Region and Adjoining Areas Act 2021”, withdrawal of false cases against the farmers over the course of the movement, dismissal and arrest of Minister of State Ajay Mishra Teni, and compensation and rehabilitation to the families of the martyrs of the farm movement and allocation of land to build a memorial in their memory at Singhu border.

Various trade unions, student and youth organizations, women’s organizations, civil society organizations, and other unions came together in support of the farmers’ movement. Large assemblies were held at Singhu, Tikri, Ghazipur and Shahjahanpur morchas, which were attended by SKM leaders. 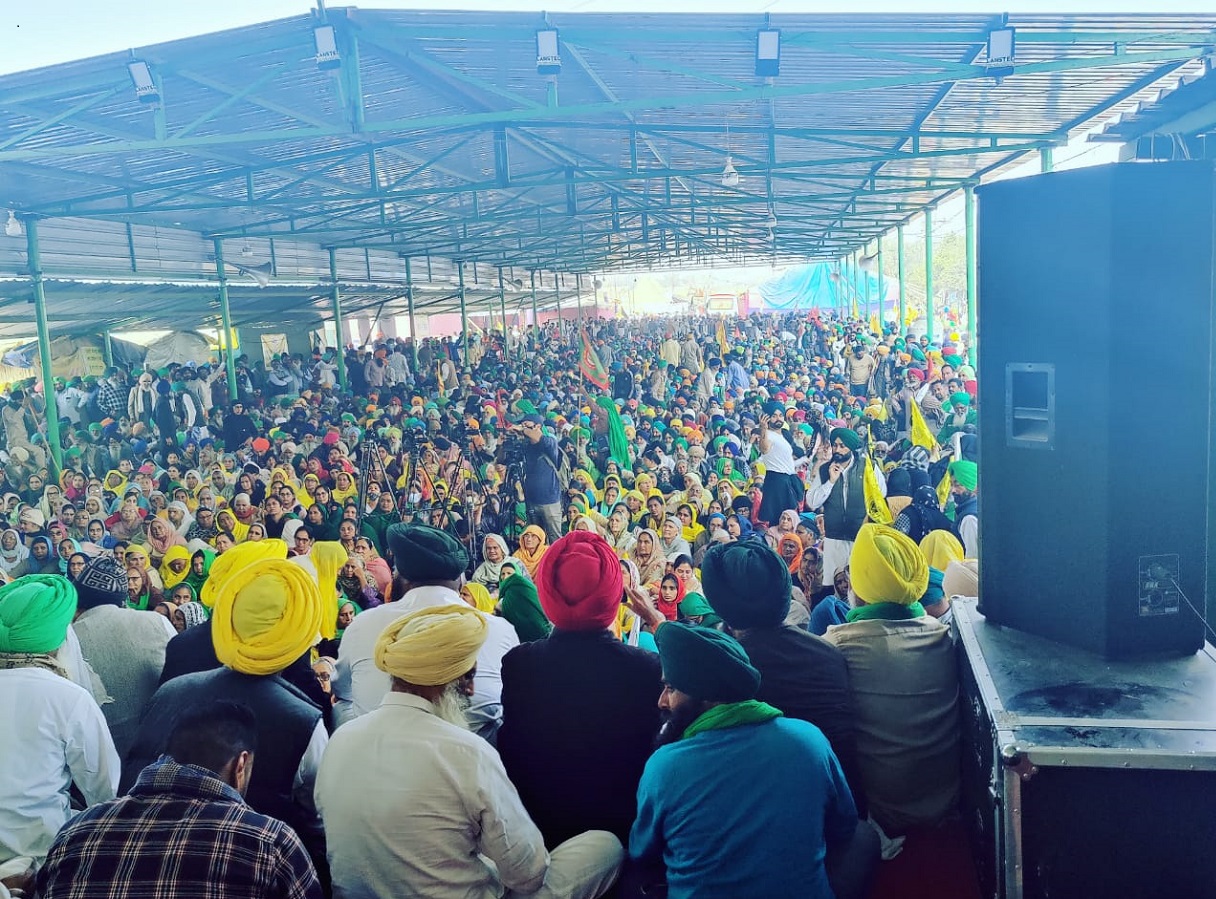 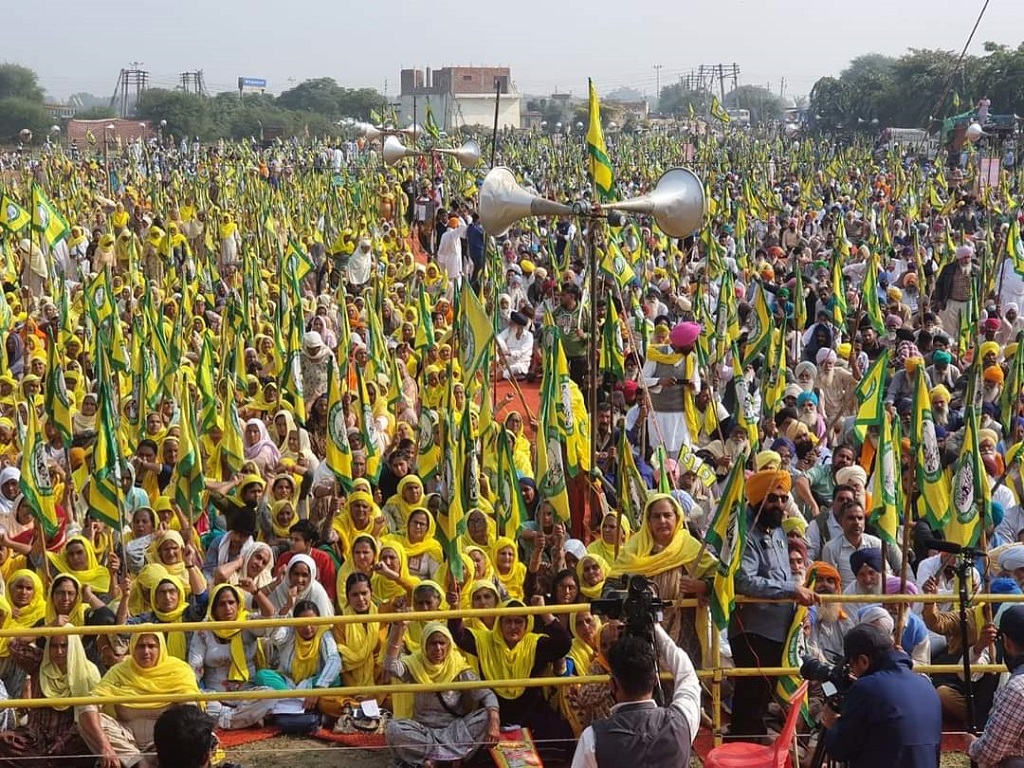 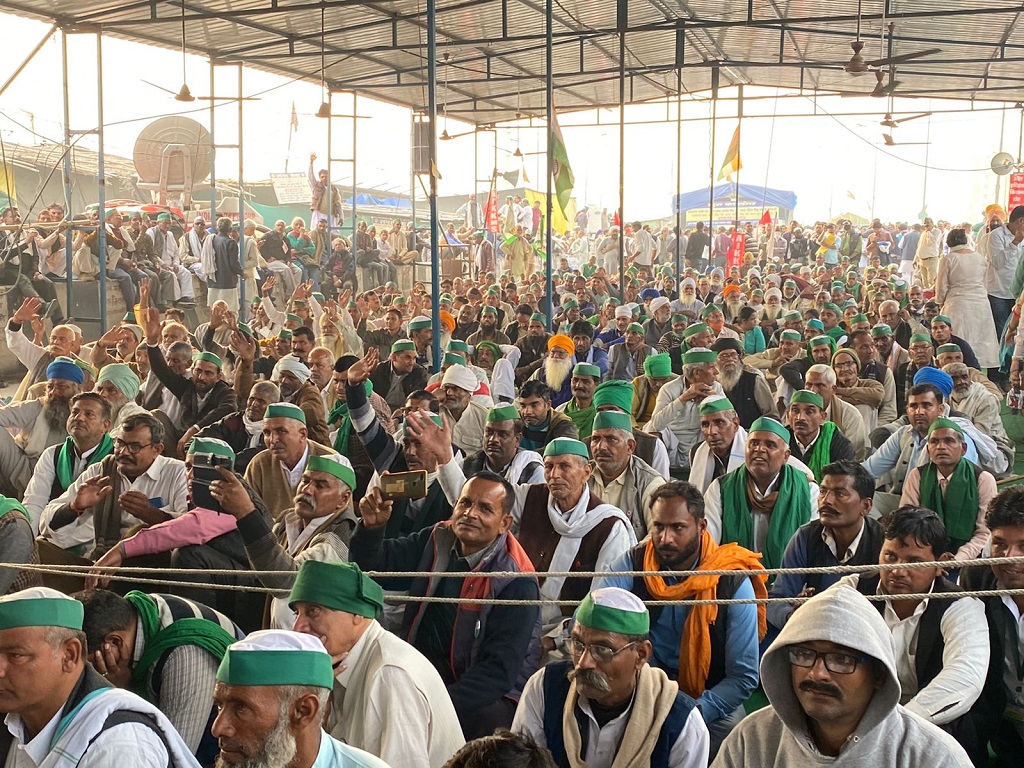 Lakhs of farmers came together in support of the farm movement at the programs held in various states. In Karnataka, farmers and workers organized chakka jams, and blockaded state highways in Bangalore, Srirangapatna, Chickballapur, Belgaum, Vijaypura, Bhagewadi. A vehicle rally was also held in Chickballapur. Protest programs were also held in Mysuru, Kolar, Devangere in Karnataka.

Highway Jam at Shimoga in Karnataka

In West Bengal, SKM West Bengal held a massive public rally at Y Channel, Dharamtalla, Kolkata which was followed by a huge procession from Dharmatalla to Sealdah station. Yesterday, ‘Bengal against fascists RSS-BJP’, a citizens forum, had also organised a human chain from Moulali to Esplanade in solidarity with the farmers’ struggle and their still unfulfilled demands. 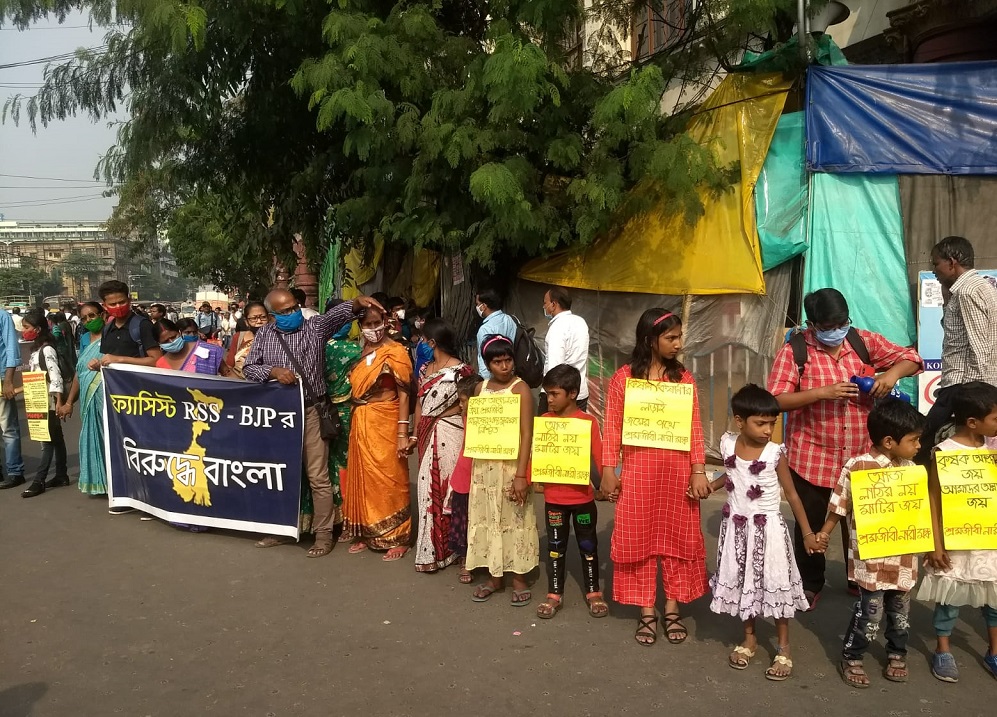 Human Chain in Kolkata on 25 November

In Patna, a joint procession of farmers and workers was organized from Buddha Smriti Park to the collectorate, which submitted a memorandum of demands to the District Collector. Protest programs were also held in Sitamadhi, Rohtas, Bhojpur, Khagaria, Begusarai, Samastipur, Buxar, Darbhanga, Gaya, Arwal, Nalanda, Shekhpura, and other districts of Bihar. 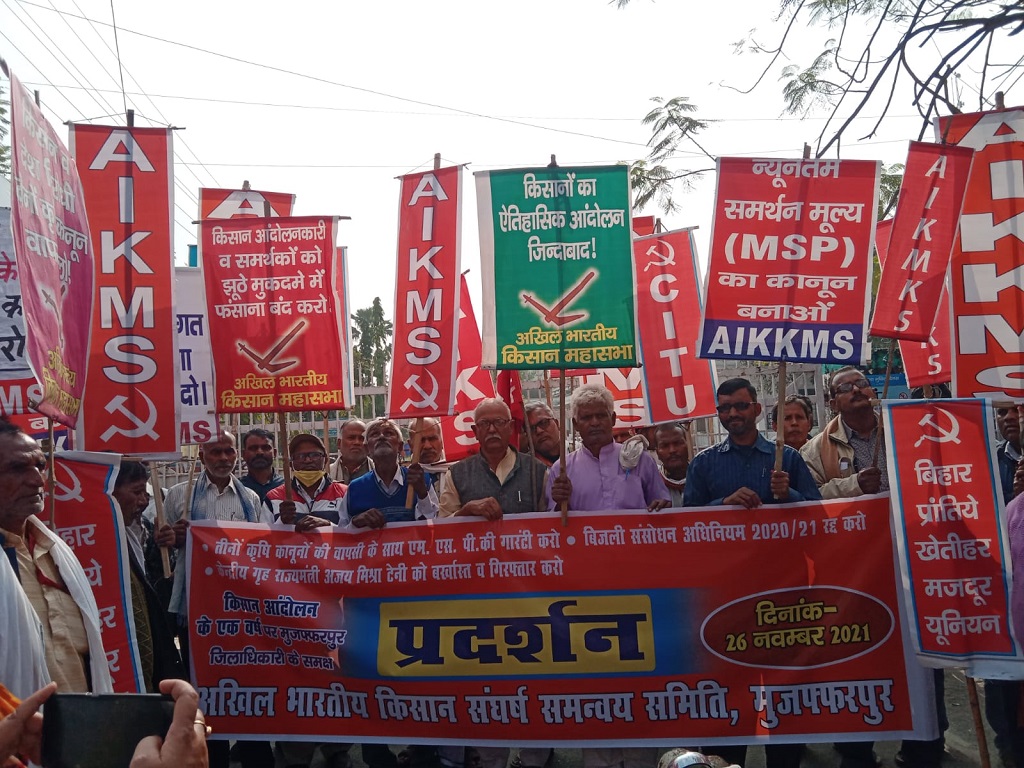 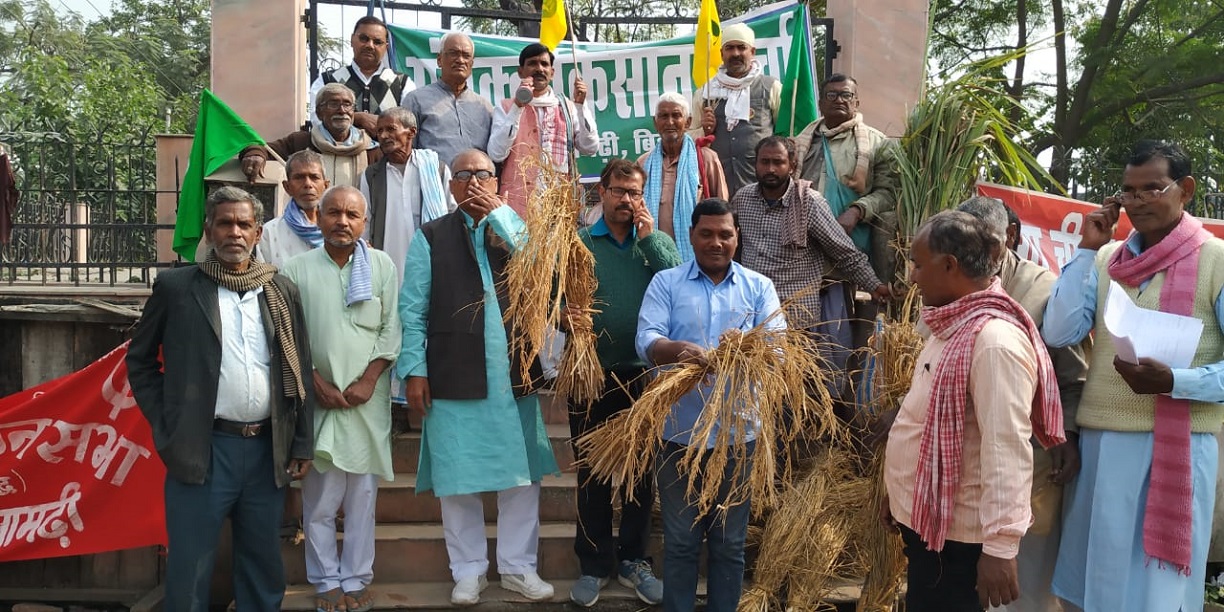 A massive tractor rally was held in Raipur. In Bijapur district of Bastar in Chhattisgarh, tribal peasants observed the anniversary of the farm movement with Dharnas at Silger and Gangalore. At both the places tribals are protesting against Adani and other corporates, and the deaths of four tribals in police firing on May 16th, 2021.

Protests were held in Gunturu, Vijayangaram, and other places in Andhra Pradesh. Protest events were also held in Tamil Nadu, Jharkhand, Telangana, Odisha among other states.

Numerous international organizations lent their support and solidarity to the movement. Letter of support was issued by international farmers’ organization La Via Campesina. “India’s farmers have inspired the world with their resilience. They have shown us what a united struggle of the working class and the peasantry can achieve even in the face of all adversities. Over the last year, this protest has stitched alliances with workers unions and other social movements and issued inspiring messages of solidarity, communal harmony and unity among rural societies”, said the organization in its letter of support.

Solidarity events are also being held and planned in various countries. In the UK, a Kisan Demonstration is planned in front of the High Commission of India in London today. Tomorrow, a “1 Year Rally and Vigil” is planned at the same place. A “Kisan Sleep Out” will also be held in Letchworth City tomorrow. In New York, a “1-Year Anniversary Maha Kisan Victory Car Rally” will be held tomorrow.

The above report is based on SKM’s press release. All images sourced from SKM press group