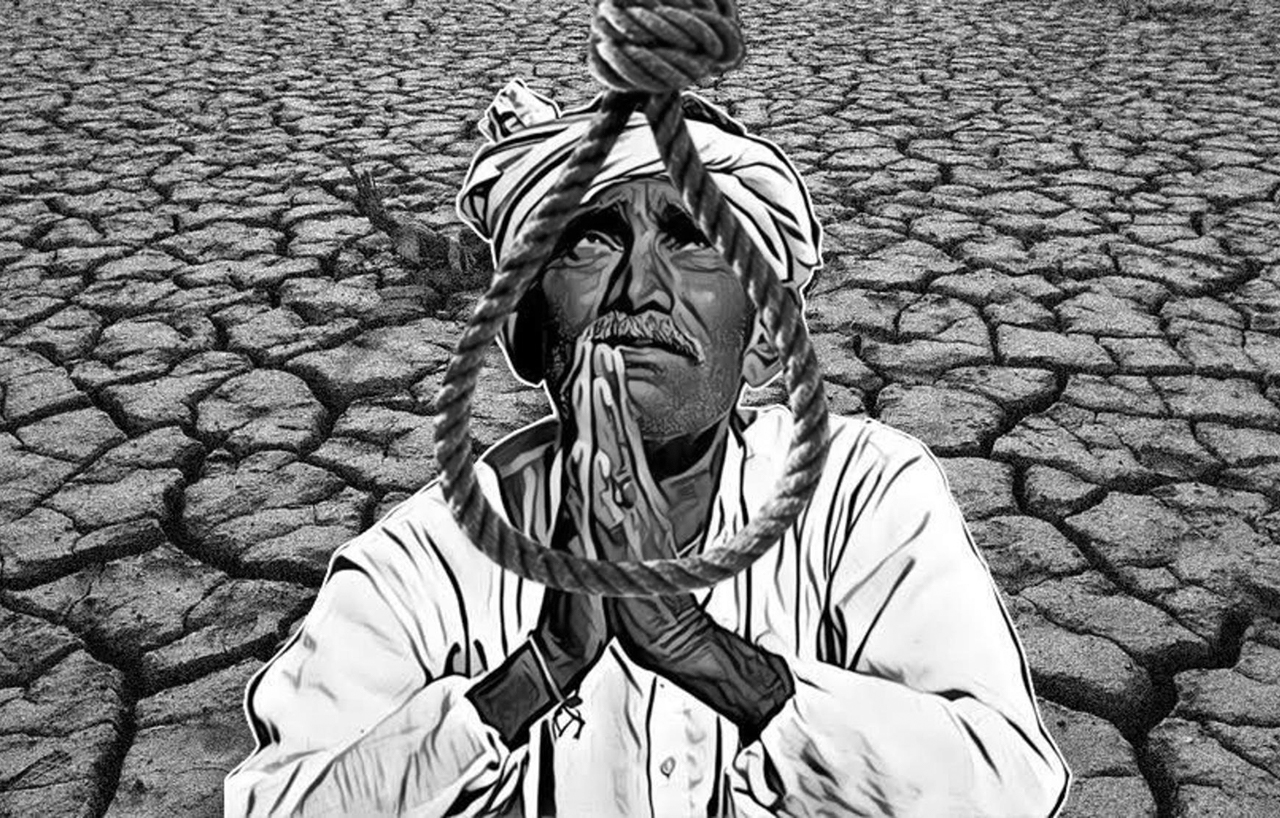 The recent data of the National Crime Records Bureau (NCRB) on Accidental Deaths and Suicides in India seems to be highlighting that the number of farmer suicides in the country is witnessing a decline. Mainstream media is clamouring loudly that the number of farmer suicides has come down. According to these reports, more farm workers and other sections of people are committing suicide in comparison with farmers. The number of farmer suicides in the country declined from 10356 in 2018 to 10281 in 2019 whereas the figures for agricultural labourers went up from 30132 to 32559. To probe the root of this matter, it is pertinent to analyse the issue of farm suicides in the state of Punjab where door-to-door surveys have been conducted to address this serious issue of farm suicides. Reports from three universities in Punjab – Punjab Agricultural University Ludhiana (PAU), Punjabi University Patiala and Guru Nanak Dev University Amritsar – amply make clear the number of suicides and the reasons thereof. Startlingly, the NCRB in 2015 had published elaborated data on farmer suicides, including the reasons for suicides. However, the recent report of NCRB has not disclosed these classifications. 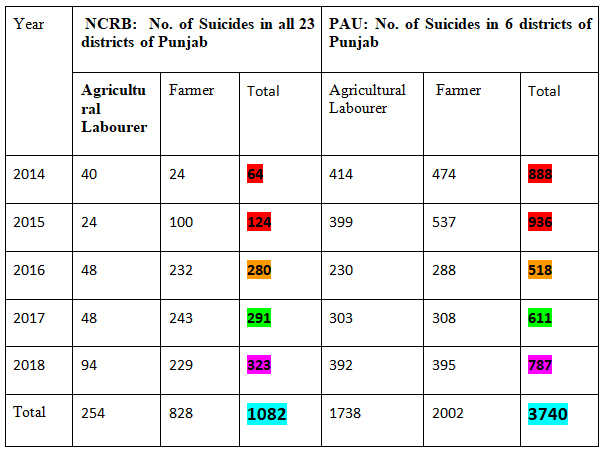 The study ‘Farmers’ and Agricultural Labourers’ Suicides in Punjab’ was conducted by PAU, Ludhiana based on the census of six districts namely, Ludhiana, Moga, Bhatinda, Sangrur, Barnala and Mansa. As per NCRB report, there were 1082 suicides of farmers and agricultural labourers in the whole state of Punjab during 2014 to 2018, while the PAU study reveals that even in the six districts, the number of these suicides was 3.5 times (3740 suicides) during this period. NCRB data shows that there were 64 and 124 suicides in Punjab in the year 2014 and 2015 while PAU report shows that the number of these suicides was 888 and 936 in only six districts of Punjab. Likewise, there were 518 suicides against NCRB’s data: 280 in 2016, 611 against 291 in 2017 and 787 against 323 in 2018. It is pertinent to know that out of a total 12729 villages of Punjab; only 2518 villages have been included in this survey of PAU. If the survey of the remaining 10211 villages of Punjab is undertaken, the reality will be revealed in its entirety. No university or institution has conducted any survey or study on this topic since 2018; however, according to the NCRB, there were 302 suicides in 2019 and 257 in 2020. The survey of three universities reveals that around 900 to 1000 suicides of farmers and agricultural labourers are taking place in Punjab every year while the NCRB data shows 200 to 300 suicides annually. The census of three universities revealed that between 2000 and 2018, about 16,600 persons committed suicide in the farm sector of Punjab, out of which about 9300 were farmers and 7300 were agricultural labourers. In Punjab, about two farmers and one agricultural labourer end their lives daily. An increasing debt burden is the major reason for these suicides. Despite the fact that the phenomenon of farmer suicide has taken a critical turn, the tone and tenor of popular discourse is working hard to obscure the truth.

The trend of large-scale suicides in India can be seen since the late 1990s in the regime of new economic policies. According to NCRB, 1095219 people committed suicide in India between 1997 and 2006, out of which 166304 were farmers. The number of farmer suicides has crossed 4 lakhs since the mid-1990s. As per the reports of the previous years, the suicide rate among farmers is higher than that of other population. While 10.6 people commit suicide per lakh of the general population, there were 15.8 suicides per lakh farmers. Surprisingly, an attempt was made by those at the top to reduce the number of suicides by changing the definition of ‘farmer’. NCRB reports are mainly based on police records that do not represent the actual numbers. Many suicide cases are not on police records as people perform cremation without post-mortem or informing the police to avoid legal complications. As a result, the number of suicides is shown to be much lower than it is. According to NCRB statistics, every day, 28 people dependent on farming die by suicide in the country. Indeed, if surveys were conducted in other states as it has been done in Punjab, the number of farmer suicides in the country would be far higher than these official records.

Declining farm profitability is the prime reason behind the suicides of farmers and agricultural labourers. The widening gap between income and expenditure due to the rising cost of cultivation and comparatively lower crop prices are pushing farming families towards economic distress. In such a situation, the farmers and labourers are facing a serious crisis. This situation pushes many small and marginal farmers to quit farming.  Every day 2500 farmers are pushed out of farming in India.  Now with the new three farm laws, even big farmers would be out of agriculture. Inevitably, the process of de-peasantization will be complete and pave the way for the corporate sector.

Human labour employment in the agriculture sector is continuously declining. In India, the agriculture sector employed 74 per cent of the workers in 1972-73, 64 per cent in 1993-94 and now employs only 54 per cent of the total workers. Likewise, the share of agriculture in GDP has come down from 41 per cent in 1972-73 to 30 per cent in 1993-94 and is presently merely 14 per cent. The productivity of farm labourers is also much lower than the productivity of people working in other sectors. The privatization of health services and education and the rising cost of living has made the plight of farmers and labourers even more precarious. Despite struggling to provide costly education to children, the lack of employment opportunities has pushed the entire farm sector into a state of helplessness. These conditions and circumstances have accelerated the process of forced migration from the state.

In the era of neoliberalism, the agriculture sector has seen the withdrawal of subsidies and concessions, particularly after the formation of WTO. Capital-intensive agriculture and its concomitant policies of globalization along with the influence of the international market have resulted in farmers being systematically denied fair prices for their crops. This reduced the net profit of the farmer and they got caught in the debt trap. The main reason for the increase in debt is the fall in the real income of the farmers. Today, Punjab’s agriculture sector has a debt of Rs 1 lakh crore, which is an average of Rs 10 lakh per farm family. The interest accrued on this loan is Rs.1.25 lakh per annum. Farm debt is 200 per cent to 250 per cent higher than their income. This situation is called the bankruptcy stage. Most of the small farmers are unable to pay even the interest of the outstanding loans. As a result, debt and suicides continue to rise, but government figures conceal the ground reality of suicides.

Mere political slogans by electoral parties or manipulation of data by the government will not stop the growing incidence of farm suicides. For this to happen it is important to acknowledge and confront the agrarian crisis. As debt is the main reason behind suicides, the debt settlement or loans waiver schemes should be initiated for the farmers and agricultural labourers. In Punjab, as there was a single bread earner who lost his life in one-third of victim farmer families and half of victim agricultural labourer families, a reasonable compensation should be extended to families where suicides have occurred due to debt and economic distress. There is a need to understand the plight of the farmers who have been fighting against the new farm laws for a year. The three new farm laws should be repealed, and a legal guarantee of procurement should be given not only of ‘Minimum Support Price (MSP)’ but also ‘remunerative price’ on all 23 crops for which MSP is announced. Quality education and health facilities should be provided in government institutions. Identifying and developing crop niches in relevant agro-climatic zones and encouraging their value addition can help raise farm income. Instead of shifting people from villages to cities, agro-based units should be set up in rural areas. The large population of India can be employed only in agriculture as it is not possible to engage the entire population in other sectors of the economy. It is urgent to make the agriculture sector profitable and provide better employment opportunities to the labour force at their doorstep. At this juncture of time, the stigma of suicide must be eradicated not only on paper but also in reality along with the provision of quality life to the entire peasantry.