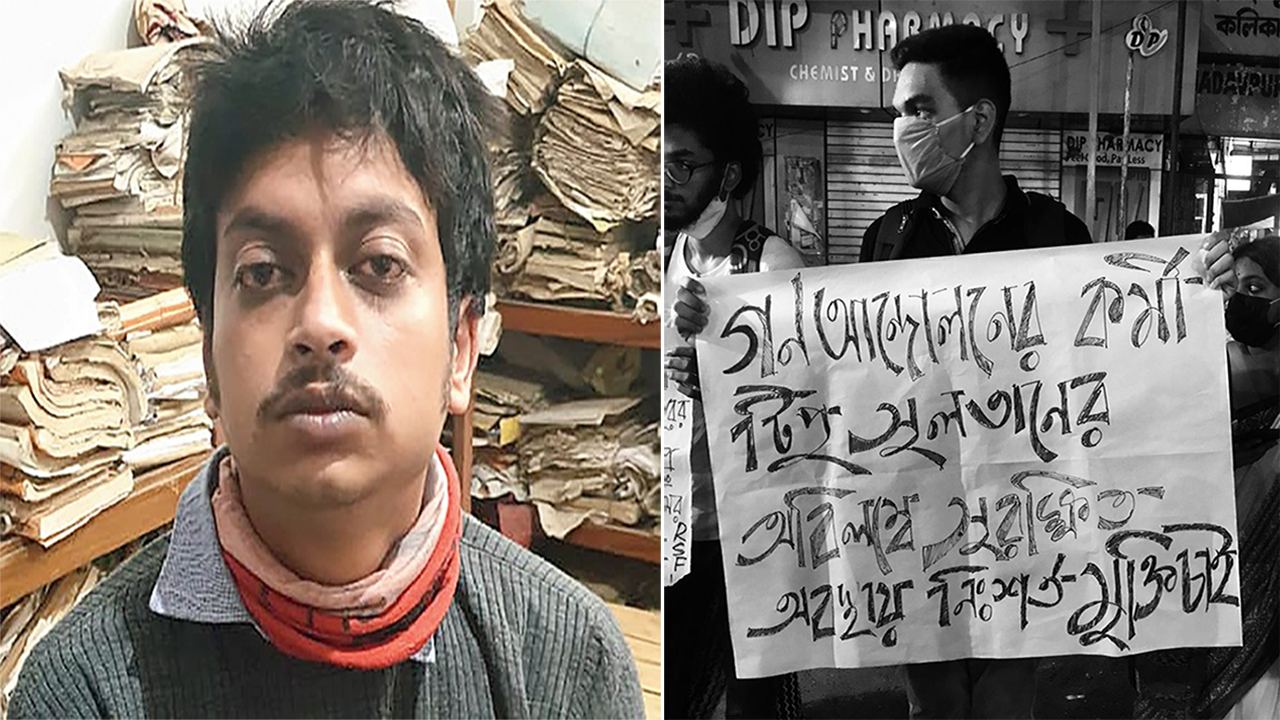 While the people of the state are busy celebrating Durga Puja festival, on 12 October, Wednesday,  the West Bengal police, in a midnight raid, stormed the house of Tipu Sultan, alias Mustafa Kamal, a former student of Visva-Bharati  and a left-political activist, and whisked him away from his residence in Gurupally, Santiniketan in Birbhum district. Tipu was produced in Jhargram court on Thursday. The court remanded Tipu in police custody for seven days.

The police showed no arrest warrant to him or his grandfather, who was the only other person present in the house at that time. Next morning, the Bolpur police station denied any knowledge of his arrest to his family members and friends when they went to enquire about his arrest. After initial denial, the police later acknowledged his arrest and it was told that Jhargram district police had arrested Tipu, in a five-year-old case. The police informed his father through a letter that Tipu was arrested on 13/10/2021 in c/w Belpahari PS Case No. 11/2016 dated  29.01.2016 and that he will be produced in Jhargram Court on 14 October. 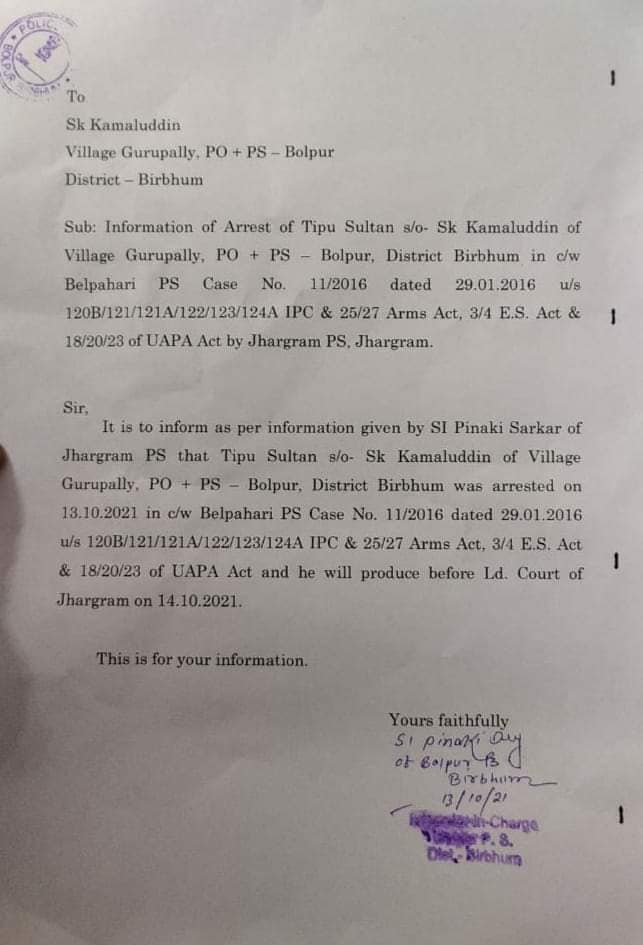 Human rights organisations like Association for Protection of Democratic Rights (APDR), Committee for the Release of Political Prisoners (CPDR)- WB, anti-fascist citizen’s forums and student organisations have strongly condemned his arrest and have alleged that Tipu has been falsely tagged to a five year old case with the sole purpose of harassing and intidiminate him into silence. They have accused the police of flouting rules. When, on the night of October 12, the police came and forcibly picked him up from his house, he was not given a custody memo as per Section 50 of the Criminal Procedure Code, the police did not say where he was being taken or whether he was arrested or not. The police didn’t give news of his arrest to his worried family and friends for the entire next day. Tipu was not produced in court within the mandatory 24 hours of his arrest and the police falsely showed his arrest on 13/10/2021. They have demanded his immediate release. 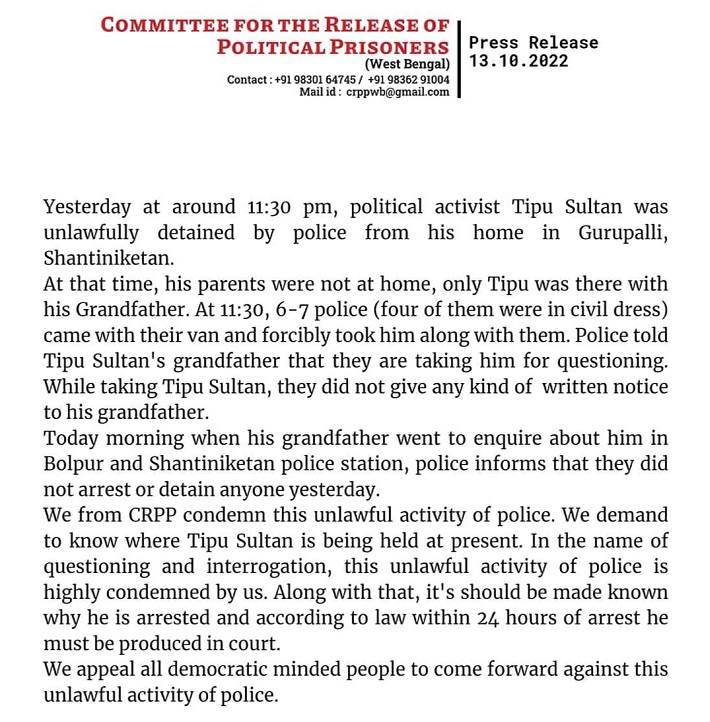 His friends and other activists allege that Tipu’s sudden arrest in the 2016 case may be linked to his activism related to a recent murder and rape incident of a child in Paruldanga which has brought the administrative failure of the state government to the fore. Tipu Sultan was one of the active participants in a people’s movement to ensure punishment to the perpetrators of the heinous crime. It is claimed that his arrest is a vengeful act to cover up the incident by silencing activists like Tipu. The method is similar to that of Yogi Adityanath’s police, which arrested activists and even journalists like Siddique Kappan in the Hathras case.

One of Tipu’s friends sarcastically pointed out :

January 2016! We were college-going kids holding street corners. And weapons? The only weapons we had was our consciousness and the zeal to work for an egalitarian society. Needless to say, these are the weapons they fear the most. As for guns and bombs : none have been seized from him. After an illegal arrest they tagged him in a case that dates back 5 years! The ridiculousness of the charges is limitless.

In November 2018, Tipu Sultan was arrested along with three others by the WB  police from Jangalmahal. The police had claimed they were Maoists operatives and the police recovered “Maoist leaflets” from their possession. All four were charged under sections 149 (unlawful assembly), 120 (concealing design to commit offence), 121 (waging, or attempting to wage war), 122 (collecting arms with intention of waging war), 124A (sedition) of the Indian Penal Code. But, Tipu was released in 2019, as the police couldn’t produce even a chargesheet against him in court. The police at that time did not inform the court that there was any case pending against Tipu and there was no mention of the 2016 UAPA case. Even when bail was granted to Tipu, the police did not ask for remand or custody for the 2016 case. In 2016, Belpahari police had arrested a man named Jairam Murmu with a weapon and a poster bearing the Maoist party name. A case was filed against him under the UAPA. But there was no investigation into the incident from 2016 to 2021. Jairam was released within a year and now he is doing a job.  Tipu’s name has been tagged into that dormant case and he has been arrested now.

Ironically, those who had signed a memorandum against the UAPA a few days ago, had themselves re-introduced the UAPA in the state against the mass movement activists. On July 6, 2021, Mamata Banerjee, was a signatory to a letter sent by the major opposition party leaders to the President of India, expressing their ‘grief and outrage’ at the death of Father Stan Swamy in custody, arrested on ‘trumped up charges under the draconian UAPA’. The opposition leaders wrote:

“It is now incumbent that all those jailed in the Bhima Koregaon case and other detenues under politically motivated cases, including draconian laws like UAPA, Sedition Act etc. be released forthright.”

More worrying is the fact that Mamata Banerjee’s government has now, in a midnight raid, arrested an ex-student activist in a five year old case under the same draconian UAPA. The manner of the arrest of Tipu and slapping of UAPA shows the Mamata Banerjee government is no different from BJP when it comes to dealing with political opponents and dissidents in her state. 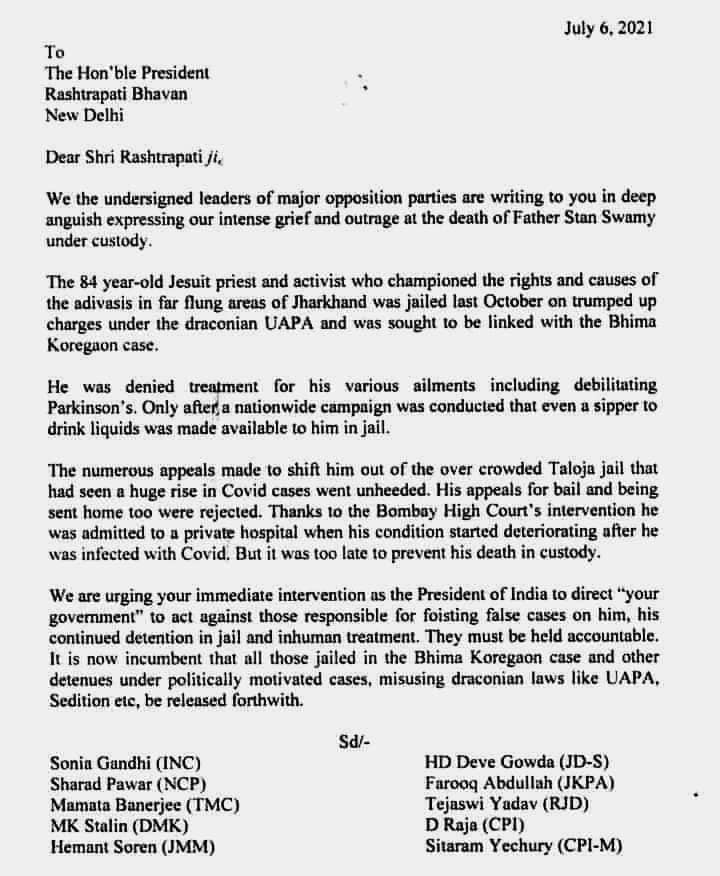 Letter by opposition party leaders to the President against UAPA

Many social, political and human right activists also accuse the TMC government of  targeting mass movement activists like Tipu to silence the voice of dissent. While the TMC supremo demands the release of political prisoners, accused of having Maoists links, by the BJP government, she in her own state is doing the same thing. They say that this kind of arrest will become more frequent if we do not protest against the dictatorial Trinamool government just as we have relentlessly opposed the totalitarian Hindutva fascist forces. Though, Mamata is not alone in playing such a game of political hypocrisy, even in the CPIM ruled Kerala, UAPA and Sedition laws are used to silence dissidents.

Meanwhile, a team from APDR, today, went to meet the SP of Jhargram to know about the reasons for arresting Tipu now, in a five year old case. The SP declined to meet them. APDR members then submitted a memorandum to his department, protesting Tipu’s arrest and arguing the police to not indulge in any form of physical and mental torture of Tipu while he is in their custody. 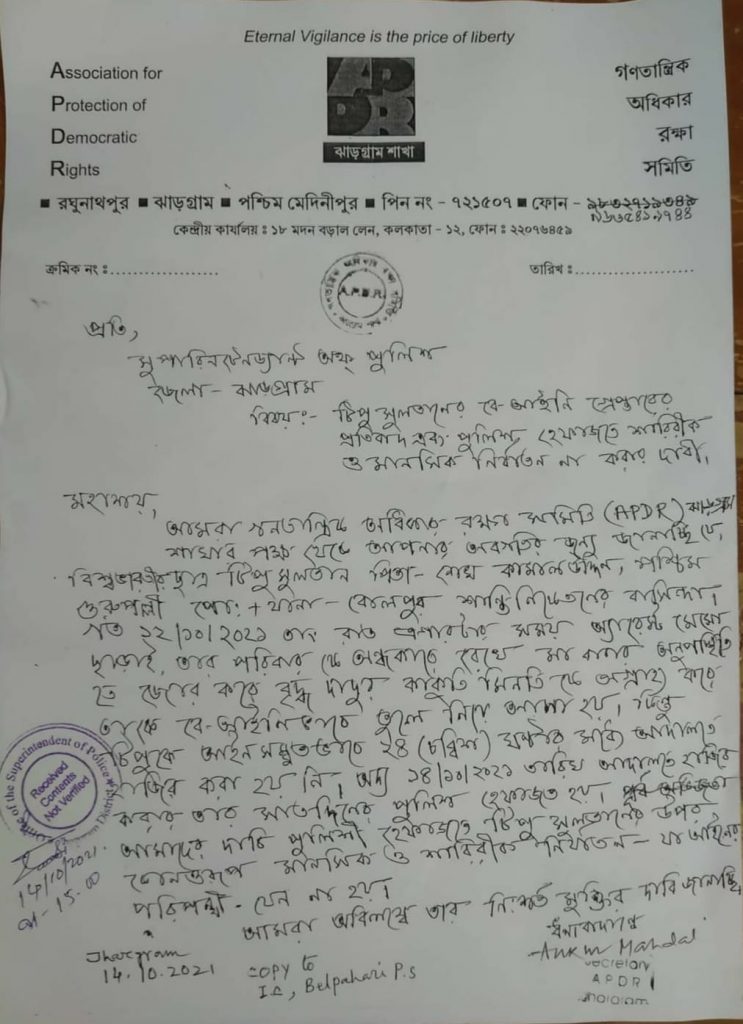