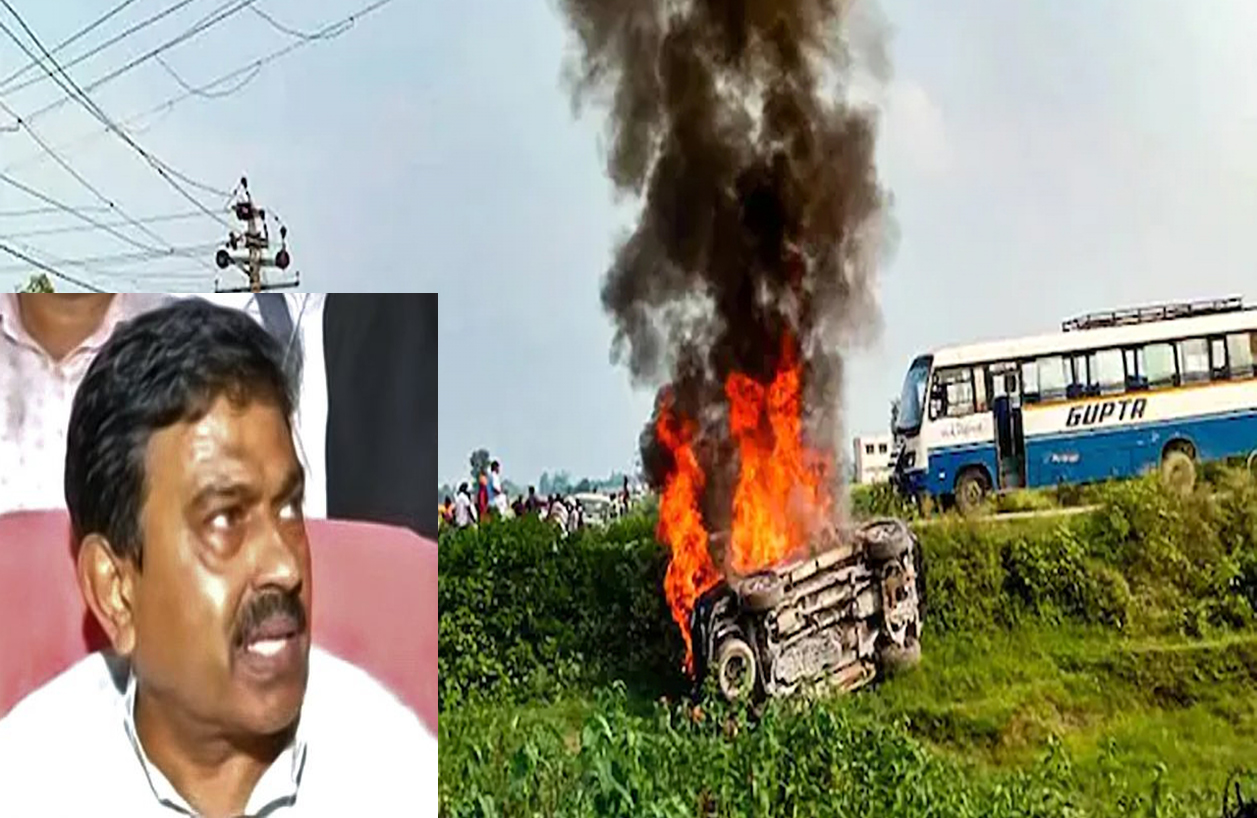 SKM : Shameful that Ajay Mishra has not been sacked yet

Samyukta Kisan Morcha (SKM) expresses its dismay and disappointment at Ajay Mishra Teni continuing in the Union Council of Ministers even now and at not being arrested – His role in the Lakhimpur Kheri Farmers Massacre is clear and PM Narendra Modi’s lack of action so far is shameful, says SKM – The fact that BJP and Modi Government are still defending Ajay Mishra Teni vindicates our stand that communal politics and violence are being brought in to try to weaken and dissipate the farmers’ movement.

October 12th (tomorrow) will be marked as Shaheed Kisan Diwas all over India tomorrow, on SKM’s call. Tomorrow, the antim ardaas of the martyrs of Lakhimpur Kheri massacre will take place in Tikunia, at Sahebjada Inter College. Preparations are being made for the same and tens of thousands of farmers are expected to join this prayer meeting. SKM appeals to farmers organisations and other progressive groups across the country to mark the Shaheed Kisan Diwas by organising prayer and homage meetings all over the country; in the evening, candle light vigils will be held, as per SKM’s call. SKM urges people to light 5 candles outside their homes at 8 pm tomorrow.

Samyukt Kisan Morcha states that it is shameful on the part of the Modi Government that Ajay Mishra Teni has not been sacked yet. While due to the Lakhimpur Kheri incidents his earlier history of criminal cases has come into the public gaze, it is clear that in the Lakhimpur Kheri massacre itself, he had a role to play. It was his vehicles that were in the convoy that killed innocent people. The fact that Ajay Mishra Teni had sought to promote enmity, hatred and disharmony is clear from his speech on September 25th against minority Sikhs of Terai region. His speech was of intimidation and threat, in a public meeting at that, where he was also proudly alluding to his criminal antecedents, and on the basis of this, stern action should have taken place by now, which could have prevented the entire episode of Lakhimpur Kheri massacre. The fact that he tried his best to protect his son Ashish Mishra from being arrested is also very apparent. It is clear that his continuation as a Minister in the Union Council of Ministers can be construed only as Narendra Modi’s harbouring of criminals, Narendra Modi’s readiness to erode further the credibility of India’s Union Government, or Narendra Modi’s ego becoming more important than morality in public life. It is for such ego reasons that this farmers’ agitation is having to continue with its protests eleven long months after lakhs of farmers first reached Delhi’s borders last year.

Samyukt Kisan Morcha has already issued an ultimatum about 11th being the deadline for the sacking and arrest of Ajay Mishra Teni. Tomorrow, in the prayer meetings organised in Lakhimpur Kheri for the martyrs of the massacre, SKM will go ahead with its announced plan of action. SKM reiterates that the farmers’ movement cannot be dissipated or weakened by BJP-RSS playing their communal card, and that farmers of the country are united in their struggle.

Ashish Mishra Teni has been sent to a 3-day police remand while the UP SIT sought his custody for 14 days, after a hearing in the Sessions Court in Lakhimpur Kheri today. It is quite shocking and concerning that the Uttar Pradesh police has also allowed his accomplices to flee. Ashish Mishra also tried to cover up and create his defence before being questioned by the Police, by coming with affidavits and pen drives. From the way the investigation and police action around arrests have unfolded so far, it is apparent that justice is quite far away, left to UP Police and administration. SKM warns UP government against fudging of any evidence, and once again asks that the investigation mechanism in this case should report directly to the Supreme Court.

While a Punjab BJP leader is reported to have questioned SKM’s protest actions on Hindu festivals, SKM would like to remind BJP that Dussehra is a festival of truth and goodness triumphing over evil. The action call given by SKM will reflect this very spirit of Dussehra, and SKM has no intention to come in the way of other festivities of the day. The farmers’ movement in fact has embraced the values in all religions and had built unity and bonding amongst farmers across faiths. The actions of SKM are against the government and BJP. Farmers in the movement will mark Dussehra and will also join the effigy-burning of BJP leaders on October 15th. SKM has already announced that the actions after October 12th are in case Ajay Mishra Teni is not arrested and sacked, and it is now the responsibility of the BJP governments to ensure that justice prevails.

The ruling MVA has announced a state-wide bandh today in Maharashtra, to condemn the killings of farmers in Lakhimpur Kheri. SKM also has reports of the Bandh having been successful.

Uttar Pradesh Police is laying siege on movement of several farmers and farmer leaders, to prevent them from proceeding to Lakhimpur Kheri. Reports have come in of several AIKMS leaders being illegally detained in Bara in Prayagraj. Reports indicate that Uttar Pradesh government is deploying police and paramilitary forces in anticipation of the farmers’ protests as per SKM’s call of action. It is indeed regrettable that instead of assuring actions that will restore justice and thereby prevent intensification of protests, UP Government is preparing for protests that will follow lack of correct action, in its attempt to protect culprits associated with BJP.

Lakhimpur Kheri Farmers’ Massacre is embarassing and making uncomfortable BJP leaders themselves, even though no stern action is being taken by the party. This is apparent from the statements of BJP MP Varun Gandhi who understood that this incident should be seen as one that seeks to create communal divide, and that of the UP state BJP President’s statements.

Farmers are continuing with their protests against BJP leaders and events in various places. In Jind, there was a protest against a BJP workshop yesterday, accompanied by a peaceful jam of the Jind-Panipat highway. It is reported that BJP leaders and a few BJP MLAs had to be sneaked away through a backdoor from this event. In Ellenabad of Haryana, BJP-JJP candidate Govind Kanda faced farmers’ wrath. Meanwhile in Chandigarh, it is reported that farmers who were protesting against BJP leaders were detained and beaten up by Police.

Today is the 119th Birth Anniversary of Bharat Ratna Lok Nayak Jayaprakash Narayan, the Independent Movement activist, socialist and political leader credited with a call for Sampoorna Kranti in the context of Indira Gandhi-imposed Emergency. Samyukt Kisan Morcha pays its deep respects to the Lok Nayak on this occasion.

Farmers in Haryana’s Gohana have warned state Chief Minister Manohar Lal Khattar from participating in an event in Gohana on 13th October, and stated that they would stage a black flag protest if the CM joins the program.