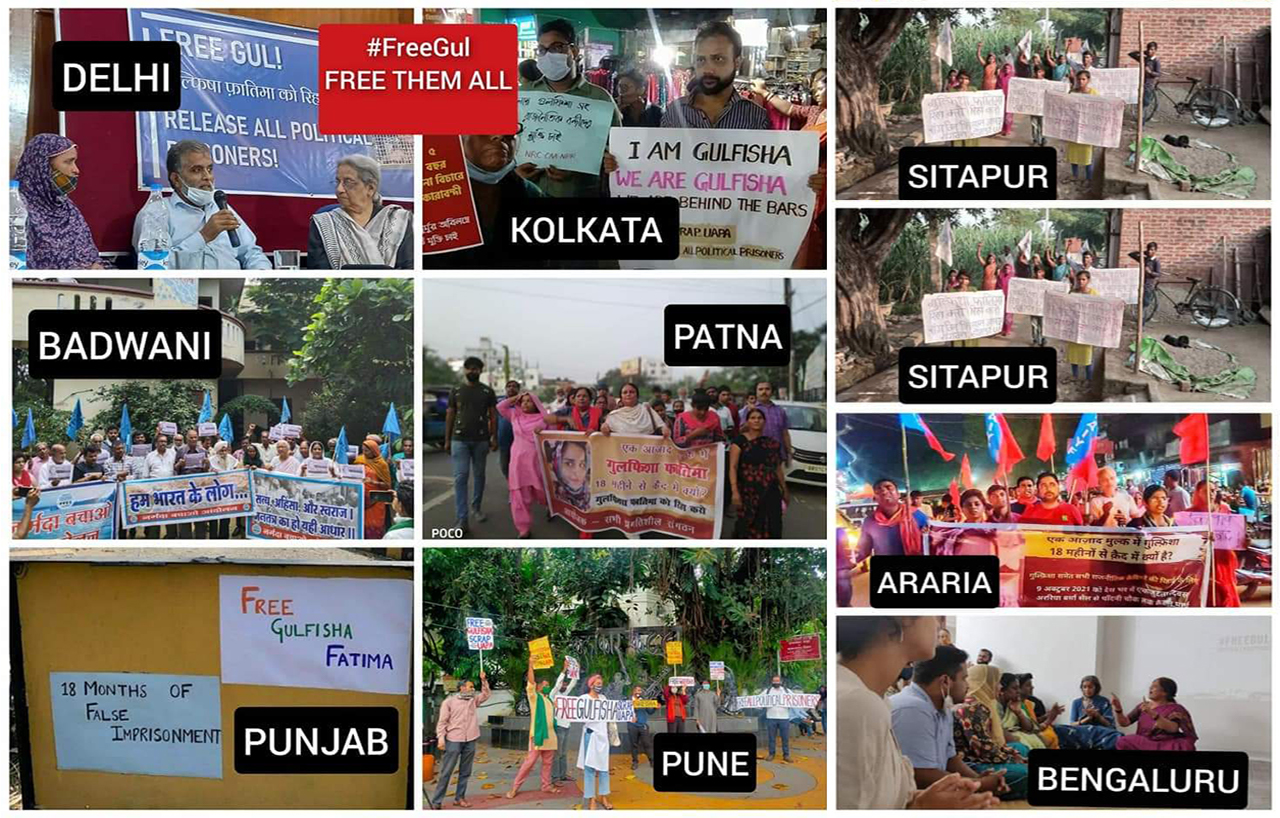 On 9th October ’21, Gulfisha Fatima completes 18 months of unjust incarceration after being framed as a ‘terrorist’ and falsely accused of supposedly conspiring and orchestrating the Delhi ‘Riots’ 2020.  An Urdu Masters student of Delhi university, an MBA graduate, a radio jockey — Gul who belongs to Seelampur area of North East Delhi, was a part of the peaceful and vibrant anti CAA-NPR-NRC movement.

Currently, Gulfisha stands accused in four FIRs, charged under the anti-terror law UAPA and various serious sections of the IPC such as 302, 307, Arms Act etc. Gulfisha has secured bail in all other cases, but she continues to remain in jail in FIR 59/20 which invokes the UAPA – a law infamous for subverting the most basic constitutional and legal rights.

What we witnessed in Delhi at the end of February 2020 was an organised attack by Hindutva forces against the Muslim community and the peaceful Muslim women-led protest sites in North East Delhi. Gulfisha’s ‘crime’ is the fact that she is a young Muslim woman student who raised sharp and pertinent questions to the current regime in a struggle for safeguarding the fundamental values and ethos of our constitution. Gulfisha’s imprisonment is not an exception, it is a part of a frightening pattern of repression of all democratic and dissenting voices by the current government. In the same case as hers many like Ishrat Jahan, Tasleem Ahmad, Meeran Haider, Shadab Ahmed, Athar Khan, Umar Khalid, Sharjeel Imam, Salim Mallick, Salim Khan, Khalid Saifi, Tahir Hussain and Shifa-ul-Rahman continue to languish in jail.

In a press conference that was held in Delhi, the speakers took this opportunity to not only speak about her but all the other falsely accused imprisoned persons as well. Because there can’t be justice for one, there has to be justice for all.

Addressing the press conference, Nabiya Khan, an activist and poet said, “Her imprisonment is an organised attack on Muslims and women. State wants to keep Muslim women in check, Muslim women need saving that is the state narrative, Shaheen Bagh has strongly upturned that narrative. Caa-Npr-Nrc was not just a fight against a law, but to create an equal citizen for Muslims, for Muslim women”.

Apeksha Priyadarshini of BASO said, “our faith in the state and even the judiciary has been weakened. The whole role of the Delhi Police still remains uninvestigated. Those arrested under UAPA are overwhelmingly Muslim, Dalit or Adivasi. If we want real democracy, then the fight for equal citizenship cannot be criminalised.”

Kavita Krishnan spoke about how the Delhi HC judgement clearly asks pertinent questions like why put UAPA and other terror charges on protests? Citing the additional Sessions Judge Vinod Yadav who gave honest verdicts in almost 12 cases, she mentioned how he emphasised on the accountability of the police. As a result, he has now been transferred. People who fight for democratic rights are inside prison, those who threaten and kill openly are roaming free outside.

Nargis Saifi, wife of Khalid Saifi, spoke about how Khalid Saifi was brutally tortured in custody, his limbs and legs were broken, he had to be brought in on a wheelchair. He was the first to be arrested; and when he was almost about to get bail in that case, he was rearrested in FIR 59/20. She said, “The only crime of my husband is that he stood for the rights of the oppressed.” She added, “Those who tried to stop the riots are the ones framed for the riots, his last post on FB was about arranging ambulances for those hurt in the riots.” Nargis stated “We have to stand up for one another, we have to raise our voices for everyone, we must stop this repression, we should demand that UAPA is repealed and no-one has to face what my husband and our family is facing.”

Arfa Khanum, a journalist, said, “I have come here today for Gul because Gul fought for me. I was a witness to the Delhi violence, I am not an activist but an active journalist, who hears the jameer ki awaaz. I want to share my experiences of the anti caa/nrc movement, why gulfisha is so important for us, why is gulfisha so threatening for the state? Without freedom of expression dies, democracy dies. Today when we gather here, we gather to continue this struggle for democracy. When the state dehumanises them by sending them to jail, our responsibility is to humanise them.. She is paying the cost by her freedom being snatched away, while she is in the process protecting our freedom, our democracy. We are all indebted to Gulfisha.”

Gulfisha’s father spoke about how the shock and trauma of her imprisonment has affected him mentally, emotionally and physically. He said he feels he won’t live long, unless they release Gul. He really hopes that the day will come soon.  Noor Jahan, Athar Khan’s mother, said, “The movement came to a halt because of the pandemic; but once it ends, I will resume this political struggle. There are so many people that we didn’t know like Umar Khalid, Khalid Saifi and others, but today we all stand in solidarity with each other. This is very important.”

The speakers and the organisers reaffirmed that they will continue to resist the fascist islamophobic and castiest forces to preserve the democratic spirit of our constitution, and demanded :