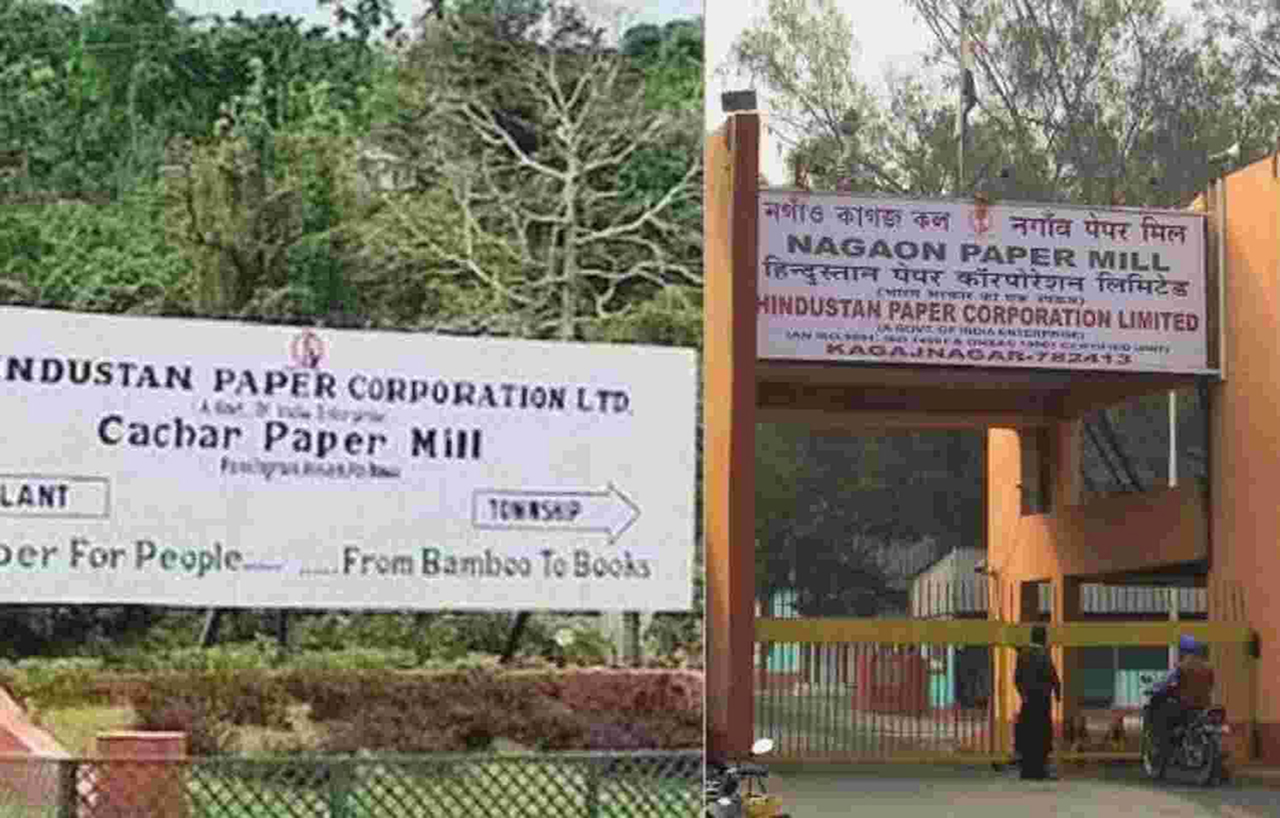 Despite tall promises, before every election by the Prime Minister, union Home Minister and the state Chief Minister, to revive the now-defunct two paper mills in Assam, about thousand employees with unpaid wages and other dues, have recently been served with eviction notice by the liquidator. A Groundxero report.

Over 900 employees of two central government owned now-defunct paper mills — Nagaon Paper Mills and Cachar Paper Mills in Assam — have been slapped with eviction notice, asking them to vacate their living quarters within 15 days from September 3, to facilitate the sale of the paper mill’s physical assets. Both the mills are owned by the Central government-controlled Hindustan Paper Corporation Limited (HPCL) and were closed without notice due to a shortage of working capital.

Mr Kuldeep Verma, the liquidator, appointed by Hindustan Paper Corporation Limited (HPCL), which owns the two paper mills, has stated in the notice that to facilitate the sale of the paper mills, as scrap, through liquidation and to realise maximum value, it is necessary for the liquidator to get vacant possession of the buildings on mill-land. The notice issued to all employees, who are residing in mill quarters, stated that the employees need to  “vacate the accommodation or quarters occupied by them within 15 days by handing vacant, physical and peaceful possession to the liquidator through authorised representatives posted for the purpose, failing which legal action will be taken for getting back vacant possession of the accommodation/quarters”.

President of Joint Action Committee of Recognised Unions (JACRU) of both Nagaon and Cachar Mills, Manabendra Chakraborty, said the quarters will be vacated “over the dead bodies of the employees”. “The employees have not been paid their dues for the last 56 months, 93 people have died so far due to lack of proper treatment, including four who died by suicide. Now they are being asked to vacate the quarters which is not only illegal but also a grave human rights violation,” he said.

Cachar Paper Mill at Panchgram in Hailakandi district and Nagaon Paper Mill at Jagiroad in Morigaon district have been non-operational (without notice) since 20 October 2015, and 13 March 2017, respectively. In the two paper mills, there were around 3,600 employees, 24,000 contractual workers and thousands of suppliers and contractors.  Nearly 1,000 former employees still live in the quarters, most at the Nagaon mill. The notice of eviction has been served individually to all the occupants, and has also been sent to all employees’ associations and workers’ unions of the defunct paper mills.

In the last four years, since the closure of the paper mills, the employees have suffered immensely — they have not been paid their monetary dues (which include pensions, salaries, provident funds, etc..) for the past 56 months, 93 of them lost their lives during the period allegedly due to lack of proper medical treatment and 4 have committed suicide. Dharani Saikia, a 61-year-old employee who was suffering from diabetes, hypertension and heart-related ailments, died following a massive cardiac arrest at Jagiroad in Morigaon district on 24 July 2021. On August 29, Akshay Kumar Mazumdar, a 62-year-old employee, died. He was suffering from hypertension. His family members alleged that they could not afford proper treatment as they had run out of money. JACRU claimed that this was the eighth death of an employee of the closed mills, since the second BJP government, led by Chief Minister Himanta Biswa Sarma, took office. Eighty-five other employees had died earlier, either due to starvation or lack of medical treatment during the tenure of his predecessor Sarbananda Sonowal. The total outstanding monetary dues of the mills’ employees, until December of 2019 was over Rs 620 crore. And now the surviving employees have been served notice to vacate even their living quarters within 15 days!

It can be seen from the above table that even after the Modi government came to power in 2014, the production in the two  paper mills was not significantly lower  from the target production of 100,000 tons per annum. But after the government came to power, production declined sharply and was then completely stopped. If the corruption by a section of the mill workers was the reason for stopping production, as was alleged by the management, then one wonders what stopped both the state and the central government from taking actions to stop the corruption?

Actually, from 2008-09, the production in both Cachar and Naogaon began to decline. That is mainly because the supply of raw material, i.e., bamboo, which also happens to be the main ingredient in the production, suddenly started to fall. Both Cachar and Naogaon paper mills are mainly dependent on bamboo from Mizoram. The government and the management took no steps to address the problem. Initially, to overcome the problem, the mills took to importing raw paper- pulp but that led to massive increase in cost of production. Within few years, the financial health of the two profitable paper mills, deteriorated to such an extent that HPCL couldn’t pay even a meagre amount of Rs 98 lakhs which it owed to Alloys and Metals (India) and all operations in the mills were suspended without notice over a lack of working capital, leaving the 1,200 plus employees of the defunct mills in a precarious situation.

On 13 May 2018, the National Company Law Tribunal (NCLT) – in response to a petition by Alloys and Metals (India), which owed Rs 98 lakh to HPCL — directed initiation of the CIR process against HPCL under the Insolvency and Bankruptcy Code (IBC), 2016. The NCLT suspended the board of directors of HPCL and a resolution professional (RP) and a committee of creditors were put in place. Though the chairman and managing director of HPCL filed an appeal in the National Company Law Appellate Tribunal (NCLAT), it was dismissed on January 8, 2019, and on May 2, 2019, NCLT ordered for the liquidation of the two paper mills. In its order, the NCLT said the RP didn’t submit a resolution plan to it within the mandatory 270 days. After the time limit had lapsed, the NCLT felt that the application of the creditor “merits consideration”.  Finally, after several rounds of meetings between all stakeholders and a number of hearings, the NCLT, on April 26, 2021, asked the liquidator to sell all the assets of the two paper mills.

Following the order of NCLT, the liquidator Kuldeep Verma, on June 1, issued advertisements seeking bids for the e-auction of the mills at a reserve price of Rs 1,139 crore. The auction announcement came as a rude shock to the mills’ 1,200 plus employees, who were already worried over non-payment of their monetary dues ever since the suspension of operation, and were also agitating so that the two mills do not go bankrupt. Manabendra Chakraborty, JACRU president, told The Wire that the e-auction notice as issued in the newspaper is against the National Company Law Appellate Tribunal (NCLAT) order of May 29, 2019.

Following an appeal made by the workers’ union before the tribunal, in a modified order, the NCLAT included the Union goverment as ‘party’ in its appeal made before the court and directed the Centre to initiate immediate necessary action to ensure HPCL Paper Mills as a ‘going concern’, and release all pending salaries and statutory dues of the workers. The liquidator was asked to approach the government for the realisation of funds for this purpose. 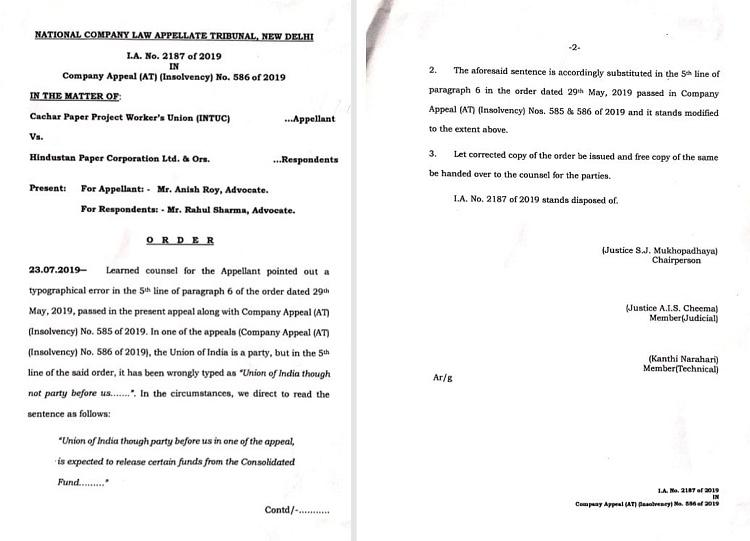 This modified order was significant in the sense that the Central government which has been repeatedly attempting to suppress or washing away their responsibilities and resorting to excuses was made ‘party’ and could no longer skip its responsibility in the matter. In this context, the decision by the liquidator, first to issue liquidation notice of the mills, and now to send eviction notice to the employees, without consulting the central and state government, seems not only whimsical, but also illegal.

But, as there were no bidders for the e-auction, till the last date of submission on June 15, the auction was suspended. Subsequently, on June 22, a new auction notice for the sale of the two mills was issued by the liquidator, this time, at a reserve price of Rs 969 crore, which was Rs 170 crore lower than the previous price.

It is clear that no private player is interested in reviving and running the defunct paper mills. All that they are eyeing for is the huge chunk of prime land owned by the paper mills. The latest move of issuing eviction notice by the liquidator seems to be aimed at luring prospective bidders by offering them vacant  land by removing the employees from the quarters on the over 2,000 acres of total land owned by the mills as part of their assets.

The employees and people of the area felt betrayed by the BJP, which had promised to revive the two paper mills since Sarbananda Sonowal became the chief minister of Assam in 2016. They feel particularly let down by the party as Prime Minister Narendra Modi himself, in the run-up to the last assembly elections (2016), had said he would ensure the revival of both the mills while speaking at a rally held at Kalinagar area of Cachar on March 26, 2016. The promise, however, was not kept. Even during election campaigning in this year’s assembly polls, the party had assured people that steps will be taken to revive the mills. Amit Shah, the Union Home Minister, in one of his election campaign speeches at Sorbhog in Barpeta district on April 4, 2021, assured the people that the BJP-led government will not only revive the two paper mills but take steps to augment paper production. Amit Shah had said, “bamboo production in Assam will be enhanced and the defunct paper mills will be reopened by the BJP government”.

On September 6, JACRU and members of the Cachar Paper Project Workers’ Union reached Guwahati to meet chief minister Himanta Biswa Sarma. The union bodies have already filed objections to the deputy commissioners of Morigaon and Hailakandi districts and spoken to Kuldeep Verma, the HPCL liquidator. According to the latest report, in a tripartite meeting held at Dispur between the Assam government, the mill officials and the workers unions, the state government has proposed a package of Rs 570 crore to meet the monetary dues of the employees. The unions have accepted the package, though JACRU President said the amount will meet the due wages of the employees for only 28 months. The state government has also promised to come out with a detailed plan including those regarding re-employment of the former employees.

With the Narendra Modi government’s policy thrust to disinvest and monetise public enterprises, the revival of the two paper mills is certainly not going to happen. It remains to be seen whether the BJP government, at least, pays the beleaguered employees their dues, before the assets of the mills are sold out.