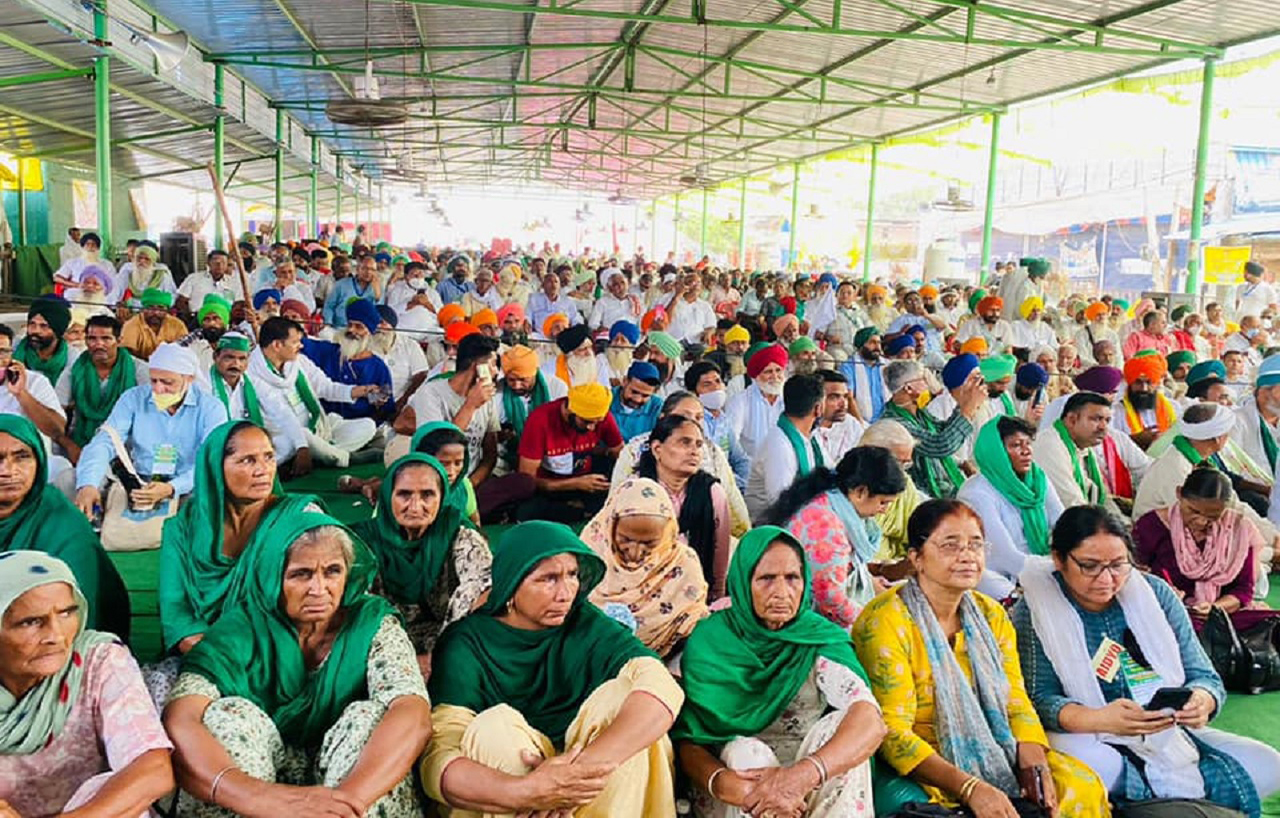 The two-day long All India Convention of Samyukt Kisan Morcha (SKM) at Singhu Border concluded today after unanimously giving a clarion call to expand and intensify its agitation to every village and corner of the country and gave a call for a one day Bharat Bandh on 25 September, 2021. It also called upon the farmers to make full efforts to make the SKM rally at Muzaffarnagar in Uttar Pradesh on 5th September, a massive show of strength.

The Samyukt Kisan Morcha, a platform of protesting farmer unions, today, gave a call for a one day Bharat Bandh on September 25, one year after Parliament passed the three contentious farm laws. The announcement was made after the conclusion of a two-day All-India Convention at Singhu Border, one of the protest sites on Delhi borders, where the farmers have been camping for the past nine months, demanding repeal of these pro-corporate farm laws. The laws were passed by Parliament last September. Protesting farm unions had then also issued a strike call on September 25, 2020, just two days before the President signed the three Bills into law. 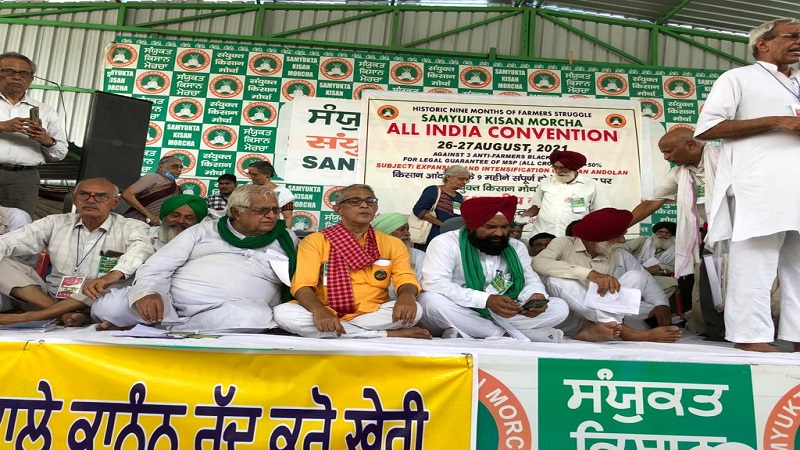 Dr. Ashish Mittal, the Convenor of the Organizing Committee of the convention, at a press conference on Friday said that the successful conclusion of the two-day all-India convention at Singhu border, shattered the myth and lie being propagated by the government and its paid-media, that the farmers protests are limited to only a few states in North India. Dr. Mittal informed that more than 3000 delegates from 22 states representing more than 300 farmer & agricultural workers’ unions & associations, 18 all India trade unions, 9 women’s organisations and 17 student & youth organisations participated in the historic convention. To widen the national character of the protests, and as part of its ‘Mission UP’ plan to take on the BJP government in the state led by Yogi Adityanath, during the upcoming assembly elections, SKM announced its decision to hold a massive mass rally at Muzaffarnagar in Uttar Pradesh on September 5. “The historic mahapanchayat will take decisions with regard to the coming U.P. elections,” said All India Kisan Sabha leader Atul Kumar Anjan.

Earlier, on 26 August, the Convention was inaugurated by farmer leader Rakesh Tikait who welcomed all the delegates and reaffirmed the resolve of the farmers to continue the peaceful protest till all their demands are met. This was followed by a condolence resolution paying homage to the martyrs of the farmers’ movement. Dr. Ashish Mittal, convenor of the Organising Committee of the Convention placed the draft resolutions before the delegates which called upon the people to intensify and expand the ongoing struggle across the country so that Modi Government is compelled to repeal the 3 anti-farm laws and give a legal guarantee of MSP.

The Convention focused on expansion as well as intensification of the Kisan Andolan. 90 speakers representing various farmers, agriculture workers, trade unions, women, students, youth organisations across the country addressed the 2000 odd delegates over the two days and reiterated the farmers demand for complete repeal of the 3 Farm Laws, to ensure legal guarantee of purchase of all agriculture produce at MSP of C2+50%, for repeal the new Electricity (Amendment) Bill 2020 and to stop prosecution of farmers in the name of air quality control in National Capital Region (NCR).

The Convention had sessions relating to 3 farm laws, intensive discussion on issues relating to industrial and agricultural workers, rural poor and tribal issues. Leaders of many trade unions of the country addressed the Convention regarding the undemocratic and anti-people labor codes that are being imposed on the workers and the related problems.

The Convention concluded that all proposals of changes to ‘solve’ the issue, advanced by the Union Government, provide no relief to the farmers’ apprehension of Corporate takeover of agriculture, loss of their land and livelihood and damage to the environment, ecology and biodiversity of the country. All the speakers emphasised on intensifying and expanding the various ongoing struggles involving farmers, workers, agricultural workers, adivasis and common people, thus widening the scope of kisan andolan, so that it becomes a pan-India movement. The speakers exhorted the farmers to continue their peaceful protests despite all provocations by the RSS-BJP, baseless and fake charges labelled by the government and false implication of leaders and activists under draconian laws. They observed that this nine month long struggle has done a monumental job in uniting people across religions, castes and regions and has inspired confidence and participation of the most oppressed sections in building a self-reliant India, sans Corporate loot.

The convention also condemned the communal attacks on minorities and vehemently opposed the Modi government’s plan to sell off the country’s natural resources and public sector enterprises to the Corporates and MNCs. Resolutions on these and related subjects were approved at the convention.

Summing up the views expressed in the Convention, the convenor of the Organizing Committee, Dr. Ashish Mital said it is quite obvious that today the entire farming community is forced to fight a government facilitating Corporate and MNC control over all aspects of agriculture, food storage and marketing. The changes being instituted will lead to widespread increase in farmer debts, suicides and displacement from land. He added that the attack is not limited to farmers and agriculture labourers. It is an all round attack on all sections of India’s working people. The country’s assets, meant to ensure the growth of the country, to provide employment and security to its people, like Railways, Power Transmission lines, Natural gas resources, Telecom projects, food storage, Insurance, Banks are being sold. There is an attack on the basic rights of industrial workers through the 4 labour codes. In the name of growth of economy, each and every aspect of human life is being monetized to help profit growth of the Corporate, under the garb of Hindutva, which serves to numb the consciousness of people, and by terrorizing the common people through fascist attacks on their freedom.

The Convention called upon farmers to form state/ district SKM units and build struggles in states and districts along with all supporting organizations, hold conventions, rallies, oppose toll extractions and protest against BJP and NDA leaders for refusing to accept the patriotic demands of the farmers of India.

The Convention observed that while farmers had built a massive, democratic and peaceful movement to make the govt see reason, in its blind commitment to serve the interests of Corporate profits, the Govt had stubbornly refused to relent. It stressed on the need to intensify and widen the protests all over the country.

This report is based on a press release issued by the Steering committee, Samyukt Kisan Morcha.