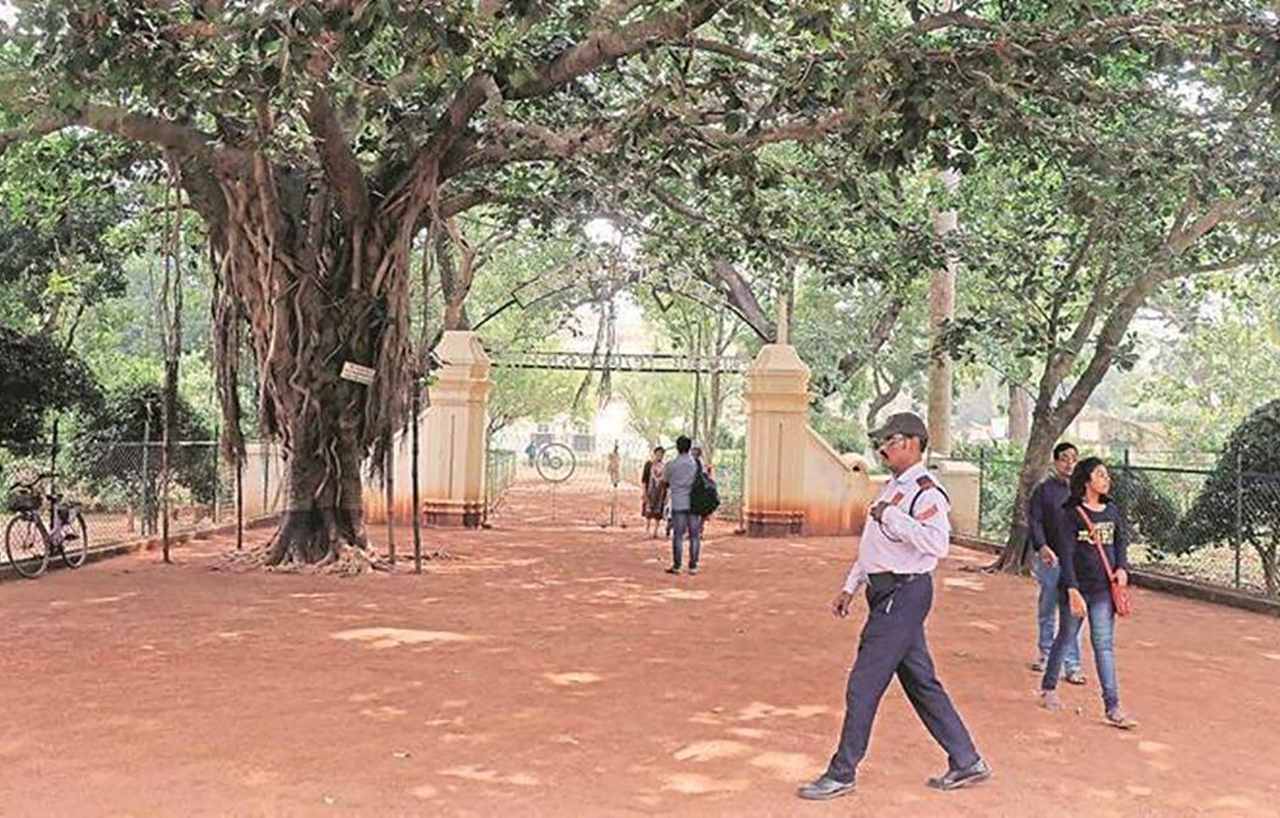 The Visva-Bharati University administration on Monday rusticated three students — Somenath Sow, Falguni Pan of the economics department, and Rupa Chakraborty of Hindustani classical music — for three years, for the alleged acts of ‘gross indiscipline and misconduct’. The decision was taken following a report by an enquiry committee, set up to look into the role of the three students during a student protest inside the campus on Jan 9, 2021. The protest was organized to rally against  vice-chancellor Bidyut Chakrabarty’s various moves, including that of suspending the economics professor Sudipta Bhattacharya, who had raised an issue of alleged malpractice in one recruitment.

The three students were already under suspension for the past nine months since January14. Varsity authorities had accused them of  “forcibly” breaking a lock at the faculty chamber of the economics department, during the protest against the suspension of economics professor and varsity teachers’ body president, Sudipta Bhattacharyya.

The administration had then set up an inquiry committee to investigate the allegations against the three students, which had recently submitted its report.  The report, signed by its five members, professors Sarbajit Sengupta, a former Principal, Vidya Bhavana, Swapan Kumar Ghosh, the current principal of Sangit Bhavana, retired professor Asha Mukherjee, Mahua Banerjee of Palli Siksha Bhavana, and one external member Salil Bhattacharjee, a former deputy superintendent of West Bengal police, claimed that all the witnesses had identified the three and had “unequivocally confirmed” that they had taken “lead roles in the incident of utter chaos and vandalism, taking over the law in their hands.”  As per the findings of the inquiry committee:

“After careful consideration of the depositions made by the students Somenath Sow, Falguni Pan, and Ms. Rupa Chakrabortty and the other eleven witnesses it has been revealed that the three above mentioned students gathered on 09-01-2021 morning at Chhatimtala with definite ill-motive to create disturbance and vitiate the calm ambiance of Visva-Bharati. It was also their intention to besmirch the university’s administrative decisions and universal high reputation of the University.”

In a letter sent to the three rusticated students on Monday, the Varsity’s Proctor stated,

“It has been found from the report submitted by the Enquiry Committee constituted by the University vide Office Order No. REG/ORDER/156/446 dated 06.02.2021 on the matter of your alleged act of gross indiscipline and misconduct in the Department of Economics & Politics, Visva-Bharati on 09.01.2021, that the charges leveled against you were established. In consideration of the said inquiry report, the competent authority of the University proposes to impose upon you the punishment of rustication of your studentship in Visva-Bharati for 3 (three) years.”

The students have been told that they may submit their representation, if any, in writing, to the proctor by August 27 August “for consideration of the competent authority, failing which the proposed punishment will be deemed to be confirmed.”

Besides these three students, two professors, Arani Chakraborty and Pijush Kanti Ghosh of the physics department, who had in February lodged a police complaint against the university authorities, for keeping them ‘detained’ at their office, have also been suspended on the same day.

The Visva-Bharati University, founded by Rabindranath Tagore is undergoing endless turmoil and controversies, since Bidyut Chakrabarty took over as the Vice-Chancellor in 2018. The students, as well as a section of the teachers and staff, have repeatedly accused Chakrabarty of being an ‘RSS stooge’ and carrying out a ‘saffronisation’ drive within the campus with an exemplary high handedness, disregarding the liberal and humanist tradition and culture of the University. The three politically left-leaning rusticated students have become the faces of the protest on the campus against the “wrongdoings” of the vice-chancellor, and his “moves to saffronise the campus”.  They had organised and led protests when the varsity organised a lecture by BJP leader Swapan Dasgupta, in support of the controversial Citizenship Amendment Act (CAA) by the Narendra Modi government. These students had also lodged a police complaint against the VC after he was allegedly found in a video  plotting an attack on students who had gheraoed him and Dasgupta on that day.

We contacted Somnath Sow over the telephone. Reacting to the varsity’s expulsion decision, he said, “We were first suspended on January 14. We have been continuously agitating for three years with various demands of the students. He (the Vice-Chancellor) does not feel the need to listen to any demands, nor does he feel the need to have a conversation with us. On the contrary, the students were beaten by his thugs. He has conspired against us at different times, which has culminated now in our expulsion. We certainly will not accept it silently. We will fight the legal battle”.

Sow further commented, “The setting up of this inquiry committee is putting up a show, all its members are persons of his choice, so that the report can be made as he wishes. He had already threatened us with expulsion, even before the so-called enquiry had begun. I knew from the very  beginning that there would be no impartial investigation, that the whole thing would be fabricated under the direction of the Vice-Chancellor.”

Rupa Chakraborty, on the other hand, sounded devastated after receiving the expulsion notice. She said, “We have been finished. I am not thinking of taking any action at the moment. I just want to quit this place. I’m moving on from here as of now. As far as I am concerned, I saw honesty has no value. Otherwise, how can he (the Vice-Chancellor) give me such an extreme punishment without any proof ? There was a biased hearing by a biased inquiry committee. We had demanded the formation of a new inquiry committee. I find myself completely upset, mentally. You know the suspension has been going on for nine months.  I don’t have the mental capacity to work here anymore. It was my final year. For the time being, I want to take a break from this whole thing.”

Shamim Ahmed, the lawyer of the accused students said, “We will definitely challenge it legally. The report given in the name of Findings of Inquiry Committee is very suspicious. They have sent us only the proposed penalty, not the full inquiry committee report. We have been asked to appear before the enquiry committee only once. We had said that four of the five committee members are biased. But they did not comply with any of our demands. Our letter was not answered. They are saying they called many witnesses. We have the legal right to know their names, to see their submission and cross examine them. We have sent a letter raising these points. We will take the next step based on their reply”.

Meanwhile, this undemocratic, authoritarian and inhuman decision of the university authorities of expelling three students and suspending two teachers is surely going to create more turmoil inside the campus. The student organizations will surely resist this move by the VC and thwart his attempt to weed out dissenting voices and run the university as his personal fiefdom. Left student organizations like SFI and PDSF have called protest meetings in Kolkata against rustication of the three students. 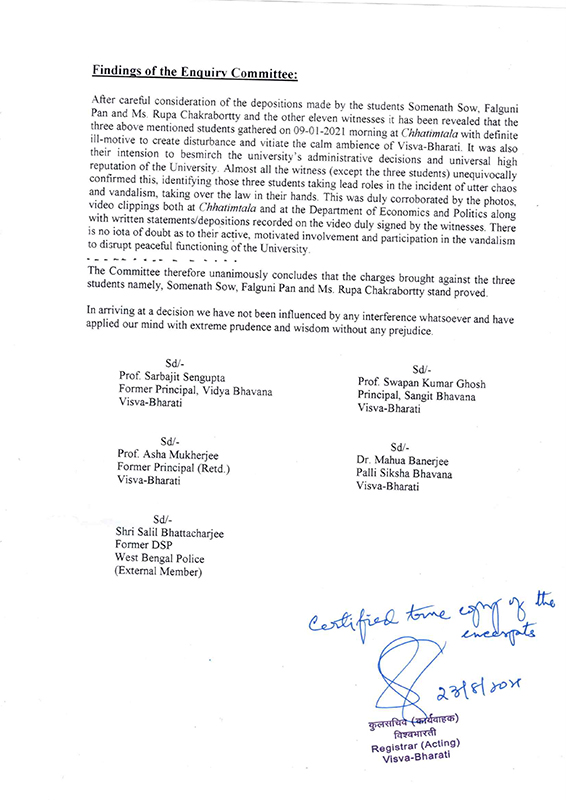 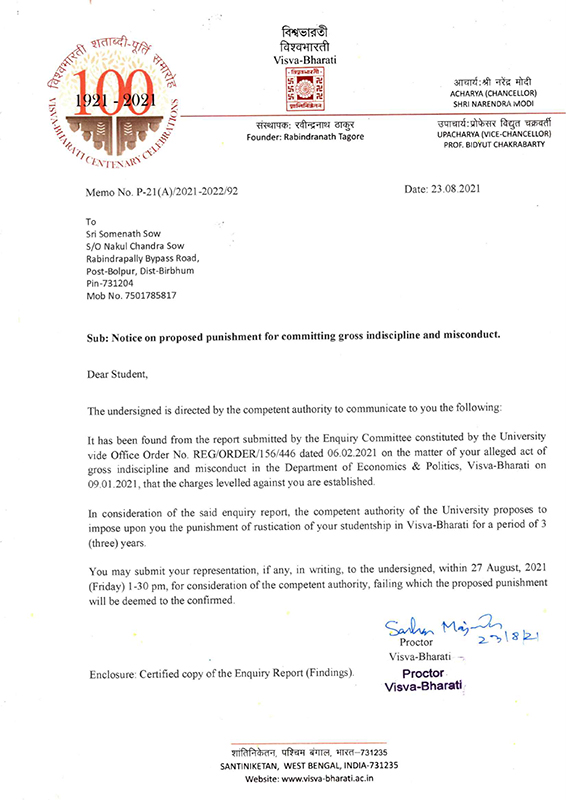