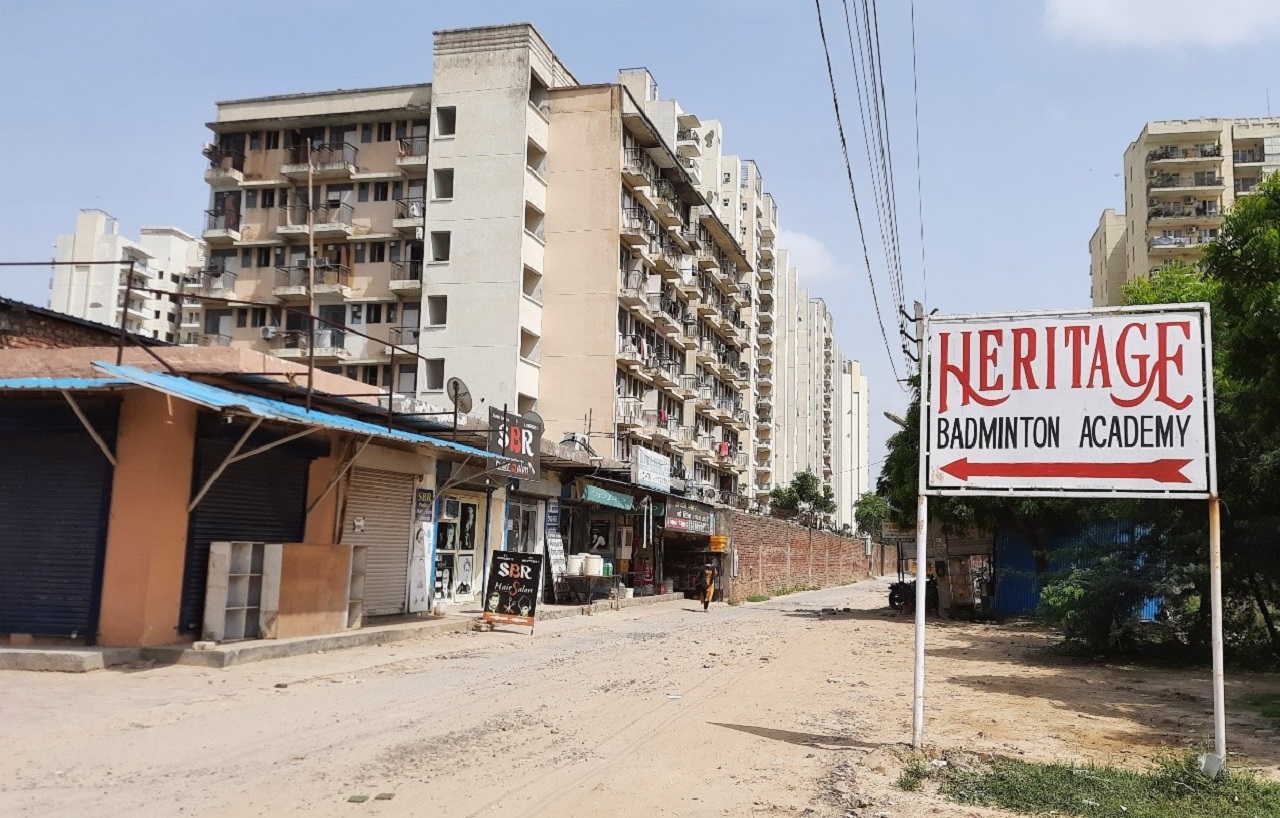 A Lynching in Gurgaon: The many accidents that mark the life of a migrant worker

A migrant worker named Anuj died on August 2, 2021 in Gurgaon when he was brutally assaulted and beaten up inside a badminton academy, in what police termed was a case of ‘mistaken identity’. Migrant Workers Solidarity Network (MWSN) volunteers met with Sanjay, his brother in-law who was also beaten up by the locals. Below is the fact finding report about the incident.

It is difficult to write about a tragedy of this magnitude.

Newspapers have been reporting an aspect of this story since the last ten days. It pertains to the murder of a Dalit migrant worker from UP in Sector 37C in Gurgaon, in what police reports is a case of ‘mistaken identity’. Anuj, Chandan and Sanjay were picked up by local men in a black car, driven into a badminton academy less than 100 metres away, thrashed and locked in a toilet. At this point, Sanjay lost his consciousness. They were brought out and thrashed again. These gruelling three hours for the workers ended with Anuj’s death in the premises of the academy.

The locals who assaulted them fled from there and have been arrested in the days after. They had narrowed down on these workers when a female student training in their academy was allegedly stalked and harassed by men in a nearby area, who then called her coach in distress. In what can be called a tragic alignment in time, Anuj and Sanjay happen to walk into Sector 37 to meet a contractor, Chandan who had promised them jobs in a nearby housing society in housekeeping services. It was while they were waiting for Chandan that Anuj and Sanjay were picked up by these local men who run the badminton academy.

Once in the academy, when they kept pleading that they were waiting for a contractor, and had shown their ID’s, the local men dragged Chandan inside and thrashed him too. Uttar Pradesh Police have stated that there was a case of ‘stalking’ involved, that these men (the badminton academy manager and two associates) will be arrested for ‘taking things into their own hands’ and that they have also identified the men who were actually stalking and harassing the female student. On the basis of Sanjay’s complaint, an FIR has been filed (FIR 0507/03-08-21) against the local youth with charges of ‘murder’ and ‘rioting’. Another complaint was filed days later by the girl’s father against the workers, in which they have been charged for ‘kidnapping’ and sections 12 and 18 of POCSO Act were also invoked. Sanjay said that this complaint has been filed to dilute the matter and they did not even see any girl in the car, as is being claimed in the complaint.

We also visited the academy, which had started functioning again after a few days of being shut in the light of this assault and death within its premises. A staff at a nearby store affirms, ‘They (the badminton academy folks) own this entire market area, all this belong to them, and those workers were poor fellows.’

Anuj, a young man of 21, had just joined his family in Gurgaon last month. He had worked in a factory in the Kadipur Industrial Area for a fortnight at a spare-parts producing unit. After taking a break for a day, he accompanied Sanjay to meet the contractor Chandan on the fateful day of August 2, in the hope of shifting to a better job. Someone who was witness to the assault called the police and it was the police who took Sanjay and Anuj’s corpse to the hospital. Chandan’s family accompanied him back to his home. Anuj’s body was taken home to Udpur Gelhawa in Badlapur Tehsil of Jaunpur district of UP.

Sanjay was scared for his life after he was admitted to the hospital, facing threats that he might be murdered too. His wife Hirawati panicked and accompanied him back to their rented room in Kadipur Industrial Area in the middle of the night. Her face was showing immense tension and anxiety when we spoke. Both Sanjay and Hirawati shared how much they feared staying in Gurgaon ever since the incident. He says, ‘We keep hearing of murders—someone has been killed here and there, a body recovered… These powerful men will do anything. I am going mad.’ Hirawati says she has hardly got a night of peaceful sleep since August 2.

Sanjay had come to Gurgaon two years back and has worked in various factories in the area. Hirawati does piece-rate work at home in order to supplement this income. Presently, she manages to earn Rs 25 for thousand pieces for work involving the clearing of rubber ends.

Just five months back, in February this year, Sanjay had lost two of his fingers in an accident while operating a mixture machine. In a previous injury to this, he had lost a small part of his finger while working at a power press earlier. It is upon Hirawati’s insistence that he had shifted to this new job, hoping it would be safer. And it is here where he had lost his fingers. The owner of Prachi Company took him to a hospital close by, where he was referred for surgery. The family had to borrow money from relatives and friends for medical expenses and continues to be on medicines for the same. The company owner paid for some hospital expenses but has not paid wages due for months before that. Sanjay has filed a case for compensation against the factory owner.

Since this accident, Sanjay has had no job, and the family has been surviving on meagre borrowings from here and there. Rent amount and ration expenses for months have not been paid, and they survive on the threshold of having to leave Gurgaon anytime. It is only a matter of time that the houseowner and the ration shop owner will lose patience and ask for their dues. It is into such a precarious scenario that one more relative had landed, when Anuj reached Gurgaon to look for a job. 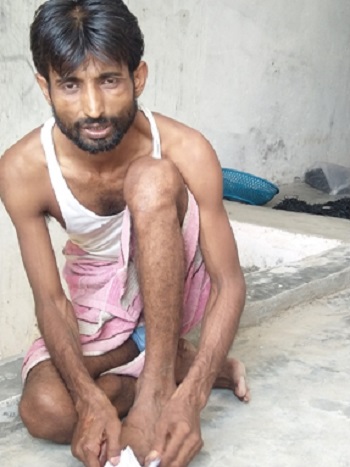 (Above: Sanjay at his residence in Kadipur Industrial area)

But the catch now is that Sanjay cannot leave without the permission of the police due to the ongoing investigations in Anuj’s murder.

Sanjay says he has been roaming around the entire industrial area for another job since his injury had started to heal but has not had any luck so far. The couple’s younger son stays with them while the elder one is at home in the village. He is thankful that the boy decided to stay in the village. ‘It would’ve been so much more difficult if we had to feed one more person.’ However, he goes onto say that there is nothing in the village either. The family has no land, nor are there any jobs available there. In the village, his family members work as labourers in others’ fields. On these fields, they earned between Rs. 250/- to Rs. 350 a day. Or they get work in construction sites from labour chowks. 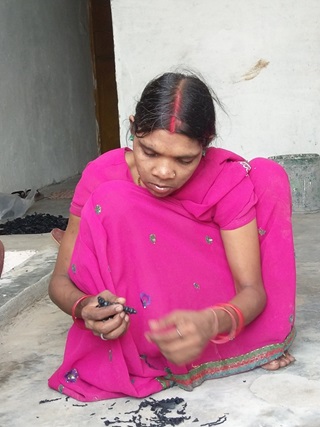 (Above: Hirawati, engaged in work.)

This week again, Gurgaon reported another case of kidnapping and thrashing of a 25 year old street vendor in Sector 86. Once again, assailants claimed this was on account of ‘mistaken identity’. One starts to wonder whether ‘mistaken identity’ is the new plank that will emerge to shadow on many cases of violence as social cleavages deepen in the pandemic struck cities.

Workers at a construction site in Noida recently erupted in protest upon the death of a worker at an ATS construction site. The police in Noida arrested 12 workers in this case. India lacks any comprehensive data on industrial accidents. Reports since the reopening of workplaces over the last year points to a phenomenal rise in the number of industrial accidents, related injuries and deaths of workers in the country.

What is unfortunate is that these are not ‘exceptions’, marked by violence of a spectacular kind. It is rather the norm. Take for instance Sanjay’s life—traversing through one industrial injury after another, without any respite or compensation and then to be pushed into more injuries, having suffered in the hands of local boys randomly zeroing in on him one afternoon. He is also the prime witness now in the murder case involving powerful locals.

It strikes as rather unusual that a Dalit worker has not been framed by the police yet, as is often the norm. The system often finds ways to protect the more dominant sections of the society – in this case, youth associated with an academy owned by the land-owning class/castes. Labourers, migrant daily-waged or contract-casual workers hailing from historically oppressed caste backgrounds are at a particularly precarious position in new megacities like Gurgaon and Noida, where caste and class contradictions have sharpened over the years. With the boom in real estate and other infrastructural development projects, these land-owning castes have become economically and politically even more powerful. The everydayness here is marked by an absolute impunity of the dominant castes through which class-caste inequalities are perpetuated. In this equation, migrant workers hailing from rural areas from far-away states are worse placed.

Far hidden from the many real estate scams that has marked the development of these millennium cities the many labouring lives here, caught in a Kafkaesque drama, who embody the distortions of a bigger sham—of having to seek justice amidst this madness. In Sanjay’s words, ‘Ladne ke liye aur shakthi nahi, khane ke liye paisa nahi. Par nyaay chahiye. (There is no strength left to fight, nor any money left for food. I still want justice.)’

PDF of the report