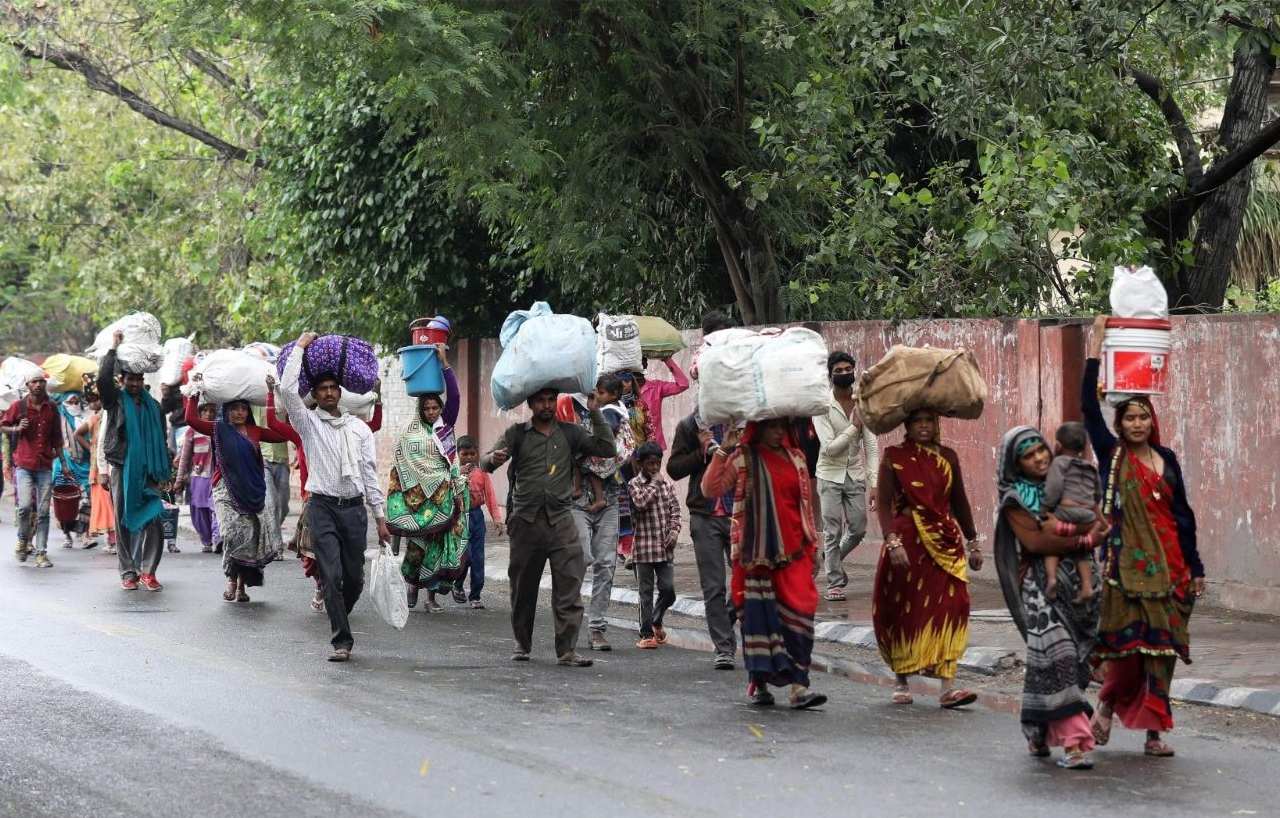 NAPM welcomes SC judgement on rations for all Migrant workers

The National Alliance of People’s Movements (NAPM), while welcoming the recent Supreme Court judgment on rations for all migrant workers and time-bound registration of unorganised sector workers, said that the Supreme Court has fallen short of delivering on its own observation of a “socialistic pattern of society”. NAPM emphasised that the struggle for holding the Government and Judiciary accountable to the working class must continue. It calls upon the central government and state governments to universalise food security and provide cash transfers to the millions who have lost livelihoods during the pandemic and are struggling to survive.

The sudden and unplanned lockdown imposed by the union government in March 2020 in the wake of pandemic had caused immense hardship to the informal sector workers. After much criticism and concern on its inaction, Supreme Court on 26.05.2020 took suo moto cognizance of “problems and miseries of the migrant labourers”. Later, several persons associated with people’s organisations and movements filed intervention applications in this writ. On 29th June, 2021 Supreme Court delivered its judgement after the matter was taken up again during the second wave of the pandemic.

Key directions from the judgment are summarised below:

Dry rations: The SC, while emphasizing right to food as a key facet of the fundamental right to life enshrined in Article 21 of the constitution, has directed the state governments to bring in place an appropriate scheme for distribution of dry ration by 31.07.21. Such a scheme as per court’s order may continue till the current pandemic continues. Court has further given directions to the union government to allocate additional food grains for these state schemes. The SC has said that all 2.8 crore migrant workers identified under the Atma Nirbhar Scheme last year by states must also be supplied rations.

Cooked food through community kitchens: The SC has directed state governments to run community kitchens at prominent places where a large number of migrant labourers are there, and these kitchens should continue to supply food at-least till the pandemic continues.

SC has directed the states to implement the “One nation one ration card” scheme by 31.07.21. This scheme provides portability of ration card throughout the country.

Revision of state-wise coverage under NFSA:

SC has noted that more than 10 years have elapsed since the state-wise coverage for issuance of ration cards under NFSA was determined and updating the numbers to the latest population count is bound to increase the number of eligible persons. It has directed the centre “to take steps to undertake exercise under Section 9 of the National Food Security Act, 2013 to re-determine the total number of persons to be covered under Rural and Urban areas of the State, which shall be beneficial to a large number of persons.”

Criticising the tardy pace of registration of migrant and unorganised sector workers which adversely impacts their ability to access benefits under various schemes, the judgment notes, “the apathy and lackadaisical attitude by the Ministry of Labour and Employment is unpardonable”. Further, calling out the central and state governments for paying mere lip service to well-being of workers, the judgment states, “tall claims by all the States and Union that they have implemented various welfare schemes for the migrant workers and unorganized workers remain only on paper without giving any benefit to unorganized workers.” The SC has directed, “the Central Government to develop the Portal … for registration of the unorganized labourers/migrant workers. We also impress upon and direct that the Central Government as well as the respective States and the Union Territories to complete the process of Portal for registration under National Database for Unorganised Workers (NDUW Project)…the process of registration of the unorganized labourers/migrant workers is completed at the earliest, but not later than 31.12.2021.” Further, it has directed, “all the States/Union Territories to register all establishments and license all contractors under the Act, 1979 and ensure that statutory duty imposed on the contractors to give particulars of migrant workers is fully complied with.”

National Alliance of People’s Movements (NAPM) welcomes the progressive aspects of the judgement and sincerely hopes that the Centre and state governments would implement these in right earnest, to ameliorate the conditions of the working class. The directions on ensuring dry grains and cooked food for migrant workers till the end of the pandemic are significant. Registration of workers, a welcome measure, needs to be supplemented by new schemes that provide for them.

It remains to be seen, especially after the failure of the state to implement the Unorganized Sector Workers Social Security Act, 2008, how effective will be the implementation of SC direction to identify and register informal sector workers. The Inter-state Migrant Workmen Act, if implemented properly, can have a long-term impact on reducing the exploitation of migrant workers. Correcting the undercount problem in issuance of ration cards is a crucial issue. While the directions are important and can potentially lead to nearly 13 crore additional people (over and above the current 80 crore) being provided ration cards, the SC has not given any timeline for this.

However, in the face of the severe distress of workers in the pandemic, as recorded by the SC itself, we are of the opinion that the Apex Court has fallen short of delivering on its own observation of a “socialistic pattern of society”. We are dismayed to note that the plea for emergency cash transfers to pay for basic necessities including rent, education of children, gas, oil and milk has not been accepted. Terming it a “matter of policy and being in the domain of the State”, the SC has declined to give any directions in the absence of a specific scheme by the states/union.

When millions have lost livelihoods and are struggling to pay for basic essentials, cash transfers are crucial to help people tide through this difficult period. The severe health crisis in the second wave forced many to take loans in order to pay for essential medicines and oxygen which were being sold at astronomical rates due to black markets. The world over, countries have done cash transfer schemes, which not only provide a lifeline to people in economic distress but also keep the local economy going.

The SC in its 80 page judgement has cited constitution bench judgement (National Textile Workers’ Union and Others Vs. P.R. Ramakrishnan and Others, (1983) 1 SCC 228) emphasizing the importance of workers in “socialistic pattern of society”. During this time of unprecedented distress, the central and state governments have failed to provide adequate economic packages for people to meet their basic need of food, clothing and shelter when a large number of informal sector workers have lost work. All evidence points to a deep crisis of increasing poverty (23 crore additional people have slipped below the poverty line in the last one year as per a Azim Premji University report) and growing inequality (income of Indian billionaires grew by 35% during the lockdown while 84% of the households suffered varying degrees of income loss according to an Oxfam report).

We call upon the central government and state governments to universalise food security and provide cash transfers to the millions who have lost livelihoods and are struggling to survive.