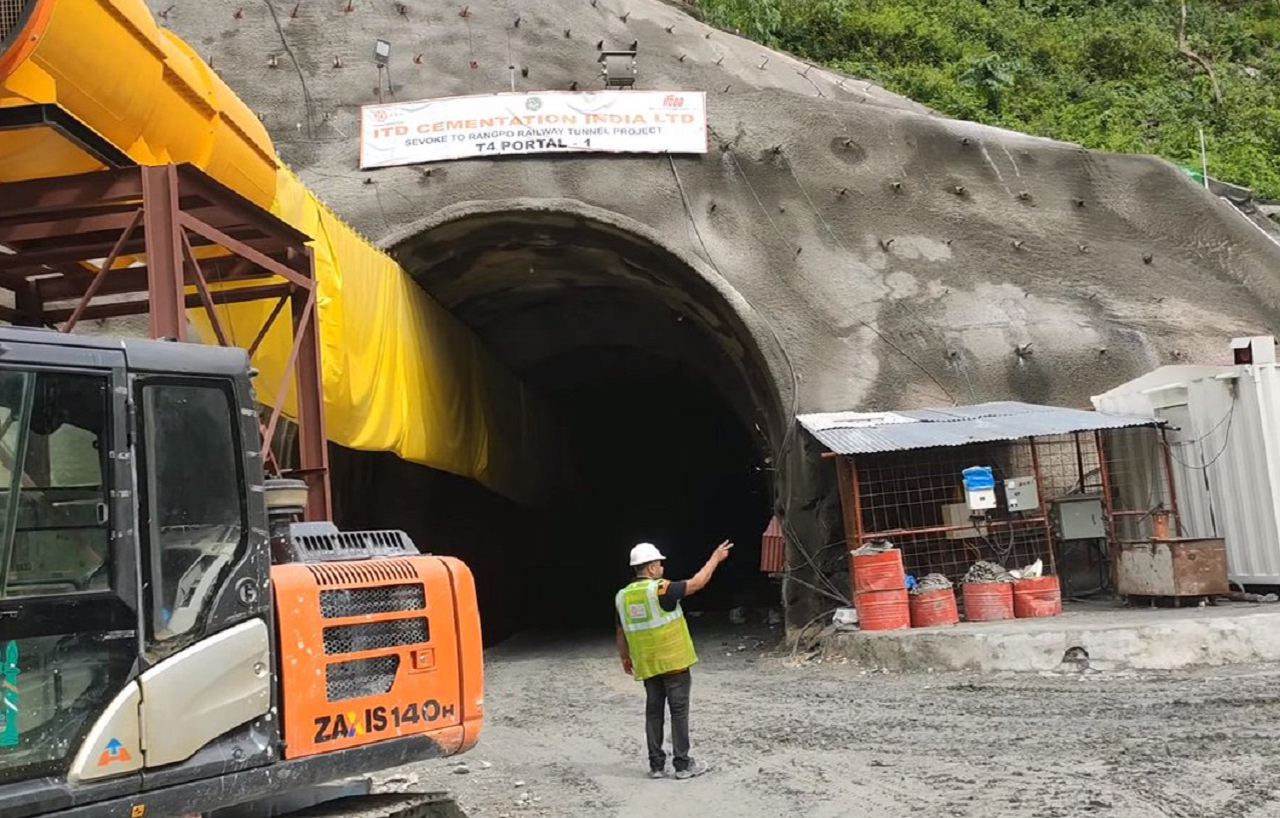 We have arrived at a time when thinking about development without taking into consideration the primary importance of ecological balance and it’s sustainability is a hoax, because doing so will be hazardous not only to the environment but also to the ones whose lives are closely intertwined with nature and it will also endanger the workers involved in the large-scale construction works that usually are must for development projects, writes Sumendra Tamang, in the context of the recent death of two workers in an under-construction tunnel collapse at the Sevok-Rangpo Railway Project site in West Bengal.

COVID 19 has tilted the entire nation upside down and shaken the whole country like never before. With countless deaths and innumerable horrid stories of the pandemic, many issues which need immediate attention have been side-lined and overshadowed. One such issue is the pathetic and hazardous condition of construction workers. Although the construction of the new parliament structure under the Central Vista Project attracted media attention, not many of similar stories have come to the fore. Right now many of us are staying indoors, quarantined and isolated, but for the large mass of daily wage earners the situation is dissimilar, if not grimmer. Construction work (both private and public) is going on all around us even during the pandemic period. One such instance is the 4085 crore (approx) Sevoke – Rangpo broad gauge railway project under the aegis of Indian Railways Construction Company Limited (IRCON), incorporated under the Ministry of Railways.

Sikkim is all set to get its first railway connection with the rest of India. The 45km long route starting from Sevoke (West Bengal) to Rangpo (East Sikkim) will have 14 tunnels, 14 major bridges, eight minor bridges along its way. According to sources, the railway line will have five stations mainly Sevoke, Riyang, Teesta Bazaar, Melli and Rungoo. It is also said that 70% of the route will be built in tunnels with the longest being 5.13 km in length and the longest bridge will be around 375 metres. On 30 October, 2009, the foundation stone for the project was laid by the then Railway minister, Mamata Banerjee and the Vice President of India Hamid Ansari. Due to repeated delays, the project was finally initiated in 2017. It is learnt that the total expenditure will be borne by the Ministry of Finance and Railway Ministry of India.

On 17 June 2021, at around 10.30 PM, continuous monsoonal rain led to the collapse of a part of the tunnel 10 being built at Bhalu Khola near Melli. Severe rock slides trapped seven workers inside the tunnel. The local police had to rush to the spot and dig out the trapped workers. Out of the seven, two workers were declared dead at Kalimpong district hospital. The deceased workers, Salku Murmu and Naresh Soren, both hail from Jharkhand. Local sources say that both the deceased were working at large drilling machines and were closest to the wall, thus sustaining the worst injuries, which resulted in their death. The other five workers, namely, Sufal Hembrem, Sukeshwar Singh, Thakur Das, Ashok Singh and Kundan Singh are undergoing treatment at Kalimpong district hospital and North Bengal Medical College and Hospital. The work on the railway line has stopped for the time being, an investigation is underway and ‘adequate compensation will be provided to the family of the deceased’ said Mohinder Singh, Project director of IRCON.

It however needs to be mentioned that the terrain on which the construction work is going on has long been considered dangerous, particularly during the rainy season: landslides and floods are usual occurrences.

From an environmental perspective, this railway project has always been contested by environmental activists as well as local forest villagers living in areas adjoining National Highway 10. The NH10 and the entire terrain is a known landslide prone area, where construction work of any kind is bound to adversely affect the already endangered slope stability of the geologically fragile hillsides. This vulnerability needs serious and immediate attention. Right now as we speak, heavy rain has already triggered multiple landslides along the route. Many environmental activists have always asserted that use of drilling machines and powerful explosives for tunnel construction along the rail line would turn out to be extremely hazardous for the locals and the environment. This would mean a huge risk for the workers deployed inside those tunnels. The National Highway authorities and the local forest villagers have also claimed that building of low lying dams at Kalijhora and Rambi by the National Hydroelectric Power Corporation (NHPC) is the reason behind frequent landslides in the valley side which is damaging the whole stretch. On the other hand, NHPC has held the poor drainage system accountable for recurring landslides along the stretch.

Adding to this, forest village activists claim that around 24 forest villages and several thousands of forest villagers would be affected by the railway project, which the locals claim would be disastrous to the livelihood as well as the environment. According to the Forest Rights Act, 2006 (FRA 2006), unless and until the Gram Sabha (general assembly of villagers for decision making) issues a No Objection Certificate (NOC), no such  projects can be initiated even if it’s a government aided one. In 2019, due to the non-compliance of FRA 2006, construction of a flyover over Rungpoo River was stopped by Calcutta High court. The locals also claim that many were forced to give consents coming under administrative and political pressure. Without taking into consideration the relentless resistance of forest villagers and local activists the project work was started citing its ‘importance to national security’. What indeed is often heard is that this ambitious project is a part of the Central government’s initiative of improving connectivity with the Indo-China border in Sikkim, to help in the mobilisation of military and heavy machinery, if the situation demands. Meanwhile many forest villagers were hounded and activists mishandled for their resistance against this project.

Another important question that the activists raise is that of illegality of the railway project. Most of the railway tracks in this project are passing through forest areas, they point out, flagging that use of forest land for non-forest purposes is strictly prohibited under the law. According to the Forest Conservation Act 1980, all non-forestry activities on forest land require prior permission in stages from the Ministry of Environment, Forests and Climate Change, Government of India. So far as it could be ascertained, the Sevoke Rangpoo project hasn’t yet received this permission. On what basis then, they continue to occupy forest land, destroy trees at will and construct tunnels and roads, asks activists. The project, they say, has already been challenged in the Kolkata High Court.

Development has many sides to it and questions are always asked as to what kind of development do we precisely end up with?

And development for whom? And at what cost?

As always the government says that the project would create employment and accelerate tourism. But when voices are raised about the environmental and social cost of such projects, dissent is suppressed using state machinery. At a time when concerns for the environment are paramount, our Prime Minister, while addressing the students on Teachers Day, was reported in the media as saying: “Climate has not changed. We have changed…our tolerance and habits have changed. If we change then God has built the system in such a way that it can balance on its own”. If this is the attitude of our Prime Minister on Climate Change, how can we expect development by such a government to be eco-friendly? The hills of Darjeeling and Sikkim have always been earthquake prone and academics and scientists have repeatedly claimed that unwanted and continuous exploitation of nature will prove to be disastrous for the locals as in the case of Uttarakhand and elsewhere. With heavy rainfall every year and such environmentally harmful projects, accidents and natural calamities are bound to happen. But the death of two workers is not a natural incident as questions arise as to why the workers were made to work even when it was raining heavily? Meanwhile, Salku Murmu and Naresh Soren will not see the development that the government has promised.

On the bright side, 64 forest villages of Kalimpong district have been converted into revenue villages by the State government as notified on 18 September 2020 and this is a sign of relief to the Forest villagers of Kalimpong as they are one step ahead in their fight for ownership of their ancestral lands. This may be an appeasement move by the state government to please the villagers for not going against the project and also a political move by the TMC government to abide by their promise in their manifesto of granting land rights to the forest villagers. But the question arises as to why other districts were exempted from the said notification? But one thing is for sure this is a victory for the Forest villagers of Kalimpong.

Development follows displacement and vice versa, and with it arises dissent. Sandwiched in all of this are the most marginalized of our society and our embattled environment, because the development pattern that is being followed here is lopsided, undemocratic and not at all pro-people. If the development pattern is not inclusive of environmental well-being, it is not development in the first place and is not aimed at the overall progress of our society. We have arrived at a time when thinking about development without taking into consideration the primary importance of ecological balance and it’s sustainability is a hoax, because doing so will be hazardous not only to the environment but also to the ones whose lives are closely intertwined with nature and it will also endanger the workers involved in the large-scale construction works that usually are must for development projects. All in all, the occupational hazards involved in such development will escalate, and lives would be unnecessarily lost; a hard price to pay for such hollow models of development for the few.

(The author is a social and cultural activist from Darjeeling)