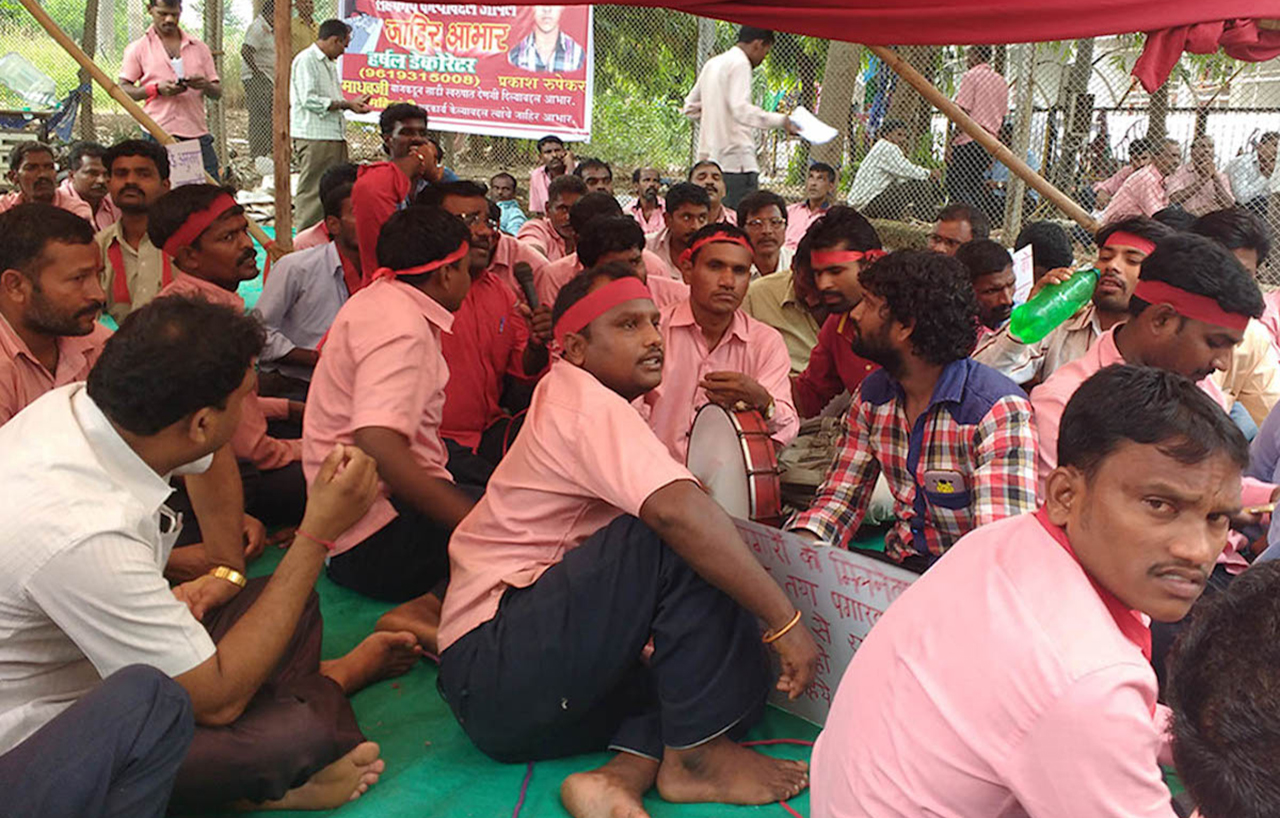 After 3 long years, the five workers of Mumbai Electric Employees Union are out on bail. The State which arrested these workers under UAPA in the aftermath of Bhima Koregaon incident has not been able to prove any of its charges. These workers were guilty of one thing only, they were to organise contract workers against their mighty owner Reliance. As they could not be charged of these activities as treason, the State keeps finding flimsy charges to keep hundreds of activists and workers in jail under other pretexts.

While they still have a long way to go to clear the charges against them, their union Mumbai Electric Employees Union has released the following pamphlet in solidarity with the arrested workers and to continue the struggles of exploited contract workers against their management. This pamphlet was translated in hindi, tamil and telugu and was distributed among workers. A TNLabour publication, republished at Groundxero.

On May 5, 2021 Bombay High Court of Justice Bharati Dangre passed a judgement in the bail application filed by Saidulu Singapanga, who was in jail from February 5, 2018, granting him bail. Comrade Saidulu, Tilak Nagar unit secretary of Mumbai Electric Employees Union (MEEU) was the last of the five MEEU activists to get bail. Four others, Comrades Shankar Gunde, Ravi Marapalle, Babushankar Vanguri and Satyanarayan Karela were all released on bail from end 2019 to early 2020. At last, Com Saidulu too was able to walk out of the jail on May 10.

Bail was the outcome of a prolonged legal battle fought under the helm of Adv Sudeep Pasbola who was assisted by Advocates Arif Siddiqui and Susan Abraham. Initially Adv. Arun Feriera appeared for the Reliance workers from the time of their arrests on January 13, 2018 till he himself got arrested under UAPA in the infamous Bhima Koregaon case who is still in jail along with 15 others.On January 13, 2018 Comrades Shankar Gunde, Ravi Marapalle, Babushankar and Satyanarayan Karela were arrested by Mumbai ATS. Comrade Saidulu was arrested on February 5, 2018. All were arrested under the Unlawful Activities Prevention Act (UAPA). They were charged with sabotage for the strike by all Reliance workers that took place on December 19, 2017, when a co-worker died without receiving medical treatment under ESI for which he was legally entitled. Added charges against them were purportedly for sheltering a person accused of being a terrorist, and for raising funds for a banned organisation.

During the arguments on Saidulu’s application for bail, Adv Pasbola was able to demonstrate before the Hon’ble High Court from the documents submitted by the prosecution that nothing incriminating was seized from Saidalu nor was any criminal activity alleged against him to invite provisions of a draconian law such as UAPA because of which he remained incarcerated since February 2018. On the charge of collecting money from contractor, Mr Pasbola pointed out that donations were given by the Contractors Association by way of cheques to various union leaders and activist based on a common resolution passed by the Contractors Association, during Shivaji Jayanti, May Day/Maharashtra Day, Diwali etc.

In the order granting Saidulu’s application for bail, Justice Bharati Dangare said: “I do not, prima facie, see the material sufficient to indict Mr. Singapanga under all the aforesaid mentioned sections of UAPA. He need not languish in prison any more in the wake of the material compiled against him. The material also does not indicate any act which causes or intended to cause disaffection against India.”

Why then only MEEU activists were chosen for arrests and kept in jail custody?

That needs an explanation. Workers form unions to use their collective strength and power to safeguard their interests and in order to collectively bargain for more secured, better life. Unions are created to oppose exploitation, for job security, self-respect and uphold labour rights. Unions are definitely not formed to side with employer, support the exploiter against the collective interest of workers on payment collected from employers and their agents. In Reliance and in its earlier avatar, BSES, nearly 6000 so called contract workers mostly from Telengana were treated like slaves. No account is kept as to how many died of electric shocks while working. Death compensation was a measly sum of Rs.25,000 till 2005.

MEEU from its inception voiced collective grievances of workers, demanded payment of wages before 10th of every month, issuance of pay slip, payment through bank, identity cards, uniforms, safety shoes, rain coats, festival holidays, leave facilities, ESI, and on the top of all right to become permanent based on seniority as per PF joining date. Which other union struggled for such demand on the company for the so-called contract workers? Will the recognised union show any evidence in this respect? MEEU consistently fought for workers’ rights and received widespread support from workers cutting across unions in Reliance. In its various struggles which culminated in victories by which workers received payment of wages around 10th of every month, got pay slips, payment through banks, uniforms, safety shoes, rain coats, death compensation, management paid more attention to occupational health and safety, payment for 4 festival holidays, 21 days annual leave, atleast some sum towards annual bonus so on and so forth. ESI was the last in this series. The company had to shell out 4% of wages of 4000 workers towards ESI which appeared to be a huge burden for them. Reliance had saved Rs. 44 crores denying insurance coverage to its so-called contract workers. Reliance was annoyed with MEEU and its activists who were solely responsible for the huge “expenses” compelling the company to cover workers under ESI which might have caused a dent in their profits.

Legal cases were filed and fought vigorously through committed labour lawyers like late Adv. A. P. Kulkarni who happened to be an office bearer of MEEU. MEEU’s success was its union cadres in different service centres. We knew any union in its fight against capitalism will have to pay a price.

In December 2007 Reliance dismissed 11 activists on flimsy charges. In December 2018 Adani succeeded Anil Ambani’s Reliance and immediately suspended 4 activists alleging stoppage of electric supply to consumers in Tilak Nagar by organising a protest strike. In January 2019 five leading activists were arrested by ATS terming them ‘terrorists’. The dismissals of 11 in 2007, suspensions of 4 in December 2018 and the arrests of 5 were calculated steps to silence the workers and dampen their spirit. These actions did have an impact on workers. The conspiracy against struggling workers by Reliance and Adani could create confusion among workers for some time inevitably leading to distancing them from real unions on the ground of false police cases, arrest and jail, losing jobs and livelihood. This was quite natural.

But wherever there is exploitation there is resistance.

Cutting across unions in Adani Electricity, workers have decided to stand firm and fight for their rights. The new Labour Codes have been framed by the central government to benefit exclusively employer class. Such development in the labour arena makes clear that not only the so-called contract workers but permanent workers too are not spared. This makes it inevitable for all workers to stand together to oppose labour law changes on the one hand and fight against exploitation and free workers from all types of tyranny.

MEEU is committed to continue to uphold trade union democracy and embrace all those who wish to stand together.

MEEU would emerge victorious in its fight for permanency. MEEU would succeed in getting reinstatement of the dismissed workers.

Comrade Saidulu Singapanga’s coming out of jail on May 10, 2021 and the bail secured by Comrade Shankar Gunde, Ravi Marapalle, Babu Shankar and Satyanarayan Karela earlier would cement the unity of workers. The trial of the case is pending. We will defend the right of workers with our might.

Victory belongs to those who fight.