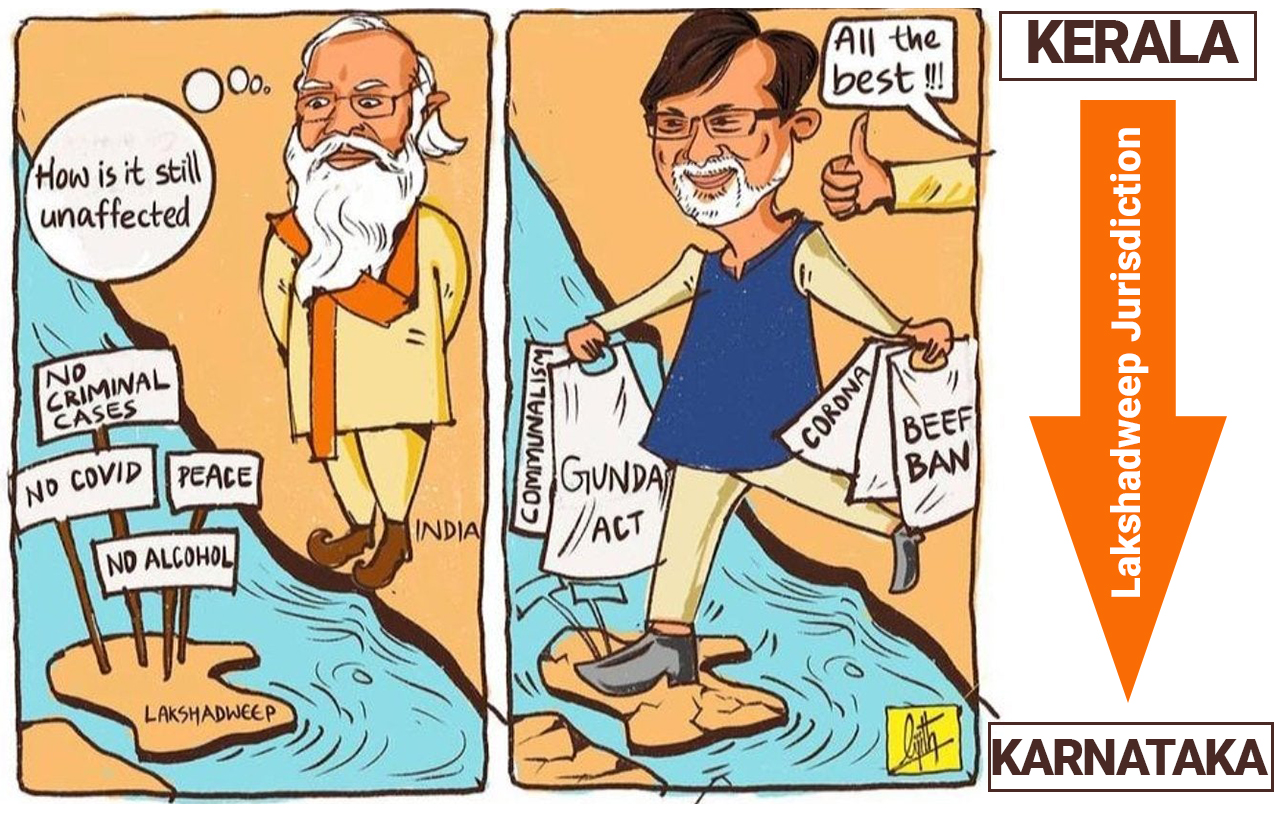 Lakshadweep Admin Moots Shifting its Jurisdiction from Kerala to Karnataka

Facing widespread peoples’ protests and legal challenges to its controversial policies, Praful Patel, the Lakshadweep administrator has initiated a proposal to shift the legal jurisdiction of the Union Territory from Kerala to Karnataka. A Groundxero report.

Lakshadweep administration under Praful Patel is facing widespread protests from the islands’ people over its policies, which have been deemed to be not only “undemocratic” but also potentially destructive for the island’s ecology and culture. Several litigations have been moved before the Kerala High Court challenging those policy decisions. Facing peoples’ protests and legal challenge to its controversial policies, the Lakshadweep administration has initiated a proposal to shift the legal jurisdiction of the Union Territory from Kerala to Karnataka.

Legal experts and activists see this proposal to shift the jurisdiction as politically motivated. They have pointed out that this move makes no administrative sense because:

The ruling Hindutva regime backed by neo-liberal capitalists has its eye on seizing land and developing Lakshadweep into an international tourist hub “like Maldives”. Praful Khoda Patel, an RSS cadre who served as MoS Home Minister of Gujarat under Chief Ministership of Narendra Modi, was sent to the island as the new administrator of Lakshadweep in December 2020, to achieve this objective.

Praful Patel, disregarding local opinion and sentiments of the traditional dwellers of the island, announced a set of controversial new regulations like:

These proposals has triggered a massive outcry among the local residents who say that the new regulation will destroy the islands’ character and identity since 97% of the islands are covered by pristine forests and 95% of its population are Muslim by religion and belong to the protected scheduled tribe category. They fear that these rules will ultimately lead to cleansing the islands of its original inhabitants and its takeover by outsiders.

The Save Lakshadweep Forum (SLF), a joint platform of six Lakshadweep political parties formed to facilitate the protests against the proposed rules, has been demanding both Patel’s removal as administrator and withdrawal of controversial draft laws and executive orders of his administration.

On 7 June, the residents of Lakshadweep had observed a 12-hour hunger strike to protest against the proposed rules Local residents undertook fast in their homes and all shops and establishments, except emergency services, were closed. The residents protested holding placards outside their homes and shops, with some even seen holding placards underwater, during the first major public protest in the archipelago against the controversial decisions that administrator Praful Khoda Patel is forcing upon them. 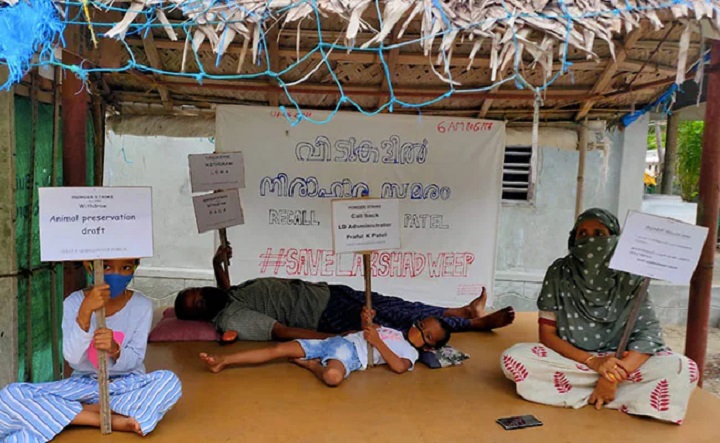 A 12-hour hunger strike on 7 June in Lakshadweep

On June 10, Lakshadweep based woman filmmaker Aisha Sultana, was charged under the sedition laws for her use of the term ‘bio weapon’ during a television debate to describe the island administration’s measures that led to spread of Covid virus in the islands. Terming the sedition case against Aisha as “unjust and false”, Abdul Hameed Mullipuzha, BJP state party leader in Lakshadweep resigned from the party, followed by 14 other leaders and workers of BJP, who too tendered their resignations from the party. On 17 June, the court High Court allowed her interim anticipatory bail and ordered that she should be granted bail if the police chose to arrest her after questioning. 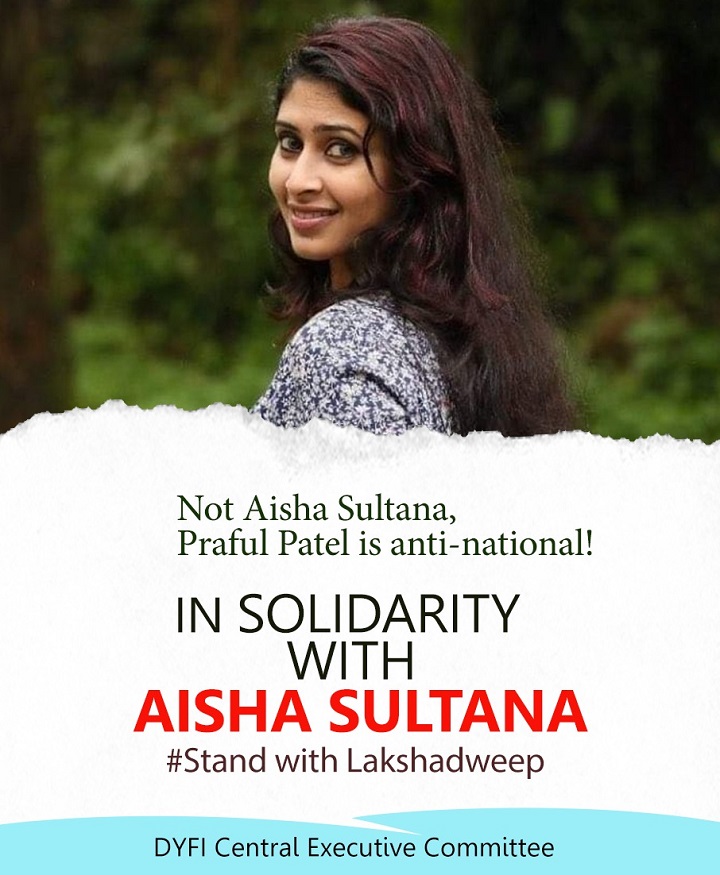 The SLF had called for observation of a ‘black day’ on June 14, when Praful Patel was due to arrive for a seven-day visit to the union territory. Patel’s schedule included attending a number of discussions and meetings on smart city projects, power privatization and eco-tourism projects in the islands. The ‘black day’ protest was the second significant peoples’ protest against Patel during this month. 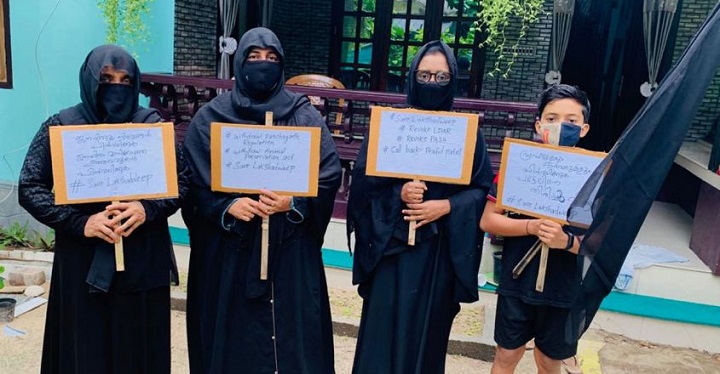 The political parties and people of the archipelago and Kerala are totally opposed to this latest move of Patel to shift the jurisdiction of the islands from Kerala to the BJP ruled state of Karnataka. They plan to oppose it both politically and legally.