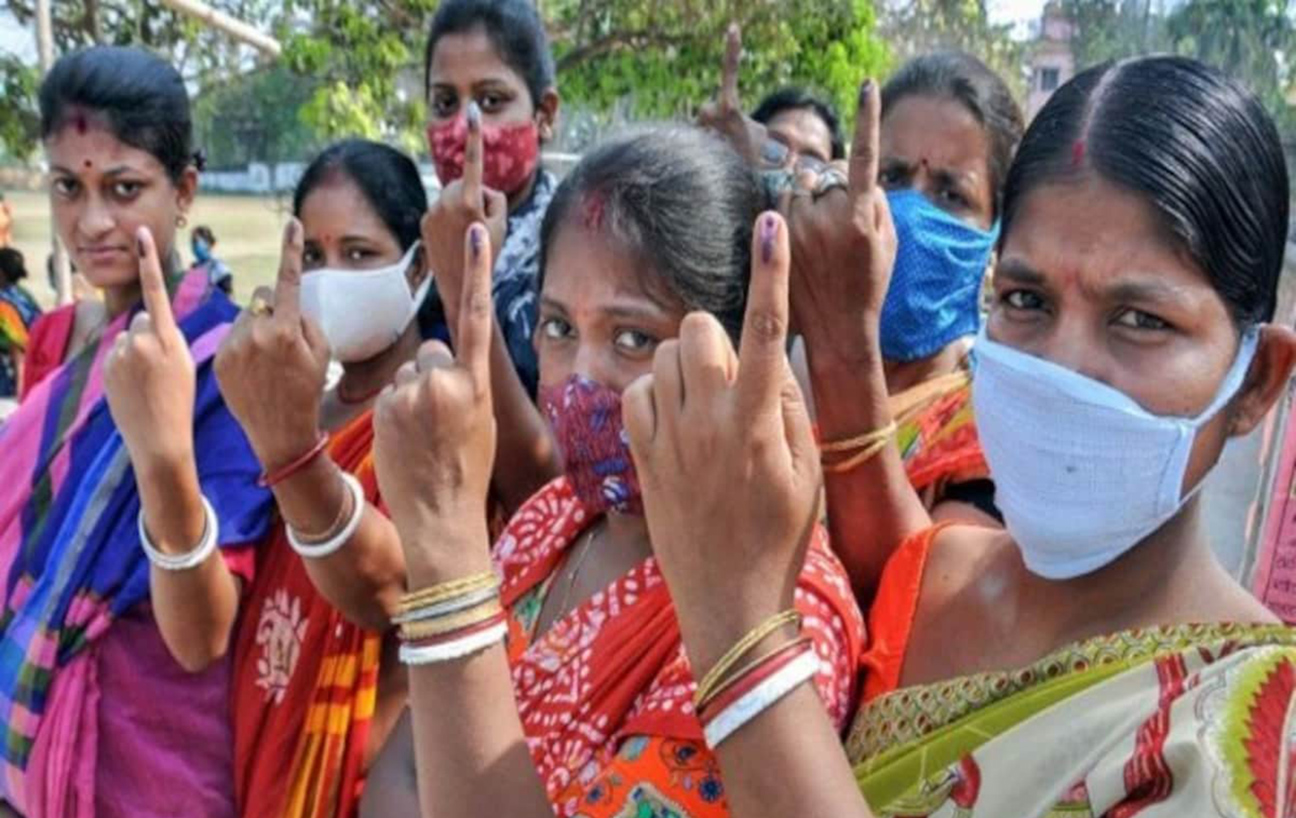 Why and How Women Voted in the Bengal Assembly Election 2021

Women accounting for nearly 49 percent of West Bengal’s population have played an important and decisive role in the victory of Mamata Banerjee in the just concluded assembly election in the state. Sudarshana Chakraborty talked to various women to understand why and how women voted in the election. 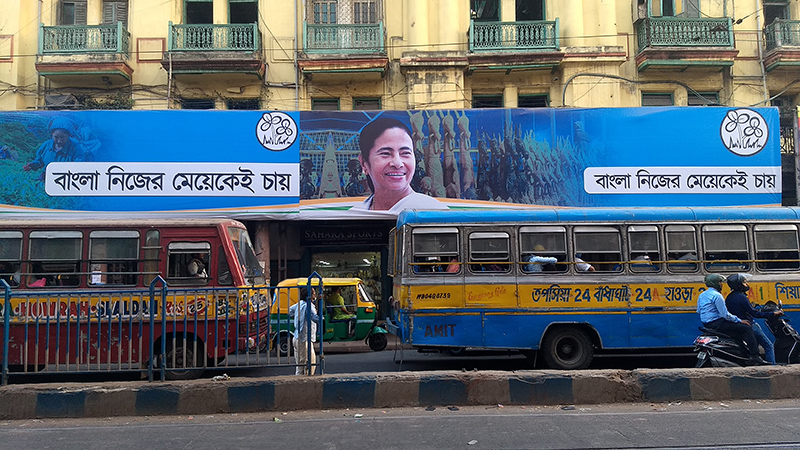 All these show that ‘woman’ as a category played a prominent and decisive role in the 2021 assembly elections in West Bengal. Not only did the Mamata Banerjee led TMC — the ruling party of the state — but also the BJP, which projected and emerged as the primary opposition to her, used ‘woman’ and issues cantered around the category as one of their trump cards. Even, the CPI(M), while nominating their candidates, projected young female faces to take on Mamata Banerjee, and woo the electorate.

Poll data revealed, the number of women voters, too, have increased notably in different phases of the 8th phase long assembly elections in the state. In some of these phases, women voters’ turnout was as high as almost 50%, in other phases, their turnout was even higher than that of men. So, the women not only demonstrated their political agency but seems to have come a long way from the days of voting under the influence of family patriarch or the dictate of the community. Further, this time around, women voted keeping in mind issues that have an impact on their social, economic existence and on their gender identities. As it came out, the disrespectful comments made by the Prime Minister, the Home Minister and many other national and state level leaders of the BJP towards Mamata Banerjee, the Chief Minister of the state, made the majority of the women in the state angry and annoyed. No matter which party they support, they took these comments as humiliation of the women of the state. The mockery in the PM’s voice while addressing the CM as “Didi O Didi” clearly backfired, as it did not go down well with the women here.

During the Mahapanchayat held in Kolkata, by the visiting representatives of the farmers’ protests in Delhi, this reporter spoke to Khushdeep, a 65 year old Sikh woman, residing in Kolkata for many years,  said, unequivocally, “In my entire life, I am, for the first time, witnessing a PM speaking in such a humiliating manner to a state’s CM.  Modi is the PM of the entire nation, and not only a party’s spokesperson. He has no respect for women. He isn’t just saying these to the CM, he is actually humiliating all the women in the state. We’ve seen CPI (M) rule for 34 years, TMC for 10 years – we as women never felt like this. I hate him, his words are dirty. I get angry – how can he speak like that to a woman? We live here in peace. We can’t destroy that at any cost.”

At the same rally, Meherunissa and Ramanpreet Sodhi pointed out that women’s safety was one of the issues that would receive immense primacy when they would go out to vote. As women, they feel safe to roam around anywhere in the state, which they feared would be gone, if BJP comes to power. “We can’t allow this state to become another UP. We urge people to vote for any other party, but not BJP. We will resist BJP from coming to power with all our might,” they said assertively.  This is probably the sentiment that had set the mood for the assembly elections in the state.

Saleyara Bibi, Ajiya Bibi and Hajira Bibi of the South 24 Parganas district, on the other hand, earned their livelihood from self- help groups. The future of such groups, children’s education, women’s safety and preventing girl trafficking in the area, were the issues they had in mind, when asked in a pre-poll conversation about the issues that would determine their votes in the upcoming election. Just as Krishnakali Mukherjee and Tania Chowdhury, both teachers, married, and in their forties, pointed out that the issue of employment was of utmost importance for them. According to Chowdhury, “In the last ten years the job market scenario in the state has shrunk a lot, especially in the teaching profession. We need a transparent recruitment process, so that our next generation does not suffer.”

Mukherjee said, “The sheer discrimination between the pay scale and work pressure in private and government schools must be addressed by the government and new recruitments of teachers must be made.” According to both of them, inflation is a major issue affecting the households. The increasing costs of articles of everyday use, and especially the enormous hike in the price of cooking gas, seem nightmarish to them. Also many of the women I talked to, being the single child, have to take responsibility of their ageing parents. So inflation has a double impact on their lives. Chowdhury added, enormous hike in the electricity bills for the past year has been a major concern, while Mukherjee added that during this pandemic, the administration should have taken major steps to control hoarding of essential products and ensure fair distribution amongst the citizens. Both of them agreed that women’s safety, in comparison to other states, is much better in West Bengal. Mukherjee drew attention by saying, “The cost of living is still low in our state compared to any other metro cities. There is a middle class population who are surviving well here. Show me one other state where this is possible!”

For Shreyatama Dutta, a queer feminist activist from Kolkata, it was the ‘Love Jihad’ law which played an important role in her decision regarding who to vote. . She was anxious about implementation of this law in West Bengal if BJP comes to power. “While casting my vote against the communal BJP, anti-woman ideology and the celebration of such mentality was very important. For me, my vote has to be against the patriarchal and toxic Hindutva masculinity. The steps which the central government took during last year’s pandemic and lockdown were anti-woman in the broader perspective, keeping that in mind was important in this assembly election. In Bengal, for women, the citizenship issues like NRC and CAA were also major deciding factors. A woman whose surname changes after marriage and who has lost her links to her ancestral family, these laws are a huge threat. Poor Dalit and adivasi women, who largely do not have documents, are also anxious about having to prove their citizenship,” she said. Kajgeria has worked as an active participant of the ‘No Vote to BJP’ campaign, a civil society initiative in West Bengal.

Murshida Khatun, head mistress of a girls’ school in a Muslim dominated (over 70%) area called Beldanga of Murshidabad district in Bengal, and a social activist, emphasized the anxiety over the NRC-CAA issue, which played an important role when the rural minority community women cast their vote in this election. She explained, “It almost became a nightmare, an existential question for many of us, especially women, for whom their whole lives are so tied to their homes. Women were scared if their homes would belong to them anymore or not! They were afraid of losing their familiar neighbourhoods, homes, and country. We never heard citizens being addressed as Muslim or Hindu like this before in Bengal. To resist this fascist force has been important for us. The educated, liberal women, too, became anxious that their right to live, right to think, right to choose will be seized. On the other hand, Mamata Banerjee’s government might have many inherent problems, but her women empowerment schemes were actually satisfying – be it the different education schemes, giving importance to women in the last Swastha Sathi (Health card) scheme etc. At a time when we still have to fight for property, land rights, when a girl receives her money for education under a government scheme or the Swastha Sathi is issued in the name of the woman of the family, it does make us happy. Recognition of the female identity, writing the mother’s name are surely some kind of empowerment. We hope that this empowerment will lead us to a society where there will be equality of man and woman. I believe if the developments keep on happening even when the new government is formed and the focus is kept on the employment of women, the rural girls and women will gain a lot. Women did cast their votes keeping in mind these general and specific issues.”

But there was a dilemma also while choosing a political party or the right candidate for many of these women. Though in assembly elections, the local or regional issues are often prioritized, this time around, the national issues, too, played a decisive role. And the communal politics of BJP-RSS was a deciding factor for the majority of the women. As the publishing editor, Somaya Akhtar, who is based in Kolkata, but hails from Murshidabad district, and often travels extensively in rural Bengal said, “This time I was confused about whom to vote for. I’m a leftist, but I knew voting for the Left Front wouldn’t have helped to resist the fascist and communal force like BJP. Also, it was impossible for me to cast my vote in support of the left alliance when there is someone like Abbas Siddique there. On the other hand, even though I criticize the TMC government on many issues, one thing must be applauded – the Kanyashree scheme for the education of the girls and several other schemes, have aided the education of girls from economically deprived families. It has helped to stop the child marriage in a huge way, now the families encourage their daughters/girls to continue to go to school, because they will receive the monetary support from the state government. I’ve seen girls getting married before they reach puberty and die during childbirth and now I can see girls who are graduates or even have master’s degrees. Development of roads, transport and rural electrification have been done in the last 10 years. The schemes that BJP flaunted in its election manifesto as being beneficial for women, have failed to create any impact on women at large. We could not allow a party to control our personal choices regarding what to wear, what to eat, whom to love. Also many women depend on the interests coming from many saving schemes of the banks. But, have you seen how the interest rates have been reduced. Why will they vote for such a party? And lastly the most important part is that, no woman can vote for BJP if she is concerned about her own safety or has any self-respect. Even the women leaders in BJP spoke so disrespectfully about women of other parties. Shameful! As a woman, as a Muslim woman, as a citizen I feel happy that this force has been defeated.”