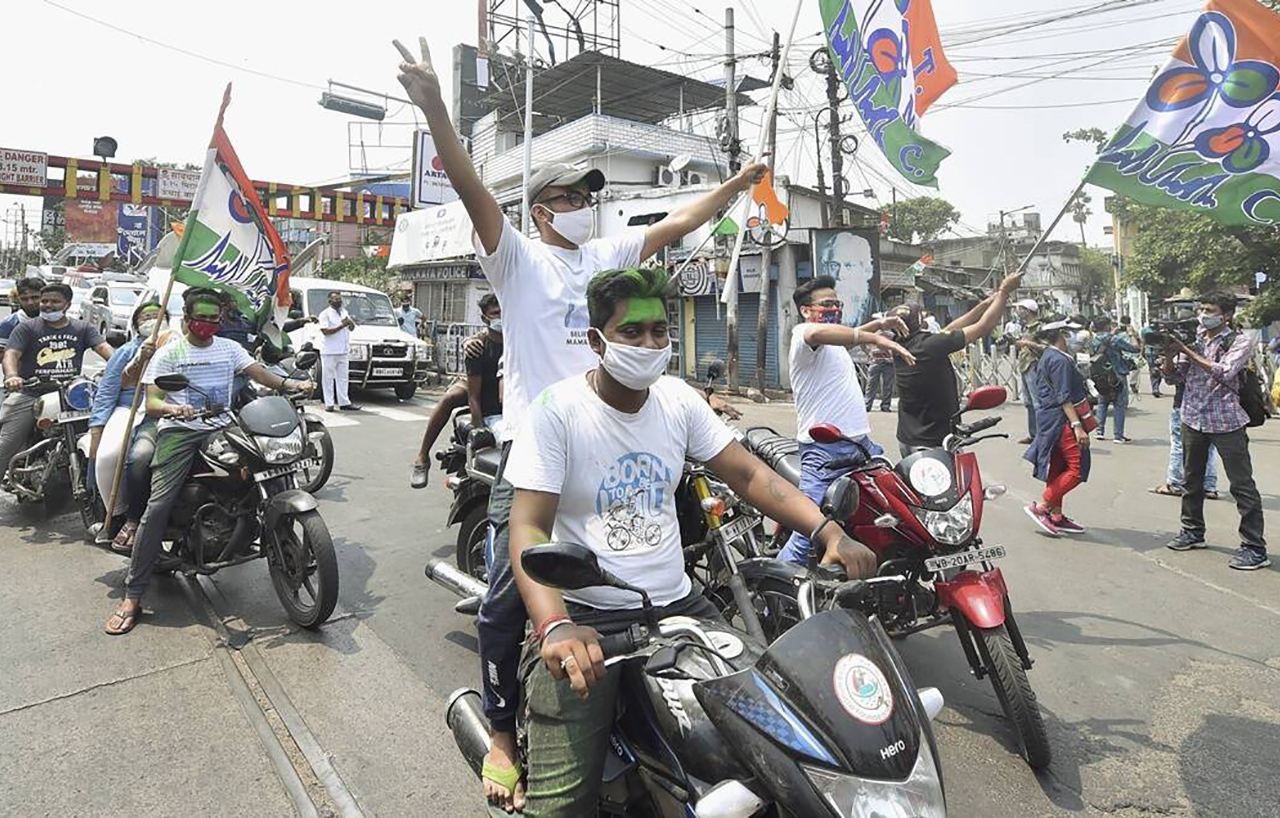 Prakash Belawadi, a theatre artist in Karnataka, is known nationally and internationally for his movies. Prakash is a staunch supporter of the BJP. His recent Facebook post predicting that a pogrom like the Gujarat Massacre would take place in Bengal has caused a social media storm. This report was originally published in gaurilankeshnews.com 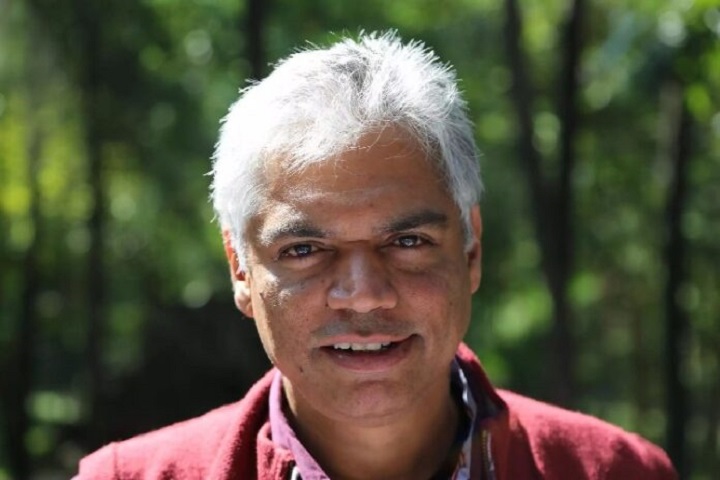 In a Facebook post after BJP’s defeat in Bengal, Belawadi uses inflammatory language portraying Muslims as ‘the others’ and responsible for the post poll violence in West Bengal. The post also justifies the 2002 Gujarat Pogrom. There also exists the ‘pride’ of huge revenge being taken in the aftermath the Godhra incident on the lines of his predictions.

Prakash Belawadi, known as a theatre artist in Karnataka, is known across the country and internationally for his movies. He has acted in several Hindi movies including Madaras Cafe, Airlift, Meri Pyari Bindu, Sanju, Thackeray, Saaho, The Tashkent Files, Made in China and Shakuntala Devi amongst others. He is also popular in South Indian film circuit for his roles in several Tamil, Telugu and Malayalam movies. He has on many earlier occasions aroused controversies.

His post indirectly supports the Sangh Parivar’s revenge against the Minorities. Though he has always been a staunch supporter of the BJP, use of such language similar to the twitter trolls and Bajrang Dal goons surprised many.

Prakash Belawadi is also predicting that pogrom like the Gujarat Massacre would take place in Bengal. Since the Facebook post was written in English, the Right-wingers and BJP supporters are sharing it not just in Karnataka but across all states. 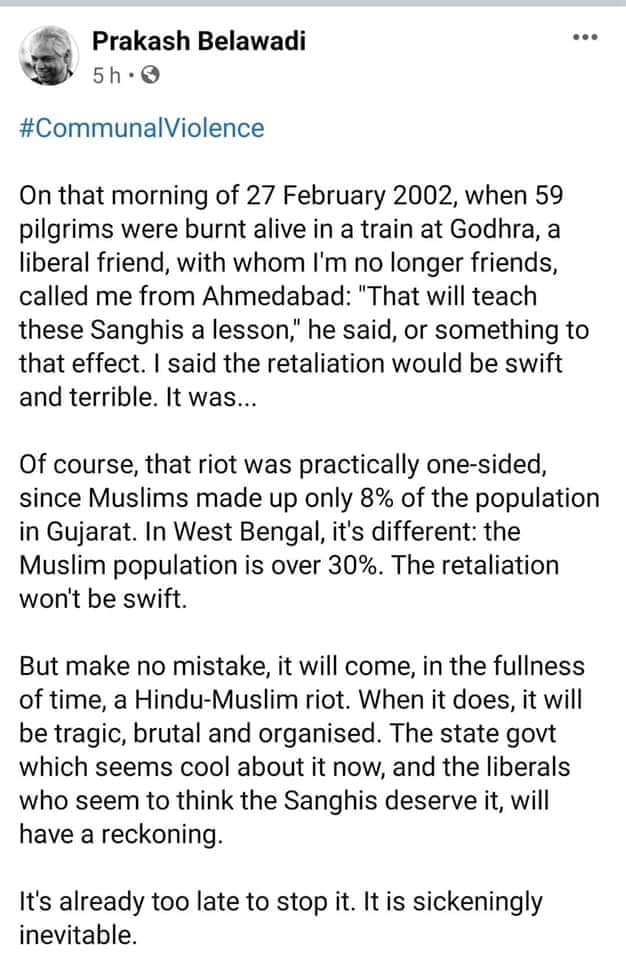 “On that morning of 27 February 2002, when a 59 pilgrims were burnt alive in a train at Godhra, a liberal friend, with whom I’m no longer friends, called me from Ahmedabad. of my liberal stance – now no longer with him – phoned from Ahmedabad: “That will teach these Sanghis a lesson” he said, or something to that effect. I said the retaliation would be swift and terrible. It was..

Of course, that riot was practically one-sided, since  Muslims made up only 8% of the population in Gujarat. In West Bengal, it’s different: the Muslim population is over 30%. The retalliation won’t be swift.

But make no mistake, it will come, in the fullness of time, a Hindu-Muslim riot. When it does, it will be tragic, brutal and organized. The state govt which seems cool about it now, and all the liberals who seem to think the Sanghis deserve it, will have a reckoning.

It’s already too late to stop it. It is sickeningly inevitable.”

Prakash is preparing the theatre performance of Kannada writer SL Bhairappa’s novel ‘Parva’. The one crore budget for the play was sanctioned by the state BJP govt.

This post by Prakash Belavadi is in sync with the one usually made by BJP’s IT Cell and its supporters, who are now campaigning for the enforcement of presidential rule in Bengal under the hashtag “#PresidentRuleinBengal’.

There has been widespread outrage over the post on Facebook and other social media platforms. “While his previous posts were also on similar lines, he had refrained from writing like Sangh Parivar. This Belawadi has shown his real face now. He has now de-activated his profile.” wrote Sharat Chandra on his Facebook wall in reaction to the controversial post. Reactions to this post have criticized the Prakash Belawadi’s mindset that adheres to ‘Sangha Parivar’ ideologies.

Speaking about the issue to GauriLankeshNews.com, Kannada Actor Chetan Ahimsa said “I haven’t read the post. I have heard about the summary of it. I will not be able to respond to the post. Belvadi does not score anything on rationality and lacks the perspective to understand society. Was all this needed in these times of Covid? It is better to neglect these posts that incite communal riots when lakhs of people are dying without getting beds and Oxygen at the hospital. We need to ensure that these things do not come to the forefront. Our efforts and concern now must be to resolve the Covid crisis…”

Writer and Playwright Hanumantha Haaligeri said ” Literature, theatre and Art must blend the thinking of people, add to the idea of humanness and enhance humanity. But it is regrettable that Prakash Belavadi, who has a background in theatre is spreading cruel and communal messages as he gets old instead of becoming more humane. The government has allocated Rs. 1 crore for their theatre performance of ‘Parva’. Granted. The novel, written by Bhairappa in his early days, lacks communal and casteist elements. But I have started to doubt that Belawadi might introduce communal elements in this play based on the novel” while speaking to GauriLankeshNews.com.

Many on social media have objected to it and have urged that Prakash deletes the same. “Now that the argument is going ad hominem, I’m going off FB for a few months. Bye,” he wrote before deleting the post.

VarthaBharati.in has reported that the actor disconnected the call when contacted to comment on the issue.