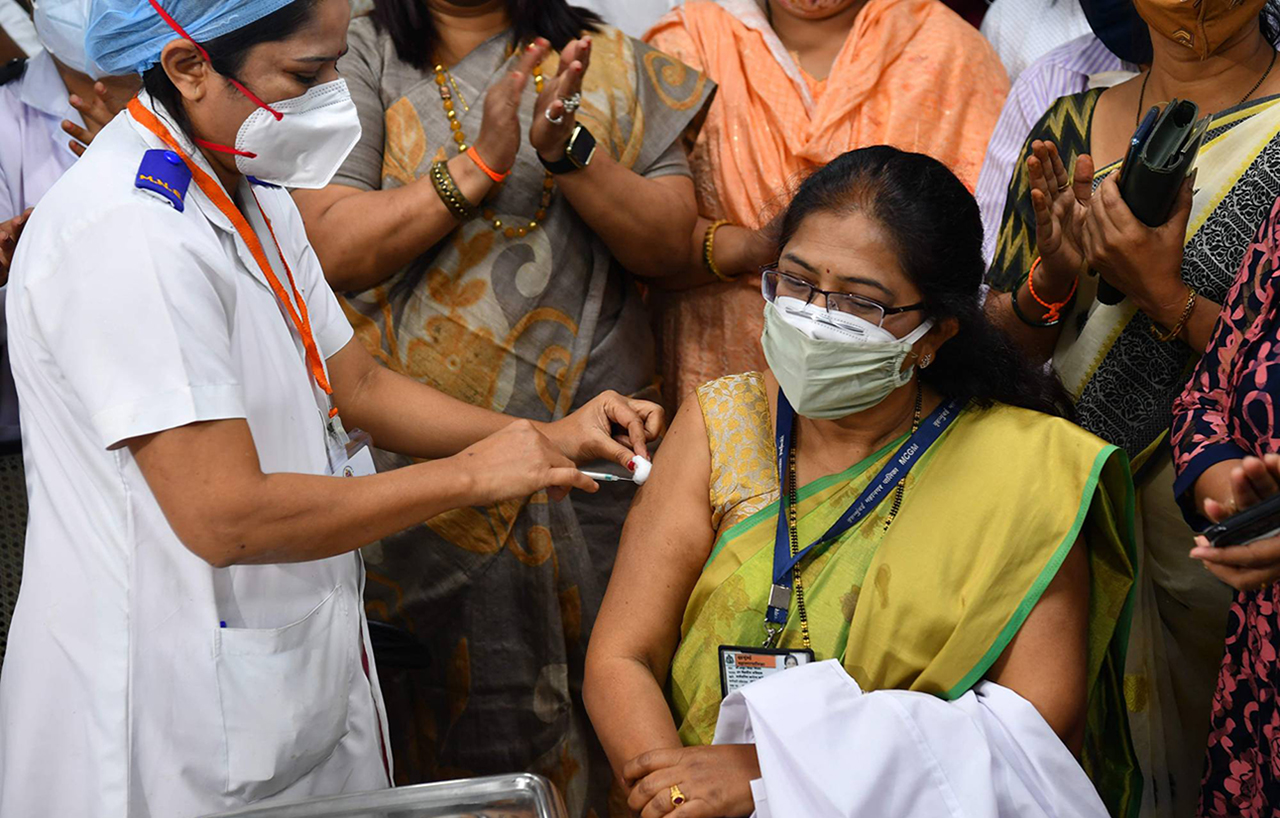 The Vaccine conundrum under neoliberalism

As late as January 2021, the Union health minister had promised that Covid 19 vaccines would be free for everybody. But the just announced price sheets for vaccines go back on the promise of free vaccines for all. Pocketing super profits after using public funds for production of vaccines, that too during a massive humanitarian crisis should not be legally permissible. Vaccines should be a universal right for all and not a communal or capitalistic trump card, writes Paroma Ray.

The vaccine production and distribution process has clearly revealed to us the entrenched imperial powers that directly and indirectly affect the life chances of all individuals as well as put up barriers to the real policy choices available to sovereign nations. The third world especially bears the brunt of the economic interests of the most developed nations, be it through being a source of cheap land and labor or being a test population for substandard products including healthcare products. The wealth of most developed nations have been and continue to be built on the backs of exploitation of the global working class yet the most vulnerable within this very class is treated just like any other replaceable machine-part. Reduced to a mere statistic, left to fend for themselves the moment they become incapacitated by the same parasitic system. As vaccines get pre-ordered through portfolio investments, despite diplomatic talks about equitable distribution, equity in healthcare has been systematically jeopardized. The portfolio investment allows countries to use their secure assets to invest in a multitude of vaccine trials that allows them to hedge bets better but also keeps fund management roles within the hands of each manufacturer.

The economic impact of the pandemic and lockdown, provided the impetus for quick vaccine production. In Q2 2020, the economy in the UK and Spain shrank by more than 20% year on year. Other leading economies saw similarly dramatic if smaller falls in that quarter (e.g. Germany -11.7%, USA -9.5%). Quick adjustments were made to the global system of privatized healthcare. As the financial risk of research for a Covid vaccine was too much for the pharmaceutical giants, public funding ensured that scientific research and innovation continued, to produce the much needed vaccine. Thus busting the myth that free market rather than steady and committed public investment promotes innovation and is the solution to public health crisis. The rationale for public spending on health and RnD infrastructure becomes evident every time a crisis emerges and yet, every time these lessons are forgotten quickly in favour of private profits for big pharmaceuticals.

Imperialism dictates whose life is worth saving

As of Feb 2021, WHO in relation to its vaccination efforts in Africa noted that there was a deficit of 27 billion dollars in meeting vaccination and testing targets. Funds for which hasn’t been arranged yet, alongside a 40% increase in death rates in Africa. Distribution of vaccines amongst countries happen on the basis of portfolio investments and pre orders. A total number of vaccines amounting to half of the production capacity of the three major covid vaccine manufacturers has already been pre ordered by the G20 countries. The total population of these countries that have pre ordered the vaccine amounts to 13% of the global population, negotiations for more doses have also taken place the details of which haven’t been made public. While stocking up vaccines, countries like Canada have ordered up to 9 doses per citizen, UK up to 5 doses per citizen, the margin has been kept in case of vaccine wastage but this strategy while benefiting the citizens of the richest countries will precipitate the problem of vaccine shortages in developing countries. Even within developed countries vaccine distribution hasn’t been equitable.

Vaccination in sub Saharan Africa is lower than that of New Jersey. WHO also released that 80% of vaccines produced so far have been used by High income countries. In its arrogance American government suggests that saving American lives will lead to saving lives globally. Through a trade protectionism regime for developed countries and free market exploitation for developing countries; the supply of essential raw materials for the vaccine continue to be in the sovereign hands of the American government. The same sovereignty that was taken away from developing countries when privatization of healthcare was pushed onto them by global financial powers through the Bretton Woods system.

International efforts like COVAX Joint Fund (upfront payment by top economies allowed them first grab at vaccines for their vulnerable populations while reserving 1 billion of the 2 billion doses for the low income countries) acts only like a bandaid, despite having 80+ contributing states the fund has so far secured about 700 million vaccines and has the potential for vaccinating only about 20% of the world population by the end of 2021. These face saving efforts put up a façade of international cooperation while the richest countries continue to lobby for harmful legislation like expansion of patenting laws for essential medications, vaccines and lifesaving equipment.

The current shortage of vaccines and the proposals for liberalizing vaccine sale from May 2020 is a fallout of both the systemic logic of capitalism as well as the demagogic ideologies of the current government. Both capitalist and communal forces work to create a gradation of human lives across those who are worth being saved and those who aren’t. Over the past few decades India has normalized privatization of healthcare. Lifesaving vaccines which were once completely the responsibility of the state will now be distributed at varied prices by private firms. Calls for strengthening public healthcare are met with contempt, and after decades of neglect when public systems fail, they are sold to private players. Today we function more as consumers and less as citizens even though citizenship continues to be used ideologically as a sword for political gimmicks.

Currently only about 1.5% of the total population has received the second dose. Despite the fact that the vaccines were produced by funds from different governments, the manufacturers will be able to quote different prices for different states (as per parameters designed by individual manufacturers) as vaccine scarcity increases and without a cap on prices this could also lead to massively inflated prices as states try to outbid each other. The differential pricing for central and state governments also has no logical reasoning behind it, except the potential for super profits that the firms stand to make.

The Modi government’s vaccine policies will further function as political trump cards by affecting the state government’s capacity to provide free vaccines to their residents. Free vaccines instead of being a right are treated as electoral gifts to be given only if electorates vote BJP to power. Despite Modi’s posturing as an international leader, USA has decided to put its own interest first by refusing to sell vaccine raw materials to India or even distribute the additional 35 million doses it has to countries in greater need. Germany also stated that it allowed India to become pharma giant and will reverse that situation if India doesn’t meet Germany’s vaccine demands. India’s vaccine production depends on the import of certain raw materials like bioreactor bags, filters, micro carriers etc. from the USA. National defense protocols in the USA prevent the export of these essential goods in times of crisis. This leads to an effective ban on materials without which vaccine production in India can come to a halt. Delay in vaccine production and distribution will be one of the causes for the predicted rise in infection cases that is due to hit India in mid-May.

As late as January 2021, the Union health minister had promised that Covid 19 vaccines would be free for everybody. Rs 35000 crore was set aside precisely for this purpose. Citizens must demand accountability from the government. Furthermore an advance payment of Rs. 30000 crore was given to SIL to enable smooth production and equitable access to vaccines. Yet, the newly announced price sheets for vaccines go back on the promise of free vaccines for all. Pocketing super profits after using public funds for production of vaccines, that too during a massive humanitarian crisis should not be legally permissible. Vaccines should be a universal right for all and not a communal or capitalistic trump card.

What do we want?

Human lives continue to be reduced to their economic values while Big Pharma eagerly waits to turn the pandemic into a source for ‘super profit’ with the help of global legal instruments like TRIPS (countries like India and South Africa continues to push against patenting of generic medicine while developed countries are lobbying to patent Covid vaccines), and tried and tested economic measures of global manipulation like embargos. It is imperative to demand for not just Free Vaccines for all but also dismantling of the global patenting rules and regulations that work towards making healthcare unaffordable to all in the name of encouraging innovation. Moving forward the nation’s priority should be strengthening public healthcare infrastructure and scientific research. There is also a need for us to re-evaluate how we view ourselves; do we see ourselves as fragmented individuals and consumers? Or do we see ourselves as a part of a larger humanity that deserves the right to be treated with dignity.

The author is a Phd researcher at Delhi University.