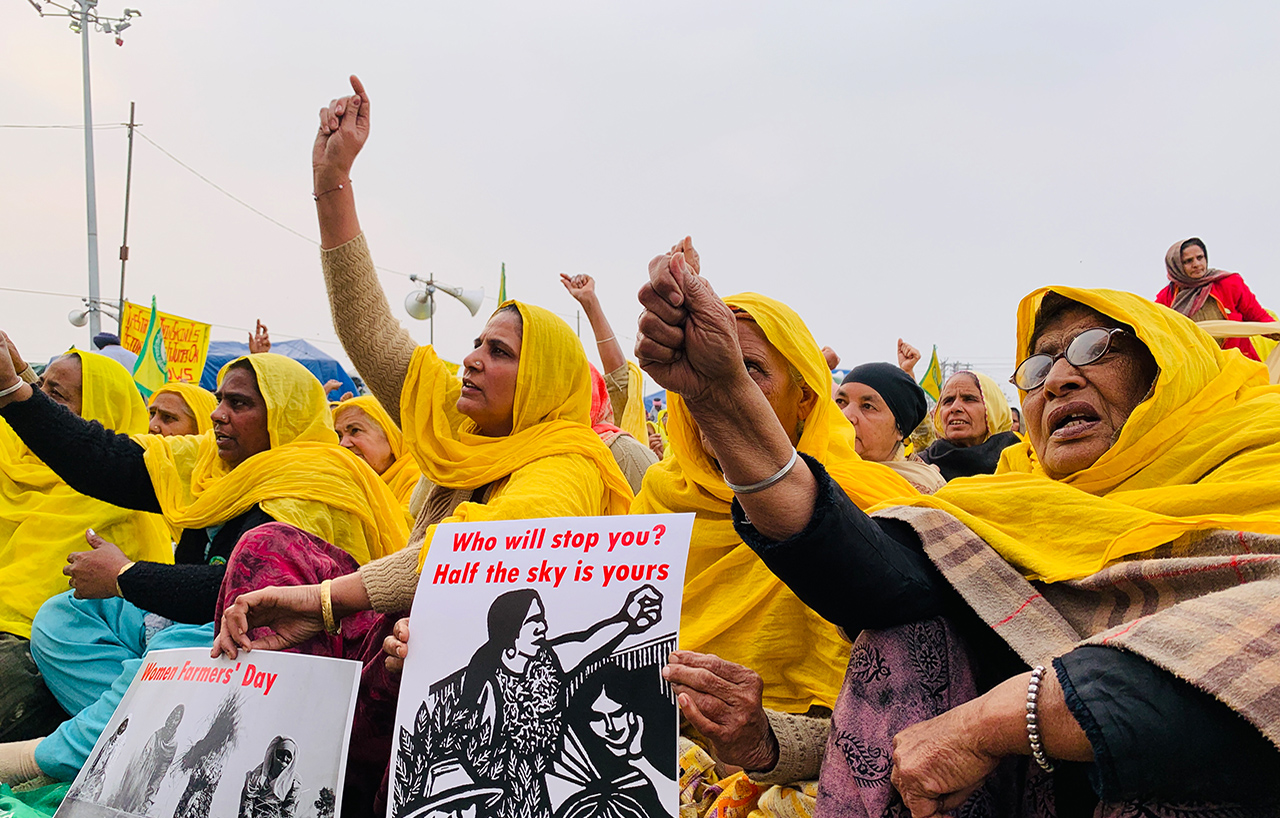 The continuing farmers’ protests on the borders of the national capital demanding the repeal of the three Farm Acts have been hailed as the most valiant resistance. However, it is the large participation of women that seems to be most unprecedented. And as history has shown, once women put their stakes in the struggle, resistance becomes formidable. Even if women have stepped out temporarily from their homes and hearths en masse, the chemistry has changed forever, writes Ranjana Padhi.

“Tu is aanchal ka ek parcham bana leti to achha thaa…”  Majaz’s inspiring lines have come true: Tens of thousands of women from Punjab in their mesmerizing Basanti chunris are in the protest, just as in the winter of 2019-20 veiled women held siege at Shaheen Bagh in South Delhi.

The continuing farmers’ protests on the borders of the national capital demanding the repeal of the three Farm Acts have been hailed as the most valiant resistance. However, it is the large participation of women that seems to be most unprecedented.

The ordinances being passed by the BJP-led majority government sans any parliamentary opposition have made ordinary women leave the confines of the four walls to hit the roads.

More importantly, women’s messages are becoming sharper each time. This is evident in their rebutting the Supreme Court questioning on January 11, why women are “kept” in these protests and that they should be “persuaded” to return, and in their assertions on stage, in hundreds of interviews, behind cameras and the media, nationally and, internationally.

It is tough to surmise simplistically who these women are, what drives them to protest, and exactly when the spark of resistance lit within to reach Singhu or Tikri.  But now, they are in protest and they spread much energy and adrenaline.

Agrarian unrest has been brewing in Punjab since almost three decades, but women have been joining in slowly. The BKU-Ekta (Ugrahan) has been organizing both women and youth. There were few women organizers; yet, domestic discord and hardships within the familial world compounded in rural Punjab as social relations were torn asunder by agrarian distress.

While interacting closely in the Malwa region some years back with women surviving suicides of husbands, sons and brothers, I had spoken to their General Secretary Sukhdev Singh Kokri from Moga. He had said then that in organizing the peasantry, it becomes imperative for the union to address issues of declining sex ratio, drug addiction, and violence against women. And they did.

Through cultural programmes, the union made efforts to usher in consciousness and make sense of myriad social processes impinging upon the lived reality of peasant life. These years of hard work seem to have paid well as the number of women organizers has exponentially grown.

Harinder Bindu, president of the women’s wing of the BKU-Ekta (Ugrahan) said that they have at least 150 women organizers planning meetings at village, block and district levels. “There is a big change. Women’s confinement within the house and the responsibility of household work is not a problem in these protests”, she said when asked about visible changes in rural households.

“Husbands and other family members are sharing household chores like cooking, etc. Relationships within the family are improving. The unease male family members had of women stepping out or mixing with strangers has lessened in this period”, she added. “Our struggle is for women’s equality within the family setup as well as in land rights and employment. But this struggle has to also fight caste superiority”, she said.

Women’s experiences across the protest:

A long and tedious debate among academics and among peasant organizations has been given a joyous burial: whether women are seen as farmers or as farmers’ wives. At last, the verdict lies in the claim of an identity, long overdue, of  ‘women farmers’. Women joined in thousands; women drove in to the nation’s capital the tractors they used back home. Thus there are major paradigm shifts happening at all protest sites on the borders of Delhi.

On December 16 2020, hundreds of women held up photos of male kin who had committed suicide. However, they are not mere widows or victims.

The Mahila Kisan Divas was organized on January 18 as women marched in dignity demanding the repeal of the three Farm Laws.

Finally, thousands of women from Punjab, Haryana and UP marched and danced celebrating International Women’s Day. The bonding of Punjab women with women from Haryana and UP was electric. The collective strength of women was demonstrated loud and clear.  It is not only the Malwa region; there are also women from the Majha and Doaba regions.

A group of women at the Singhu border narrated how they were drawn into the protests impulsively.

Ravinder Kaur recalled how she packed her bag in a clandestine manner and then announced to the family that she was leaving for Delhi. “Our lives are mired in drudgery from 4 am to 11pm. But there is nothing natural about it. No one recognizes our labour. Here we are gathering strength from each other while demanding repeal of the farm laws”, she said.

Amandeep Kaur quietly shared how she was on an auto going to the Golden Temple and from there joined a group of women headed for the Amritsar railway station on their way to Delhi. She came with nothing on her. She said, “I always wanted to come to Delhi but this came as a call from the one above.  I had to join the protest.”

She informed her mother after she reached through Joginder Kaur, who has been mobilizing women from Amritsar district since December.  Joginder Kaur explained how many women have become part of the protests by coming on their own also or by word of mouth. Once they reach, they become part of the larger collective and live together in tents and trolleys.

Attending large meetings collectively have helped women unravel the implications of the three Farm Acts for their cherished land.

Kashmir Kaur who has 2 acres of land leased out said that the yield is sufficient to feed her, her daughter and mother-in-law. Her husband and son have died.

She said that they will be left with nothing if even this land is forfeited. She wanted to know what future PM Modi has for her daughter when he announces Beti Bachao, Beti Padhao campaigns.

As everywhere else, women’s participation is both organized and spontaneous.

The long road ahead

Political participation of women is one major catalyst in the long struggle against the oppression of patriarchy and caste, which is otherwise arduous, endless, and daily.

Harinder Bindu said that Dalit women are yet to join in larger numbers as the obstacles faced by Dalit women from both local administration and big zamindars are aplenty even if they are relatively freer than Jat Sikh women within the family and community.

“In 2016, Dalit women had faced police repression when they had protested against the abduction and rape of a Dalit woman in Muktsar, the Chief Minister’s own constituency”, she recalled.

The sense of belonging to Punjab is not based on its geographical entity or location. The affinity to the land comes from a deeper belief that fosters and nurtures community support and collective ethos, irrespective of the graded inequalities within the socio-economic order, be it dalits or youth, women or landless.

Elderly women volunteers in Tikri said how they take turns in coming as they see themselves as doing “sewa” and what they distribute is “prasad” in the community kitchens.  That seems to be strengthening their sense of resistance.

“We are the Laxmibais of the modern era. We can sit here another 10 years, if required”, said Karamjeet Kaur at Singhu. “Langars have been going on for more than 500 years. These langars will never stop. Guru Nanak wills us to be all inclusive, that is our strength”, she added.

Women have always had to struggle against oppression and exploitation within and without – be it the family and organization or the misogynist society at large.

Within this protest, young women are speaking up against sexual harassment in Swaraj Abhiyan, Trolley Times and SFS even as they are being trolled by the right-wing on social media. Their courage and conviction emerges from the spirit of resistance that has gripped the entire Punjab.

Peasant organizations held siege at the Dry Ports of the Adani group at Qila Raipur in Ludhiana district from March 27 to 31. The BKU-Ekta Ugrahan leader Sukhdev Singh Kokri explained how the momentum had been building, “We have been working non-stop since the time the ordinances were announced in June. The protests within Punjab grew each day. Consciousness raising is the biggest strength underlying these protests. We have been at it since long, however slow and painstaking the process might be. Today, within Punjab, there are protests in every block and district, in universities and on toll plazas. As you can see, the number of women and young girls is increasing.”

Speaking to the Workers’ Unity channel, Prof. Surinder Kaur from Jamoori Kisan Morcha, which is part of the Samyukta Kisan Morcha coalition, said women form the backbone of these protests.

“Women have been struggling within the house as agrarian distress was bearing down on the rural household economy. These three Farm Acts have brought in the realization that the hearths they struggled daily to keep burning may go cold. They have been quick to understand and act in unison”, she said.

“Being consumers and sellers of labour power only, these Farm Acts will wipe out the Dalits, landless and agricultural poor. It is still a big challenge to increase participation of dalits in these protests. It is the protest site where ideas and actions need to germinate for the future vision of the entire society. To take resistance forward, we are tackling complex questions about inclusion of all exploited sections. But our strength lies in our legacy and in our history where resistance is the only way”, she remarked.

The ongoing farmers’ protests amply demonstrate that the peasantry is an entire community: women, men, elderly and the youth. And it is a collective struggle of food producers, landed or landless. There is no individual producer that state and capital can buy in trickery or in appeasement. And as history has shown, once women put their stakes in the struggle, resistance becomes formidable. Even if women have stepped out temporarily from their homes and hearths en masse, the chemistry has changed forever.

There’s a surge of consciousness and awareness spreading like wildfire from villages to districts and from states to the borders of New Delhi.

Ranjana Padhi is based in Bhubaneswar, Odisha. She has authored Those who did not die: Impact of the Agrarian Crisis on women in Punjab (Sage, 2012) and co-authored Resisting Dispossession: The Odisha Story (Aakar Books, Palgrave Macmillan, 2020).