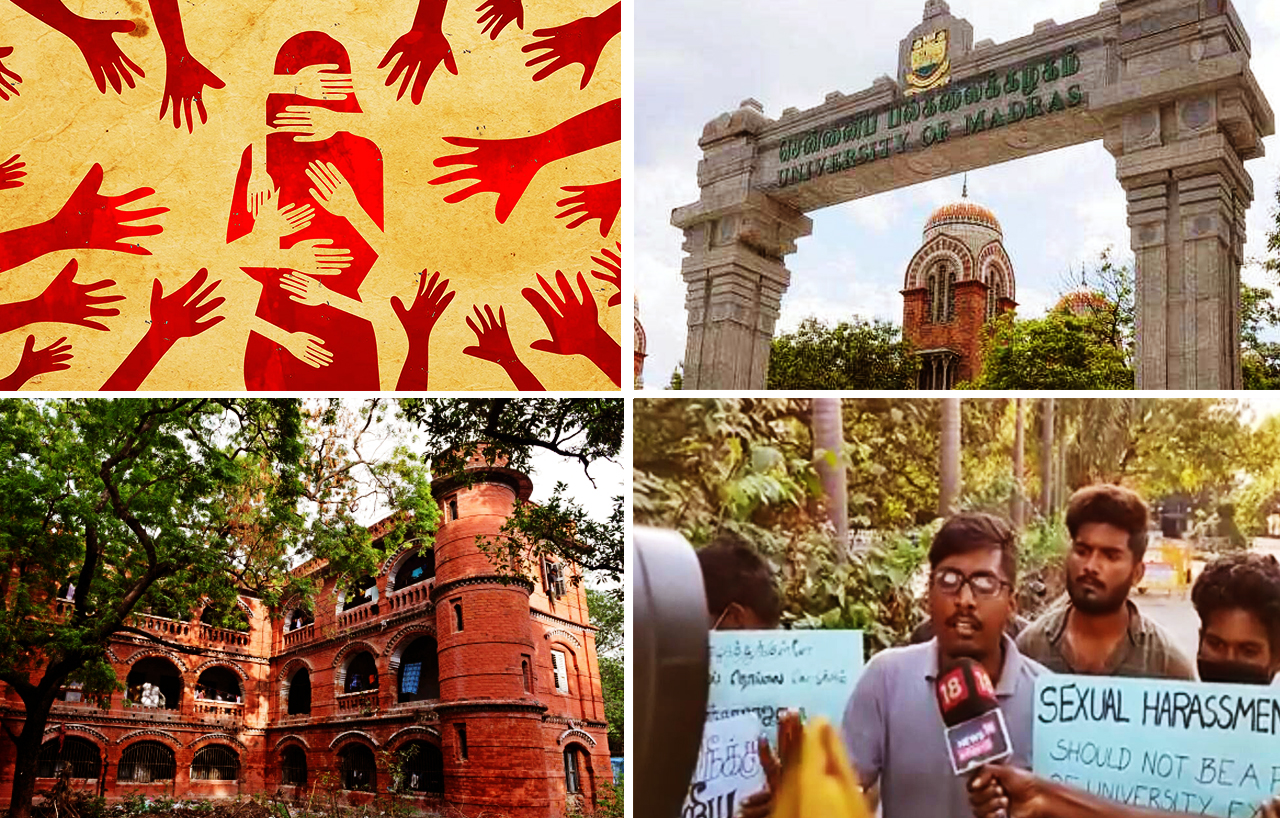 CPDR-TN condemns the atrocious behaviour of Mr. Soundararajan for his intimidation and attempted molestation of the female student of his department.

Madras University students are facing shocking vindictiveness from the administration as a penalization for protesting against excess hostel fee. Not only attempts were made to detain the protesting students in their last semester, the HoD of the Department of History and Archaeology, Mr. Soundararajan verbally and physically abused them and physically molested several woman students. In a bizarre turn of events, the members of Madras University ‘Committee on Sexual Harassment of Women sided with the administration and one member Mr. Hussein even made the following comment about the victim of molestation: “The student should not complain about such petty issues when she can sleep with ten male students in the hostel”. Committee for Protection of Democratic Rights (CPDR) TN demands immediate action against the offenders. The following is the statement issued by CPDR:

During the Corona pandemic days, the Madras University students were asked to pay for the eight months hostel mess fees. This evoked strong protest from the students, and they had to resort to protest action against this. Later this was sorted out after negotiating with the University Registrar. It was assured at that time that no vindictive action would be taken against the students. However, when the department announced the results, it was found that eight students, who had participated in the protest action, were detained in their 3rd term examination.

After this, the students went and appealed to the erstwhile Assistant Professor of History and Archaeology and the current HoD, Shri. Soundararajan. The students were then informed that their answers sheets were missing. Shocked over this, the students again went on agitation and appealed to the Registrar and insisted that an independent examiner should reevaluate their answer sheets. After this, on 16/3/2021, these eight students were orally declared to have passed the exam.

Angered by such a flip flop and utter lack of transparency, the students met with the Head of the Department (HOD) Mr. Soundarajan, on the same day (16/3/2021), to know their marks officially and to get their results displayed on the university notice board. To their surprise, the HOD did not agree to announce this on the University notice board. Mr. Soundararajan not only made an outright rejection of their appeal in a thoroughly unprofessional manner but also hurled abuses and shouted at the students. However, the students stood their ground and continued with their demand for an official announcement of their results.

This led to a confrontation where Mr. Soundararajan pushed the students physically. He shoved one male student against a wall and had touched one student on her breast. When the women students opposed this thug-like behaviour by the head of the department, he pushed them and touched their breasts. When one of the women students resisted this, he intentionally pressed her breasts once again and left for the Registrar’s office. None of the students left his office room for an hour, insisting that he apologise for his behaviour. However, no apology was tendered.

Some of the students went to the D1 police station to file a police complaint, but they were directed to the D6 police station on the pretext of jurisdictional limits. At the D6 police station, students were advised to take it up with the university authorities. Students then approached the Registrar to lodge a complaint which was handed over to the Madras University’s Committee Against Sexual Harassment on Women on 17/3/2021. Members of this Committee are Dr. Rita John, Adv. Santhakumari, Prof. Sheikh Mohammed Hussein, Assistant Professor Sasikala, Sampoorani, the Dy. Registrar, Sujatho, a section officer and the lone woman student representative, Uma Maheswari.

The affected woman student, whom Mr. Soundarajan had molested, got a notice from the Committee to appear before them on 18/3/2021 at 3.30 pm. She was asked to attend it alone. However, the notice was received by the student on 18/3/2021 at 3.35 pm after the scheduled time of the meeting! The notice had also mentioned that a complaint had been registered with the Committee on 16/3/2021 by the HoD against the students.

Additionally, we have learnt that the Committee’s approach towards the issue was very unprofessional even during the conduct of the enquiry and they heard only two out of the four witnesses. Rather shockingly, one of the committee members Prof. Hussein, quipped at the complainant in vulgar terms mocking that “The student should not complain about such petty issues when she can sleep with ten male students in the hostel”. CPDR-TN has learnt that none of the committee members or the chairperson objected to this extreme vulgarity by a faculty member. The complainant, who was subjected to this abuse during the meeting, was left shocked and depressed. Students gave a representation to the Vice-Chancellor on 19/3/2021 demanding that Prof. Hussein’s conduct be enquired by the ‘Committee on Sexual Harassment of Women’. On 20/3/2021, the five students, including the victim of sexual harassment, received the suspension order at around 8.30 pm from the University. The female student got depressed upon this and attempted suicide by cutting her veins on her left hand on the 21/3/2021 morning at around 8.30 am. She left a note that Mr. Soundararajan is solely responsible for her mental agony and suicide.

Still, no action on Prof. Soundararajan is forthcoming. Five students, including the one who the HOD sexually harassed, remain suspended by the University. Police Inspector Seetharaman forcibly removed the students, including the affected students, who were on sit-in strike from 17/3/2021. The Registrar is solely responsible for the police action as he had allowed the police within University premises. He had, on earlier occasions, also allowed the police within the University premises (something he has done before on several events such as the peaceful anti-CAA protests done by University students) and let them arrest the students. The systemic injustices did not end here as the students and women who protested police action and came in solidarity for the University students were brutally lathi-charged by the police force headed by Inspector Seetharaman. Even at the time of writing this notice, the enquiry committee report is not handed over to the affected student.

This case displays everything rotten in the Madras University system and the issues that are at stake for students. One of the core issues at stake is the system of examination and evaluation method, which is solely in the university faculty members and administration’s hands. Anyone can arbitrarily be failed or passed, and their answer sheets can even go missing without any repercussion. It is a shocking collapse of the very fundamentals on which a functioning university is based. This lack of professional handling and absence of transparency with an examination system, which is a core component of the University’s functioning and on which students’ life and career depend, has clearly brought down Madras University’s credibility and have raised serious questions on its functioning.

The present case once again highlights that there is no proper procedure to record, register and dispose of the complaints from the students regarding a myriad of problems they face in departments and universities. There is no procedure to receive complaints of harassment and vendetta practices by faculty members who abuse their power and which any student can be subjected to at any time.

Through their studied silence on the faculty’s unethical practices, the Registrar and the Vice-Chancellor are equally guilty in this collective crime against students. We strongly condemn the anti-students practices of the university administration.

The legitimate complaints (such as against hostel fee hike) and the subsequent struggles for the corrective measures are being put-down by the university authorities in connivance with those with vested interests who have no regards for the University’s role as the higher abode of learning. The use of police force inside the campus as a means to silence the protesting students also speak volumes of the university administration’s real intentions.

CPDR demands that the Pro-Chancellor intervene immediately to stem this rot. There is a need to constitute a commission comprised of renowned legal luminaries and noted educationalists that can suggest methods to revamp the university system completely.