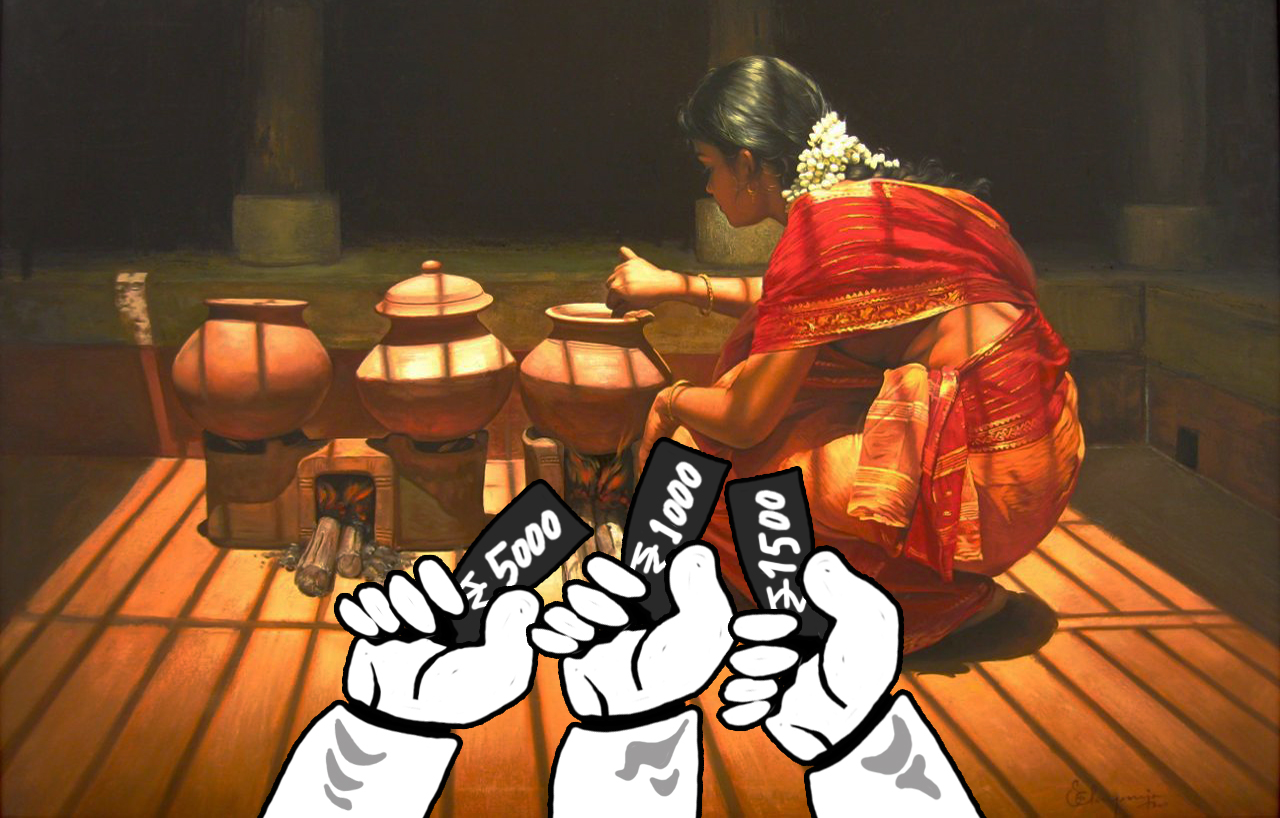 Prior to the upcoming election, several political parties have promised salary for homemakers in Tamilnadu and Kerala. While some oppose and some welcome these proposals, trade union activists Munmun Biswas and Arya Thomas ask what they really stand for.

The southern states going into election this year have confronted a new battle. In wanting to woo a large number of women voters, whose voting patterns have shown more variations  recently, have declared special pensions and wages for homemakers/housewives, which Kamal Haasan’s Makkal Needhi Maiam (MNM) recently declared, a ‘value rights aid’ for homemakers/housewives. After Kamal Haasan’s MNM’s first declaration in January, other political parties such as AIADMK and DMK has issued a promise of 1500/- and 1000/- respectively for homemakers. Just more recently, the LDF in Kerala, too, has hopped onto the bandwagon by declaring in their manifesto a pension for homemakers. While many have made a welcome note to such initiatives by these parties, there have been exceptions like Kangana Ranaut, who opposed it on grounds of a celebration of a ‘traditional value’ of housework. Some others have been critical and skeptical, for such wages might further institutionalise domestic work as women’s work, as well as raise questions of sourcing funds, and whether men can apply for the same and so on. Women’s groups like AIDWA welcome this initiative as a recognition and value of a historically invisibilised value of household labour.

But we must ask ‘for what?’ Is it a reward for making the home a comfortable place for men, and other members? Or should it be accounted for the ‘wage of domestic work’? If yes to the first one, then we must say, such a measure contributes towards a glorification of motherhood, and putting all the burden of responsibility only on women. If yes to the second, then it is too meagre an amount for such an unlimited amount of cooking-cleaning-child rearing-caregiving work. Isn’t it too ironic that the amounts mentioned are not even close to the minimum wages in the country or these states? Or, as one must ask, is it just another way for politics of dole?

Yes, it is of course, important to recognize the contribution of unpaid household work done by women in producing the surplus value for the capitalist class. Since even mainstream economics is yet to recognize household work as productive to capital, developing certain metrics to account for the former, remains an important demand. It is because of women’s household work that the sustainable wages can be kept so low. We all know how value is produced by household labour, by domestic work and care work. In creating able, productive worker citizens, women’s labour has been  integral to capitalist expansion and economy.

This is also true in light of the informal sector, where an entire family’s collective labour leads to wages for one member. In the agricultural sector, too, women’s work is much more extended from household chores to income generating or expenditure saving work. This is apart from how domestic work itself has evolved to be a profession today, marking global migration streams and as a source of remittance income in many countries of the global south.

In India, a serious discussion had surfaced when in 2012, the UPA was mulling over the introduction of a Bill that would mandate husbands to pay 10-20% of their incomes to ‘home engineers’ as part of the efforts to recognize all jobs within the domestic sphere. Thankfully, the criticisms and outrage by women’s groups led to the stalling of such an attempt at ‘recognizing’ women’s household work. With debates and promises of a Universal Basic Income, such initiatives are gaining more currency, especially when the actual reality in this capitalist economy is this, no longer large-scale employment would be generated to cater to the majority. Since providing living wages is the most non-profitable part of capital, it seeks to de-legitimise most people from the right to be employed, either by dislodging them from citizenship, or excluding women from workforce participation rate. Therefore, what is of concern is the normalization of the domestic work as women’s work.

There is obviously one aspect  — that is to provide recognition, respect and dignity to invisibilised labour. On the other hand, if such labour is institutionalized, then it leads to a kind of valourisation of women’s work within the domestic sphere. The strict sexual division of labour in the heterosexual family is prevailing everywhere in our country. That is why, only 20.3% of women are participating in the workforce compared to more than 76% of male in the same country (2020 figures). Is it not mostly because women are entitled to be subordinated with monotonous/ unshared/ 24 hours of household work? Why would women do that uninterruptedly? Why would men not share equal amount of cooking-cleaning-child rearing? What about socializing household labour? What about the task of the government to ensure dignified employment for women? Real recognition and dignity comes with the delinking of women’s identity with domestic labour, and attributing socio-economic value to domestic work per se. How about valuing care work as a social necessity, transforming them into institutional mechanisms, which can de-link the family (read women) from the very idea of care work?

Today, with the state withdrawal from social security measures and welfare, and the inroads made by the private sector, has led to more stratification. Families and working women, who can afford to hire domestic workers, outsource it to working class women, while working class and lower middle-class families bear the risks of this non-dignified work and has to carry the burden completely on their own. Neither the central nor the state governments are interested in recognizing the lower class ‘maids’ as workers and providing them with the security of minimum wage, pension and the right to unionize.  Are they not also the homemakers for upper (middle) class families? Do they not need to be recognized?

Feature image based on a painting by S. Illayaraja.