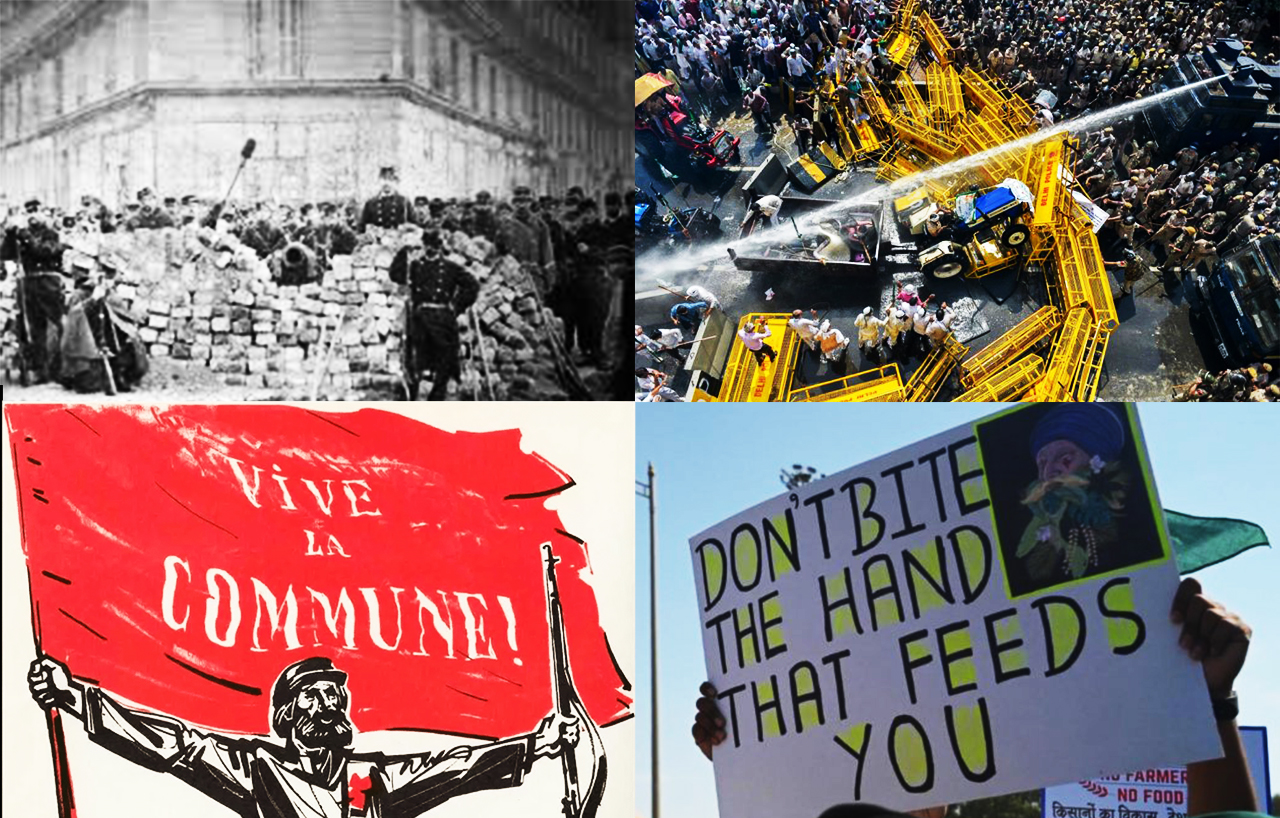 Celebrating 150 years of Paris Commune at borders of Delhi

Revisiting the Paris Commune on its 150th anniversary in the view of the ongoing farmers’ movement in India.

A Hundred and Fifty years ago, on March 18th 1871, workers and toiling masses of Paris, tired of a war, unemployment, rising prices and debts to landlords and capitalists  took over Paris (the capital of France), tried to abolish the oppressive and feudal structures and create a socialist world out of it. The Paris Commune as it is called created history as for a brief moment the workers of Paris destroyed the old world and created a new and just world out of its ruins. Although the Commune was crushed by French army in a violent attack between May 21-May28, (an attack in which close to 50,000 workers laid their lives and Thousands were imprisoned), it gave a glimpse of what would happen if the working masses took complete control of their own lives, livelihood and land.

In two short months of its life, many remarkable things emerged in Paris commune. All the factories which were left for ruin by their owners were run by the workers themselves! All the small peasants and shopkeepers who were reeling under heavy debts from landowners and businessmen were cancelled. Shopowners who could not make any money during the war with Germany even had the rents of their shop suspended. Paris Commune launched free education scheme for all and abolished the concept of overtime in any factory. There was no singular leader on Paris Commune and the Paris government (known as national assembly) was taken over by genuine people’s representatives. Paris commune, being a space for all working masses knew of no national boundaries either as one of the primary members of the assembly, comrade Jabrowski was a Polish activist who was in charge of resistance against the French Army. Jabrowski died fighting the French army of landlords and capitalists during the gruesome May week.

Paris Commune had no police and no army. But police was replaced by ordinary people protecting themselves and the army was replaced by workers fighting to save the commune. The wages of everyone living in Paris at that time, from workers to members of the national assembly were equalised legally. All the initiatives were borne out of collective minds of the working masses who envisioned a world without poverty, discrimination and economic slavery to the state and the rich!

The Paris commune’s initiative to cancel debts of small shop owners and peasantry should have drawn farmers from all over the country to join the commune. This could not happen as the French government laid a siege to Paris and blocked all routes from French villages to Paris. For over a Hundred years, people across generations have wondered about what would have happened if the workers and peasants not just of Paris but of whole France had joined the revolution.

As the world evolved from agrarian economy to manufacturing industries and finally to increasing informalisation and service sector-based employment, we continued to wonder if Paris Commune could be repeated anywhere in the world!

This part of the history written by the workers has now found an echo in India precisely after 150 years! However, the architects of the present movement are not workers of Paris but farmers of India. Having occupied and created living spaces for over a Hundred days on borders of Delhi, the Millions of farmers are giving the entire world a glimpse into what a world may shape into, if it was governed by the same people who created it.

Surely, The farmers’ movement and the Paris Commune are not the same. The uprising of workers of Paris in 1871 was followed with a direct destruction of the capitalist and feudal structures. Paris workers did not simply demand that some laws be repealed but took over the factories and made their own laws! The farmers’ movement today is not contesting the very foundations of capitalist state as it recognises the state authority as legitimate. But the many possibilities of political and social transformations that the commune developed simmers in the farmers’ movement we see today.

And there is much in common between the commune and the current farmers’ movement. The Protest sites have become living spaces with its own governance, health facilities, libraries and equal access to food (distributed through Langar) and water for all. There is no singular leader but the national assembly of Paris commune is replaced by a joint front of many farmers’ unions. There are no police in these sites as all the “policing work” is done by farmers themselves.

People in Paris commune had a vision, that by cancelling debts of the farmers they could draw farmers from all over the country towards the commune but as this did not happen, the commune was crushed. As an ironical twist in the history, it is now the farmers of India who are willing to lead the workers into a joint struggle against capitalism and fascism.

Over the last 30 years, it is not only the peasantry but the working class in India which has seen unimaginable devastation due to government’s policies inspired by the big capitalists of India and international finance capital. Gone are the days where workers dreamt of a dignified permanent work in manufacturing industries.  The only thing permanent now is that their jobs are contractual and informal. Dream of dignified employment has been replaced by a nightmare of unemployment and humiliating informal unskilled work. Workers have lost their rights. Unions that actually fight for the workers are being decimated all over the country. The new labour codes have even stripped a worker of their identity as anyone in the factory including a supervisor will now be called a worker! As the big unions in India degenerate into bureaucratic negotiating bodies, it is the farmers’ movement which has set the stage from which the workers can take the capitalists head on.

The Paris Commune was one of the glorious movements in the history of toiling people of this world and it failed because the working masses and peasantry did not unite. If the “Indian commune” created by farmers of Punjab, Haryana and Uttar Pradesh has to succeed, the peasantry and working class from all over India have to unite. And this unity will only begin in the present movement. It is only when the repeal of the farm laws is followed with demand for land for the landless farmers and repeal of the anti-worker labour laws that the world that workers of Paris created briefly will start emerging out of the farmers’ movement.

The article has been collectively written by several forums.

To read the article in Hindi:

To read the article in Tamil: