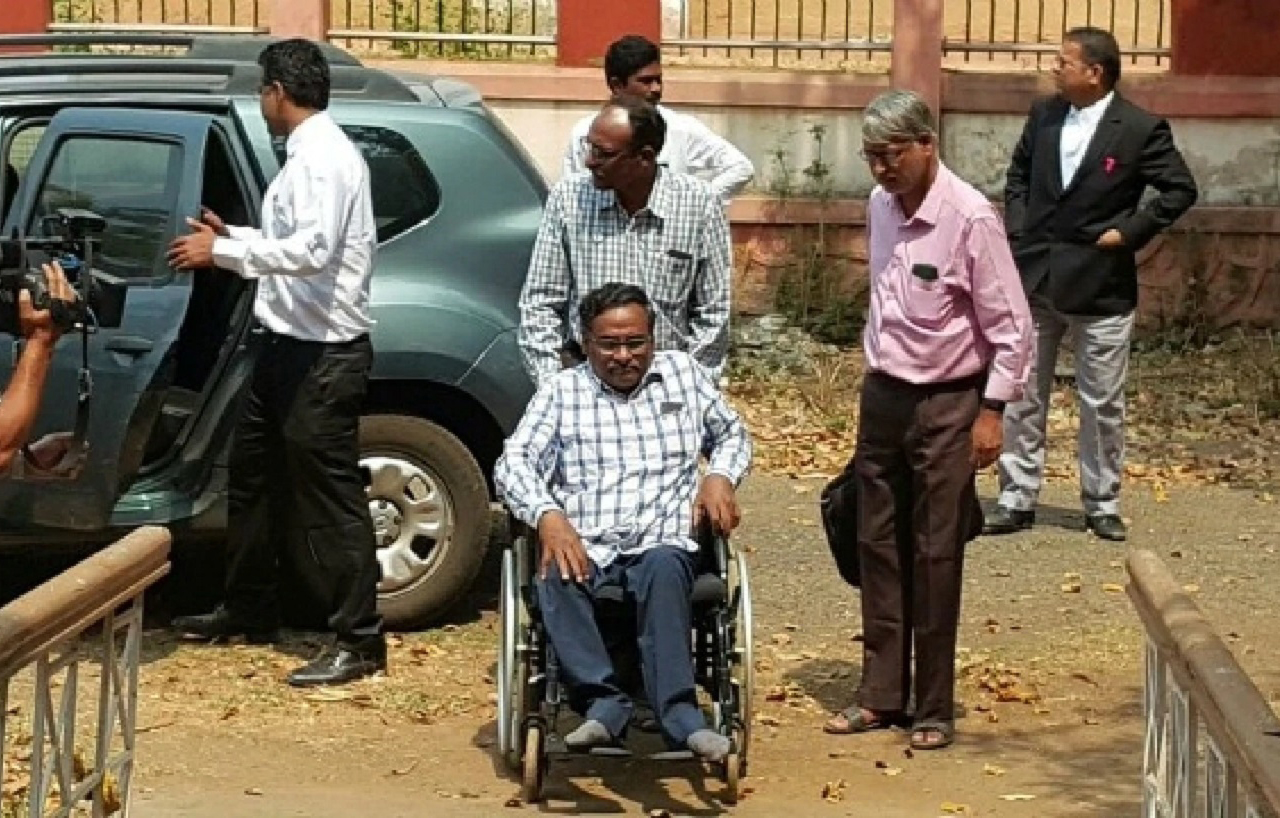 “Why is the State afraid of giving him bail?” — Activist demand release of Dr. G. N Saibaba

The Committee for the Defence and Release of Dr. GN Saibaba organised a press conference on 10 March, 2021, at the Press Club of India in Delhi. The Press conference was addressed by writer Arundhati Roy, former Member of Rajya Sabha D Raja, General Secretary of the National Platform for the Rights of the Disabled (NPRD) Muralidharan, former President of DUTA Nandita Narain, Professor Parminder Singh, filmmaker Sanjay Kak, wife of Dr. Saibaba and women’s rights activist Vasantha and activist-lawyer Prashant Bhushan. The speakers strongly underlined the need for his immediate release, adequate medical care and access to his family. Dr GN Saibaba, a wheelchair bound former professor of Delhi University with 90% disability and several severe co-morbidities, remains incarcerated in the Nagpur Central Jail, and had tested positive for COVID-19 on 12 February 2021.

Speaking at the press conference, Vasantha said 13 out of 25 people in his barrack had tested positive for Covid 19. Despite this, none of the inmates were taken to the hospital. They were provided basic antibiotics and told to fend for themselves. Distressed by the neglect of Dr. Saibaba’s health she asked, “why was he not taken to the hospital? Why is a person suffering from post-polio paralysis, a person who cannot walk, a person whose heart and mind work but every other part of his body is affected not being given bail? Why is the State afraid of giving him bail?”

Vasantha spoke of how Saibaba was not allowed to meet his dying mother or even perform the last rites after her death. Speaking of the strength shown by Dr. Saibaba who consoled her over the phone, she said, “he told me to not lose my confidence as these dark days will not continue for long. Every period of repression has to end. So, he asked me to continue fighting boldly for his release.”

Speaking for the rights of persons with disabilities, Muralidharan said, “the experience of Dr. Saibaba amounts to nothing but torture, cruelty and indignity.” He said that denial of assistive devices like wheelchairs for persons who cannot walk amounts to torture. He felt it is inhuman denying a person with such severe ailments reprieve and demanded his immediate release.

Nandita Narain reiterated the unequal nature of the law and said “today, justice looks at the face of the person standing before it and gives justice accordingly. If you are a Saibaba, Sudha Bharadwaj or others, false cases are foisted on you, something proved beyond doubt by the Arsenal Report.” She added, “we are here to demand his release on bail and proper medical treatment instead of the anda cell.”

Prashant Bhushan said that the continued incarceration of Dr. Saibaba amounts to torture and he called on the courts, the establishment and the others to ensure that he is released immediately. Prashant said, “they are now going after everyone who is seen as against the government. They have even gone after journalists who have written stories against the government. The method of doing this is by making any kind of charge. As seen in the Delhi Riots case, they have gone after people against whom they have no evidence, people like Devangana Kalita, Safoora Zargar, Umar Khalid besides many others, all of whom are targeted under the UAPA.” He added “unless the police are held accountable for foisting false cases, they will go on doing this.”

D Raja called on people from all sections of society to come together and demand Saibaba’s immediate release. Drawing connections between the UAPA, Sedition Act, the role of the BJP-RSS and the incarceration of Dr. Saibaba, he said, “today, anyone who questions the government is targeted. We are facing a grave threat to the ethos that we have been proud of. Today, we are witnessing fascist rule. Why are they afraid of Dr. Saibaba? They are not afraid of his body but his brain. The government is afraid of the questions raised by people like Saibaba and the hundreds and thousands of people coming to the streets questioning the policies of the State.”

Prof. Parminder Singh stressed on the need for all the democratic people and organisations to oppose and resist the neoliberal policies of the state. Locating the struggle against acquisition of land in central India with the present-day struggle of the peasants in the outskirts of Delhi he said that, “this (farmers struggle) is also a part of the same struggle as the ones waged by tribals and Dalits. Today, the peasants fear that their land will be acquired under one pretext or another.” He felt that it is not merely a question of livelihood under threat but the resources of the people under attack by the corporate world. And to defend these rights is to defend the basic rights of the people of this country to their livelihood, resources and culture and to live a life of dignity. In this context he found that to demand the release of Dr. Saibaba becomes absolutely urgent and legitimate as his incarceration is part of the onslaught against all those who speak against the attack on the resources of this country.

Arundhati Roy spoke of how the incarceration of Dr. Saibaba, a person in judicial custody, amounts to torture every single day that he spends behind bars. She said, “every single day something irreversible is happening to him. This is every day, slowly taking something away from him. While there is a sliding scale of access on the basis of ability, caste, class etc., for a person like Dr. Saibaba who is paralysed waist down, for him even in judicial custody he is tortured every day and everything that happens to him is irreversible.” Starkly reminding the audience that some of the best lawyers in this country, including Dr. Saibaba’s lawyer, Adv. Surendra Gadling, is in jail, she said “anyone who stands up for anyone is in jail. She felt that the nation is being hypnotized in some way. We have to capture the alternate, the reality, and disable this onslaught on the people of the country.

The Pdf link to the press statement issued by The Committee for the Defence and Release of Dr. GN Saibaba is given below.