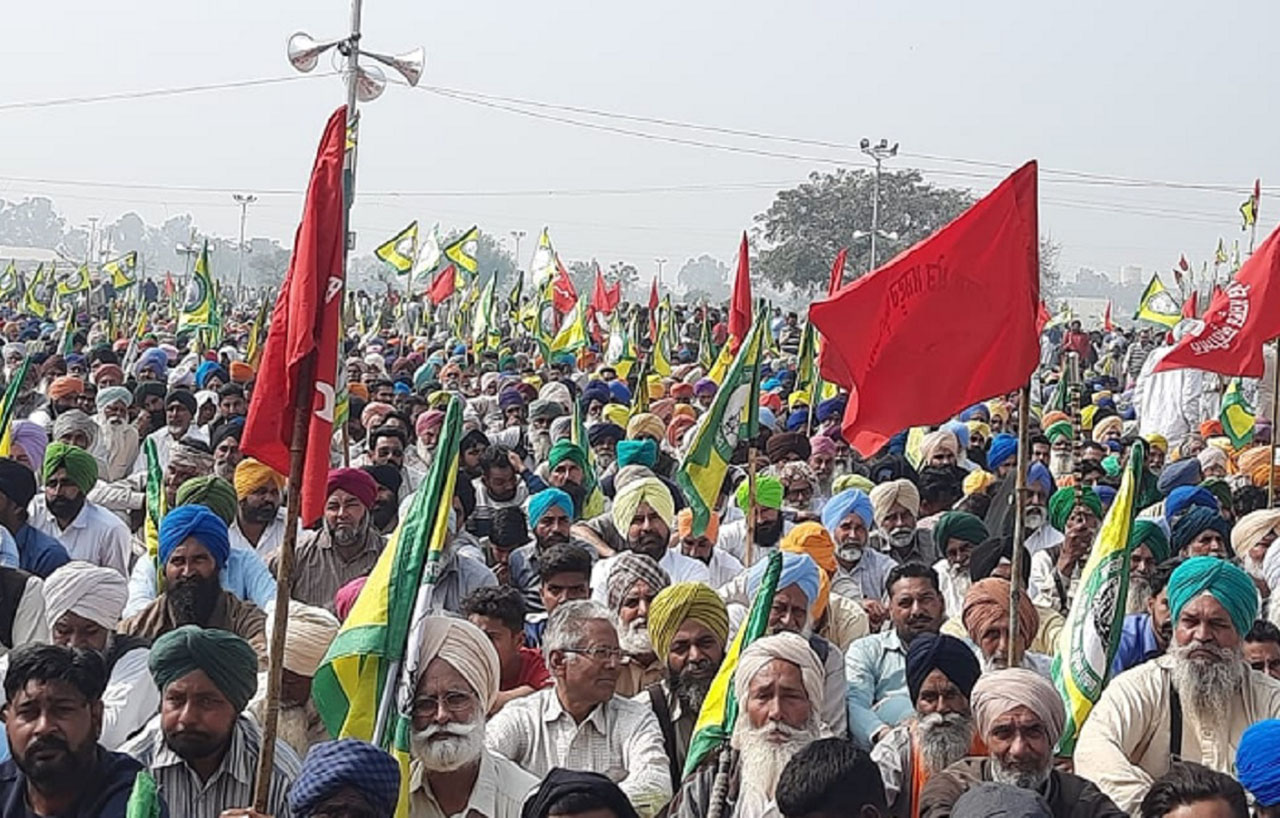 A report, by ‘Campaign Against State Repression’— a platform with over 36 organisations— on the press conference held on 1st March, condemning the incarceration of Shiv Kumar of Majdoor Adhikar Sanghatan and hailing Majdoor-Kisan Ekta.

Nodeep Kaur of MAS thanked all those who struggled for her release, recognising that without their efforts she would not be here today. She spoke of the pathetic condition of workers in Kundli and demanded that rights existing currently under labour law be implemented while the new labour codes be opposed. She spoke of how the police accused them of using the Kisan Andolan to organise workers, asking if the right to association has been banned and if workers demanding their due wages is extortion. She said the most pressing issue today is state repression and how it is on the upswing. She spoke of the branding as anti-national and targeting and arresting under draconian laws like the UAPA and NSA of all those who struggle for the rights of the people, particularly those coming from marginalised castes, communities and nationalities.

These actions, according to the Nodeep Kaur are aimed at crushing peoples’ movements but in fact reflect the weakness, fear and paranoia of the State. This fear, she felt, was aggravated by the threat to its relationship with foreign powers for whom the State brokered lucrative deals. She was confident in the power of the masses, that if worker, peasants, students, women, adivasis, dalits and Muslims all rose for their rights, the State will collapse instantly. Furthermore, as witnessed in her case, the arrest of activists spurs the masses into renewed and intensified struggles. She referred to the State, irrespective of the party in power, is an agent of big corporations, domestic and foreign and that State policy is mainly aimed at enslaving the masses to these interests.

She described the police as a tool used to attack the people and mentioned Prof. GN Saibaba as an example of the countless people languishing in jail today for raising the issues of the people. She felt that there is no true freedom or democracy for the people today; these can only be achieved through struggle against the State which is in truth anti-people and anti-national.

Surjit Singh Phool of the BKU (Krantikari) spoke of how Nodeep Kaur and MAS were instrumental in building worker-peasant solidarity and that this was the reason they were targeted. Besides workers and peasants, the government was also targeting intellectuals and journalists, an example of which is Mandeep Punia whom he dubbed a courageous son. He said there is a need to expose the falsities of the government and to demand the immediate release of all arrested alongside the quashing of the FIR on Nodeep Kaur and other activists of MAS.

Joginder Singh of BKU (Ekta Ugrahan) spoke of how the Modi government falsely used the term democracy to introduce anti-people laws. Lamenting the plight of workers forced into twelve-hour shifts, Joginder Singh spoke of how people undertaking peaceful protests were routinely arrested under false charges. Taking the example of Nodeep Kaur, he said all she did was raise the issue of workers, peasants and women for which she was brutally targeted, arrested and tortured.

Reiterating how rights of workers and peasants are intertwined and represent the interests of the people of this country, Vidya Sagar Giri of AITUC compared undemocratic legislation of the three Farm Laws to the replacement of forty-four labour laws by four Labour Codes. He said, “the ways in which laws are made reveal how the practice of debate and discussion has been buried to steam roll new laws that serve big industry. It is significant that the Wage Code was consciously passed during the uproar resulting from the abrogation of Article 370 to circumvent debate and discussion. Furthermore, the other three labour codes received presidential assent on September 28th 2020, the birth anniversary of Bhagat Singh, in effect making a mockery of all that he fought for.”

Sucheta De of AICCTU remarked on the deplorable conditions of workers and peasants across the country and how the slowdown in industry post the COVID-19 lockdown has been used to sack workers and deny them wages. Comparing the state of workers to that of bonded labour, Sucheta De referred to the incident at the Wistron Factory in Karnataka where workers were exploited in direct violation of the law. However, when they struggled for their rights, the police conducted a brutal crackdown with mass arrests. She considered the work of Shiv Kumar, Nodeep Kaur and MAS as the need of day and particularly referred to Nodeep Kaur as an example of workers unafraid to demand their rights. She also compared the manner in which those who fought for people’s rights were regularly arrested, including many involved in the protests against the CAA, NRC and NPR while those who openly resorted to violence like Kapil Mishra remained free.

Drawing parallels between the Bhima Koregaon, the protests against the CAA, NRC and NPR and the Kisan Andolan underway, Rajveer Kaur of BSCEM revealed the pattern by which the State routinely used fake charges to incarcerate those who stood against its anti-people and pro-corporate agenda. These fake charges are used alongside police violence and unleashing right wing goons to crush peoples’ movements. All three tactics were deployed against the MAS in Kundli with fake extortion charges, attacks by the police and the Hindu Jagriti Manch. Rajveer further expanded on the issue of fake charges referring to Rona Wilson arrested in the Bhima Koregaon case in whose laptop the State inserted fabricated documents. She also spoke of the brutal torture and casteist abuse Shiv Kumar suffered while in illegal custody and demanded his release alongside all those arrested in the Bhima Koregaon case and the North-East Delhi pogrom. She considered it the duty of all students and workers to join the peasants struggling for their rights today.

Ishwar Singh Rathi of NAM, whose organisation had led protests against the arrest of Nodeep Kaur and Shiv Kumar in Sonipat, spoke of how all resources of the country were utilised only for the benefit of a few large corporate houses. When workers can be sacked at a whim and peasants fined over Rs. 1 crore for burning their own crops, Rathi said there was no option but to protest. He referred to the Kisan Andolan as a historic protest and hoped the implementation of the anti-worker labour codes on April 1st would draw a similar response.

Nandita Narain of DUTA said that the words independence, freedom and democracy had no meaning today and those who wanted these things needed to fight for them. She considered unacceptable the Prime Minister’s mocking of those who struggled for their rights as Andolanjeevi. She condemned the attempts at communally dividing people and spoke of the hypocrisy in treatment meted out to Pragya Thakur and Maya Kodnani while Prof. GN Saibaba, a person with 90% disability, was condemned to rot in jail and suffer COVID-19 exposure without bail.

Rinchin of WSS spoke of the extent of police impunity in cases of sexual violence against women, especially dalit women. She saw the custodial sexual violence suffered by Nodeep Kaur coming in the wake of the custodial rape of a 19-year-old dalit girl in Butana, Haryana, the rape and murder of the minor dalit girl and subsequent cover-up by the police including forcibly cremating the body in Hathras, UP and Gurmandi, Delhi. These incidents reflected the misogynistic and casteist mentality of the police.

Sanjeev Mathur of BSM considered the questions raised today to be in essence concerning democracy. Speaking of the need to hold the government accountable, he bemoaned the fact that the media was not playing its role. He reiterated the need for people like Nodeep Kaur and Shiv Kumar, linking their dreams and struggles to our survival as a democracy. Journalist Mandeep Punia spoke of the coordinated targeting of journalists underway across the country. Be it Utkarsh Kumar Singh in Bihar, the three reporters in Kashmir, Siddique Kappan in UP or the raiding of the NewsClick office, the targeting of those who refuse to toe the line set by government is becoming rampant.

Narrating the torture he underwent, Mandeep Punia spoke of how he was stripped, doused in water, beaten relentlessly, abused and denied access to legal counsel. He said the fundamental rights of journalists are being trampled.

Shiv Kumar’s father Rajbir spoke of how the police did not even bother to inform him of his son’s arrest. In fact, while holding Shiv Kumar in illegal custody, the Police demanded that he and his wife produce Shiv Kumar in two days. After hearing of his arrest, when Rajbir tried to meet Shiv Kumar, he was denied access with the police stating quarantine requirements. Rajbir finally saw his son only when he was brought for a medical examination. He remarked that Shiv Kumar could barely walk and that his fingers and hands were bruised.

A statement issued by CASR condemning the custodial violence faced by Shiv Kumar and demanding his release along with the release of all peasants arrested in the wake of the January 26th Kisan Tractor Rally is attached below.