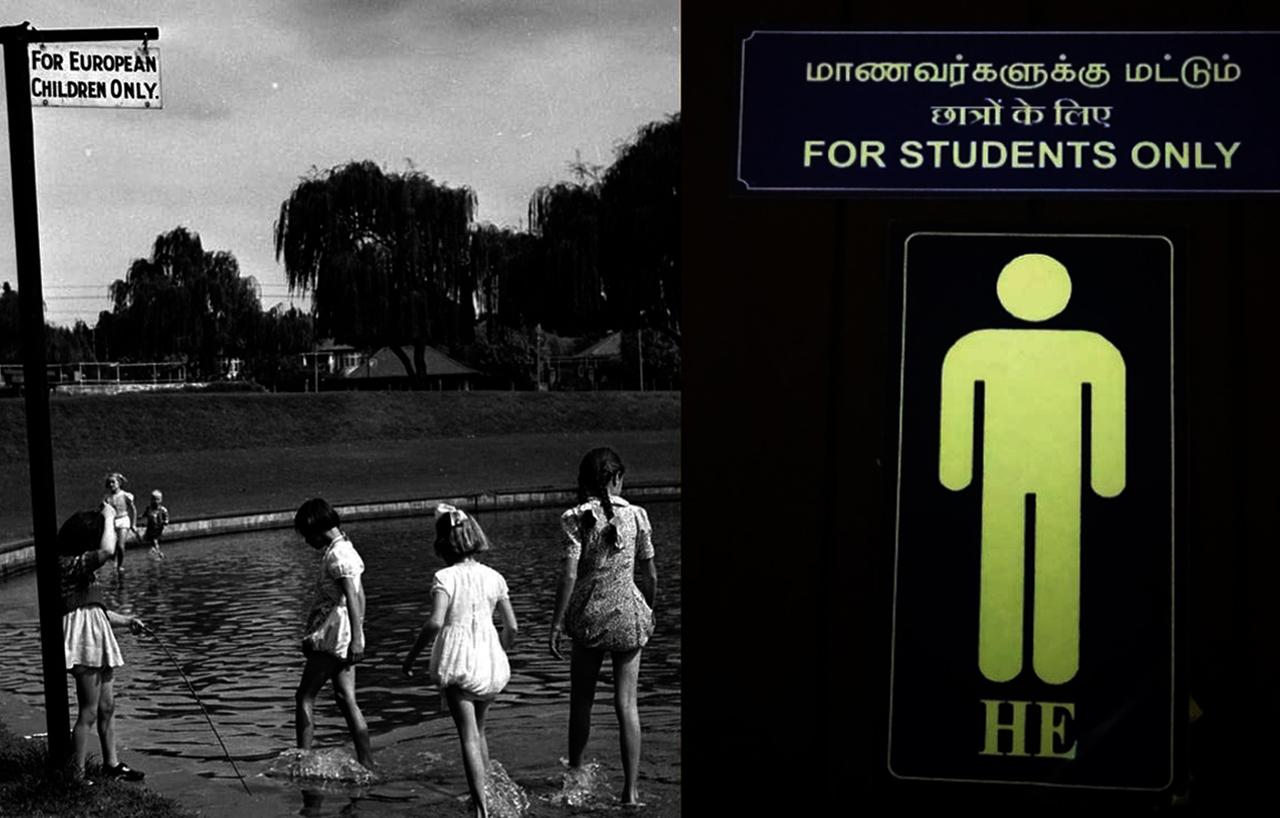 This atrocious casteist and classist episode happened in a premier research Institute recently, where a few students demanded that hostel toilets be exclusively used only by the students, and hence by fiat security guards and house-keeping staff (who clean these toilets!) were not allowed to use them. The Institute administration had put exclusive boards “for students only” outside each bathroom.

A few students and faculties opposed this and eventually the boards were removed, but the struggle to restore the dignity of those who were humiliated continues . These students and  faculty members summarise the entire episode here. They do not want to name the Institute or their names to be made public.

Groundxero is publishing this article because such incidents are not limited to a particular institute of research but the same casteist and classist mentality are commonplace everywhere in our country, from our homes to offices, schools to universities.

The beautiful town of Nainital has its own bleak history. The hill station was set up by the British and used for summer retreat by their high-ranking officials. Like most hill stations built in that era, it has a Mall road, a broad road lined with shops where the British could walk around and shop. There is another, smaller road that runs parallel but lower than the Mall road. The upper road, if you ask the old people of Nainital, had a notice board in the British era that read: “Indians and dogs need not enter”. Probably the only time the British would have tolerated an Indian on that road, was when he/she was cleaning it.

It probably has been 74 years since that sign was removed from the mall road. But an eerily similar sign had come up after these 74 years in an “elite” institute of “higher learning” in this same country. This time it read: “For Students only” and it had been placed on every bathroom and toilet door of the Hostel. These washrooms are cleaned daily by a dedicated staff of workers earning about half of the government sanctioned minimum wage. The same workers also clean the rooms and offices of these students. And these signs on the doors are asking them not to even take a leak in the toilets they are about to clean. A constant resistance by certain students and faculty members aided by support via the past members of the institute has ensured that the signboards are removed for now.

But here is the absurd part—it was the student committee that had approached the administration to demand those signboards. Why? Because, as some of the students argued, it increases the risk of Covid infections! Somehow, the students came to the conclusion that Covid may spread faster if the person cleaning their room and toilets also takes a leak in the toilet. These signboards also barred the security guards from using the ground floor washrooms, which were the closest washrooms to their stations of duty. Mind you, at the time this request was made by the students, the security guards were also staying in the institute full time, just like the students. So, chances of them having Covid were equal to the chances of any one of the students having the infection.

As the easily falsifiable argument of Covid infection became useless, a section of the students and as well as some faculty members resorted to arguments based on private property rights! The claim was that the students partially owned the toilets, as they pay for it through their housing allowance. So that makes the toilets their private property, thereby giving them the rights to allow or not allow anyone to use “their” toilets. There were also the usual arguments of hygiene thrown around. They claimed that if people who guard us and the people who clean our toilets are not allowed to use the common toilets, the toilets would remain more hygienic. If this is not a sign of classist, casteist mentality, we don’t know what is. The same classist and casteist undertones are also expressed in our homes when we do not allow a house maid to sit on the couch she just dusted or use the toilet she cleans every day.

A few students and faculty members are still vehemently opposing the idea that the common hostel bathrooms in this government institute can also be used by the security guards and the cleaning staff. Faculty members have asked the students to debate amongst themselves and decide, based on the majority opinion, if they want to “allow” the workers to use the bathrooms or not. More specifically, they want the students to “settle the debate of hygiene vs political correctness”. Thus, in their dealing of student issues, both the faculty and administration seem to have undergone a very sudden change of attitude. Only a few months ago, the students had raised their opinion against the proposed change of mess system from an institute-controlled mess to an outsourced mess. A year earlier, 70 students and faculty members had written a letter to the director to allow a talk to be held on the campus on the CAA-NRC issue by a well-known lawyer. Both these demands were completely ignored by the administration and some faculty members. But now, when it comes to taking a decision on such a clearly misguided and atrocious demand by the students, the administration and some faculty members who preside over the responsible committees are trying to wash off their hands, along with giving some horrifying advice to the students.

What is disappointing is the failure of the faculty members to acknowledge that the cleaning staff and security guards, on whom the hostel students rely heavily to get their daily needs met, belong to the hostel and are very much part of the hostel environment. Equally disappointing and disheartening is the silence of several faculty members on this issue, (and on many other issues of societal concern); many of whom are otherwise vocal about injustices outside the institute but choose not to take a stand within the institute. There are several reasons for this. An obvious reason is that taking a stand while being inside one’s comfort zone is not the same as taking up issues in one’s work place. Then there is also the sad fact that the institute in question is exempt from reservation by law, and as a consequence, that the representation of SC/ST, OBC and minority communities in the faculty composition is terribly low. Implementation of reservation probably might make the faculty take into consideration the societal injustices in our society while they implement a decision of such ramifications.

In all these struggles, without a union of their own, the guards and the house-keeping staff, who had been using the hostel toilets ever since the hostel was constructed and never before encountered any opposition in using the hostel toilets, remain a passive entity. With no recourse to have their voices heard, they have to rely on voluntary solidarity of some students and faculty members. Even though the signboards have been removed, the casteist and classist poison remains. Since it is implicitly clear to the guards and housekeeping staff that they are not “welcome inside the hostel”, in spite of the boards being removed, their fight for dignified access to their workspaces is far from over.

For some reason, it’s always the people with the least privilege that are asked to make compromises due to Covid. The images of scores of people walking hundreds of kilometres after a surprise lockdown might still be fresh in our minds. But it wasn’t only the death of the informal sector that forced crores of people into unemployment. It was also the death of morality and sympathy in the elite institutes like the one currently under discussion that pushed several into extreme poverty. Immediately after the lockdown, the cleaning staff, the mess workers and the security staff had to face a severe cut in their salaries. Many of them were outright removed from their jobs. All these workers were contract workers, so the institute’s administration does not even think of them as their responsibility. These people cannot demand anything from the institute, not even a place to take a leak. They are benevolently “given” a place to take a leak somewhere in the institute. If they raise their voices, their contractor is always there to “handle” them, thus saving the administration “unwanted concerns”. This reinforces the absolute need for them to organise and become a unified force within campuses.

At Rs. 6000 per month, cleaning a toilet they are not allowed to use, and left with no way of demanding a better treatment, this is what slavery in an elite Indian institute looks like today.