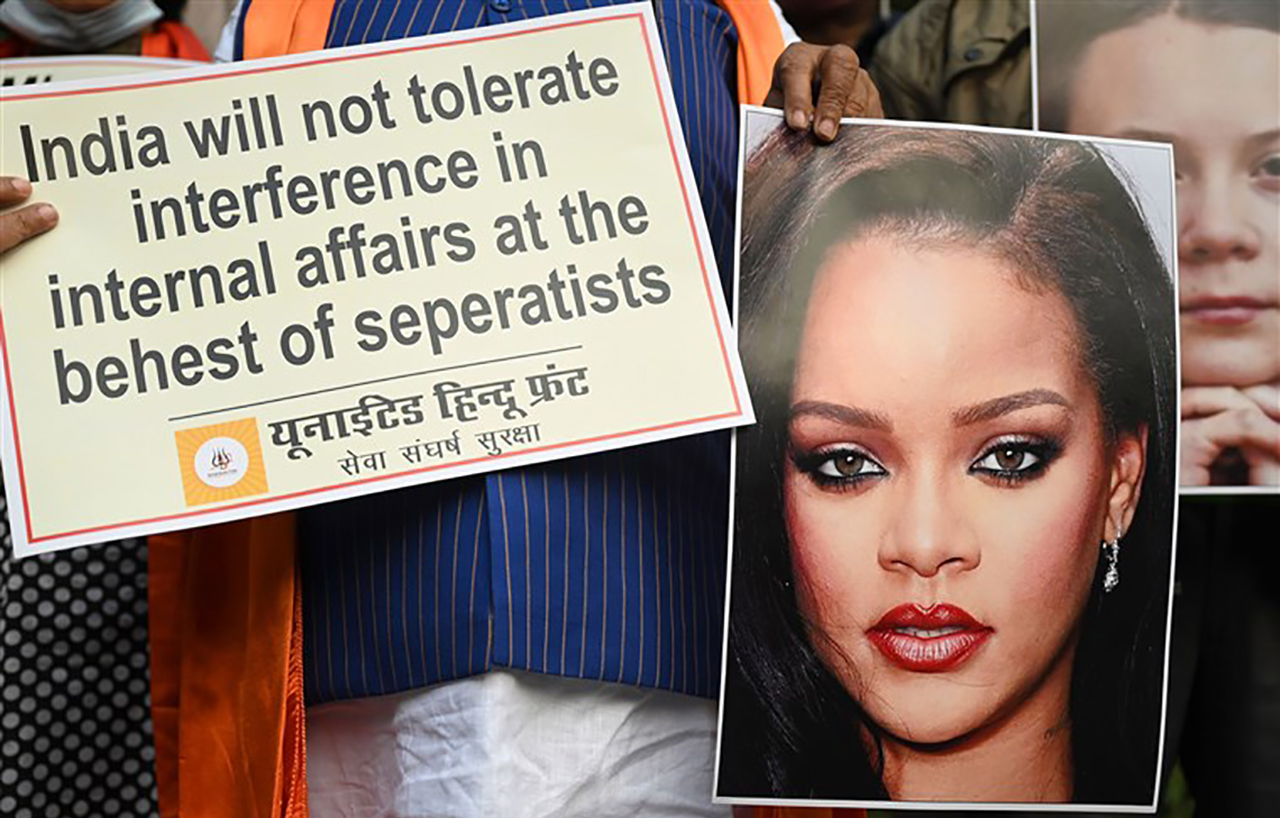 International Solidarity is Not the Same As Imperial Aggression

Every progressive voice raised in protest sounds seditious to the current Indian government – be it from within India or outside. Writes Pritha Paul.

Farmers across North India have been staging protests since December 2020, based upon merely one demand to the government, repeal the new farm laws. Their demands, as well as their deaths caused due to the cruel cold of Delhi and the harsh reality of despair, largely went ignored by those sitting in the comfort of the Parliament. Not one word could be forced out of the mouth of our Honourable Prime Minister. That is, until the protests began trending on social media internationally. After having successfully diluted four out of the five essential features of the Indian Constitution, the Indian government suddenly decided it was time to be its saviour. What months of heartbreaking appeals by Indian citizens could not get, one tweet from a foreign pop-star succeeded to achieve – the PM’s valuable attention and a response from the central government. Unfortunately for Indians, however, the statement issued by the Ministry of External Affairs not only failed to address the “internal matters” of concern being raised for months, rather it solely focused on damage-control and an attempt at restoring the government’s image on the international platforms, while condemning international attention on the farmers’ movement and the ensuing human rights violation in India.

The government strongly criticized international “interference” in Indian matters, calling it an attack on our sovereignty. Sovereignty refers to the ability of a state to govern itself, free from external control. It is, no doubt, precious, especially to a country which fought for two hundred years to gain some semblance of political sovereignty. However, like every good thing that hasn’t perished, the meaning of sovereignty too has evolved over time. In an era of cross-cultural communication, international influence has played an important role, for better or for worse, in shaping the country that we today live in. 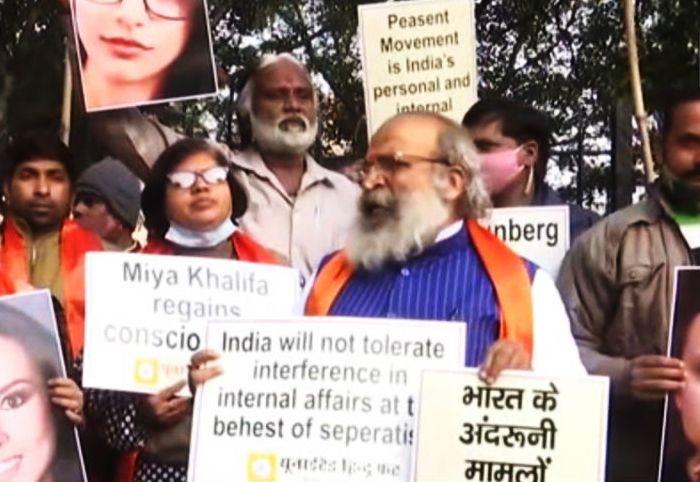 Protest rally in Maharashtra against the so-called international interference (2021)

An example, perhaps, will make my point clearer. The judgement of Vishakha v State of Rajasthan is a landmark judgement, which established guidelines for the safety of women in the workplace. However, this is also one of the most controversial judgements in Indian jurisprudence, having become a poster child for judicial activism. With no domestic law to rely on, the Court had realized how grave the problem of sexual harassment and assault in the workplace is for women. Without waiting for the legislature to enact a law on the subject, which, incidentally, took 16 years, the court immediately turned to international conventions to address the issue of gender inequality. A more direct approach was taken in Navtej Singh Johar v UOI, where the Court cited state practice in countries like the US, UK, Canada, South Africa amongst others, to buttress its decision to declare section 377 of the IPC, which criminalized homosexuality, unconstitutional. This reliance of the courts on foreign jurisprudence did not mean India was not sovereign. It simply meant, that India, as an active member of the international community, was willing to examine itself against the standards of the best practices in the world.

The government itself is more aware, than it shows, of the importance of maintaining foreign relations. While condemning celebrities tweeting in favour of the farmers’ protest, the government itself has launched an international outreach program in order to engage with foreign nations through its embassies and international organisations like the FAO, WTO, IMF, World Bank to persuade them to support the farm laws in India. In this regard, one might also think of the support of the newly-elected President of United States, Joe Biden’s support of the farm laws. In other words, international response to the farm laws, have hardly been homogenous.

Two questions in this regard may be raised. First, while the Indian government accuses individual celebrities of breach of sovereignty of India, can it also proceed to seek the approval and support of organizations which practically have more authority to interfere with India’s sovereignty, almost in the same breath? Certain policies of the WTO have been widely criticized as violating the very idea of  national sovereignty, as well as detrimental to the agricultural sector of poor and developing countries. Its strict regulation of agricultural budgets and subsidies, it has been argued, adversely affects the rural economies, while allowing rich sections to become richer in developed nations. If the Indian government truly believes that its sovereignty would come under a threat if other countries even ‘comment’ on Indian matters, shouldn’t it also say “no” to the farm laws which are to be instituted on the recommendations of an international organization, like WTO, in the first place? Why does the government, then, even go door to door, to every country, to convince them of its intention? 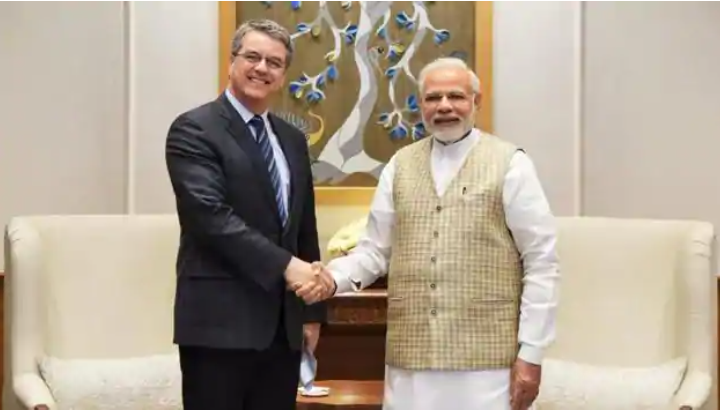 This brings us to the second question. If comments by foreigners on Indian issues are considered to be a breach of sovereignty for India, isn’t India’s attempt at shaping other countries’ opinion not a breach of their sovereignty? While the former merely constitutes people sharing their opinion on global issues, the latter is a country’s active participation in influencing another country’s external affairs. By the same token, shouldn’t the Indian government refrain from commenting on the condition of the Hindus, in the neighboring countries such as Pakistan and Bangladesh?

While sovereignty gives a nation the right to remain free from coercion, it does not guarantee a nation immunity from criticism or the consequences of its actions. Thoughts, expressions and sharing of opinions cannot be throttled in the name of sovereignty just because they are not in agreement with a government policy. This is especially true when the situation deals with human rights violations. The last decade saw a rise in the number and intensity of people’s movements. From the anti-fascist feminist movement in Chile to Poland’s protests against the ban on abortion, from the Black Lives Matter movement to Thailand’s protests against the country’s monarchy, the progressive international community has often watched with curiosity, how a new global language of dissent is emerging.

As the protests have gained momentum, so have the state machineries in trying to subdue the protesters. Videos of water-canons, tear gases, bullets and batons flooded the social media, and so did messages of support, commitment, and solidarity. Love was sent across borders, hope was borrowed across nations. Slogans were shared, songs were translated. Governments, in attempts to restore their legitimacy, labelled the protests as sham and the protesters and supporters as conspirators. This is hardly surprising. Individuals whose sole motive is to grab as much power and authority as possible, hardly understand the satisfaction that solidarity brings. They wonder why one would care about others without any incentive. It obviously also efficiently distorts the narrative and shifts critical focus away from the actual issue to the “authenticity” of individual protesters.

False narrative building is not a new strategy in India. When people died standing in ATM lines during the fateful event of demonetization, the government told us to remember the soldiers standing at the borders. What they failed to remind us of is that, no one, not even soldiers, should have to die at the whim and fancy of the government. When the country fumed over the Citizenship Amendment Act, 2019, the government singled out the Muslim community, branding them as “traitors” and “terrorists.” The false narratives created an atmosphere of tension among different religious communities which ultimately led to the infamous Delhi riots.

Many activists and protesters were framed under the draconian laws such as UAPA. Protest itself was branded as seditious.  A similar attempt was made after the farmers’ rally on the 26th of January, 2021, when protesters were falsely accused of insulting the Indian flag. While it is heartbreaking that a flag receives more empathy from the government than the people it represents, this is all too familiar. Instead of focusing on the blame game, the farmers quickly reasserted what the main issue of conflict is, and demanded the repeal of the farm laws. Despite the government’s attempts to defame and intimidate the foreign celebrities, they have swerved every jibe thrown at them and remained focused on the issue at hand. Instead of trying to refute allegations of being paid to tweet in favour of the protests, which would anyway have been futile, they have made a mockery of the claims turning them into jokes and punchlines, exposing their utter ridiculousness. 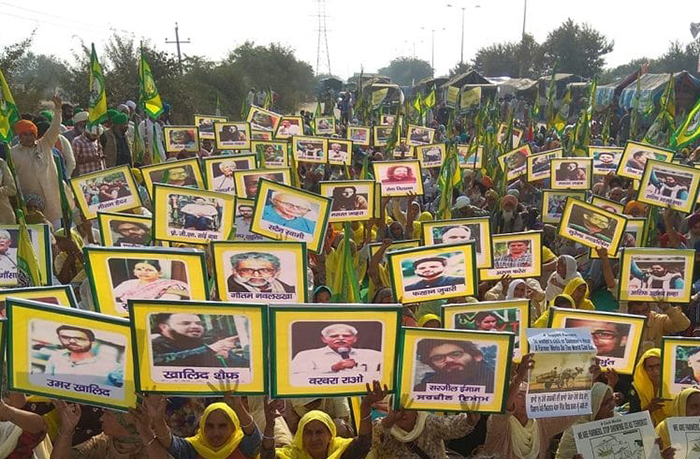 All cross-border interactions, after all, cannot be homogenized. International solidarity is not, and has never been the same as imperialist aggression.