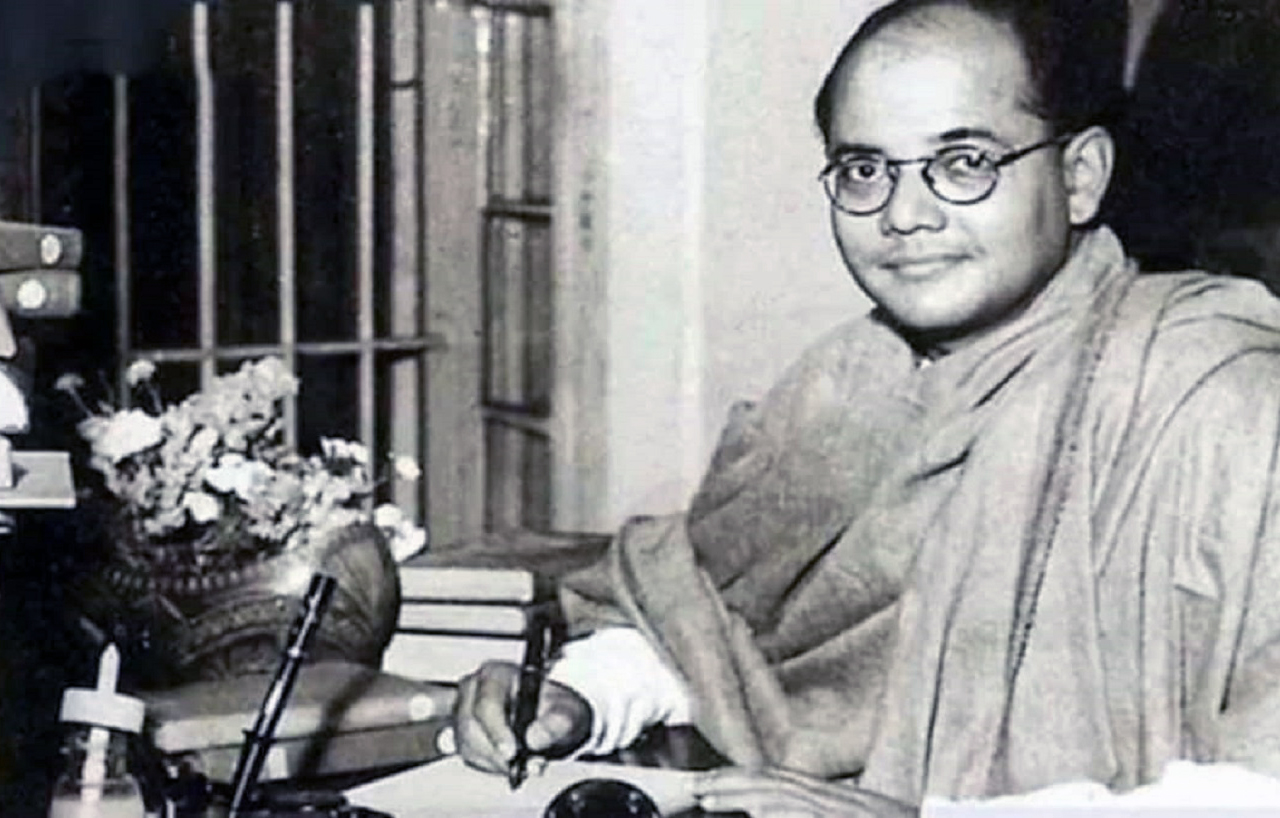 Netaji: the anti-thesis of Sangh Parivar

The great sound and fury of the BJP and its cohorts over the so-called Parikram Divas, marking the birth anniversary of Netaji, only shows up the efforts of this brigade to appropriate another national icon, whose thoughts are diametrically opposed to that of the Sanghis, for the purpose of gaining some extra mileage for the upcoming assembly elections in West Bengal. What else explains the surfeit of saffron at an event to mark Netaji’s birthday, purportedly arranged by the central government at Victoria Memorial? What explains the repeated cries of ‘Jai Sri Ram’ interrupting the speech of the CM at the event to commemorate an absolutely secular person like Subhas Chandra, writes Pranab Kanti Basu.

Recently the Hindutva brigade has been making frantic attempts to distort history and appropriate the icons of Bengal and India, like Rabindranath Tagore and Chaitanya Dev, who had always stood for unity in diversity and against narrow religious bigotry. This, for their electoral propaganda. The latest victim is Netaji Subhas, who they are desperately trying to reduce to just a brave freedom fighter. But even a cursory reading of history and the writings of Subhas Chandra Bose exposes the lie of this unfortunate devaluation of a great visionary and fearless thinker.

In the editorial of the weekly, Forward Bloc of 8th May, 1940 Subhas Bose wrote:

In the introductory chapter of the collection titled The Indian Struggle 1920-42, compiled by Sisir Chandra Bose, Subhas Bose had written:

“With the advent of the Mohammedans, a new synthesis was gradually worked out. Though they did not accept the religion of the Hindus, they made India their home and shared in the common social life of the people – their joys and their sorrows. Through mutual cooperation a new art and a new culture was evolved, which was different from the old but which nevertheless was distinctly Indian. In architecture, painting, music – new creations were made which represented the happy blending of the two streams of culture”.

No explanatory note is necessary to understand in what light Netaji held Islamic people and their culture. Contrast with this the fact that on the one hand the Sangh Parivar and the Central Government have launched a crash programme of reducing Netaji to just a brave freedom fighter, perhaps even the bravest, ignoring his vision, on the other hand they have launched a veritable struggle to disenfranchise Muslims towards whom Netaji felt nothing but fraternal love. Neither do they spare any opportunity to brand everything that Indian culture has borrowed from Islamic culture as anti-national.

When Shyama Prasad Mukherjee, a cult figure of the Hindutva brigade (who, quite infamously, wrote to the Governor of Bengal at the commencement of the Quit India movement to use all means at his disposal to quell the disturbance created by the movement) joined the Hindu Mahasabha, Bose came to meet him. According to the version of the meeting recorded in Shyama Prasad’s diary, Bose told Mukherjee that if he tried to establish the Mahasabha as a political force in Bengal, “he (Subhas Bose) would see to it, by force if need be, that it was broken before it was really born”. Apparently Subhas Chandra Bose kept his word, going by the words of Balraj Madhok, a leader of Hindu Mahasabha at that time. “Subhas Bose, with the help of his supporters, decided to intimidate the Mahasabha by the use of force, His men would break up all Mahasabha meetings and beat up the candidates. Dr. Mukherjee would not tolerate it. He got a meeting announced, that would be addressed by him. As soon as he rose to speak, a stone hit him in his head, and he began to bleed profusely’. One can debate about the propriety of using violence to prevent Mahasabha meetings, but these records leave no scope of doubt regarding Netaji’s aversion for the communal politics of the Sangh Parivar.

In the same collection edited by Sisir Bose, there is a piece by Subhas Bose titled ‘Free India and her Problems’. In this article Netaji elaborates his conception of what should be the nature of polity and economy post-independence.

This is a short and dazzling vision of a free socialist India, where there will be neither religious nor cultural discrimination. This is obviously light years away from the Hindutva brigade’s Ramrajya.

In the same piece Subhas Chandra talks of the so-called Muslim problem created by the Britishers. ‘British propaganda has deliberately created the impression that the Indian Mohammedans are against the independence movement. But this is altogether false. The fact is that in the nationalist movement, there is a large percentage of Mohammedans…the vast majority of the Indian Mohammedans are anti-British and want to see India free. There are no doubt pro-British parties among both Mohammedans and Hindus which are organised as religious parties. But they should not be regarded as representing the people.” He adds “The Mohammedan problem in India today is an artificial creation of the British similar to the Ulster-Problem in Ireland and the Jewish problem in Palestine. It will disappear when British rule is swept away.” It appears as if the Sangh Parivar, which had strenuously opposed both the non-cooperation movement and the Quit India movement, has carried over the British agenda!

Bose also details his understanding of the immediate issues that would have to be tackled by free India. He says that poverty and unemployment are the two main problems confronting India. Mark that, in contrast, the main agenda of the BJP is to establish a Hindu state. They have taken no measures for job creation (even before the pandemic the rate of unemployment was the highest in 45 years); rather they have amended the labour codes almost removing all restrictions on the maximum daily work hours in capitalist enterprise. As a result workers will have to bear with inhumanly long hours of work, which has further reduced the possibility of job creation. Bose further says, “About seventy per cent of the peasantry have no work for about six months in the year. India will therefore need industrialisation and scientific agriculture through state aid if she has to solve the problem of poverty and unemployment…The free Indian State will have to look after the welfare of labourers, providing him with a living wage, sickness insurance, compensation for accidents, etc”. Contrast this with the policy of selling off all state enterprises to crony capital and the attempts to induce contract farming and open up the agricultural market to the Ambanis and Adanis, with no assurance of MSP – all policies that the farmers are protesting against in the face of great odds in the outskirts of the national capital.

He analysed in the essays in this collection, how the policies of the colonial state had reduced India to the condition of abject poverty and unemployment.

Apart from the economic problems confronting the nation Bose also discussed briefly, in the same article, the other problems facing India. He thought that through a balanced mix of traditional medicinal knowledge and practices and modern medical practices of the West, a state aided health system could be devised such that no one would be deprived of health services and epidemics could be averted. Regarding education he had this to say, “we have the terrible problem of illiteracy, the percentage of which is about 90 % in many parts of our country. But this problem is not difficult to tackle, if the state can provide the necessary funds. We have now a large number of educated men and women, who are without employment. Under Free India all these men and women could be sent to work at once all over the country in order to erect Schools, Colleges and Universities”. This effort, he argued, could be combined with the ongoing educational experiments going on at Santiniketan, Gurukul, Jamia-Milia and elsewhere as also our traditional systems of education to create a state sponsored educational structure that would be able to lift the masses from illiteracy.

He realised, as is documented in the same article, that to supervise the huge state effort in industry, agriculture, education and health, it was necessary that there should be a planning commission. He also mentions that as the President of INC, in 1938, he had inaugurated a Planning Commission to analyse these problems.

From this brief survey of the thoughts of Netaji Subhas Chandra Bose, it should be evident that, in his opinion, after independence India could rid herself of the fundamental flaws in her economic and social systems by changing her legal system and introducing national planning to create a secular, socialist republic. It does not require much imagination to appreciate the great distance of this vision from the Hindutva brigade that is subservient to the demands of the crony capitalists. The great sound and fury of the BJP and its cohorts over the so-called Parikram Divas, marking the birthday of Netaji, only shows up the efforts of this brigade to appropriate another national icon, whose thought diametrically opposed that of the Sanghis, for the purpose of gaining some extra mileage for the upcoming elections in West Bengal. What else explains the surfeit of saffron at an event to mark Netaji’s birthday, purportedly arranged by the central government at Victoria Memorial? What explains the repeated cries of ‘Jai Sri Ram’ interrupting the speech of the CM at the event to commemorate an absolutely secular person like Subhas Chandra?