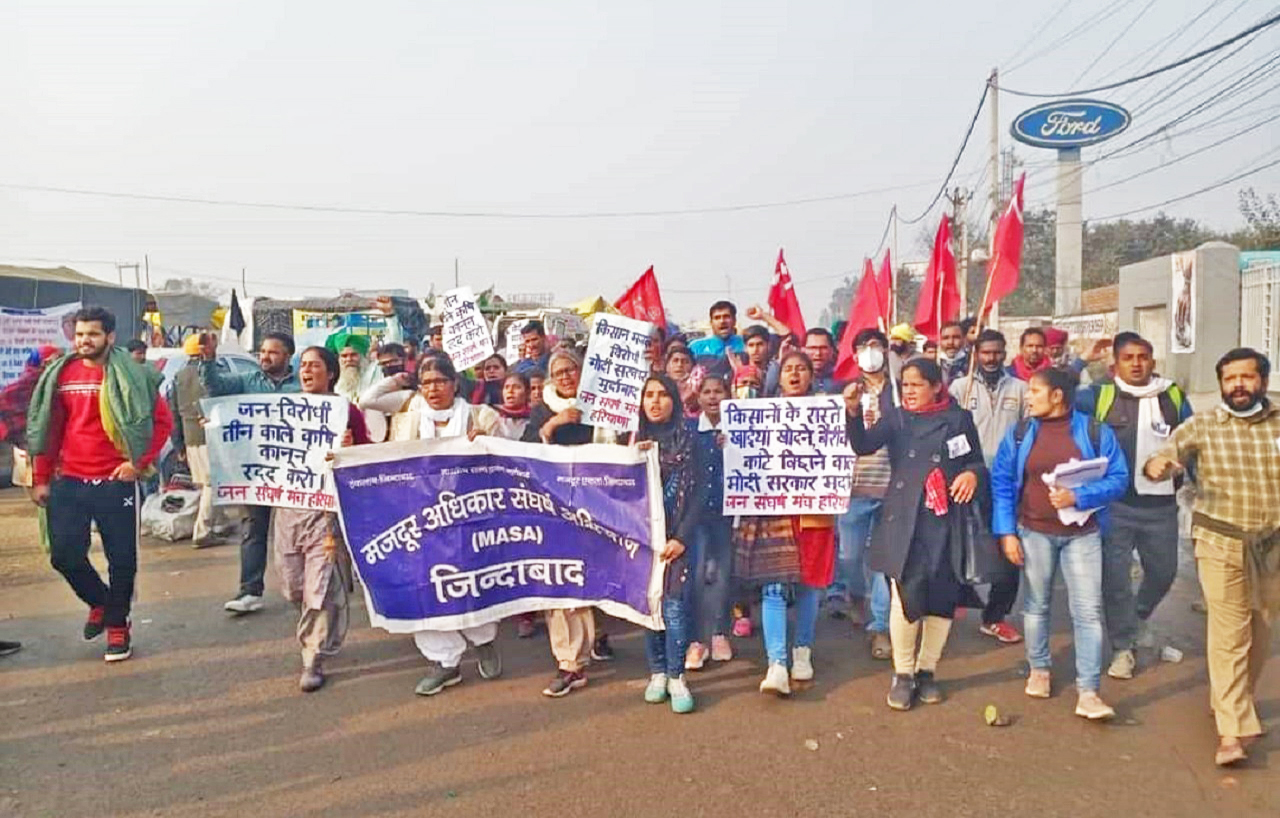 In the midst of the Kisan Andolan at the borders of Delhi, workers at Kundli Industrial Area are being targeted by the armed guards of the Kundli Industrial Association and the Haryana Police. On January 12, the Haryana Police barged into the Majdoor Adhikar Sanghatan (MAS) tent erected in solidarity with the protesting farmers and peasants at the Singhu Border and arrested a 24-year-old dalit woman, a worker and trade union activist Nodeep Kaur. The targeting of workers and the brutal sexual violence on Nodeep Kaur in the custody of the police comes alongside persistent efforts to discredit and malign the Kisan Andolan.

Campaign Against State Repression (CASR) strongly condemns the actions of the Haryana Police, demands her immediate release and the perpetrators be brought to book.

The targeting of a young dalit woman who dared to raise her voice for the rightful demands of the workers has been met with the most cruel, misogynistic barbarity of the men in uniform who have resorted to sexual violence. 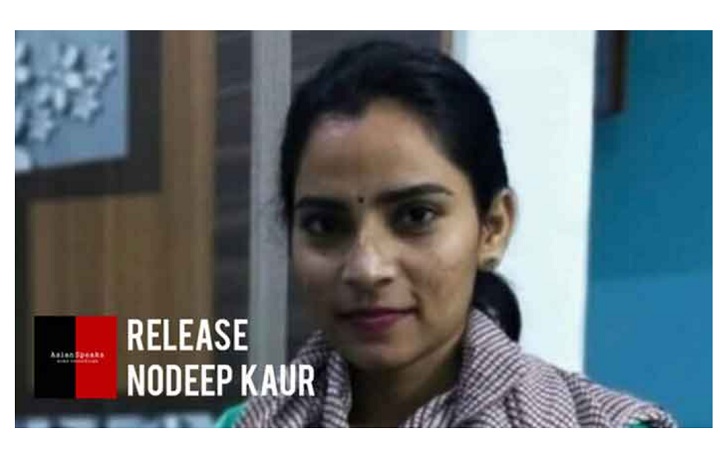 On January 12th, the Haryana Police barged into the Majdoor Adhikar Sanghatan (MAS) tent erected in solidarity with the protesting farmers and peasants at the Singhu Border and arrested a 24-year-old dalit woman, a worker and trade union activist Nodeep Kaur. She was then taken to the Kundli police station where two different FIRs were filed against her, FIR 25/2021 and 26/2021. One under sections 148, 149, 186, 332, 352, 384, 379B and 307 of the Indian Penal Code and the other under sections 148, 149, 323, 452, 384 and 506; a wide range of sections including rioting while armed with deadly weapon, unlawful assembly, causing hurt to public servant, assault and criminal force, trespass, extortion, snatching, criminal intimidation and attempt to murder. These FIR’s are based on statements by a police inspector and the accountant of the company that had failed to pay the workers’ wages, M/S Elecmech Pvt. Ltd. While in police custody, she was brutally beaten by male police officers including her genitals amounting to sexual violence. In the midst of one of the largest peasant agitations in recent times where workers of the Kundli Industrial Area have shown solidarity with the agitation, the Haryana police, after repeated efforts to break this unity, has shown its brutality through heinous sexual violence perpetuated against a young dalit woman hailing from a landless peasant family in Punjab. Nodeep Kaur has since been sent to Karnal Jail where she remains in judicial custody for two weeks. Meanwhile, the threat of arrest of more workers looms large over the Kundli Industrial Area.

Nodeep Kaur works in Kundli Industrial Area and, as a part of Majdoor Adhikar Sanghatan (MAS), has been taking up the issues of worker harassment by management, unpaid dues of workers, pending wages and rampant exploitation of women workers. Without unions and representation, the workers are largely working on contract and were not paid wages during the lockdown despite the Ministry of Home Affairs order No. 40-3/2020-DM-I(A) dated March 29th, 2020 ensuring the same. They also face daily threats of violence and outright assaults at the hands of the extra-legal armed force of the management and contractors called the Quick Response Team (QRT) sponsored by the Kundli Industrial Association (KIA), a body of factory owners and management. The sole purpose of the QRT is to intimidate workers and quash any attempts at building unions, a constitutionally guaranteed right of every worker, through brute force and violence. Over the last couple of years, those belonging to MAS, an organisation of former and current workers in Kundli including men and women, have faced the ire of the management and their private armed force. During the lockdown the workers, who are largely migrant, mobilised to ensure adequate relief in the form of food grains from the Haryana State. Post these efforts, they were first targeted by a local force of factory and land owners called the Hindu Jagriti Manch, members of which once violently attacked a meeting of the MAS. After the lockdown was lifted, the condition of workers in Kundli was pitiable due to non-payment of wages and the MAS redoubled their efforts by taking up the cases of the workers winning the confidence of many. The arrival of the Kisan Andolan to the Delhi border near Kundli brought slogans of Kisan-Majdoor Ekta. Mobilising support for the struggle, workers in Kundli organised rallies and programmes. Likewise, many peasants, touched by the unflinching support of the workers, came forward to help the workers in their struggle. With the help of the peasants, the MAS was able to successfully obtain wages for over 300 workers.

Targeting this unity, the factory owners and management let loose the QRT on the workers and these attacks grew more frequent and more violent. The QRT particularly started targeting workers who had been taking time out of their grueling shifts to aid the peasants camping at the border. On January 2nd, when the workers went to the company demanding their unpaid wages, the QRT fired shots at the workers. The MAS members immediately went to file a complaint with the police. The Kundli police refused to register their complaint. The workers then sent an application to the Superintendent of Police in Sonipat. Yet, the police refused to take any action. Instead, the police filed charges of ‘extortion’ against workers. While the QRT admit they fired in “self-defence”, the police deny any firing took place. Again, on January 12th, the workers went to the factory demanding the payment of wages. Instead, they faced brutal lathi-charge and firing including misbehaviour with women workers some of whose clothes were torn. When efforts made to break the resolve of the workers and their unity with the Kisan Andolan through various pressure tactics failed, they arrested Nodeep Kaur and concocted ludicrous charges against her. Today, those rightfully asking for wages are being targeted, sexually assaulted and brutally beaten in police custody. Moreover, the targeting of a young dalit woman who dared to raise her voice for the rightful demands of the workers has been met with the most cruel, misogynistic barbarity of the men in uniform who have resorted to sexual violence. The impunity of the police stands firmly on a Brahmanical, patriarchal, Hindutva ground. The collusion between the factory owners, management, their armed force, local groups like the Hindu Jagriti Manch and the Haryana police is there for everyone to see. Meanwhile, worker-activists like Nodeep Kaur are arrested and sexually abused in custody while a systematic smear campaign is launched against them in the media. The desperation of the corporate-state nexus rears its head at the mere hint of worker-peasant unity. The Brahmanical Hindutva fascist forces are aided and abetted by police complicit in their anti-women, anti-dalit, anti-worker and anti-peasant agenda turning to outright state repression when all else fails.

The role of the KIA factory owners and management, their private armed force and the Haryana Police in targeting workers must be seen in light of the threat that worker-peasant unity poses to these forces. It is a part of the relentless efforts made to discredit and malign the Kisan Andolan in the face of growing support for the struggle. The Campaign Against State Repression (CASR) denounces these vile actions of the Haryana Police against Nodeep Kaur and workers like her, demands her immediate release and an immediate cessation to the targeting of workers. CASR also unequivocally condemns the custodial sexual violence faced by Nodeep Kaur and demands strict action against the perpetrators in uniform. And, finally, we call upon all democratic forces to come together, condemn these actions of the Haryana Police and demand accountability.