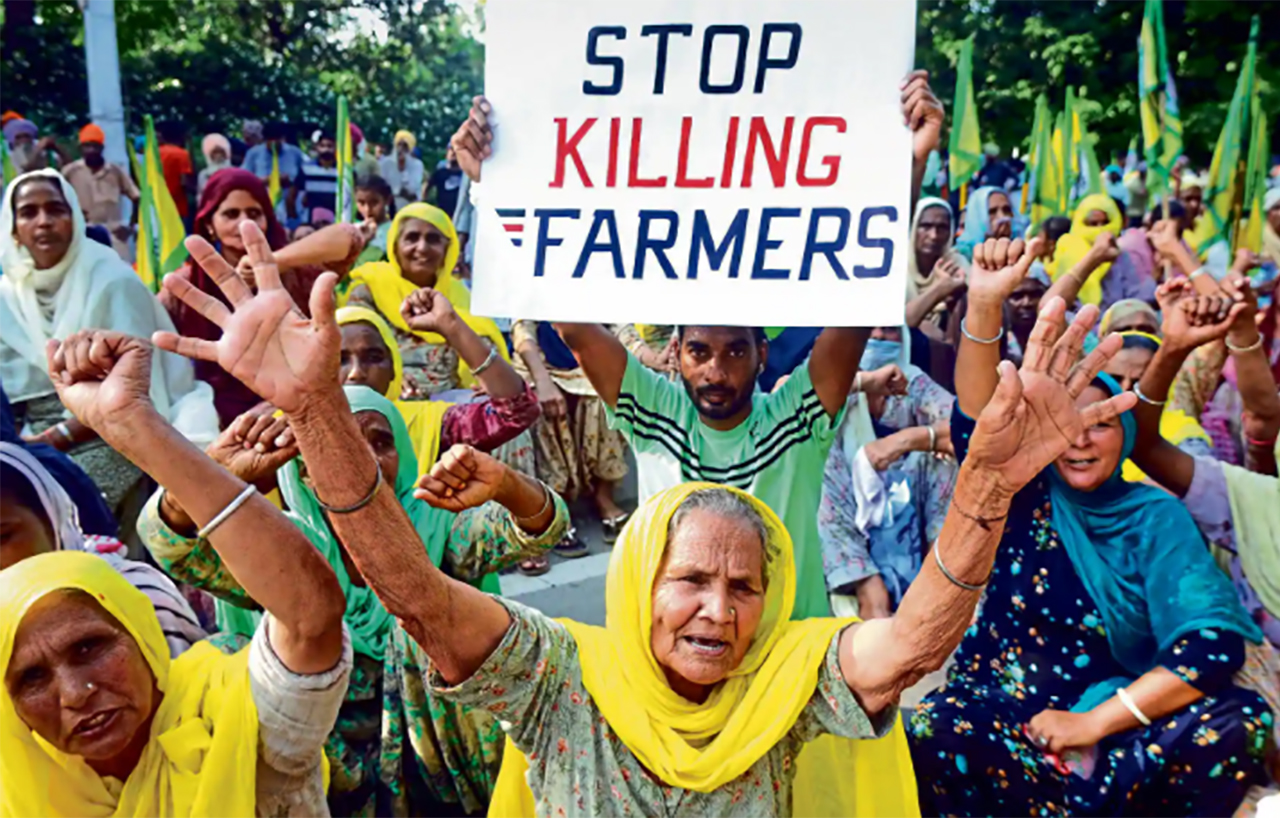 These protests will be in coordination with the national call for Mahila Kisan Divas given by the Samyukt KisanMorcha (SKM). Thousands of women across the country will participate in the marches to Raj Bhavan, dharnas in state and district capitals, protests in the district and local levels, etc. which will be organised on January 18.

The Modi government has launched a full scale attack on the survival of a large section of our population. The three farm laws will further worsen the situation for women whose lives are already facing a severe crisis due to sky rocketing prices of essential commodities which has made it impossible to make both ends meet. The new Essential Commodities Amendment Act will aggravate the situation. The targeted public distribution system is in disarray. The distribution of free food grains has been discontinued since December. Regular food grains distribution through the ration shops has been disrupted. The NFHS5 shows that in 13 out of 22 States, child stunting has deteriorated over the preceding 4 years. Likewise, child wasting across 11 states and underweight children in 14 states has shown deterioration.

As schools are closed, alternate arrangement for Mid-day meal to students has not been made. ICDS services are also affected badly. Conditions for availing free ration during COVID crisis coupled with loss of work will further aggravate the malnutrition, hunger and starvation death.

Even after all the tall promises regarding provision of work made by the central government, the reality is that no work is available. MNREGA work has been stopped. Women in the unorganised sector have been demanding the implementation of the Urban Employment Guarantee Scheme as the means of livelihood have shrunk during this pandemic. Indebtedness has increased manifold. This has had a devastating impact on the lives of poor families living on the verge of starvation.

Privatisation of the public health services have left the people in a helpless situation. Loans of Self Help Groups are not being waived despite numerous appeals and they are constantly harassed, abused and threatened by the MFIs. Recent NCRB data has shown that violence against women is increasing. This is also due to the patronage that the culprits receive from the ruling regime.

Instead of addressing these issues which have got aggravated during the pandemic, the BJP government is pushing ahead with its pro-corporate, anti-people agenda. The arrogance and heartlessness of the Modi government has been explicitly revealed in its adamant refusal to repeal the three farm laws. Lakhs of farmersincluding women are protesting for over 40 days on the five borders of Delhi in the biting cold and rain. Over 60 farmers have lost their lives.

Women drive tractors, shout slogans, sing songs of struggle and are staying at the borders. In the past few weeks, they have braved all odds and stayed put despite Delhi’s chilly and rainy winter or the lack of toilets, privacy and hygiene. Women are the first to be directly affected in situations of crisis. They are forced to sell their jewellery or other household valuables to tide over the family crunch, cut kitchen expenses or make several other compromises to clear debts. Families where men have committed suicides, leaving their mothers, wives and daughters behind, are in a miserable condition. Denial of MSP and corporate take-over of agricultural land will force women to work as bonded labour in their own fields. The provisions of the contract farming law will eventually force land-owning farmers to give up their agricultural lands leading to landlessness. This will indirectly lead to disinheriting women from whatever little land rights that they would have. The farm bills will increase economic challenges and plunge the future of the rural population in deep distress.

In the light of this worsening situation, the national women’s organisations have decided to observe the Mahila Kisan Divas at the call of the Samyukt Kisan Morcha on January 18, Thousands of women will participate in this protest to express solidarity, strengthen the ongoing farmers’ struggle for repeal of the three farm laws and jointly take up issues of food security, employment, access to health facilities, cash transfers to migrants and women, deepening agrarian distress, and opposition to anti-farmer laws, anti-worker labour codes.