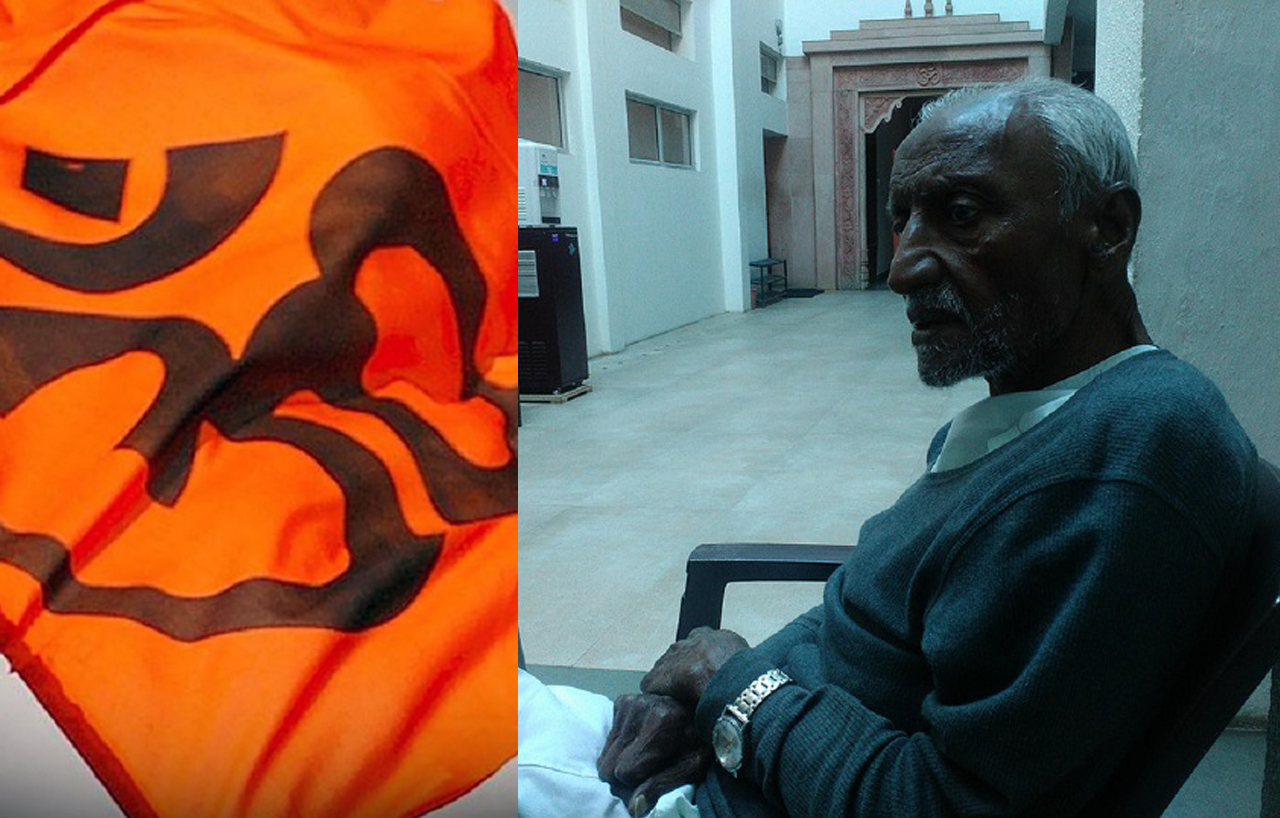 In January 2020, a two member team from Aamra (a study group on Conflict and Coexistence), visited RSS headquarters at Nagpur. This part of the report is about their conversation there with Shri Krishna Matlog, a RSS Pracharak, who had spent several years in Eastern India, including West Bengal.

Shri Krishna Matlog is a Pracharak (preacher) for the Rashtriya Swayamsevak Sangh (RSS) in Eastern India. Our conversation with him took place on January 31, 2020 at about 1 pm, at the RSS headquarters in Nagpur. He was in West Bengal from 1981 to 2015. In 1972, he was given the task of strengthening the RSS organisation in Guwahati. For about 10 years he was associated with the work of spreading Hinduism in the states of north-east India. According to him, “Christian missionaries wanted to make the Northeast a Christian land. Our job was to spread Hinduism among the locals.”

Aamra: We have come from Kolkata. We heard that you were in Kolkata for about twenty years.

Sri Krishna Matlog: Yes I was.

Aamra: Your Bengali is very good. Where is your original home?

Aamra: So you’re from Vidarbha. Nagpur is like Mecca to Hindutva politics. Don’t you feel proud about it?

Sri Krishna Matlog: The whole of India is Nagpur.

Aamra: Will it become one? Or has it already become so?

Aamra: You were in West Bengal for so many years. There must have been various experiences while being in charge of the RSS in eastern region. You have seen both the CPM and the Trinamool ruling the state. Can you share your experience?

Sri Krishna Matlog: As a political party, the CPM had a very strong organization. Their ideology was against Hinduism. They had established a cadre-raj, and it was very difficult for the RSS to work. They would try to stop any program around Hindutva.

Aamra: You remember the times during the CPM’s rule?

Sri Krishna Matlog: Yes, it was during the Left Front period.

Aamra: What is the situation now, in terms of conducting your activities?

Sri Krishna Matlog: Now CPM is no more the ruler. They have no power to stop our activities. Now there is Mamata Raj, and Mamata has no ideology. Mamata’s party is not a cadre-based party. (Suddenly suspicious) Are you a journalist?

Aamra: No, I am associated with research work, I study Conflict and Coexistence in society.

Sri Krishna Matlog: Why have you come here?

Aamra: We went to visit Deeksha bhoomi this morning (where Ambedkar was initiated into Buddhism). We also came here to see some books in the library. We want to buy a few books.

Aamra: The book by GD Savarkar’s translated by Golwalkar, ‘We, Our Hour Nationhood Defined’. Is it available?

Sri Krishna Matlog: It was written in Marathi, the name of the book is ‘Rashtra Mimansa ‘.

Aamra: There is a translation of it by GD Savarkar. To the workers of the Sangh, however, it is equivalent to ‘Gita’.

Sri Krishna Matlog: You would have got it in Kolkata.

Aamra: We didn’t get it. Can we get a copy of ‘Rashtra Mimansha’ here?

Sri Krishna Matlog: See if you get it! Where are you staying here?

Aamra: At a friend’s house. We will stay there for a few days. We would like to come here again. We will probably not find the library open at this time…

Sri Krishna Matlog: No, you won’t.

Aamra: We have heard that when Prime Minister Narendra Modi was the Chief Minister of Gujarat, he had differences with the RSS. Did he work independently?

Sri Krishna Matlog: Narendra Modi belongs to the RSS. He was a pracharak. Later he went into politics.

Aamra: What were the differences?

Sri Krishna Matlog: No, no, no. Why would there be any differences? The everything is well thought out and planned by the RSS. Do you know anything about the way our Sangh functions?

Aamra: Not in great detail, I’ve read some books about it though.

Aamra:  Like the ‘Vanavasi Kalyan Parishad’, for those who work among the tribals?

Aamra: What type of work does the Vanavasi Kalyan Parishad do to turn the tribals into ‘Hindus’?

Sri Krishna Matlog: But they are already Hindus.

Aamra: Then why do they need to ‘convert’ again?

Sri Krishna Matlog: It is not ‘conversion’. It’s ‘Ghar wapsi’ (returning home): from Christian to Hindu.

Aamra: This work is done by Vishwa Hindu Parishad. They are part of the Sangh as well?

Aamra: We saw a group of Bajrang Dal members from Andhra Pradesh here. Are they also a part of the Sangh?

Aamra: And those who took to streets to preserve and protect culture? On February 14, they – the Hanuman Sena and other groups organize programs in different parts of the country. Are they part of RSS as well?

Sri Krishna Matlog: I don’t have all the information. However, the RSS is always with those who are there to protect the country and its culture.

Sri Krishna Matlog: To us both are the same.

Aamra: There is Bajrang Dal in Orissa too. Those who oppose the Christian missionaries, aren’t they?

Aamra: So, Dara Singh is an asset to you?.

Aamra: Do you agree with the way the current central government is functioning? The laws it is coming up with?

Sri Krishna Matlog: Yes, we do.

Aamra:  See, the names of 19 lakh people were dropped from the NRC in Assam, out of which 12 lakh were Hindus. The central government brought amendments to the citizenship law. People are protesting across the country against it. What is your opinion on this?

Sri Krishna Matlog: This is where the central government and the RSS should be involved – when the matter is concerns the Hindus. But then (giving a suspicious look) the RSS does not give statements on such political issues.

Aamra: Do you mean that the RSS has nothing to state on this issue? However, for one thing, the Sangh had a role in changing the thoughts of ‘the people’. I mean, their thoughts on the society, culture etc. Do you train people on such matters?

Sri Krishna Matlog: It has been going on since the beginning of the Sangh. Have you seen any branch of the RSS? The activities in a Sakha?

Aamra:  I’ve seen some such activities in Dhanbad.

Sri Krishna Matlog: No one knows what RSS will do, and where. So there is a lot of speculation. They presume that Sangh can be paramilitary, or this or that. When you directly participate in the activities of the Sangh, you will understand what the Sangh is.

Aamra: Militarization of youths, half-pants, physical exercise – are all these preparations by the Sangh for the impending conflict?

Sri Krishna Matlog: Yes, we always have to be ready for all situations.

Aamra: He taught the Muslims in Nagpur a lesson in 1930 through the Sangh, didn’t he? Swayamsevaks guarded him with sticks.

Aamra: Tell us a bit about yourself. Your education and other things…

Aamra: Don’t you have a family?

Sri Krishna Matlog: I did have a family. I was the eldest son. But those of us who are pracharaks, like Narendra Modi was one, can never get married. I didn’t either.

Aamra: But Narendra Modi did marry.

Sri Krishna Matlog: At a very young age, when he didn’t even know what marriage was. At that time that was the norm. But when he grew up, realizing that this was not his path, he left the married life and followed the principle of the Sangh. He became a pracharak. He lived here. I was here too at that time. Since there was no family, we had much less burden in life. There was no need to save money for anyone.

Aamra: That’s true. Well, how can everyone be brought under the Sangh’s idea of cultural nationalism in India?

He didn’t answer. I repeated again, this time in Hindi.

Sri Krishna Matlog: That is our path. Slowly people will come around when they understand it. I was in Kolkata for a long time. I sat there with the CPM activists. They said that they did not know all this.

Aamra: Were they convinced?

Sri Krishna Matlog: Yes, they were. They were also dedicated workers. They said they did not know these things. It would have been better if we had known that earlier.

Sri Krishna Matlog: State level, district level. Even talked with members of the Central Committee. But I can’t take their names.

Aamra: Can’t name even a single one?

Sri Krishna Matlog: Our purpose is the same.

He smiled softly in reply. Most of our conversation now was in Bengali. A person watching us was standing at a distance, probably not understanding what we were talking about. We started again.

Aamra: Do you think India will one day become a Hindu state?

Sri Krishna Matlog: It is a Hindu state.

Sri Krishna Matlog : There is no necessity to announce.

Aamra: There is no need to change the constitution?

Sri Krishna Matlog: Change of constitution? It can be just like the change done in Citizenship Law. Constitution is for the people, the people are not for the Constitution.

Aamra: The constitution is for the people. But those people include all, of every religion, of all language.

Sri Krishna Matlog: As I said earlier, RSS and BJP are working towards the same goal.

Aamra: And the goal is clear, Hindu Rashtra. Right?

Sri Krishna Matlog: Of course. But what do you do?

Aamra: That we told you. Research work. We try to understand both differences and love between people.

A middle-aged man had by then come to where we were talking. He asked Shri Krishna something in Marathi. Krishna answered him.

Sri Krishna Matlog: Now I have to get up.

Aamra: Thank you for giving us your time.

The middle-aged man looked at us and in a rough tone asked us in Hindi:

The middle-aged man: You talked far more than the allotted time. Have you recorded anything? I saw you taking pictures.

Aamra: We took his picture after asking him.

The middle-aged man: What are you here for?

Aamra: We have already told him, ask him.

He went to the reception desk and asked something to the person stationed at the booth. The person replied that he could not understand anything as we were speaking in Bengali.

The middle-aged man: Okay. Now it’s time for you to go. He needs to take rest.

(That day, once again, we made an attempt to visit the library. We arrived at the library. Some more people had come there. But we knew that we were being watched. A volunteer with a saffron towel around his neck was following us. So we came out.)