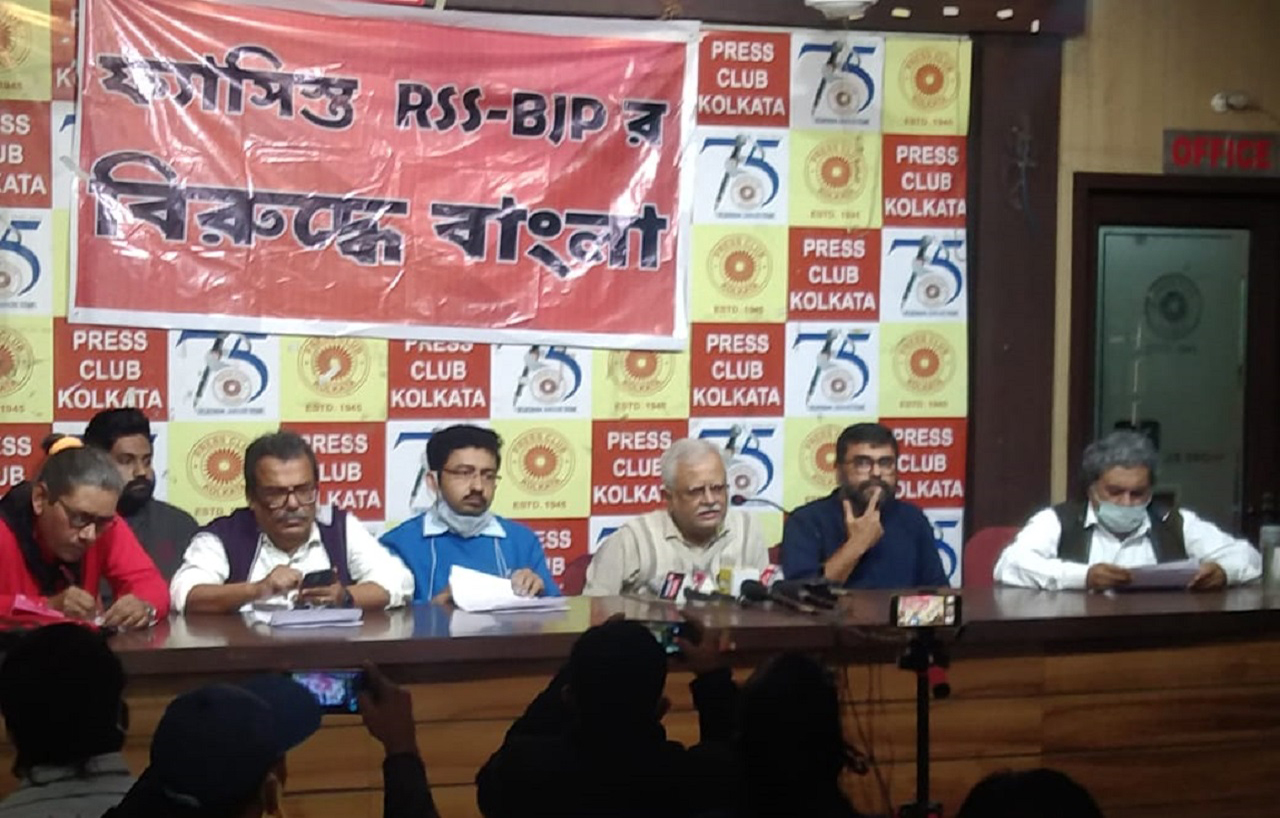 ‘No Vote to BJP’ — a peoples’ campaign launched in Kolkata

A section of left and democratic activists from West Bengal have launched a campaign under a forum named ‘Bengal against Fascist RSS-BJP’, urging people of the state not to vote for the BJP in the upcoming assembly polls. Today, at a press conference held in Kolkata, the forum members called out the BJP as the most evil, dangerous and anti-people political force, that is, desperate to “seize power” in Bengal. A report.

Kolkata: A forum consisting of activists of various people’s movements and secular-progressive camp, today, announced an anti-fascist campaign during the run up to the upcoming assembly election in the state with the slogan of “No Vote to BJP”, at a press conference held in Kolkata. Alongside exposing the BJP-RSS, the campaign will put forward a people’s charter of demands, so that people make an informed and effective decision in their own self-interest and decimate the BJP in the ballot box too, the forum said in its press release. The forum sees its No Vote to BJP campaign as not an end in itself but only as a part of the ongoing anti-fascist struggle in the country.

Recalling the growing agitation during the pre-lockdown period against the Narendra Modi-Amit Shah regime’s communalised citizenship matrix– CAA-NRC-NPR, the forum wants to regain the momentum in the context of the upcoming assembly election before it is too late. The organisers reflected the sense of urgency by pointing to BJP’s rapidly growing vote-shares in Bengal that has not only established it as the main opposition to TMC in 2019 general election but also increased the violent show of strength by the larger Sangh Parivar outfits both in Kolkata and the districts.

Prior to today’s press conference, on 4 January, activists from Kolkata and various districts of West Bengal, had held a public convention at the Bharat Sabha Hall in central Kolkata to exchange views, and had announced the formation of the forum.

The resolution passed by the convention focused on the very fascist nature of the Narendra Modi regime by highlighting its successive onslaughts on the secular democratic edifice of Indian federal republic by sweeping attacks on the rights of the minorities and systemic subversion of the independent constitutional institutions including judiciary and media. The declaration described such moves as the testimony to the agendas of the crony corporates and the RSS-led majoritarian religious nationalists to fast forward the pluralist polity’s turn towards a one nation-one election-one party-one leader rule.

The peoples’ campaign plans to build district wise anti-fascist networks with The No Vote to BJP slogan, in order to spread their campaign across the length and breadth of the state. The forum also announced a people’s rally to be held in Kolkata on 10th March. On 13th January, the forum will organise a sit-in protest in solidarity with the farmers’ struggle at Delhi borders, at the Moulali crossing in Kolkata, from 2 pm.