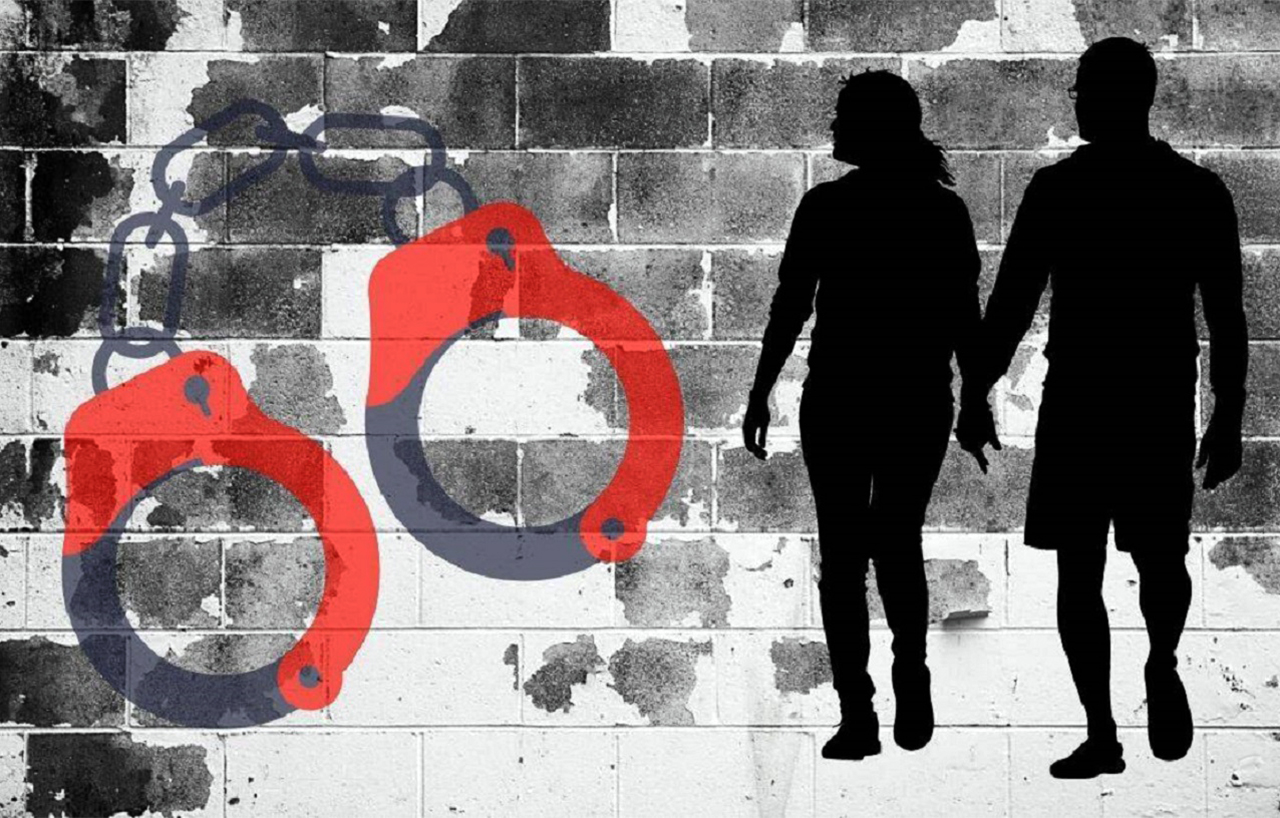 Since the Uttar Pradesh (UP) Government has passed The Uttar Pradesh Prohibition of Unlawful Conversion of Religion Ordinance 2020 on 27th November 2020, there have been strange incidents of young people walking together or simply knowing each other being picked up and charged by the UP police. This is what young people ask about this Ordinance –

At the age of 18, we can vote for our councillors, MLAs, MPs. At 18, we decide who will make and implement policies that affect us, our loved ones, our community, our country. At 18, we are supposed to be mature enough to responsibly exercise our voting rights. However, whether at the age of 18 or at the age of 50, we are not allowed to decide our romantic partners or who to marry.

Young people feel trapped, first the family and community and now the State and the government is curbing their freedom of choosing their partners. 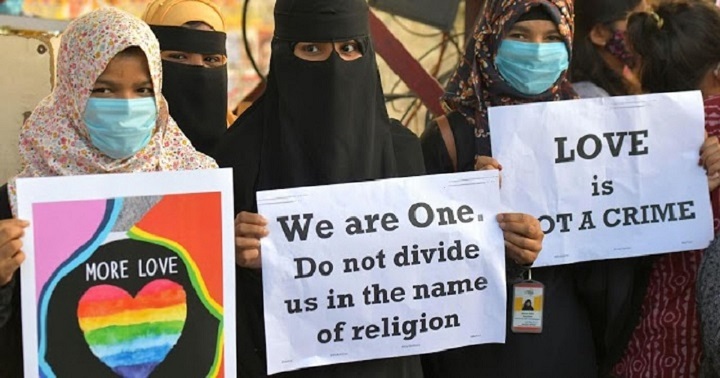 A petition has been signed by 133 organisations and endorsed by 858 people from different states of India, belonging to varied professions, demanding immediate scrapping of the unconstitutional and patriarchal Ordinance, popularly seen as a step to curb ‘Love Jihad’ conspiracy.

At the age of 18, we can vote for our councilors, MLAs, MPs. At 18, we decide who will make and implement policies that affect us, our loved ones, our community, our country. At 18, we are supposed to be mature enough to responsibly exercise our voting rights.

If a Hindu woman chooses a Muslim man as her romantic partner, it is considered a crime in society and if they marry and the woman converts to Muslim religion, it is assumed that the Muslim man has forced her for conversion. In inter-faith and also in inter-caste marriages, it is taken for granted that the other person is bound to cheat you or dupe you and that the person you have chosen to be your partner has some wicked, ulterior motive to `make’ you fall in love.

In homo-erotic romantic relationships, often we hear how lesbian couples are being tortured by biological family, community and the police often acting on behalf of the family. Lesbian women, gay men, trans persons face severe repression at home for transgressing gender norms, aspiring for intimate and social lives beyond the compulsory Brahmanical hetero-normative family system. Many of us have similar painful and traumatic experiences.

The Uttar Pradesh Prohibition of Unlawful Conversion of Religion Ordinance 2020’ passed on 27th November 2020, seeks to sanction the violence committed by family-religion-communities on people who transgress boundaries of religion, caste, gender and sexuality in choosing romantic partners.

This Ordinance is simultaneously an attack on any person who wishes to change her religion. According to the Act, every conversion is illegal. The conversion requires the prior sanction from the District Magistrate. The Ordinance also says that `reconversion’ to a person’s previous religion is not illegal even if done forcibly. This is the gateway to what is termed `ghar wapasi’.

Over the last few years, the Hindu right-wing groups and right-wing led governments have accelerated their attempts at whipping up paranoia about inter-faith romantic relationships. They deliberately call it ‘love-jihad’, equating the Muslim lover with terrorism, while there have been no incidence or statistics that even the right-wing gangs or governments have been able to furnish.

On the other hand there are innumerable instances where the State and community have wrongfully assaulted adult couples when they engaged in inter-faith romances and marriages. Local Panchayats have even put young couples to death for transgressing community norms. Most recently in the Shefin Jahan case, 2018, where finally the Supreme Court held that right to change faith is fundamental right of choice and also observed that consent of the family,  community,  clan is not necessary once the two adult individuals agree to enter a romantic partnership.

The UP ordinance is a direct threat to the right to privacy of an individual, a citizen. By making it mandatory to publicly inform the District Magistrate and being subject to the role of police enquiry and subsequent investigations, the BJP-led government in UP is depriving citizens of not only personal autonomy but also  freedom of choice in case of intimate relationships and religion. By making inter-faith marriages and any religious conversion a public matter to be sanctioned by the State, the Government is directly entering the personal lives of individuals and also controlling the social, cultural and political aspirations of people.

Conversions from one religion to another cannot be a matter of administrative and public scrutiny. It violates Articles 21 and 25 of the Indian Constitution that protects right to Life and Personal Liberty and freedom of conscience and free profession, practice and propagation of religion. By impeding on these fundamental rights the State is attacking self-determination of people. This law is against the belief, spirit and political will of the Dalit and Ambedkarite communities, where religious conversion to Buddhism is a common practice. The mass conversion of Valmiki community to Buddhism in Ghaziabad, protesting the gang rape in Hathras stands in direct contradiction of the law.

Why is it that those in authority and with power hate love so fiercely? Why are they full of mistrust in matters of the heart? It is notions of Hindu supremacy that foster and promote politics of hatred. It takes for granted that a Muslim is a second class citizen in India, as is evident in the imposition of the Citizenship Amendment Act last year. We witnessed the repression unleashed on those who stood up to defy these draconian measures that are aimed to take away rights of citizenship from thousands and thousands of Indians. The UP Ordinance is yet another control mechanism to target the Muslim community, which is being unleashed every day, ironically even when the two people getting married are both Muslims. Merely because there is this weapon available to terrorize a community.

Who are these forces that claim to patronize and protect women while pitting communities against each other? The BJP led Indian State through the Triple Talaaq Act, have been trying to infantilize the Muslim woman, now through the UP Ordinance it is infantilizing the Hindu woman. Instead of giving the power of going to the court only to the `aggrieved’ woman, the Ordinance in fact also allows her parents, siblings etc. to complain against the man concerned, which is open to serious abuse, in cases of consensual relations between the man and the woman. Where is women’s fundamental right and autonomy to choose and decide her intimate, social and political life? This Ordinance propagates the idea that women are properties of communities and that particular religious-caste community can only control women’s sexuality, desires and aspirations. It takes away the fundamental right of autonomy as a human being to decide about one’s own life. It puts in danger the lives of young women and men. It is likely to be replicated in many other states, if not opposed by the youth and other sensible people.

This Ordinance and many other similar Acts in other states are threatening to erase the small and big achievements of the women’s movements and human rights movements. They are actually seeking to reverse whatever forward steps our society has been able to take in the last decades. The women’s movement, while welcoming the Special Marriage Act, that enables inter-faith marriages, has also critiqued its requirement of publicly displaying the names and photographs of the couple 30 days prior to the marriage. It is this requirement that has made interfaith young couples vulnerable when right-wing love-haters swoop down upon young couples.

We are witnessing increasing moral policing, humiliation and violence by right wing vigilante groups like the ABVP, RSS and Vishwa Hindu Parishad on young people in parks, streets, public places in the city and in villages, on Valentine’s Day and other social events. The Kiss of Love protests, 2014 originated out of an attack and public shaming of a young couple in a park at Kozhikode, Kerala. The deployment of anti-Romeo Squads in 2018 were but a frantic move of the BJP- led Government to control autonomy, sexuality, mobility of anyone and particularly young people. The UP ordinance clearly gives license to communities, clans, families and most importantly self-appointed right wing groups to launch mob attacks on young people, restrict mobility of women, and intervene in their friendships and relationships.

As feminists who have been challenging Brahmanical, hetero-normative family structures, who have been fighting against communalism, caste-patriarchy for many decades now we strongly challenge the authoritarianism of the Indian State to pass an Ordinance which takes away fundamental human right and dignity. We defy such patriarchal dictatorship of the Hindu right-wing state that imagines that it can control Hindu, Muslim, other minority communities, oppressed castes, women, queer and trans* persons by the passing of such retrogressive laws.  Let us resist the assault on our fundamental right to decide who we love and who we marry, whether to live in wedlock or outside. Let us be free to love. Let us not allow them to control our emotions, our passion, our desires, our sexuality. Every step we take today is a step towards a society of our own making where there is dignity for all.

The petition above has been signed [pdf of endorsement attached below] by 133 organisations, of which some are Akshara Women’s Resource Centre, Bebaak Collective, Feminists in Resistance, Forum against Oppression of Women, Madhya Pradesh Mahila Manch, Maitree- a network of women’s rights organisations and individuals in West Bengal, North East Student Network, People’s Union for Democratic Rights, Pinjra Tod, Saheli Women’s Resource Centre, Women against Sexual Violence and State Repression. It has been endorsed by 858 people from different states of India, belonging to varied professions from engineering, medical science, to journalists, teachers, lawyers, software professionals, textile designers, entrepreneurs, artists, writers, researchers, film makers have signed the statement and by academicians in Universities within India and abroad.