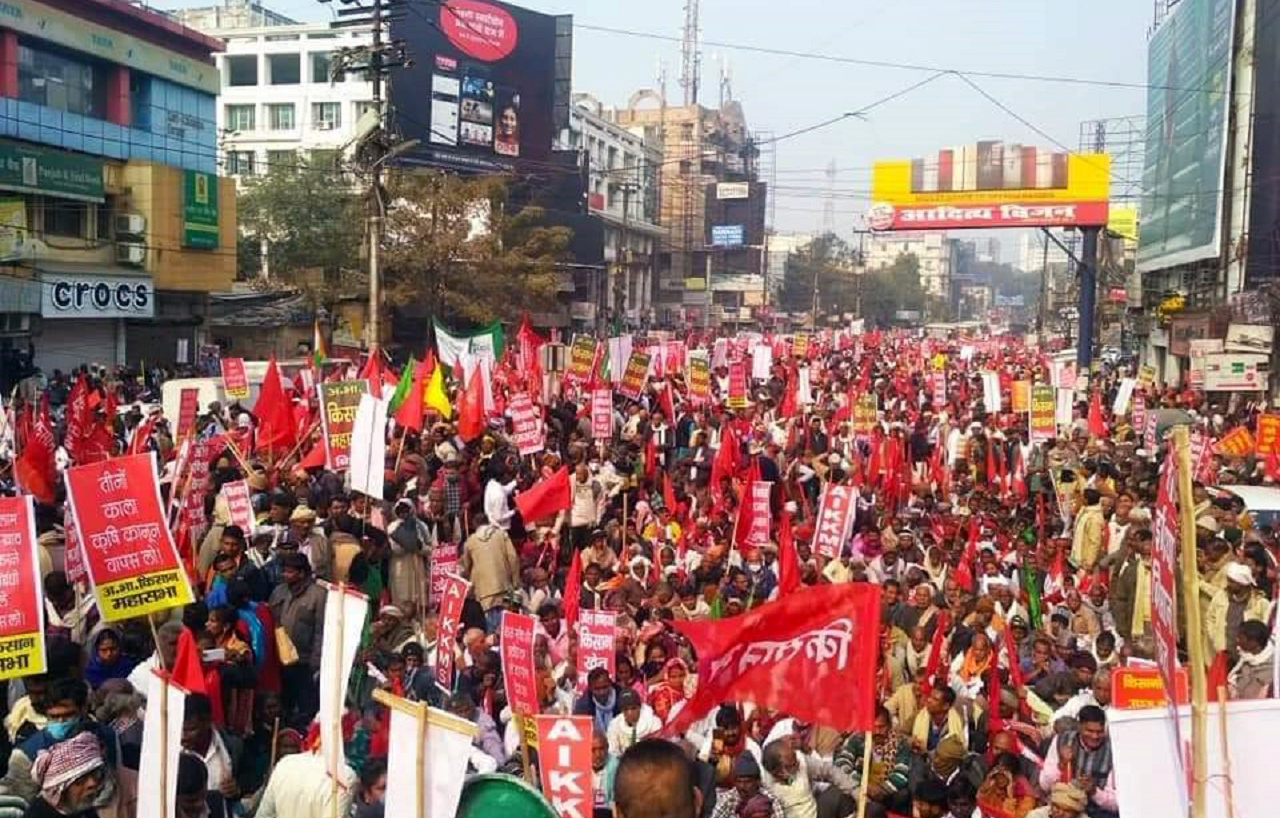 Solidarity to Peasants struggle in Delhi spreads, a report from Patna.

Yesterday, the Modi government seemed to have mellowed down from its stubborn stand during the sixth round of negotiation with farmer union leaders. The government agreed to scrap the controversial Electricity Amendment Bill 2020, aimed to abolish free or subsidised power supply to farmers for irrigation purposes, and decriminalise stubble burning by doing away with laws that imposed huge penalties on farmers who burn paddy straw after harvest to clear the field for the next round of cultivation. The remaining two, the most contentious issues and the main demands of the farmers, of repealing the three Farm Laws and a legal guarantee for continuing with Minimum Support Price, still remains unresolved. But what was noticeable was the conciliatory tone and gestures of the government, which till now, have only vilified the over month long protests.

This change in the Modi government’s attitude was brought about by the spirited and heroic struggle being carried on by the thousands of farmers camping in chilling winter on highways at the borders of the country’s capital. And despite all efforts by the government, its puppet mainstream media, agricultural experts on its payroll, its fake news spreading IT cells, the farmers’ protests instead of subsiding has been drawing in massive support from nearly every section of the people all over the country. What started as protests by the farmers from mainly Punjab and to some extent from Haryana, has by now, spread into a nation-wide peasants rebellion against the Modi government and has  started taking the shape of a people’s movement against the corporates. Massive farmers’ protests in solidarity of the agitation and support of the demand to repeal the corporate friendly Farm Laws are happening in states all over the country. The contradiction between the farmers and the corporates is being laid bare on the streets of the cities and towns across the country. The government and its corporate friends are for the first time facing serious challenge to their neo-liberal reform agenda from the masses and they appear unnerved and are now trying to contain the flame of rebellion from spreading further, which these protests have ignited.

Two days ago, on 29th December, a huge spirited rally by various left affiliated farmers unions in Patna, was only a glimpse of how agitated and angry the farmers across the country are with this government. The Police in Patna resorted to heavy lathi charge on the farmers’ rally further alienating the government in the process. A ground report by Anish Ankur from Patna on the rally. 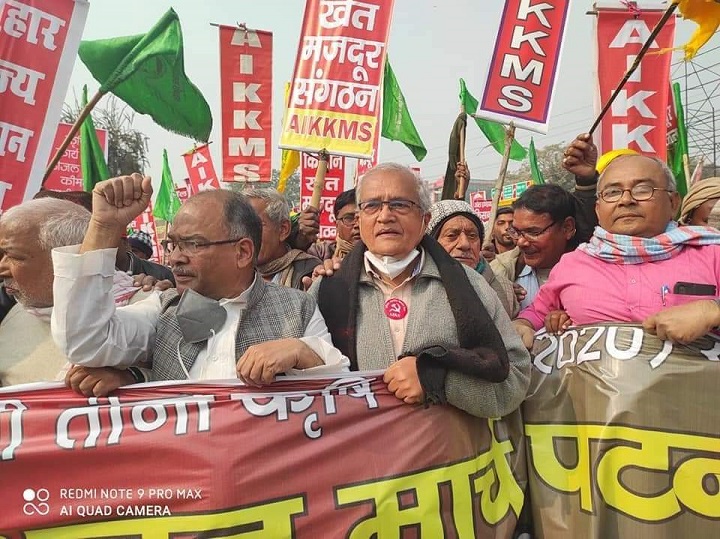 A huge procession of farmers from across Bihar gathered at the historic Gandhi Maidan in Patna, the capital of Bihar on December 29, 2020, as part of the ‘Rajbhavan Abhiyan’. The call was given by the Bihar unit of AIKSS (All India Kisan Sangharsh Samiti), comprising about 25 farmers’ organizations. Initially, mostly peasant organisations of different left parties were the main constituents, but gradually various local and issue based farmers’ associations too came under the umbrella of AIKSS Bihar unit.

Never in the recent past, such a militant and spirited farmers’ protest was held in Patna.  Farmers’ organisations had been  preparing for the last 15 days for the program, and farmers from almost every nook and corner of Bihar gathered at Gandhi Maidan. Different farmers’ organisations coordinated amongst themselves for the 29th December protest rally. All India peasant leaders physically participated in the rally and had come to Patna just for this reason.

The Patna administration, unnerved by the massive gathering, closed all the gates of the Gandhi Maidan, so that the rally could not come out of the ground and proceed towards the Governor’s House. However, young peasant activists broke downal gate on the south side (Gate no 10) of the ground. The protest rally came out and  proceeded towards Raj Bhawan. The Police tried to prevent the procession near JP roundabout, but did not succeed. The farmers were not only in huge numbers, but also not ready to allow the police to dictate terms to them. Police barricades were set aside by the protesters. Sensing their agitated mood, the police didn’t try to prevent the farmers. Farmers were raising slogans against the three agricultural laws. The city-sky reverberated with their slogans :“Kisan virodhi krishi kanun wapas lo (Roll back the anti-farmer agricultural laws), “Ambani-Adai ki Gulami Chhodo” (Stop being stooges of Ambani-Adani) ‘Corporate Bhagao, Kheti Bachao’ (Save agriculture by driving out corporates). Slogans were also raised against Narendra Modi, Amit Shah and Nitish Kumar. 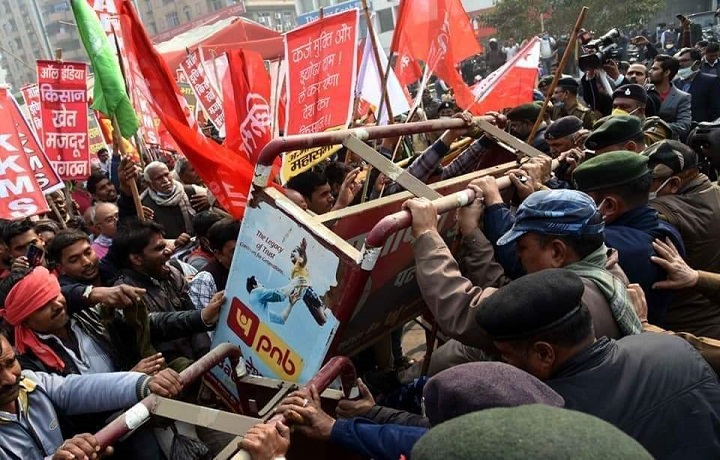 It was such a huge rally, that when the front of the rally was near the Dak Bunglow crossing, the heart of Patna city,  the rear end was still inside the Gandhi Maidan, about 1.5 km away. There was a sizable police presence at Dak Bunglow crossing, and the police didn’t allow the procession to proceed further. This led to a scuffle between the farmers and the police. The police resorted to lathi charge and about a dozen peasant activists were injured. 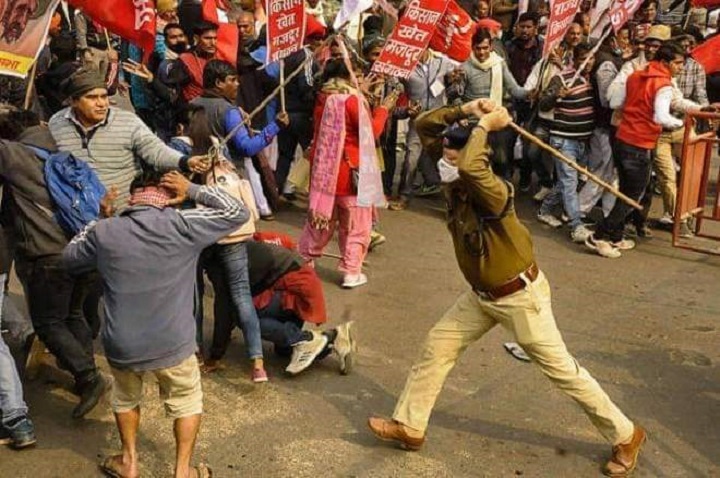 On the east side of the road, a protest meeting started on a truck. When Kisan Sabha leader of Maharashtra Ashok Dhawale was speaking, the police lathi charged on the opposite side of the road. After the lathi charge, farmers became more agitated and started to retaliate. For about half an hour, the scuffle continued. In the meanwhile, additional police forces with riot gears landed at the site. It seemed that police were preparing for a bigger action, but the farmers too were in no mood to return back.

At this moment, the state leaders of Kisan Sabha rushed in and tried to pacify the agitated  farmers.The police force also showed restraint. The meeting was allowed  for another two hours, and it was was addressed by Rajaram Singh, convenor of AIKSS Bihar unit, Ashok Kumar, Vinod Kumar Jha, Lallan Chaudhry, Ram jivan Singh, Anil Kumar Singh, Ramayan Singh, Baijnath Singh, Lalbabu Mahto, Ashok Baitha, Shambhu Singh, Mukesh, Chandrshekahar Prasad, Rambahadur Azad, Ashish Ranjan, Anand Kishore Singh, Ashok Priyadrashi, Naresh Yadav and Chhote Srivastva. Ashok Dhwale said “The huge crowd gathered here is an indication of the simple fact that the ordinary farmers have started to understand the law.” While addressing the gathering, the leader of All India Kisan Sabha, Atul Anjan said “Only those who till the land should be the sole authority to decide their future.”

A delegation of farmer’s organizations met the governor of Bihar and handed over a memorandum to him. Different political parties like CPI( ML-Liberation ), CPI and CPI(M) condemned the lathi charge on the rally.

The protest rally has not only raised the morale of farmers’ organizations in Bihar, but has also punctured the lies being peddled that the farmers in the state are not bothered about the newly instituted laws. As Bihar convener of  AIKSS, Rajaram said “This is the beginning of the farmers’ struggle in Bihar. If the situation demands, we will head towards Delhi”. 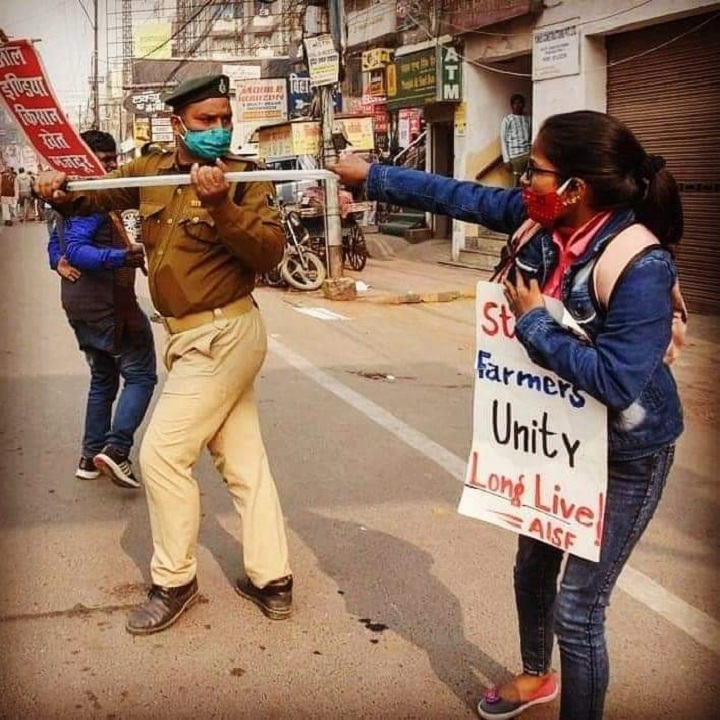