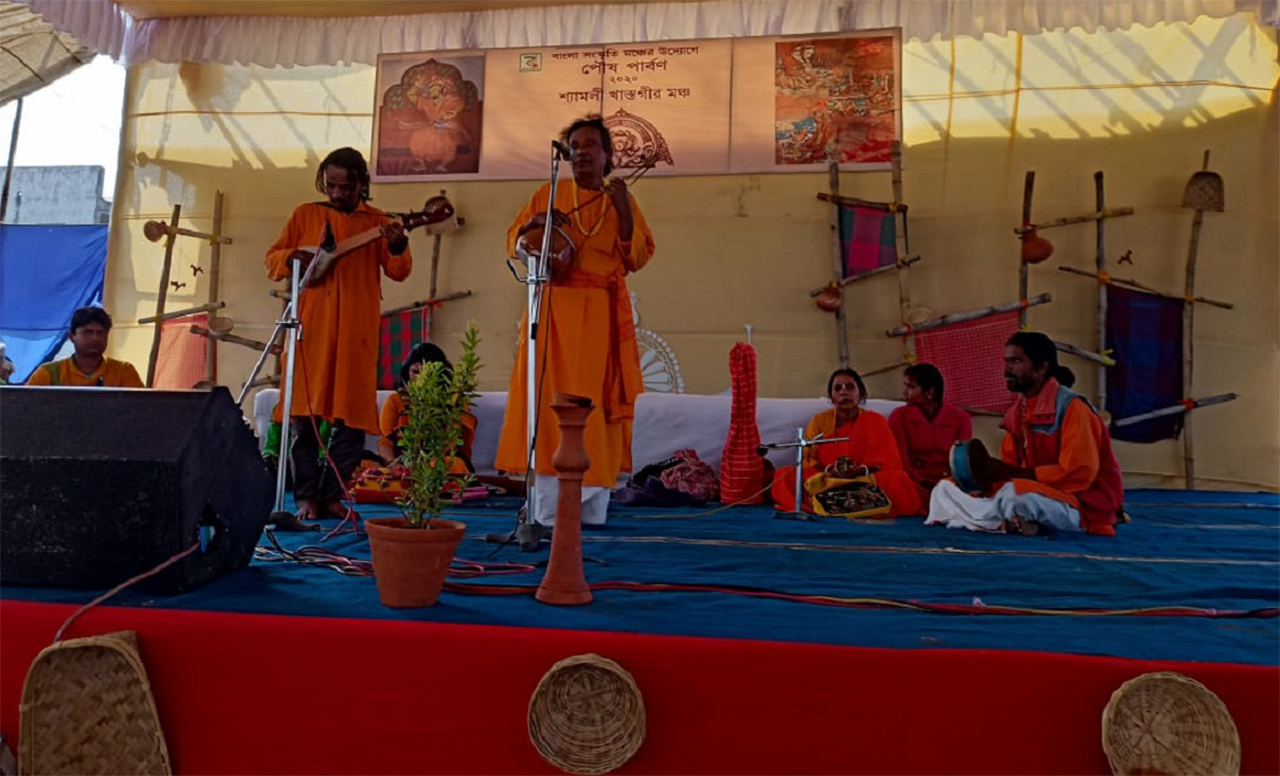 Despite Visva Bharati’s refusal, the Poush-Parbon mela held in Bolpur

The Poush-Parbon mela organised by Bangla Sanskritik Mancha in Bolpur was a clear and loud message to the Raja, in Bengal there will be ‘NO PASARAN’ to the merchants of hate and bigotry. It became an instance of people’s takeover of their own culture and history and took us back to Rabindranath’s original vision and spirit behind setting up of the Visva Bharati— presently under the clutches of right wing fanatics. But then, like Kishore, Nandini and Bishu Pagol in Raktakarabi, there are Samiruls, Manishas and Ripons still alive in Birbhum, who refuse to let the fascists and their stooges erase the dreams of the poet and turn Shantiniketan into a modern ‘Jakkhapuri’.  A report by Joyee Banerjee. 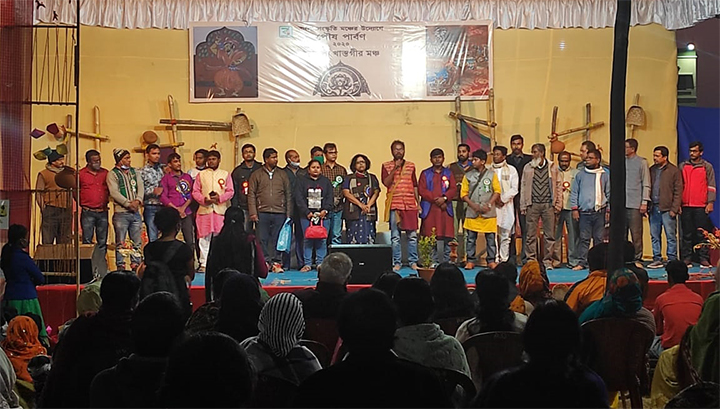 The annual Poush Mela at Shantiniketan is one the significant events in the cultural calendar of West Bengal. It came as a huge shock and disappointment, when this year, the Visva Bharati University authorities, announced their decision to not hold the mela on its grounds, thus also putting a hold on a tradition that is more than a century old. The cancellation of the Poush Mela 2020, by the VBU administration, spurred the spontaneous coming together of many social and cultural activists and organisations to organise the Poush-Parbon Mela, in the spirit of the cultural participation and exchange that have always been the crucial pillars in the foundational history of Shantiniketan, at an alternative site in Bolpur. Bangla Sanskritik Mancha, a socio-cultural peoples’ organisation, took the lead in organising the mela and it was successfully held from 23 to 25 December at the Bolpur Dak Bunglow ground. The Poush-Parbon Mela created some breathing space not only for the local dwellers, but also for the local artisans, craft-workers and traders who were worst affected from the lockdown and other restrictions imposed because of the pandemic.

The origin of Poush-Utsav goes way back to the year of 1891, much before the Visva Bharati University had come into existence. The seventh day of the Poush month in Bengali calendar was chosen to commemorate Debendranath Tagore’s adoption of the principles of Brahma-Samaj. The philosophy of the Brahma-Samaj was rooted in the ideas of secularism and brotherhood. Debendranath’s farsightedness manifested itself in his active participation to encourage practices of caring and sharing amongst the communities, beyond the barriers of religion or caste. He saw this as a crucial element in the amplification of the people’s inherent potential to create. Following his footsteps, Rabindranath later started the Poush Utsav, essentially to create a space for economic and socio-cultural exchange, as well as bridge the gaps between cities and villages, the rich and the poor, the highborn and the lowborn– in a way that would remain intricately connected with their daily lives. Now, the Poush Mela is held by the Visva Bharati University and it is one of the largest cultural events in the country that witnesses an amalgamation of cultures from not only various parts of India, but the entire world. It is one of the strongest remaining pivots of socio-cultural exchange that is free of religious fundamentalism.

Apart from being heart breaking for the people of Shantiniketan, the cancellation of Poush Mela this year seriously affected the economy of many, who depend on the annual Mela for their livelihood. The cancellation of various other melas, along with the pandemic induced lockdowns had already made their life precarious. Hence, many artisans, folk singers and small traders were looking forward to the Poush Mela to bring some relief at the end of the year. At a time when most business activities are getting back to normal, including mass religious and political gatherings, the cancellation of the Poush Mela seemed to be a conscious and planned attack, particularly on the artisan communities and small traders of Bengal, not to mention the secular, humanist culture inculcated by the Tagores. Why was this traditional century old mela cancelled? What made the university administration dismiss it, in spite of its raging relevance today?

The narrative that constitutes Shantiniketan’s culture, has already been threatened with several micro-aggressions, with undemocratic practices by right-wingers and bureaucrats. Such instances of micro-aggression include replacing the historical names of places with new ones that lie in contradiction with the thought-process and culture of the place. For example, recently a street in Bolpur was renamed after Vivekananda, which seemed irrelevant and an imposition by many dwellers, who are used to places being named after mostly nature and aesthetics. The audacity of Bidyut Chakrabarty, the current VC of Visva Bharati has been exposed several times, including the time when he declared his decision to erect a concrete wall around the historic Poush Mela ground. Disregarding the discontent of the locals, he built the wall to hijack a public property into exclusivity. His words and actions are the exact opposite of the philosophies that this place stands for. The ignorance and apathy towards the community cultures of Shantiniketan, is a measure for erasure of its identity.

Having no Poush Mela in Shantiniketan creates an emptiness that is difficult to fathom for many, especially the ones connected thoroughly with it over several years. As a blessing in disguise, the cancellation of Poush Mela by the VC united several artists, activists and locals to come forward and take action to save their identity, tradition and culture from a sustained right-wing onslaught. Bangla Sanskriti Mancha, a socio-cultural group, comprising mainly from the marginalised communities of Bengal, assembled hundreds of enthusiasts, brought together the scattered artisans and successfully organised the mela at Dak Bunglow ground. The Poush Mela, though displaced from its original home, came alive for three days at the alternative site. 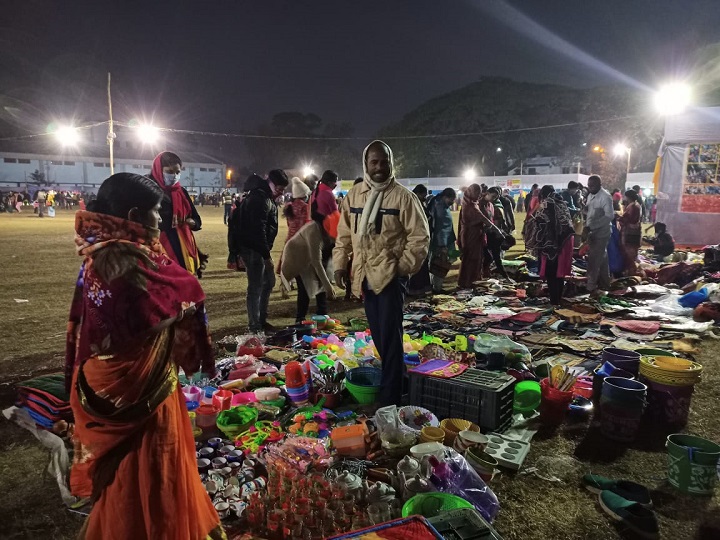 The Poush-Parvan Mela at Dakbanglo Maidan was organised within an extremely short period of around 48 hours. The organisers had to work hard with the government officials to acquire the permission, which was granted only a day before the scheduled date. As a result, the confirmed news of whether the mela was happening, did not reach a lot of people until the mela was already a day into it. Many artisans joined the ground on the second day of the three-day event. Though the organisers tried their best to publicise the mela both physically and online, their reach was significantly limited, when compared to the previous years.

The cultural programme was inaugurated by lighting a diya and watering a pot of plant, as a symbolic representation of the underlying message of the endeavour and the cause that had brought the people together. Handicrafts artist Sona Murmu, writers Joya Mitra, Shameem Ahmed and Sabujkali Sen, ex-VC of VBU, graced the occasion with their presence. Amongst the organisers, Samirul Islam, Tanmay Ghosh from Bangla Sanskriti Mancha and Manisha Banerjee, head-teacher of Labpur High School spoke a few words of gratitude and hope that had united them in this effort to make the mela happen against all obstacles. Basudeb Das Baul, who had recently hogged limelight for hosting BJP leader Amit Shah at his house for lunch, was invited with his group to start off the mela with their music and songs. And, he did, with a baul song highlighting the co-existence of Hindus and Muslims and deriding attempts to divide them.

Muhammad Humayun Kabir, a small trader from Sainthia, had his wares comprising of basic articles of everyday necessities like cups, clips, spoons and kitchen instruments, etc. spread out on the mela ground. While speaking about his feelings regarding the mela, he said that though the previous melas were more crowded, and a lot of rich buyers visited, putting up a stall was much more expensive and drained a good part of their net income. Another small trader, Sudarshan Mandal, described how he likes melas because of their carnivalesque nature– the music and laughter transform them into living organisms. Sudarshan has been going to melas held in different parts of Bengal as his chief livelihood. The Covid pandemic had cost him dearly and this mela was crucial for his survival, and of many others like him. 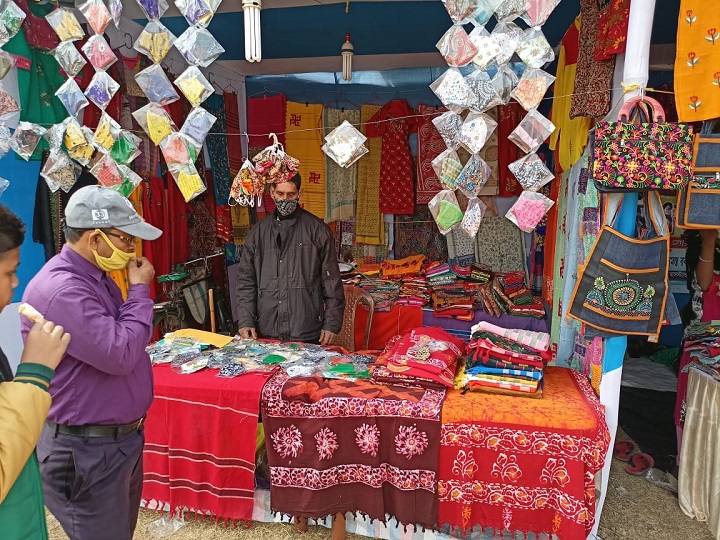 The mela also had various young individuals and groups of artists, who displayed their performances and works in the hope of building up stronger connections with each other. Struggling artists, who are trying to survive independently, found their own spaces in the mela, to showcase their skills. Though the sales or profit were far less, many participants have expressed gratitude, content and hope for having had an intimate experience with the audience. Most of all, the sheer possibility of an alternative to the state-ruled public affairs and cultural events brings hope to many, as they begin to have more access to the decision-making process than before. The congregation reverberates with the affirmation that even if the authorities abandon their people, the people will always be there by each other, for each other. A people’s takeover of their own culture and history brings us back to Rabindranath’s original vision and spirit behind setting up the Visva Bharati–now under the clutches of right wing fanatics. But then, like Kishore, Nandini and Bishu Pagol in Raktakarabi, there are Samiruls, Manishas and Ripons still alive in Birbhum, who refuse to let the fascists and their stooges erase the dreams of the poet and turn Shantiniketan into a modern ‘Jakkhapuri’. The Poush-Parbon mela was a clear and loud message to the Raja, that in Bengal there will be a loud and clear ‘NO PASARAN’ to the merchants of hate and bigotry.