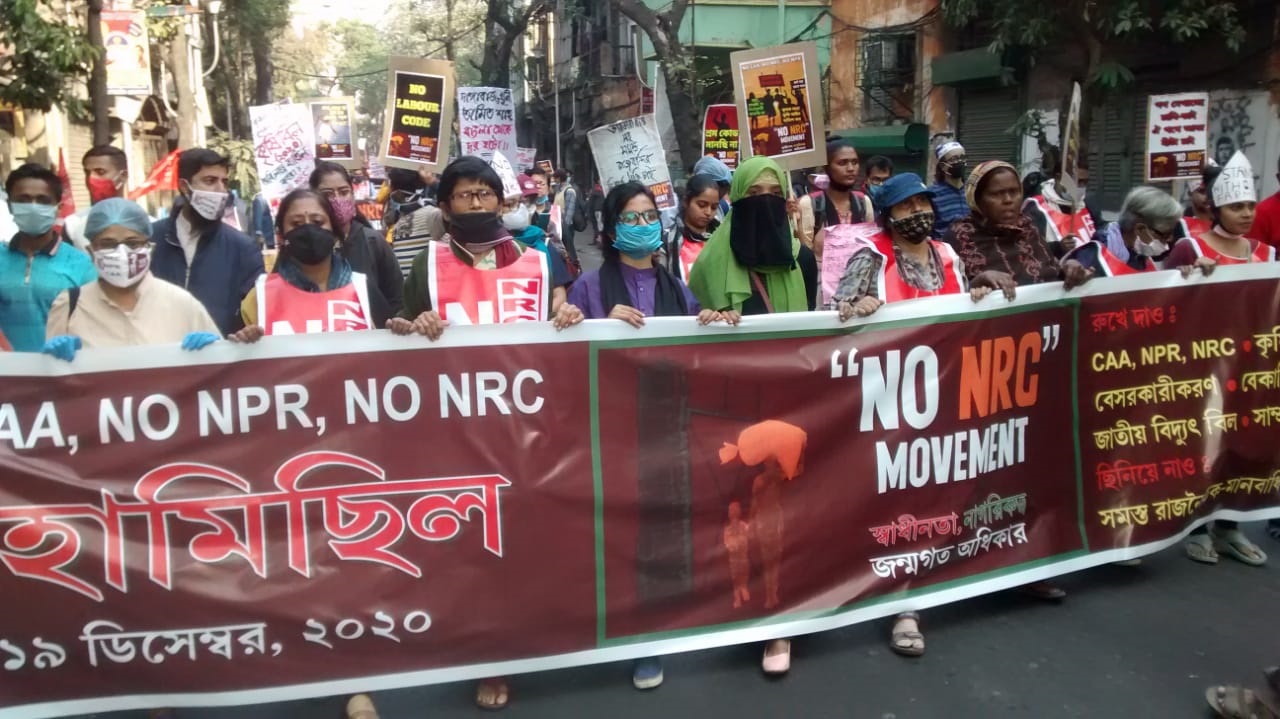 Go Back Amit Shah, protesters raise slogans in a rally at Kolkata as the Home minister welcomes turncoats from Mamata’s stable at Midnapore. A report from an anti-CAA protest rally in Kolkata by Biswajit Roy.

Amit Shah will never know Ganesh Rajbhar or Rahiman Bibi. Nevertheless, when the BJP’s Chanakya and Union Home minister netted a school of fishes out of Mamata Banerjee’s troubled water ahead of Bengal assembly polls at a big rally in Midnapore today, the teenager son of a rickshaw-puller and the middle-aged domestic help joined a much smaller protest march against him and his boss, Narendra Modi in Kolkata.

Both the participants were visibly enthusiastic in responding to slogans like ”Dangabaz Amit Shah Bangla theke Hat Uthao ( Riot-monger Amit Shah, Hands off Bengal), krisak mara krisi aain batil koro ( repeal the anti-farmer farm laws), CAA-NRC-NPR manchi na manbo na ( we do not accept the CAA-NRC-NPR). The rally was organised by No NRC Movement, an umbrella body of some left civil society groups. 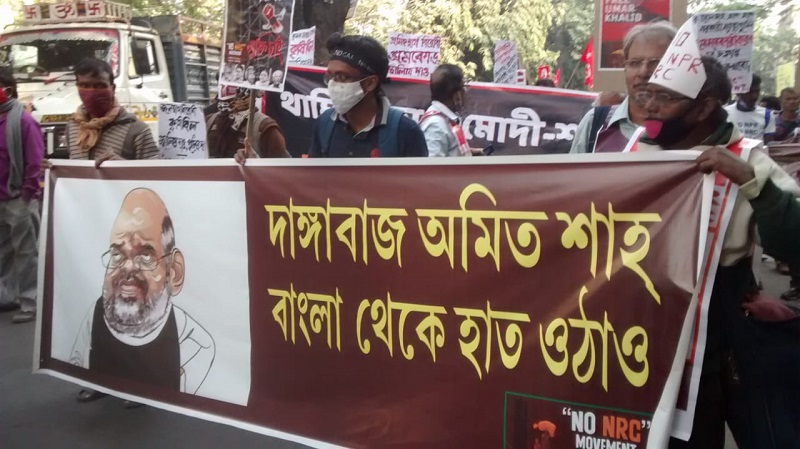 Ganesh, a student of class six, insisted that he joined such rallies because he is opposed to religious divides among his friends and communities in Kamarhati, a class neighborhood of mixed population in the city’s northern suburb. “Our families have been staying here for long and I have muslim friends too. We speak both Bengali and Hindi. Now my Muslim friends are scared that they will be driven out as Bangladeshi. If I can meet Modi, I would request him to stop this divisive politics. Hindu-Muslim-Sikh-Isai must stay together. There is no need for NRC.” the boy said.

Rahiman Bibi and her neighbors like Golapjan Haldar, Jahanara Bibi, Sophia Begum– all domestic help are facing double existential threats for being the poorest of the poor and belonging to minority religion. “Sometimes, we had to beg on streets during the lockdown period as flat-baris (middle class apartments) denied entry to domestic help. Our bustee landlords are threatening to evict us as we failed to pay rent. On the top of all these troubles is the threat to kick us out of Bengal as Bangladeshi just because we are Muslim. But we are no less Indian than Modi-Shah. This is our ancestral home too”, Rahmani said.

All the women in their mid-fifties were furious with the BJP regime under Modi-Shah. “Both are shameless and heartless. They could not provide us food and shelter while compelling our husbands and sons to come back home during the lockdown. Now they are forcing farmers to accept the farm laws. They are ruining the lives and livelihood of the poor like us”, Golapjan added.

All of them were scared of talking as this correspondent asked their names and places. “We know there are reporters who talk to us sympathetically but write against us”, Saphia bibi remarked. “Come what may, we won’t allow NRC to happen in Bengal”, was their common refrain.

The students and middle class participants in the rally carried posters and festoons linking successive legal and administrative moves by the Centre. These included the CAA-NRC-NPR, sweeping reforms in labor laws and farm laws as well as electricity bills and environment related rules in addition to arrests of social activists across the ideological spectrum under anti-terror laws. They raised slogans — Arr korbo na dhan chas, dekhbo sala ki khas (we won’t grow paddy anymore, let us see what these rascals will eat), dharmo noy, bhat de (we want food, not religion), and somosto raj bandir nishorto mukti chai (we demand unconditional release of all the political prisoners). 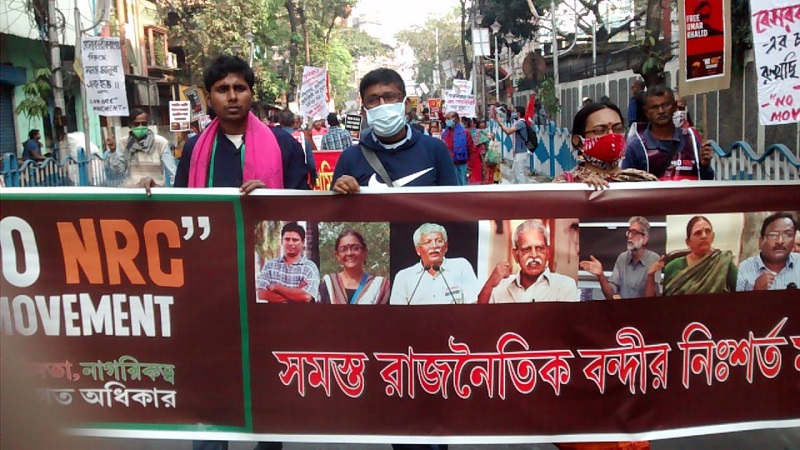 “All these laws are pro-corporate and anti-poor. They are trying to divide Hindus and Muslims in the name of divisive citizenship laws and Love Jihad while wooing Dalits and Adivasis not to join the growing mass protests. Now they are calling Sikh farmers as Khalistani and Pakistani agents or Maoists as they have demanded the release of leading activists of people’s movements. But farmers have not fallen prey to the Sangh Parivar provocations,”  Malay Tewari, one of them, said.

Alluding to Amit Shah’s Midnapore rally, Biplab Bhattacharya, one of the organisers cautioned against the increasing dangers of communal and casteist polarisation in poll-bound Bengal. The rally ended with the burning of effigies of Modi and Shah. 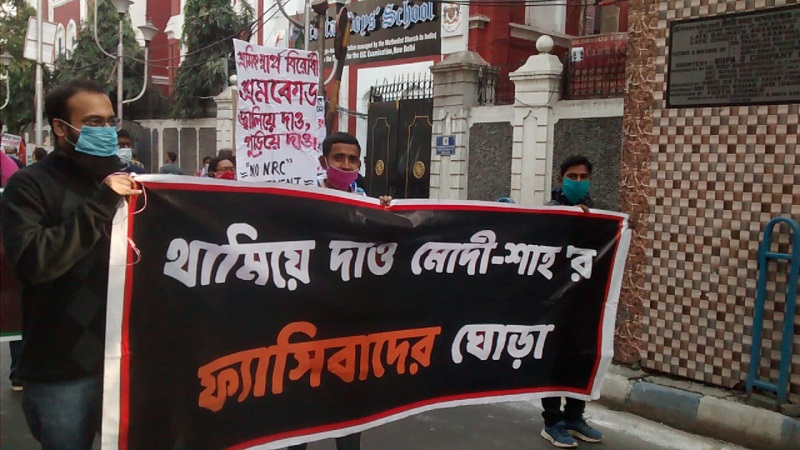 However, some of the participants felt unhappy over the poor turnout in the rally, in contrast to the massive one held last year under the same banner. This is more a reflection of the divisions within the assorted anti-BJP forces in Bengal than the general public mood, they felt. “Unless we stop nitpicking over our mutual differences and pull up our socks ASAP, we will pay a heavy price in the coming months,” a veteran one observed.