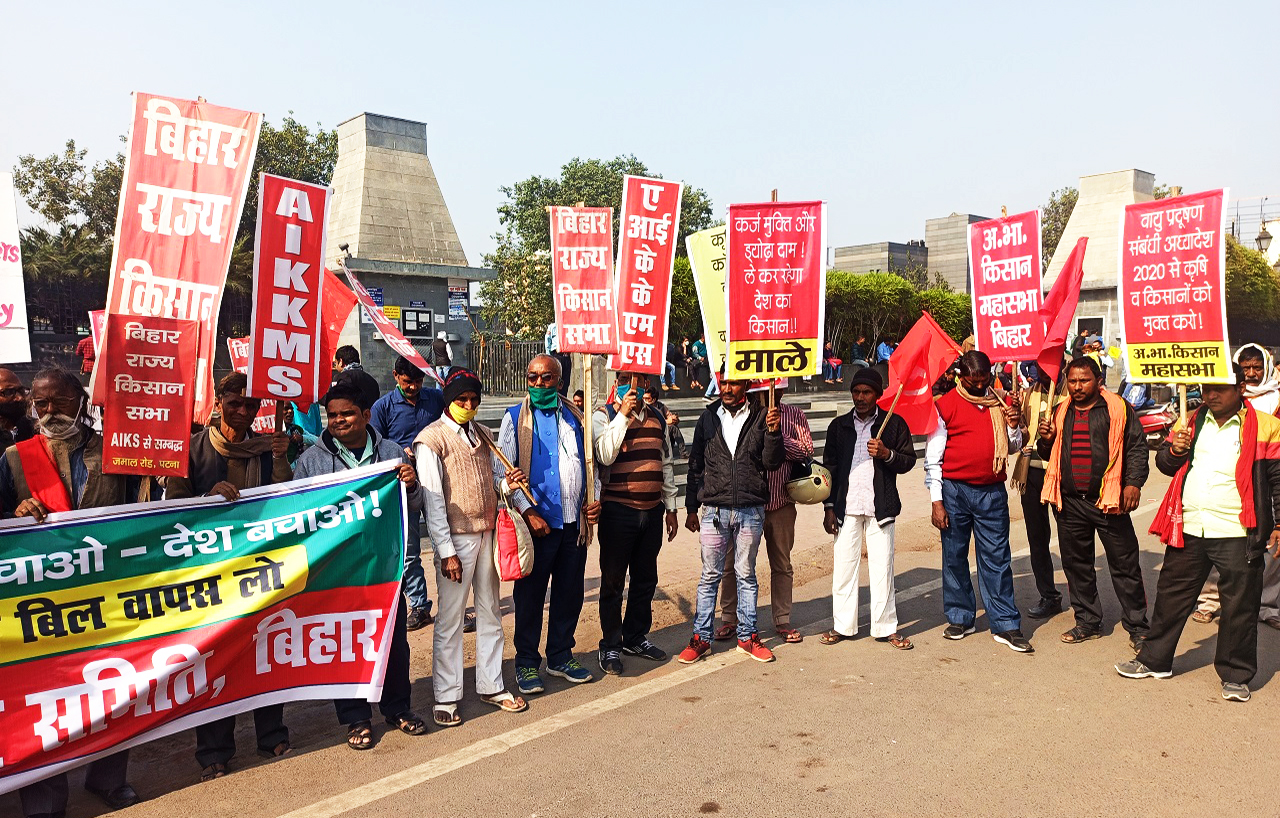 Dismantling of the APMC: The Bihar Experience

In the light of the ongoing peasants’ struggle, and the Prime Minister arguing at various forums, that the Farm Laws enacted by his government will benefit the farmers and the country, it may be worthwhile, to look at and analyse the impact of the abolition of APMC in Bihar in 2006. An article by Anish Ankur.

The impact of abolition of APMC in Bihar

The system of APMC was abolished in Bihar, 14 years ago in 2006. Nitish Kumar’s government repealed the APMC Act in Bihar, months after assuming chief ministership in 2005. It was argued that the abolition of APMC would ensure better prices for farmers in the state and attract larger sums of private investment in developing agricultural infrastructure (cold storages, warehouses etc.) in the state.

A study by the National Council for Applied Economic Research (NCAER) last year, has reported increased volatility in food grain prices in Bihar after the abolition of APMC in 2006. Also, most of the farmers surveyed, reported high storage costs at private warehouses. The report concluded that the farmers in Bihar received lower prices for food grains compared to the farmers in states with APMC. The report explains, what has actually transformed on the ground in Bihar, after abolishing the APMCs.

The findings of the report are in tune with the reality on the ground. When APMC or bajar samiti (In local language) was functional in Bihar, small traders used to show up at the doorsteps of the farmers themselves, to procure rice and wheat. Farmers used to sell their produce to them according to their need. But, after the APMC became dysfunctional in 2006, farmers had to struggle a lot to sell their produce. Ex-Mukhiya of Amhara panchayat and a local peasant leader Anand Kumar narrated the story of the Bihta Bajar Samiti (35 km from Patna)

“At Bihta APMC, traders from a range of about 50 km, used to come here to buy agricultural commodities from the farmers. It was such a vibrant APMC that 50 people used to sit with a calculator so that they could keep a record of sales and manage the accounts. I still vividly remember that the small farmers used to sell their rice and wheat bringing in their produce not only by bullock cart but sometimes even on their bicycle at Bajar Samiti and returning with cash in their hands. But everything changed after 2006 (the year APMC was scrapped). Farmers were never in such a hand to mouth situation at that time. Now they struggle a lot to meet both ends“.

In APMCs, there was a marketing board in which farmers, traders and government were represented and the SDO used to be the executive officer. Although there were lots of loopholes in the management, at least farmers were represented in the marketing body. Whatever little control was exerted on the market through the APMCs, was withdrawn. Farmers were left at the mercy of the market forces which always devalued the price of agricultural commodities. Anand Kumar further added

“Earlier, the marketing committee used to monitor the trade. Sale and other taxes were paid to the government. But after the agr0-market was freed, merchants now weigh only 35 kg instead of 40 kg in one Maund. And there is no one to look”.

After 2006, APMC was replaced by the PACS (Primary Agriculture Credit Society). These are bodies created by the state to procure food grains from farmers at MSP. The report by NCAER stated that the PACS system did not work as it should have. According to the report, farmers told the research team that “procurement operation is limited to a certain amount and time, and these restrictions are considered to be highly arbitrary. Unfortunately, even at PACS, farmers reportedly received a price much lower than the MSP and payments are not made in time after selling their produce at PACS.”

PAC’s are given a target to buy agricultural produce from the farmers, but the government hardly provided them with enough money. Suppose a farmer has sold his produce to PAC, but there is no guarantee when he will get the price of that produce. It may take up to six to eight months. How can a farmer wait for such a long time? A farmer requires money, right after the paddy has been harvested, because a farmer also has to immediately prepare a field for the wheat. How can a farmer be able to sow the next crop without money in hand? Paddy in Bihar has been sold for even less than Rs 1,000 a quintal, almost half the Rs 1,868 fixed by the Centre as MSP. Most of the farmers can’t even recover their costs. It is in reality a distress sale.

Umesh Kunwar ‘Kavi’, a very active farmer and activist in the peasant movement in Bachhwara (Begusrai) region, mentioned the circumstances under which farmers have to sell their crop at throwaway prices under compulsion

“Farmers have to sell their produce, they need cash money for treatment of ailing relatives, for marriage of their daughters and to repay loans of the moneylenders. Money lenders and middlemen just take advantage of this compulsion and buy their crops at a price that is even below one quarter of the prevailing MSP. Farmers spend about Rs 30,000 on cultivating an acre of land, even the investment amount is not obtained from the sale of the produce, leave aside the question of earning profit.”

Initially when PACS came, it worked well for a couple of years. The farmers also got a decent amount of money, but eventually it excluded the small and weak farmers. Food Corporation of India (FCI) now refuses to buy rice from the farmers on the pretext of excess moisture in it. Also, like APMC earlier, the PACS too have become hotspots of corruption. There are reports of people spending lakhs of rupees to get elected to the PACS.

According to Vinod Kumar Jha, General Secretary of All India Kisan Sabha (AIKS),

“the problem with the MSP is that farmers of Bihar do not have any experience of MSP in most parts of the state, therefore, what benefits it will bring to the farmers, they are not aware of. Our major challenge is to make farmers aware of it.” He further added “In Bihar farmers get the lowest price for their produce. Mostly small traders buy the product of the farmers. Farmers are compelled to sell their produce at throw away prices. What the central government is trying to do at the all India level has already accomplished in Bihar.”

We can very well conclude that the abolition of APMC in Bihar has not worked out very well. Farmers are left to the mercy of the traders, who unscrupulously fix a lower price for agricultural produce that they buy from them. Inadequate market facilities and institutional arrangements are responsible for low price realisation and instability in prices. Further, the need for immediate cash also meant, that they were forced to sell at whatever prices that the private traders offered. Also, farmers are being charged market fees in private unregulated markets, even though infrastructures for weighing, sorting, grading and storage are missing.

But why are the Bihar farmers not agitating?

A lot of people are asking a very pertinent question, why is the state of Bihar, which was one of the most important centres of peasant struggle in the past, has been more or less silent, while the farmers of Punjab, Haryana and other states are agitating on the streets against the new Farm Laws, aimed at abolition of the APMC (Agricultural Produce Marketing Committee) among many other things.

We need to remember that unlike Punjab and Haryana, about 97 percent of Bihar’s farmers are either marginal or small — with hardly any surplus left to sell, they do not go to mandis, and are not covered under the minimum support price (MSP). In other words, peasants in Bihar their own issues. According to Vinod Kumar Jha, the peasant movement in Bihar was mostly centred on issues like land distribution and increase of wage for farm labourers. Only now the agenda has shifted from land to the tiller to minimum support price for agricultural produce. But, he added

“Land is still one of the most important issues in Bihar. We have to protect those farmers who got land due to our struggle and fight against their eviction. Now gradually MSP is coming to the center stage of the peasant question. Whatever legal rights the peasants of Bihar have got it was mainly due to the pressure of our movements.”

“There is no denying the fact that we are not able to organise farmers as it ought to have been done. The problem is, the farmers are highly divided across caste, communal and political lines. In the recently held elections, votes were given not on the basis of farmers issue but on caste lines. This is a major hurdle in the way of the farmers’ unity. Farmers are now Yadavs, Bhumihars, Hindus and Musalmans. Another big obstacle we are facing is that the farmers are not aware of the nitty-gritty of the three Acts, leave alone its ill-effects on the agricultural sector. The farmers are in a dilemma about whom to believe — the government or peasant organisations?”

But Umesh Kunwar Kavi contradicted this observation and commented

“It is not correct to say that Bihar did not witness peasant movements in recent times. Peasants have always agitated and protested. Almost in every season, peasants protested during the crop season but no one paid any heed to them. In almost every block and district, farmers have raised their voice for the demand to open government purchasing centres, but the media has never paid attention to them. We have blocked roads and undertook other forms of agitation for a fair price. If you look at reports of district kisan conferences you will see enormous evidence of many such protest programmes. Take the example of present movement. The Punjab-Haryana farmers were agitating for the last three months but no one paid attention to them till the farmers surrounded Delhi.”

It is to be noted that the D. Bandopadhyay Committee, constituted by Nitish Kumar, had also recommended that surplus land should go to the real farmers, who till the land. Land mafia and feudal lords have grabbed most of the government as well as the Bhoodan land. Another prominent issue in the state is land acquisition for various government projects. Communities and individuals dependent on agriculture do not necessarily get adequate compensation for their land.

But despite all of these challenges, including the Corona epidemic, non-availability of train services, Umesh Singh, a prominent leader of Kisan Sabha affiliated to CPIML (Liberation), expressed his conviction that  the farmers in Bihar are gearing up for a determined struggle against these three farm laws. He said,

“On the pretext of the Corona crisis, Narendra Modi has managed to pass these three anti farmer laws to please his corporate friends. This means, now corporate companies will enter into the agriculture sector. It will lead to displacement of farmers. Private traders have been given the license to hoard food grains. It means the government will not procure from the farmers. This will lead to the dismantling of the PDS system. Almost 110 crore of our population will face a food crisis. These black laws are not only detrimental to farmers’ interest but all the poor people of the country. Bihar peasants have started gearing up for the mighty struggles ahead. On 29 December, farmers from all over the state will gather in Patna and gherao the Bihar assembly.”