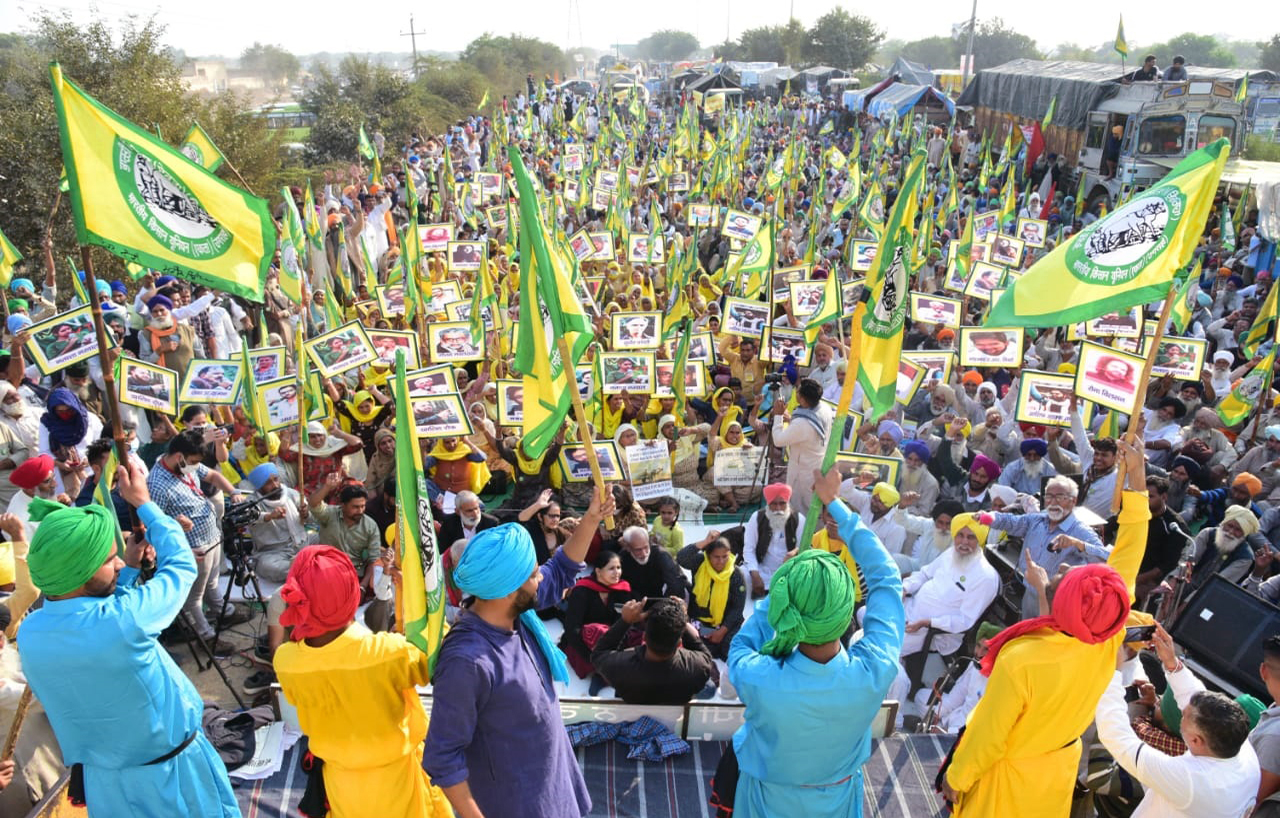 Tikri border near Delhi today witnessed a different kind of celebration of the International Human Rights Day. Thousands of farmers who are pitched there fighting the union government to repeal the pro-corporate Farm Bills, observed the day, demanding the release of all activists put into prison by this government under the draconian anti-terrorist UAPA.

Bhartiya Kisan Union (Ekta-Ugrahan), one of the farmers union spearheading the movement, observed the International Human Rights Day by dedicating it to the imprisoned intellectuals and civil rights activists at the farmers’ protest site on Tikri border. A massive gathering of farmers at Baba Banda Singh Bahadur Nagar (protest site named after a revolutionary by the protesters) close to the Tikri Border demanded that the Modi government should release all the civil society activists, students and intellectuals, who are currently in jail without trial under the draconian UAPA in the Bhima-Koregaon case and the anti-CAA protests that rocked Delhi earlier this year. 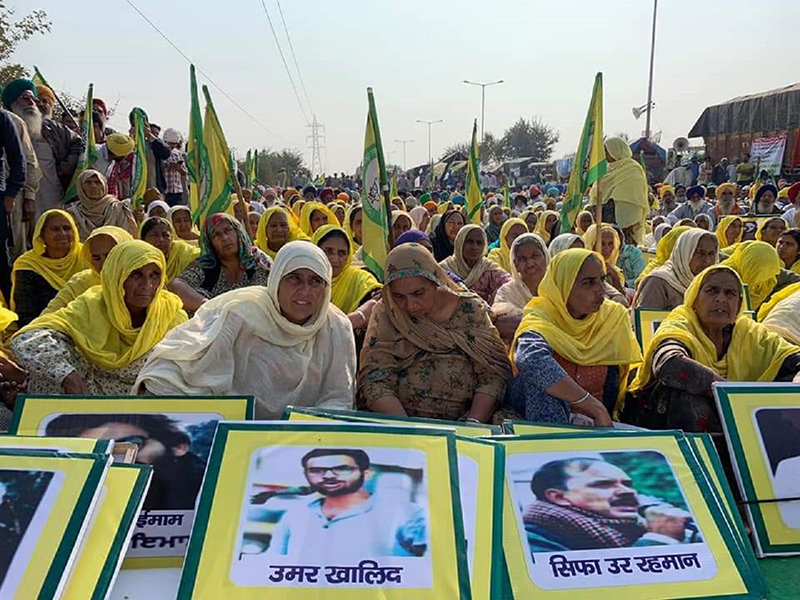 While addressing a rally of farmers who held the photographs of the jailed activists, Joginder Singh Ugrahan, the State President of BKU (Ekta-Ugrahan) said that December 10 was a day to deliver the promise of the right to life, the right to struggle for a better life, and the right to strive to maintain the glory of humankind. Today, the farmers fighting for their rights are celebrating this day. He added that the Modi government had been attacking renowned intellectuals and civil rights activists of the country and had imprisoned them on the basis of false criminal cases. He said, “Pro-people writers and rights activists have been silenced with a repressive campaign. There is an emergency-like situation in the country. Today’s struggle strengthens people’s rights for freedom of speech and expression.” 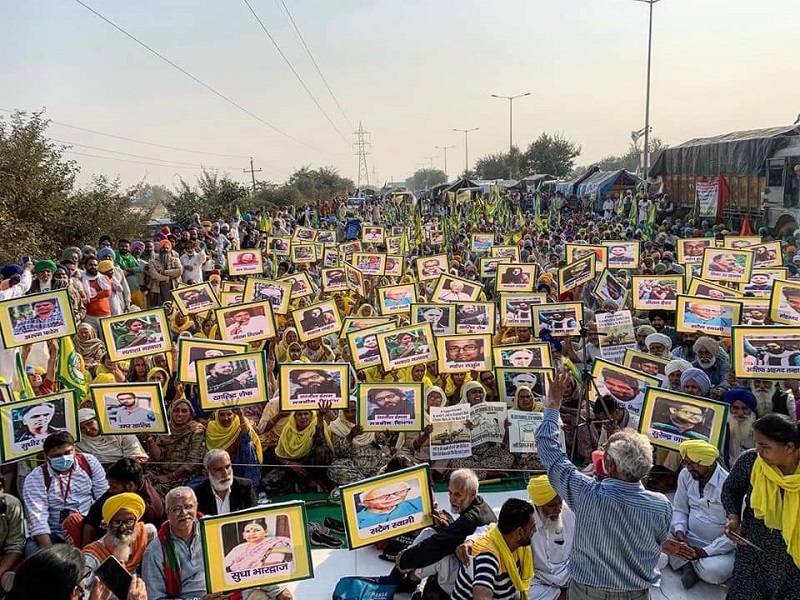 Many activists from civil society and democratic movements joined today’s protest. Nandini Sundar, Professor of Sociology at the Delhi University who had also joined the gathering on the occasion spoke about the condition of the imprisoned activists and intellectuals. 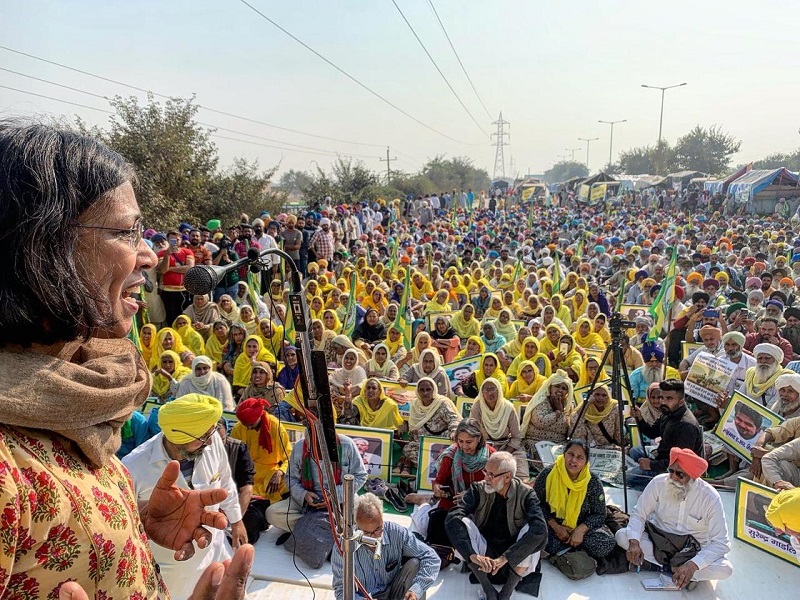 Mahavir Narwal, father of Pinjra Tod activist Natasha Narwal who is currently in jail on charges under the UAPA, also addressed the gathering and shared his daughter’s struggles for democratic rights with the farmers. 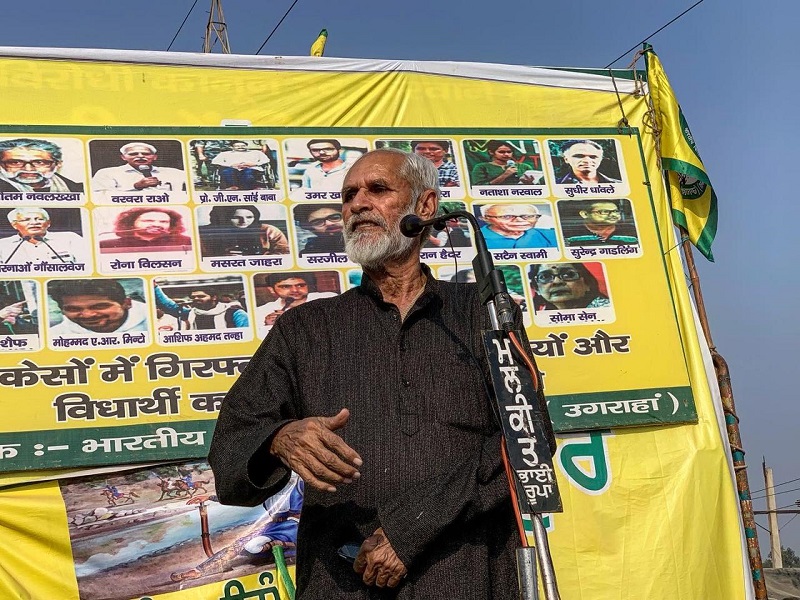 Vimal Bhai, Leader of National Alliance of People’s Movement also shared his thoughts. Dr. Navsharan, daughter of the progressive theatre actor and director Gursharan Singh demanded that all laws that restrict people’s democratic rights such as the UAPA should be repealed.

Amolak Singh, the State President of PLS Manch emphasised the need to strengthen the links between literature and people’s struggles.

Eminent Punjabi thespian, Kewal Dhaliwal who was also present at the gathering to express his solidarity. His troupe ‘Manch Rangmanch’ staged Joginder Bahrle’s opera ‘Hadian-Saunian’ (Rabbi-Khariff) on the occasion.