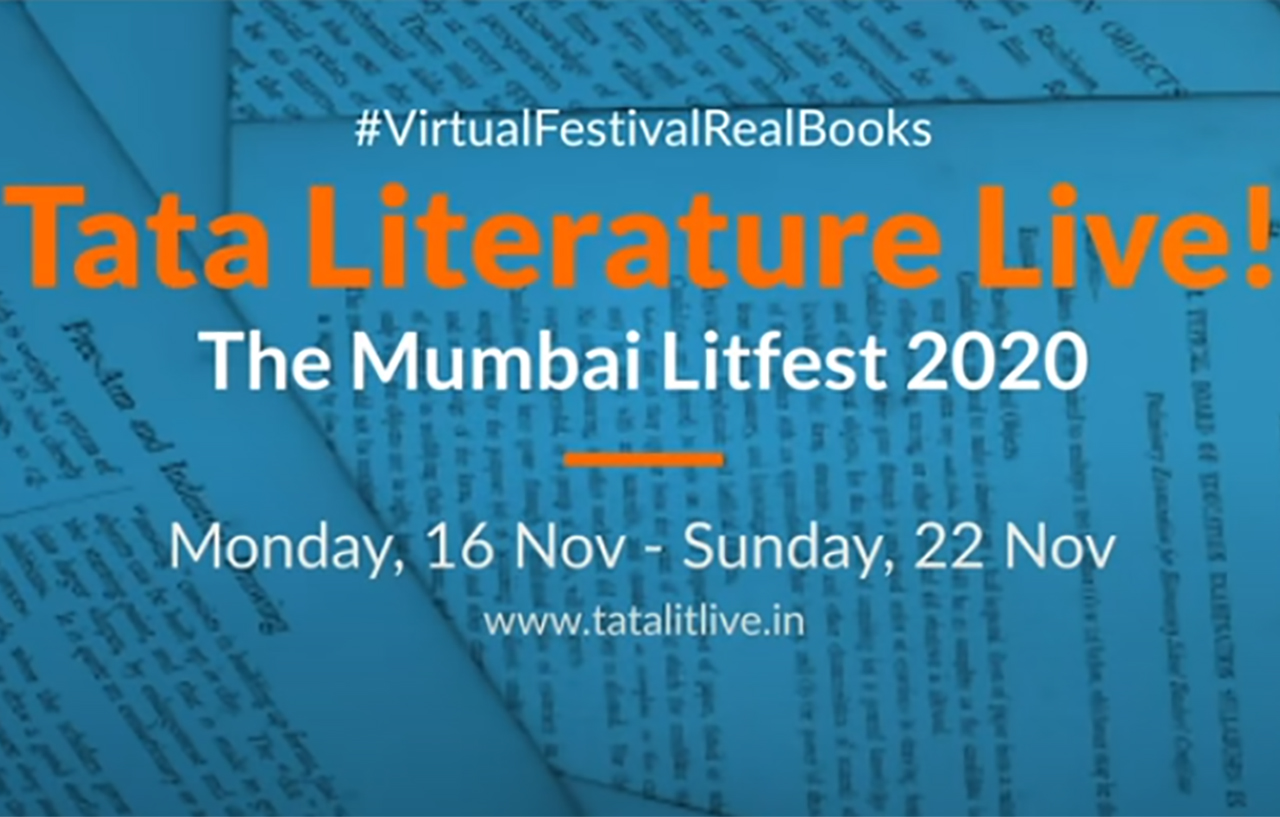 The Eleventh Edition of Tata Literature Live! The Mumbai Litfest has started from Monday, November 16th and is scheduled to continue till Sunday, November 22nd 2020. Activists working in various fields were hugely disappointed to know that PROF. NOAM CHOMSKY —  internationally renowned intellectual-activist — is scheduled to participate in the Tata Lit Live event. They have issued a public appeal to prof. Chomsky to boycott this Tata Group sponsored event as the corporate group has had a long history of forceful displacement, human rights violations and environmental plunder in India. They pointed out that such Literature Festivals and cultural events organised and funded by the Corporates are evidently an attempt to erase their crimes from public consciousness – an ideological whitewashing. A copy of the appeal was mailed to Prof. Chomsky. GroundXero publishes below both the public appeal to Prof. Chomsky and his response to it. 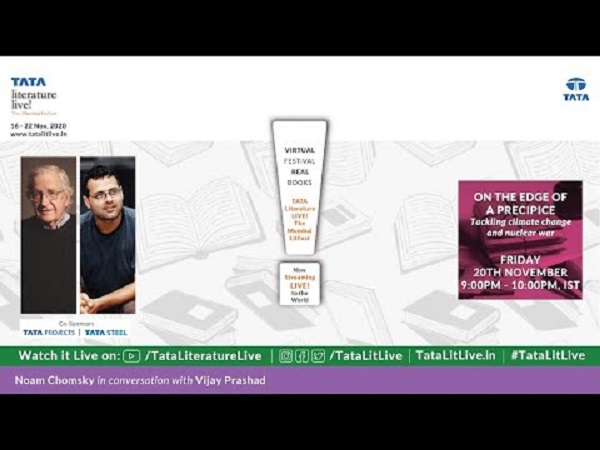 Hope you and your family are keeping well and safe physically in such trying times.

We are writing to you after having just discovered that you are scheduled to participate in the Tata Lit Live event, the annual Literature festival by one of the most notorious corporations in India, the Tata Group.  It comes as a great disappointment to us, as the Tata Group has had a long history of forceful displacement, human rights violations and environmental plunder. The Literature Festival and other such events by the Tata Group are evidently an attempt to erase its crimes from the public consciousness – an ideological whitewashing.

In 2005 Tata Steel’s attempts to forcefully construct its steel plant on Adivasi land in Odisha’s Kalinga Nagar without the consent of the local community and legal permits led to a strong resistance from the community. Ultimately on the morning of 2nd January 2006, Tata Steel forced construction workers to start construction with the aid of several platoons of police. When the Adivasi community resisted the police opened fire and killed 14 people including women and children, and at least a hundred people were critically injured. Civil society investigations revealed that Tata and the police had used land mines as well. From 2006 to 2010 the police, the paramilitary and Tata-backed militias carried out massive repressive measures in the region leading to more deaths, torture, incarceration, sexual violence, socio-economic and medical blockades, till the company managed to grab the land it needed for its steel plant. Even children were not spared and a 12-year-old Adivasi girl of Kalinga Nagar was killed on 31 Dec 2010 by the paramilitary with the justification that she was a hardcore Maoist rebel.

In close proximity of Kalinga Nagar are Tata’s chromite mines in Sukinda valley where chromium hexavalent contamination is widespread. In 2007 a report by the Blacksmith Institute declared Sukinda as the 4th most polluted place in the world. Tata continues to carry out open cast mining in Sukinda despite opposition of the Adivasi people and earlier this year had its mining leases extended by another 50 years. Tata’s presence in the states of Odisha and Jharkhand goes back to more than a hundred and fifty years ago, and since the beginning the company has forcefully evicted Adivasis for setting up its factories and mines. In Odisha’s Chilika the company’s attempt to monopolise fishing has led to brutal repression on the Dalit fishing community. In Odisha’s Chatrapur, Dalit farmers were killed for protesting against its proposed steel plant.

In 2006, the same year as the massacre in Kalinga Nagar for Tata’s steel factory, the company announced its plans for a car factory in Singur, West Bengal. The proposed site was a multi-crop farmland and the source of livelihood for a large Dalit population. The CPM-led state govt unleashed police brutality upon the farmers and forcefully occupied the land. The police and ruling party cadre’s violence injured hundreds of people. A young woman protestor and youth leader of the resistance movement was raped and burnt alive by the pro-Tata CPM cadre.

Tata’s proposed steel plant in Bastar, Chattisgarh also faced widespread opposition from the Adivasis in the region that was suppressed by a private militia called Salwa Judum that was known to be sponsored by the Tatas. The Salwa Judum was constituted by cadres of the Indian National Congress and the Bharatya Janata Party who came together to serve the interests of the corporations. Their violent genocidal campaign against Adivasi dissent led to the displacement of more than a thousand villages, countless deaths and rapes, and ultimately paved the path for Operation Green Hunt, a paramilitary campaign by the Govt of India to eradicate all Adivasi opposition against extractive industries. More than a 100,000 paramillitary soldiers were deployed in the mineral rich Adivasi districts of Odisha, Chattisgarh, Jharkhand, West Bengal, Andhra Pradesh, etc. and India carried out a secret war against its own indigenous people. This organised state military violence continues to this date, and the socioeconomic fallout of this war is going to haunt the entire region for decades to come.

The Tata Group has more than two hundred brands that include steel, thermal power, hydro power, army vehicles, defense systems, etc. It is clearly one of the biggest profit makers from the Kashmir conflict. Tata is also one of the biggest donors to political parties and civil society that ensures smooth operations of its business. The Tata Group facilitated about 75% of the funding for the Narendra Modi-led BJP in the 2019 General Elections. At the same time it also hedged it’s bets as the biggest donor for the Congress party ensuring that whichever party came to power the corporation’s interests would be served.

We want to clarify that we are not calling for an ‘academic boycott’. Boycotting a Tata Corporation platform is fundamentally different from boycotting public/democratic institutions such as colleges or Universities as you yourself have pointed out in several interviews. While talking about boycott-divestment campaigns concerning Israel – you have clearly described corporations operating on the occupied territories as ‘criminal organisations’ and advocated for public boycott of American, French, British corporations. We urge you to treat a corporation such as the Tata Group in the same light. There is a logical problem of applying different standards when it comes to dealing with an ‘Indian Corporation’ today as opposed to an American or a French corporation because the Tata Group is as multinational as any other major world corporation. The only possible argument could be a tactical one – “Does boycotting a corporation like the Tatas harm the interests of disempowered communities in terms of employment generation, etc?” But just a brief look at the statistical data should convince you that the poor in India – a country where 81% of the people are still employed through the informal sector – have had nothing to gain in economic terms from the functioning of corporations like the Tatas. It is in fact quite the other way round.

A corporation that is older than the Indian republic itself, with its origins in  colonial era opium trades has mastered the art of manufacturing a public image of benevolence and social welfare – a typical example of a major corporation ‘manufacturing consent’ in it’s favor. It operates several charitable trusts that make large donations to NGOs and academia thus ensuring there isn’t much public discourse that exposes its organised criminal activities. Events like the Tata Lit Live are designed to solicit the endorsement of credible intellectuals, activists and authors and counter the ‘negative publicity’. You and several other American intellectuals have been vocal about the role of big corporations in undermining both the environment, and democracy – for instance with what is going on in the case of the Dakota Access Pipeline that is being forcefully pushed through American Indian territories. There is absolutely nothing that is morally or ethically different from the role of Indian corporations like the Tatas when it comes to their disastrous industrial projects in Adivasi regions. If anything, the scale of destruction these institutions have caused just in terms of the number of people they have maimed and murdered, is far higher than what would be allowed under the American domestic legal framework.

Therefore we urge you to not become a tool in the Tatas’ propaganda against the Adivasi people of India. And we invite you to consider speaking instead on a different independent/public platform, addressing the role of Indian corporations in destroying both democracy, and environment.

If you believe that refusing to participate in the Tata Lit is the only action that is logically consistent with what you have fought for your entire life, then we also urge you to issue a public statement indicating the same. A statement from someone like you in this regard we think will go a long way to strengthen the absolutely crucial democratic movements of Adivasi and Dalit resistance against criminal corporations like the Tatas. The impact of such a statement, we believe, will be far greater than the effect your planned conversation with Prof. Vijay Prashad (where we are sure you plan to critic big corporations among other things) would achieve.

We thank you for listening, and eagerly await to know what you think about the concerns we raise.

Response from  Noam Chomsky and Vijay –

Thanks for your emails. Could you please forward this to those who have written the appeal?

We are aware of the situation and have decided on the following procedure: