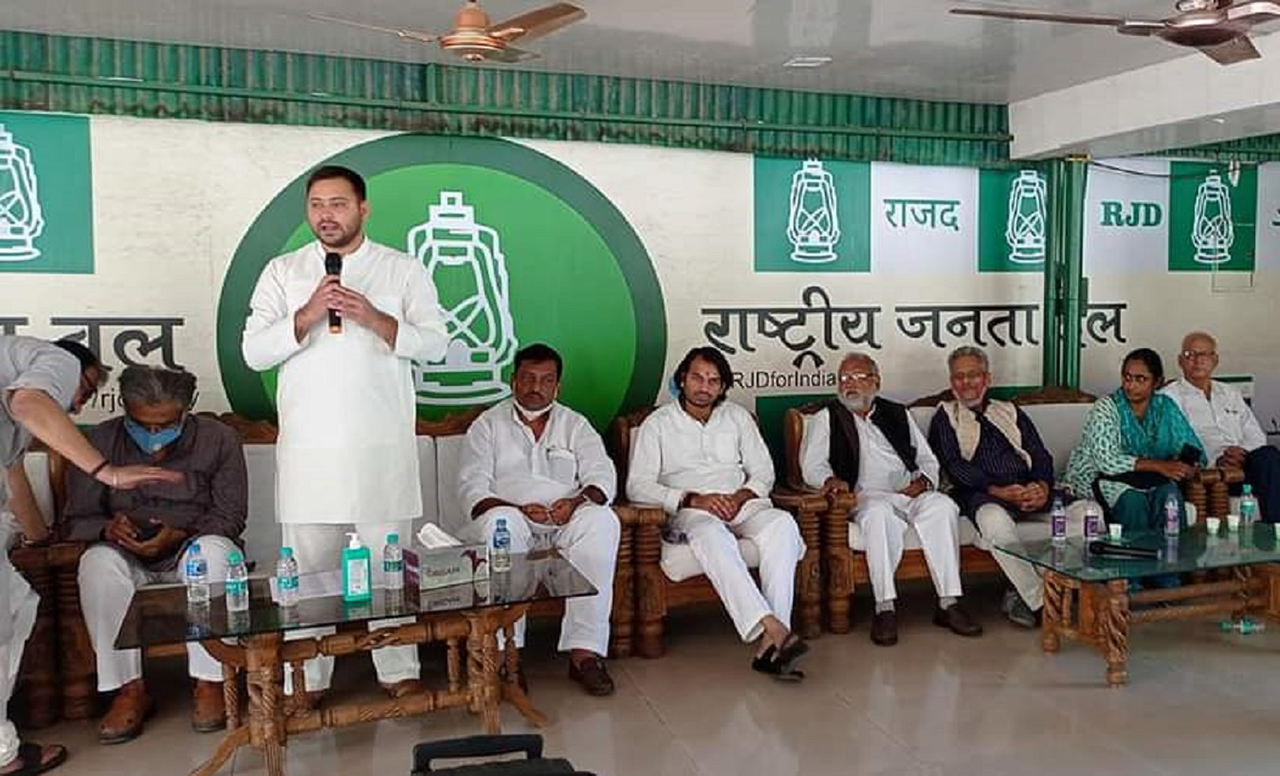 Nitish Kumar will form government amid allegations of rigging

The election in Bihar got concluded amid allegations of rigging during counting, fraud and widespread cancellation of postal ballot votes. After a closed, thrilling and a nail-biting fight, which continuing till late midnight, National Democratic Alliance (NDA) crossed the magic figure of 122, necessary to form government. Most of the exit polls, once again, like in 2015, failed in predicting the real mood of the people of Bihar, writes Anish Ankur from Patna.

On the face of it, Nitish Kumar will become the chief minister of Bihar for the seventh consecutive time. But the way his party JD (U) is feeling backstabbed by LJP, prodded by BJP, how the political situation will unfold in the coming days is difficult to answer. Reports are coming about Nitish being reluctant to to takeover as Chief Minister and there is news of internal fight between BJP and JD (U) on the post of the assembly Speaker.

NDA (BJP-JD (U)-VIP-HAM) returned to power with 125 seats, just three more than the majority mark. The BJP won 74 seats and JD(U) 43 while Jitan Ram Manjhi ‘s  Hindustani Vikas Morcha (Secular), Mukesh Sahni’s Vikasheel Insaan Party (VIP) bagged four seats, respectively. The closely fought election saw the Tejaswi Yadav – led RJD (Rashtriya Janata Dal) emerge as the single largest party with 75 seats, one more than BJP, in the 243 member assembly. But the Grand Alliance failed because Congress could only win 19 out of 70 seats while the Left parties fared reasonably well winning 16 out of 29 seats allotted to them, the largest number of seats they won since 1995.

If we go by the latest data available on the Election Commission site the Grand Alliance polled 37.2 percent of the votes while NDA got 37.3 percent of the total votes. A difference of just 0.1 percent. If we calculate this 0.1 percent then it is around 12,270 of the polled votes. But with this difference of twelve thousand two hundred and seventy votes NDA was able to grab 15 more seats than the GA.

Allegation of rigging in the counting

After being elected the leader of Grand Alliance legislators Tejaswi Yadav, addressed a press conference in which he made detailed allegations about how the rigging has been done by the officials. Tejaswi Yadav said “Election commission has violated its own laid down procedures. According to these procedures postal ballot votes should be counted before the EVM counting. But these votes were counted after the EVM counting got concluded. I want to ask on whose orders these procedures were violated?” He further alleged “You will be surprised to know that more than 200, 500, 700 and 900 postal ballots have been cancelled by the officials. If they got cancelled then who is responsible for that? When our candidates asked for the reason for cancellation then its duty of Returning Officers (RO) to satisfy our representatives.” Tejaswi Yadav demanded the recounting of postal votes “Postal ballot should be counted again in at least 20 seats. Election Commission’s own rules say that the entire process of counting of votes should be video graphed, documented and kept for 40 days and that if anyone challenges it then it should be produced to the satisfaction of the candidates. At a lot of centres counting were completed but certificates were issued to our winning candidates after six- seven hours. At times they have even tried to snatch away the winning certificate. When we complained about it, the election commission asked for proof. How can we produce proof when even mobile phones are not allowed inside the counting centres?”

RJD state president Jagdanand Singh, said “The NDA indulges in deceit to win. But, the people of Bihar stood behind Tejaswi, who has emerged as a leader in his own right as he singlehandedly steered the campaign against the heavyweights of NDA, from CM to PM.”

Initial reasons for the debacle

Now all the poll pundits are trying to analyse why Grand Alliance didn’t perform as expected as predicted by several poll analysts and even exit polls? In the first phase of the elections the Grand Alliance performed very well but from the second phase BJP and JD (U) worked to sort out their differences. Reports were coming after the first phase that BJP social base, instead of voting for JD (U) candidates, are preferring LJP candidates, deliberately put up in the JD (U) seats. BJP didn’t want to lose the EBC, Mahadalit and women voters considered it to be the Nitish Kumar vote-bank, therefore to restore the confidence of Nitish Kumar’s social base it had to announce again and again that Nitish Kumar will be the CM of Bihar in spite of the JD (U) getting less seats than BJP. Advertisements of Nitish Kumar were published jointly with PM Narendra Modi. In the third phase women voters came out in large numbers in comparison to the first phase. In this phase like in Seemanchal, Mithilanchal and Koshi regions wherever women voting percent crossed men voters by 10 percent NDA got benefitted. Nitish Kumar liquor prohibition policy, reservation in PRIs and provisions of Jeevika Didi must have played their role.

But the most decisive loss to GA have been in the Muslim dominated Seemanchal districts like Kishanganj, Purnia, Katihar and Araria. Here Owasi led AIMIM is accused of being the game spoiler. AIMIM fielded 14 candidates out of the 24 assembly seats it contested in Muslim dominated area. It won only 5 seats but was instrumental in the defeat of Grand Alliance candidates in more than dozen seats. In the third phase, out of 78 seats NDA managed to win 52 seats.

As mentioned in the ‘Groundxero’ earlier reports several Muslim organisations of Kerala origin like SDPI, IUML, AMP has fielded candidates and although they got only few hundred to thousand votes but in a tightly contested Bihar election battle it favoured the NDA by denting the traditional vote bank of GA. In the same way GA performed badly in those area which was considered to be its stronghold — Muslim-Yadav (MY) areas. Commenting on the results in Seemanchal districts Bihar general secretary of PUCL said “Political canvassing of BJP and AIMIM was same. Blame will be on Congress because they did nothing for the minorities. Most of the AIMIM leaders like Akhtar-UL Iman were previously in the RJD. RJD and Congress took the minorities for granted. It’s a very unfortunate thing. BJP wants Owaisi to be in the opposition.”

According to social activist Ghalib Khan “In these areas AIMIM and other Muslim parties campaigned not against NDA but against secular parties like Congress and RJD. Their campaign centred round the question of representation, that these secular parties like RJD and Congress treated minorities as their vote bank but never showed real concern about their issues. They were mum on BJP-JD (U). It is very unfortunate that people of Seemanchal have voted for communal Owaisi instead of parties   which produce secular personalities like Mahboob Alam (CPIML-Liberation) and Shakeem Ahmad Khan (Congress).”

Commenting on Owaisi’s politics noted RTI activist of Araria (in the Seemanchal district) Ashish Ranjan said “Instead of defeating NDA, AIMIM politics defeated Grand Alliance. What did they gain from this?”

Anish Ankur is a freelance journalist based in Patna.