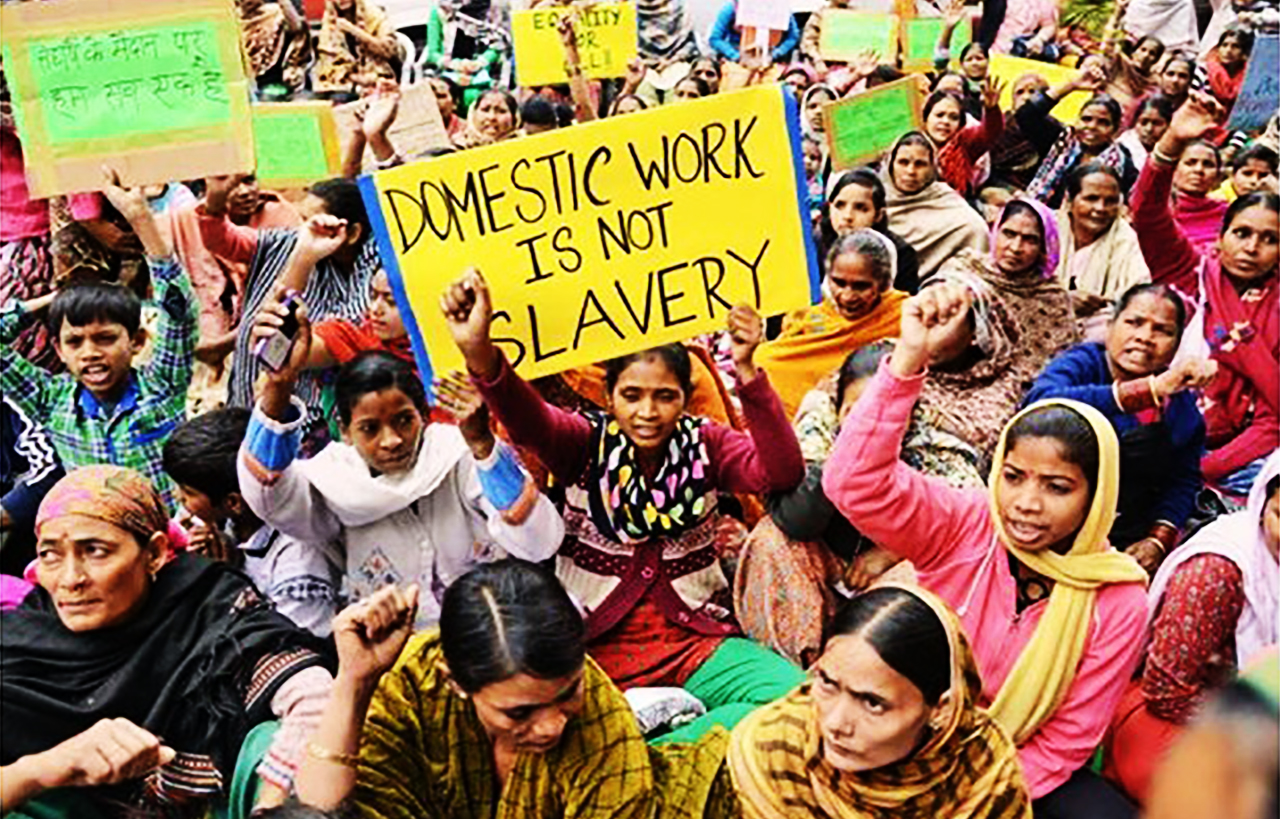 Domestic Workers’ Condition and Struggle During Pandemic in Maharashtra

The article was originally published under the title – Domestic Workers in Maharashtra in the High Court – in Mainstream, Vol LVIII no. 45, October 24, 2020. We are republishing it with the permission of the author.

It is by now widely acknowledged in many circles that domestic work is work that is crucial to the maintenance and reproduction of society and yet is the most neglected area of work and is not even officially recognised as work. In the recent pandemic, while some work like that related to the health care sector was at the forefront of social and economic life, other work like auto or garment production almost ground to a total halt all over the world. One sort of work that was slowly and steadily continuing in the background was, in fact, the work of cooking, cleaning, washing, sweeping and swabbing, childcare, elderly care and so on, work that was carried out mostly at home, mostly by women.

During the sudden, ill-prepared lockdown that was imposed in the country following the COVID-19 pandemic, when almost a curfew-like situation, whereby most people, barring those termed working in `essential services’ were confined to the place they found themselves in. While the work of cooking, cleaning, washing, sweeping is essential work, the employment-related to that work — that of domestic workers — was not deemed `essential work or services’.

In this period, there seemed to be a lot of messages and memes circulating about how the `most missed’ person in middle class households was the `maid’, the domestic worker.

It is only now that the trials and tribulations of this section of workers is being gradually documented — what was happening to domestic workers in these 4 — 6 months when they were finding it impossible to go to work and many of them had not got paid in most of those months and still many were not sure when and whether they would be able to go back to work and retain their tenuous job.

One of the documentation that has been done in the state of Maharashtra is by National Domestic Workers Welfare Trust that works in almost all the districts of the state. The Trust also works in conjunction with the Maharashtra State Domestic Workers Union. The Trust was able to look at the situation of the 5578 domestic workers in Mumbai, Thane, Pune, Sangli, Kolhapur, Ahmednagar and Nagpur in the month of June 2020. The situation would have aggravated in some areas like Mumbai and Thane where transport has not started yet; it might have been less so in other areas where domestic workers do not travel for long distances to go to and from work. This still needs to be looked at.

According to the Government of Maharashtra, there are 4,46,892 registered domestic workers in the state. Most of these workers are not organized in any trade union or similar organization. However, over the last several decades, there have been attempts by several trade unions and NGOs to organize domestic workers. These attempts began in the early 1980s in Pune which evolved into a very strong Pune Shahar Molkarin Sanghtana. Since then, almost every city and small town has seen the emergence of organizations of domestic workers. This has never been an easy task as the employment status of domestic workers belongs to the highly precarious category. There is no employment letter, nor any document to indicate who their employers are, how long they have worked in those households, what their wages are, whether they have been given bonuses, holidays, leaves, sick pay etc. This is something middle-class employees take for granted about their own employment and would be horrified if asked to work with those working terms and conditions. Yet, there seems to be a vibrant movement in several parts of Maharashtra.

Even so, what the Trust found in the survey results was quite an eye-opener. The report states:

Thousands of domestic workers who were working for years in certain families and were like family members of those families became strangers with the announcement of locked down. They became outsiders and not allowed to enter the buildings. They even could not go to get the wages of the work done. Some lost their only source of income in one night. Though they were willing to work it became impossible for them either because buses, railways and other transport facilities were closed down, or the households they were working for did not allow them, or there was a restriction on outsiders entry in their buildings or some of them lost their own jobs so they did not want domestic workers to work in their house. Whatever the reason may be, but thousands of domestic workers lost their jobs and their only income source for an indefinite period, as there seems to be no real end in sight.’

Very few of them had any savings. The few that did have some savings soon ran out of those. Many of them did not have a ration card; some had ration cards at the place where they had lived earlier and there was no way they could go there. While the Trust tried to mobilize some rations for some of them in very dire situations, that was hardly enough to get them by for such a prolonged period of time.

The survey results bring out this reality in a stark manner.

Some of the other issues the report brings out is that out of the 5578 domestic workers interviewed, 1840 i.e.33% have completed the age of 60 years old and have no option but to work as domestic workers. Also that, 2580 workers i.e. 46% live in rented houses and have been having difficulty in paying their rent. As referred to earlier, 43% i.e. 2393 domestic workers in the survey did have not ration cards and hence could not get ration during this crucial lockdown period. Sixty-six percent i.e. 3688 domestic workers in the survey were facing problems in terms of being able to continue education of their children as they were unable to pay the fees required to get them enrolled in their next academic year. This survey does not address the caste of the women domestic workers. But it is common knowledge that a large proportion of domestic workers come from extremely disadvantaged sections of society, mostly from the oppressed castes and communities. The lower one is in the caste hierarchy, the greater the burden of every calamity and disaster, whether manmade or otherwise.

After the survey the union discussed a series of demands to that the domestic workers had of the State Government.

The main demand is a relatively simple one. Maharashtra has a legislation specific to domestic workers. It has been termed as a `welfare legislation’. That is the Maharashtra Domestic Workers Welfare Board Act, 2008. This Act has a section, section 10, which says that: Other benefits will be decided by the Board from time to time (g) as stated in section 16, the Board can raise finances and manage those in order to implement the provisions of the scheme, (h) the Board can appoint a Secretary and other officers and employees in order to effectively implement these provisions. The domestic workers and their unions feel since the Act facilitates `the Board to decide on other benefits from time to time’, what would be a better time than that of a global pandemic and the subsequent unprecedented national lockdown that has hurt the informal sector workers so badly has hit workers so brutally? This is the time that section 10 has to come into force and a special scheme has to be devised that will give the domestic workers a breathing space. The Rs. 10,000/- per month per worker till the situation is normalised could come out of the Fund created out of a scheme devised under this Section 10.

There are precedents for this. The Maharashtra Building and Other Construction Workers Welfare Board has announced a sum of Rs. 5,000/- per construction worker, in two instalments.

The Kerala Revenue and Disaster Management Department had put out a notification on the 11th of April 2020 that they had sanctioned a sum of over 85.05 crore for a scheme that would allow for the disbursement of an immediate ex-gratia payment to many sections of informal workers, including fishers, scavengers, small traders, cine workers etc. This was announced just over a fortnight of the nation-wide lockdown. It is over 6 months after the lockdown was imposed. It is high time some such measures are taken as soon as possible.

The other demands of the domestic workers are:

Some of the unions have come together to fight for their demands. Some of them have sent postcards with their demands printed on them to the Labour Minister and Chief Minister of Maharashtra. They have gone on the streets to draw the attention of the Government to their desperate pleas and their demands. Now two unions, Maharashtra Rajya Ghar Kamgar Union and Sarva Shramik Sanghatana, having petitioned the Government of Maharashtra, together have filed a petition in the High Court of Bombay. Being one of the most vulnerable sections within the informal economy, which has an even more precarious existence with the new labour codes that excludes almost all informal sector workers, domestic workers have no choice but to knock every door they can perceive and struggle at every frontier they can conceive of.

Sujata Gothoskar is a Mumbai-based activist who has worked for the rights of women workers in the unorganised sector for many years.